I received a new DVD called “When Calls the Heart – The Dance” movie from Elliott with Edify Media, Inc. and was asked to watch the movie and post a review on my blog about it.  I had already seen the the other “When Calls The Heart” movies before this, and love them, you can find my review on the first one here, the 2nd one here and the last one here.

These are just the type of movies that you see the title and know you’re going to love them.  After seeing a few in the series, I’m just hooked and now cannot wait for the next one to come out!!  With the way this one ended (I won’t blow it for you), I see things happening with 2 of the main characters that will be so wonderful in the next movie.  Not sure what they will have it be about, but I absolutely love the stories and people behind these movies.  Some questions I have with this one are, “how are the babies?” and “did the crazy guy who’s running the town hire those miners for a bad reason?”.  I guess I’ll just have to stay tuned to the next DVD to see if any of these are answered.

I so wish that these movies would become a series on a channel that I receive.  With our DISH package, we don’t get Hallmark and I so wish that we could.  All in all, I absolutely love these stories, how they are appropriate for families and not focused on any certain age, group, etc.

When Calls The Heart – “The Dance” 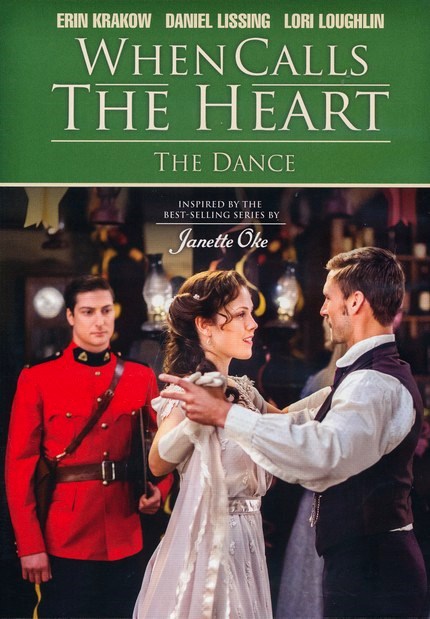 Nashville , Tennessee-  When Calls the Heart, Produced and directed by Michael Landon Jr. and inspired by the best-selling books by Janette Oke, tells the story of Elizabeth Thatcher (Erin Krakow), a young high society woman, working as a teacher in a prairie town in the Western Frontier. When a group of bachelor minors come to help reopen the mine, the local Mounty. Jack Thorton (Daniel Lissing), finds himself in competition for Elizabeth’s affections. When items start disappearing from the town, Jack is immediately suspicious that his rival might also be a thief. Also stars Lori Loughlin as Abigail Stanton, a widow and mother whose husband, along with a dozen other miners, was killed in an explosion at the local mine.

Synopsis- New miners arrive in Coal Valley to help with the final stages of reopening the mine and the town decides to celebrate with a dance at the end of the week. One of the new miners, Billy Hamilton has taken a special interest in Elizabeth and she is flattered by the attention. Meanwhile, pregnant widow Carla Noonan has moved in with Abigail and Elizabeth so the women can keep and eye on her for the remainder of her pregnancy. As Elizabeth and Billy’s relationship develops, Jack becomes suspicious of Billy’s motives for pursuing Elizabeth so persistently.

Brian Bird- Writer/Producer : Brian Bird is co-founder with partner Michael Landon, Jr., of Believe Pictures, a film and television production company. He was co-executive producer and writer on the successful television series, Touched by an Angel. Adding to Brian’s success, he had also written and produced episodes of Evening Shade, Step by Step and The Family Man. Most recently, Bird wrote and produced Gametime, a two-hour television pilot for NBC, The Shunning, inspired by the novel by best-selling author Beverly Lewis, for the Hallmark Channel, and Not Easily Broken, adapted from the novel by T.D. Jakes and released theatrically by Sony/TriStar.

"When Calls The Heart - Change of Heart" - Tiger Strypes Blog

[…] I received a new DVD called “When Calls the Heart – Second Chances” movie from Elliott with Edify Media, Inc. and was asked to watch the movie and post a review on my blog about it.  I had already seen the the other “When Calls The Heart” movies before this, and love them, you can find my review on the first one here, the 2nd one here,  the 3rd one here, and the last one here. […]

I have been known to seem a little standoffish around people that I do not know. Unfortunately, I have always been shy. My husband pointed this out to me and I am still trying my hardest to correct that.

[…] got an email to review “The Perfect Summer” along with the latest “When Calls The Heart” from Elliott.  I always reply with a big YES!! to let him know I’m interested.  I […]

I cant recall a time but I am sure there has been some in my life. Sounds like a great wholesome movie.

The Dance sounds like a wonderful story. I think that Michael Landon Jr. has all the talent of his late father, so I would love to see this film. Thanks for sharing it!

I am still playing catch-up on the When Calls the Heart series. But the few episodes I have watch, have been wonderful. I know The Dance will not disappoint.