I received the “When Calls the Heart – Lost & Found” movie from Elliott with Edify Media, Inc. and was asked to watch the movie and post a review on my blog about it.  I had already seen the first “When Calls The Heart” movie, and loved it –  you can find my review on that here.  I loved the first movie and it was something I was so excited to find out that might become a TV series.  I grew up in the “House on the Prairie” days and always loved those shows.  Wholesome, family friendly and thought provoking.  There is so little of that in today’s world.  I have to be so careful with shows that are on TV, and movies that we watch, because in today’s society, the bad words and inappropriate behavior are like the norm.  Well, in my family, we try hard to not make it that way.  Movies like this have a story to them, something you can talk about as a family and even learn from.

This movie seems to be a carryover from the first, however, it was weird how some of the stuff didn’t match the ending of the first one.  There was a different “Mountie” in the first movie that was actually there at the stage coach robbery.  In this one, he wasn’t and isn’t there.  Kind of weird, but that is nothing that takes away from the meaning of the film.

I love the story of this one and the cast is amazing.  I told my husband that it reminded me of my Grandma (I call her Nan – since she is from Wales).  In this movie, the women actually take the reigns to work in the mine to save their property, which many thought was a weird deal.  I remember Nan telling me that when the men got called to war back in the 40’s or so, the women had to take over in a bomb factory and other places that were left empty.  Really hit home to how these ladies were and are such strong people in society!

There were many parts that had you laughing, some brought me to tears, but all in all, this movie was a amazing and a great addition to the “When Calls The Heart” series.  I so hope that DISH Network will start airing these shows if they become a series on TV.  I love them!!

When Calls The Heart – “Lost and Found” 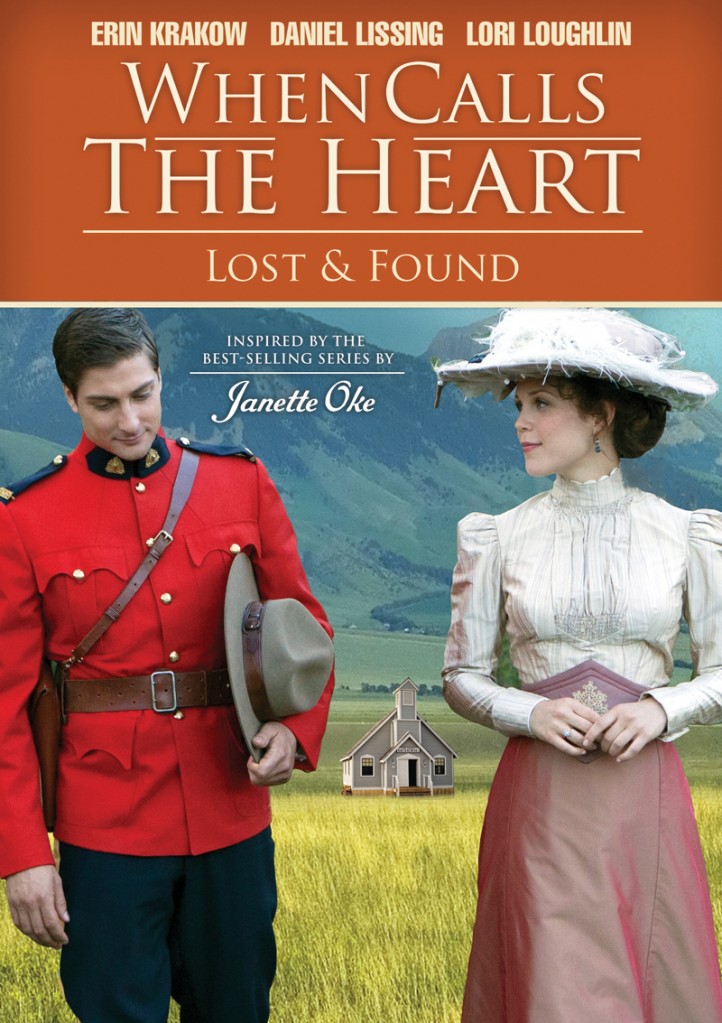 Nashville , TN – When Calls the Heart, Produced and directed by Michael Landon Jr. and inspired by the best-selling books by Janette Oke, tells the story of Elizabeth Thatcher (Erin Krakow), a young high society teacher receiving her first classroom post in a prairie town in the Western Frontier. Also stars Lori Loughlin as Abigail Stanton, a widow and mother whose husband, along with a dozen other miners, was killed in an explosion at the local mine. When Calls the Heart- “Lost and Found” is a feature length film from the first two episodes of the When Calls the Heart television series. The When Calls the Heart television series debuted on the Hallmark Channel to more than 3 million viewers, making it the No. 2 for the night on all of cable for the primary telecast at 9 p.m and No. 3 overall in households. Distributed by Word Entertainment, The DVD will be available to purchase in Christian Retail February 25th, 2014.

Synopsis- “When Calls the Heart” tells the captivating story of Elizabeth Thatcher (Erin Krakow), a young teacher accustomed to her high society life, who receives her first classroom assignment in Coal Valley, a small coalmining town where life is simple, but often fraught with challenges. Lori Loughlin plays Abigail Stanton, a wife and mother whose husband, the foreman of the mine, along with a dozen other miners, has just been killed in an explosion. The newly widowed women find their faith is tested when they must go to work in the mines to keep a roof over their heads. Elizabeth charms most everyone in Coal Valley, except Constable Jack Thornton (Daniel Lissing) who believes Thatcher’s wealthy father has doomed the lawman’s career by insisting he be assigned in town to protect the shipping magnate’s daughter. Living in a 19th century coal town, Elizabeth will have to learn the ways of the frontier if she wishes to thrive in the rural west on her own.

“A TERRIFIC SERIES FOR THE ENTIRE FAMILY”
-Dove Foundation

No, I’m pretty much my own person. Some would say the freak of the family, I’m sure.

I have seen this first episode in the tv series and I absolutely love it! Silly ATT Uverse does not offer Hallmark channel, so I can not watch the tv show on the actual tv, but I do plan to catch up eventually. I love that there is a show like this on tv I can feel comfortable watching with my young daughter!

Yeah Cristi – DISH doesn’t get it either with the plan I have and I’m not paying more than they are already drilling us for to get only a few channels that I want – sure wish you could pick from a list, you know? I love this series, too – and I agree with you, it’s about time we can watch as a family!

I have my grandfather’s weird sense of humor.

Very intriguing. I love these old time movies. They are kind of my drug of choice. Nice connecting with a new blogger.

Thanks for stopping by Christina – I headed over to your blog and clicked on the follow links!! Hope to see you again!

Oh, I’m a LOT like my mom! Fierce and a fighter, but I wasn’t that way for a long, LONG time…until I had my own kids. I like to think I’m honoring her memory when I’m like that!

In most ways I am quite different from my family, but I get my organizational skills from my Dad!

I might need you to give me a class on that!! ha/ha

Oh, I just love period films like this! Thanks for the review, this looks like a good one 😉

Also, I definitely feel like I take after some of my relatives, mostly just looking like my mother so much and her mother as well!

Well Tabitha, then your Mom & Grandma were obviously beautiful as well! 🙂 Thanks for the post!

I take after my grandma with my frugal ways