I recently heard from the amazing Elliott from Edify Media, Inc. about a new movie called “Virtuous” that will be coming out in June of 2015.  It stars Erik Estrada, and from the reviews, looked to be a great film.  Who doesn’t remember the good old “Ponch”?  His acting has always been great, and any time I see him on TV, it makes me smile.

The “Virtuous” movie was about a woman, who had a pretty rough life (as well as past), and was wrongly accused for a crime that was actually committed against her.  Due to the person who committed the crime being a well-known rich guy’s son, things got a bit tricky.

There was a great story to go with “Virtuous” and actually had many different personal stories that pertained to many of the characters.  It let you learn from each one, and what they were dealing with in their own lives, and see how with God, all things can become new.  Too many people in today’s world are either falsely accused of things, or don’t have the courage to stand up against those that are doing wrong in this world.  If you see something that you know is illegal, incorrect or unsafe, then say something!  Witnessing something and keeping your mouth shut, in my opinion, makes that person guilty, as well, in some circumstances.  I know everyone is afraid of being sued, or being hurt, but I always want to put the person who is involved in a place of being a friend, or family – would you keep quiet then?

The end of the “Virtuous” movie was wonderful, and really makes you wonder what happened to certain characters after the credits. 🙂  I could definitely see a part 2 of “Virtuous“.  It would be great to go even further with the stories of the characters involved!

“Virtuous” is a movie, with some topics that really aren’t for young children, but like us  watching it with our son (who’s 14), or if you have kids around his age, it could really open up some conversation about life in this world, what people have to deal with, and what’s the right thing to do!!  It would really be a great one for a youth group to watch, and have a bible study that goes with it, for things of this world that pertain to the topic.

Thanks Edify Media, Inc. for letting me view this great film with my family!!  The characters were great and the story really makes you see that there are still people in this world that care. I definitely recommend this movie. 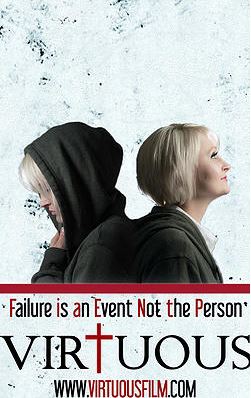 “A GREAT FILM ABOUT DEALING WITH ADVERSITY AND OVERCOMING IT.” -Governor Mike Huckabee

“INSPIRING AND COMPELLING!”  -The Dove Foundation

Los Angeles, California- Erik Estrada stars as Jack Evans, an attorney still grieving over his deceased daughter when a former drug addict, Simone Burner (Brandy Allison), seeks his help to defend her in a murder trial. Simone is accused of killing Patrick Walters (Ben Davies, “Courageous”), a young man from an esteemed and wealthy family. Simone’s claim of self-defense is overshadowed by her troubled past.

“Virtuous” brings the principles of Proverbs 31 to life. It showcases that woman can be both righteous in their lifestyle and gritty enough to defend their convictions. Featuring a female-led cast that includes Angelita Nelson (“Courageous”), Erin Bethea (“Fireproof”), Vanessa Ore (“My Name is Paul”) and American military hero, Jessica Lynch. Virtuous takes us on a journey through the hearts and minds of women’s struggles for redemption, salvation and God’s transformative love. “Virtuous” is available for pre-order at Amazon and Walmart today, and releases nationally on DVD June 2nd. For more information or to see the trailer, go to www.virtuousfilm.com.

Synopsis:  When a young woman, Simone Burner (singer/songwriter, Brandy Allison), is accused of murdering the man who assaulted her, she seeks out the helps of attorney Jack Evans (Erik Estrada, TV’s CHiPs) to prove her innocence. A ruthless and corrupt prosecutor engages her in a trial that brings the past she’s longed to escape to the forefront of her defense. “Virtuous” will inspire and ignite you to live the principles of Proverbs 31 –faith, integrity, wisdom and honor.

About JC Films:  JC Films exists to engage our culture through superbly produced faith-based feature films. Our goal is to assist churches and non-profit organizations to spread the word of Christ through movies, and in turn change lives and preserve culture. We are hands-on filmmakers that build our art from the ground up, including writing, casting and producing. In addition, we conduct nationwide free church screening programs as ministry outreach. Current films include “Finding Faith,” “Virtuous,” “Uncommon” and new productions, include “One Church,” “Rootin’ 4 Regen” and “Nail 32.” For more information about our church screenings or DVD projects, please visit JCFilms.org and follow us on Facebook at JCFilmsPresents.

***************************************
Disclaimer: I, Jamie Tomkins, own and operate TigerStrypes Blog located at www.tigerstrypes.com. From time to time you’ll hear about my real life experiences with products and/or services from companies and individuals. Let it be known that I have no affiliation with these said companies, and have not received compensation for reviewing their service/product. The service/product was given to me by the company or any agents of the company. The review that I give regarding the product/service is based off my own personal experience; I do not guarantee that your experience will be the same.
12 Comments
Newest
Oldest Most Voted
Inline Feedbacks
View all comments

I always stand up for people, wrongfully accused or just not able to speak for themselves.

Good for you!! We need more people like that in this world. Too many are afraid of what might happen. :p

What a great storyline! This would be a film I’d love to watch. I agree, I think sometimes not saying something about a wrongdoing can make that person guilty, too.

I love Christian movies! My husband would like this one too

It does have a great story to it – and one that can bring on a conversation, which is good!

I trust my family, and will stand by them. sound like a good film,

This sounds like a good movie for a family movie night. We are in our rainy season here, so we always need good movies to watch lately!

I was getting intrigued by the preview. Sounds like a great movie based on your review and yes I love Ponch as well! 🙂

It was really great to see him acting again!! Rode on a motorcycle for a bit to keep it real!! 🙂

I have stood up for my son when some girls were accusing him.

That’s great Tara – we always need to stick up for family!