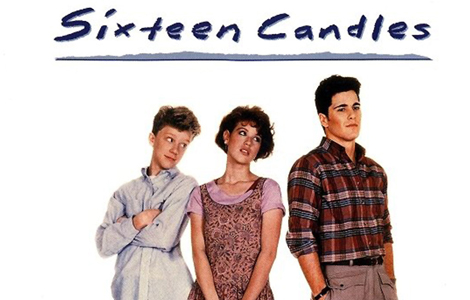 For this week’s “Things That Bring Back Memories” post, I am going to pick something in the topic of “Movies” and go with Sixteen Candles.  This was a movie from 1984, and was kind of like a coming of age movie.  It had parts that almost all of us in high school had gone through, or were going through.  We all knew those nerds, or guys that had high end cars, and just didn’t know which was to look.  The story had some parts that amazes me that back then, our parents let us see, but in today’s world, it seems like nothing.

For those of you, who are either too young, or just don’t remember it, here’s the preview of the Sixteen Candles movie:

Do you remember the Sixteen Candles movie with @MollyRingwald & #AnthonyMichaelHall? Find out more at #TigerStrypesBlog Click To Tweet 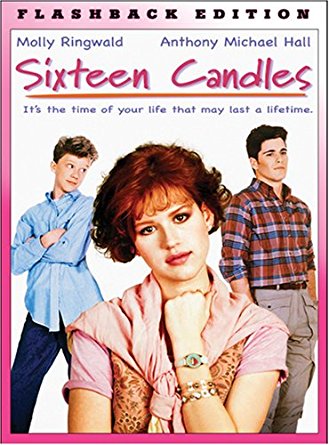 High school sophomore Samantha “Sam” Baker struggles to go through the day on her 16th birthday, which her entire family has forgotten about because her older sister, Ginny, is getting married the next day. She is also plagued by infatuation with a popular and attractive senior, Jake Ryan. At school, she fares no better when she finds out that a completed quiz, which she tried to surreptitiously slip to her friend Randy, never reached her friend Randy and, unbeknownst to either of them, was picked up by Jake. Despite her name not being on the quiz, Sam is still a bit panicked because the quiz contains sensitive information, such as how she is a virgin and is saving herself for Jake.

During gym class, Jake opens up to his friend Rock, admitting that he feels like things with his girlfriend Caroline have become stagnant. He also tells him how he thinks it’s cool that he keeps catching Sam looking at him from time to time.

Meanwhile, an outgoing geeky freshman named Ted is in love with Sam. On the school bus ride home, he tries to hit on her, only to have her spurn him with some trash-talk before she gets off.

At home, Sam has a whole new set of problems when she discovers that all four of her grandparents are staying at the Baker home during the wedding. One set of grandparents has brought along a bizarre foreign exchange student, Long Duk Dong. The grandparents force Sam to take him along to her school’s senior dance that night and, to Sam’s amazement, it takes “The Donger” only five minutes to find an unlikely girlfriend—the tall, large-breasted jock, Marlene.

As the freshmen hang out at the gym, Ted’s two best friends, Bryce and Cliff, watch as Ted crashes and burns after he once again hits on Sam and fails, with an upset Sam running off. Undeterred by this latest rejection, Ted accepts a bet from his friends that he can score with Sam. For proof, they need Ted to bring them her panties. While Jake and Caroline are slow dancing, he sees Ted’s interaction with Sam, so Jake asks him what he knows about her. Shocked that a senior is talking to him, Ted opens up a bit and boldly states that Ted hopes to take Sam home with him after the dance.

Looking for some solace, Sam finds her way to the school’s auto shop. Ted finds her and sees that she is still upset. She opens up to Ted, telling him how disappointed she was with her family forgetting her birthday. Sam also confesses her love for Jake. Upon hearing this, Ted tells her that Jake had been asking about her at the dance, and they agree that Sam should just go and talk to him. As she’s leaving, Ted reveals the wager he made with his friends, so Sam agrees to loan him her panties. 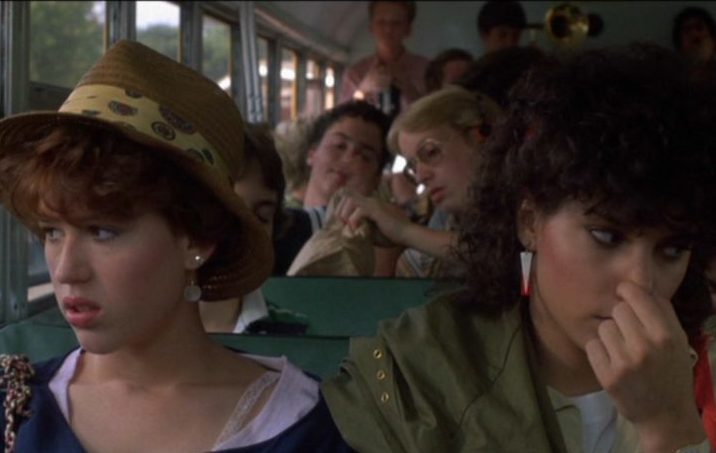 After Ted, Cliff, and Bryce have an impromptu peep show in the boys bathroom to show off the panties, they head over to Jake’s house for the dance’s after-party. Almost immediately, the trio find themselves in an awkward situation, knocking over a huge beer can pyramid. With Jake’s parents away for the weekend, his home becomes trashed by the dozens of students that crashed the party. Disgusted, he heads to his bedroom alone and tracks down Sam’s phone number after finding her picture in the school yearbook. He tries to call her, only to get tongue-tied when her grandparents answer instead.

At night’s end, Jake finds Ted trapped under a table and they begin to talk. Jake inquires further about Sam, and Ted explains the situation. Jake makes a deal with Ted: If Jake gets to return the panties to Sam, then Ted gets to drive a very drunk Caroline home in Jake’s father’s Rolls Royce.

The next morning, Jake goes to Sam’s house, only to have a hungover Donger say that Sam was at church getting married, which was totally wrong. Jake then finds Caroline and Ted making out in the back of his dad’s banged-up Rolls. With this turn of events, Jake and Caroline mutually agree that it’s time for them to break up and remain friends. Jake then drives to the church just in time to meet an incredulous Sam after her sister’s wedding.

The film concludes with Sam and Jake sharing a kiss over a birthday cake with 16 candles. Jake tells her to make a wish, but Sam says that her wish has already come true. 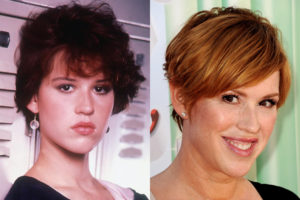 Molly Kathleen Ringwald was born February 18, 1968, and is an American actress, singer, and author. She was cast in her first major role as Molly in the NBC sitcom The Facts of Life (1979–80) after a casting director saw her playing an orphan in a stage production of the musical Annie. She and several other members of the original Facts of Life cast were let go when the show was reworked by the network. She subsequently made her motion picture debut in the independent film Tempest (1982), which earned her a Golden Globe nomination for New Star of the Year.  After appearing in the successful John Hughes films Sixteen Candles (1984), The Breakfast Club (1985), and Pretty in Pink (1986), Ringwald became a teen icon. She later starred in The Pick-up Artist (1987), Fresh Horses (1988) and For Keeps (1988). She starred in many films in the 1990’s, most notably Something to Live for: The Alison Gertz Story (1992) and The Stand (1994). Ringwald is part of the “Brat Pack” and she was ranked number 1 on VH1’s 100 Greatest Teen Stars.  Ringwald currently portrays Mary Andrews on The CW television series Riverdale.

Michael Earl Schoeffling was born December 10, 1960, and is an American former actor and male model, known for playing Jake Ryan in Sixteen Candles, Kuch in Vision Quest, and Joe in Mermaids.  Schoeffling was born in Wilkes-Barre, Pennsylvania, and raised in South Jersey. He graduated from Cherokee High School in New Jersey, and majored in Liberal Arts at Temple University in Philadelphia. In the mid-1980’s he began modeling for GQ, and photographer Bruce Weber paid for his acting classes at the Lee Strasberg Theatre Institute in Manhattan.  An accomplished youth and collegiate wrestler, Michael has won medals in various national and international tournaments. He appeared in eight additional films after Sixteen Candles, including roles in Vision Quest and Mermaids, and a starring role in the 1986 action film Let’s Get Harry and 1991’s Wild Hearts Can’t Be Broken.  Schoeffling retired from acting in 1991; in various magazine and newspaper interviews, he stated that the lack of roles and a growing family to feed were his reasons for retiring. Since giving up acting, he has produced handcrafted furniture as the owner of a woodworking shop.  Schoeffling lives with his wife Valerie C. Robinson, a former model, in Newfoundland, Pennsylvania. Robinson is an actress, known for Patty Hearst (1988), One Shoe Makes It Murder (1982) and Having Babies II (1977). They have two children, Scarlet and Zane. 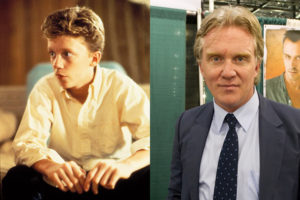 Michael Anthony Hall was born April 14, 1968, and is known professionally as Anthony Michael Hall, is an American actor, film producer, and director who starred in several teen-oriented films of the 1980’s. Hall began his career in commercials and on stage as a child, and made his screen debut in 1980. His films with director-screenwriter John Hughes, beginning with the popular 1983 comedy National Lampoon’s Vacation and the coming-of-age comedy Sixteen Candles, shaped his early career. Hall’s next movies with Hughes were the teen classics The Breakfast Club and Weird Science, both in 1985.  Hall diversified his roles to avoid becoming typecast as his geek persona, joining the cast of Saturday Night Live (1985–1986) and starring in films such as Out of Bounds (1986), Johnny Be Good (1988), Edward Scissorhands (1990) and Six Degrees of Separation (1993). After a series of minor roles in the 1990’s, he starred as Microsoft’s Bill Gates in the 1999 television film Pirates of Silicon Valley. He had the leading role in the USA Network series The Dead Zone from 2002 to 2007.

Sixteen Candles – Did You Know? 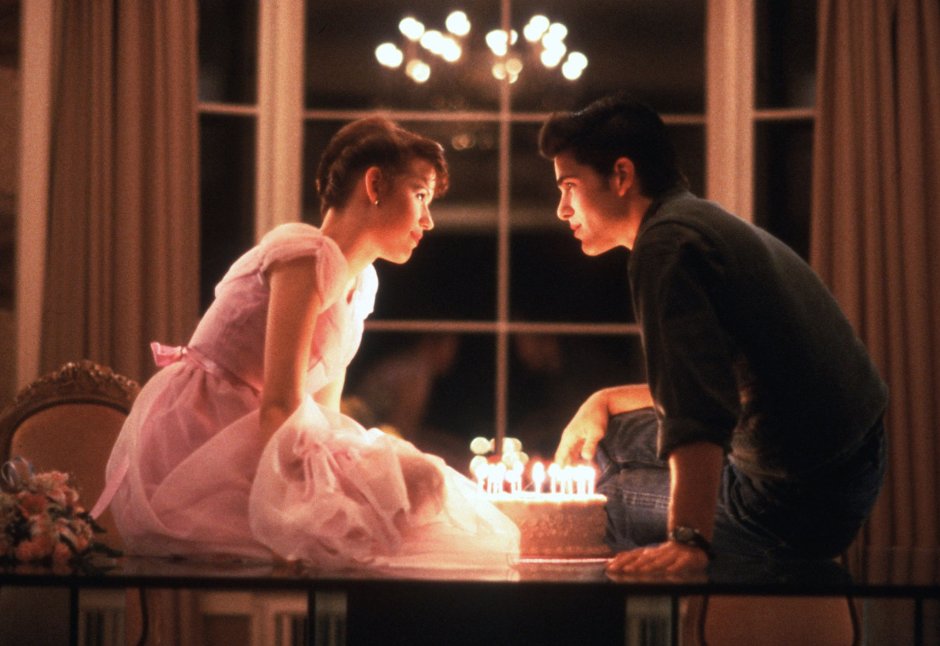 Thanks for stopping by today.  Please be sure to leave a comment, if this show meant something to you, too.  Or to just let me know what you think of the story in this post!   TigerStrypes claims NO credit for any images used on this post, unless otherwise noted.  Images in this post are copyright to their respectful owners. If there is an image appearing on this blog that belongs to you and do not wish for it appear on this site, please email us with a link to said image and it will be promptly removed.  Thanks and have a great day!!

I remember watching over and over again! I was a lot younger than the cast but I LOVED Molly Ringwalds style and the music.

Oh yes, that was skating rink music back in the day!! 🙂

This is one of my all time favorite movies and I’m a huge Molly Ringwald fan – I’ve actually seen her in concert, and “The Molly Ringwalds” too (which is a totally different thing but still way cool)!

Interesting, I never knew about a concert like that! 🙂

Greatest movie. I loved this one so much.

It’s definitely one that a lot of people watched.

Those are cool facts about the movie. Although it was released during my “time,” I haven’t seen it. It’s about time that I rectify that!

I don’t think I’ve see this, but it reminds me of the breakfast Club lol

Ha/Ha – probably because Molly was in like every movie back in the day! 🙂

Oh my goodness- this was one of my most favorite movies growing up. HUGE Molly Ringwald fan- I loved every one of her movies!

They were definitely all great ones!! Thanks for stopping by.

I’ll be honest – I’ve never seen this movie! I was born in 1984 and always wanted to watch it. It looks like a fantastic movie 🙂

That’s why it’s so nice to have the option of streaming!! 🙂

This was one of my favorite movies. I admired Molly and wanted to be like her.

I think everyone wanted to be a bit like her! 🙂