For this week’s “Things That Bring Back Memories” post, I am going to pick something in the topic of “MOVIES” and go with I Come in Peace.  This movie was released in 1990, and was one that I still call a favorite for some reason. I have no idea why, since now I really don’t care for action movies, but back in the day, this one was awesome!

The movie was one that I think I’ve watched numerous times and can always be ready to yell out the “…and you’ll go in pieces” line.  Best part of the movie!!  It was also nice to see a cop that did things his own way.  Now with all of the stuff going on with Arpaio here in Arizona, I guess you get in trouble for doing your job….but that’s another subject.

If, for some reason, you are of an age that makes it difficult to remember I Come in Peace, here’s a preview of the movie that we all saw before it came out (they were going to call it Dark Angel, and it had that name in the Int’l Market):

Did you ever watch the I Come in Peace movie when you were younger? or have you seen it on TV or Netflix later in life?  Let me know what you thought of it, and if you have any memories of it in your life!

Remember the I Come in Peace / Dark Angel movie from 1990? Classic #action & #scifi Find out more at Click To Tweet

More Info on I Come in Peace: 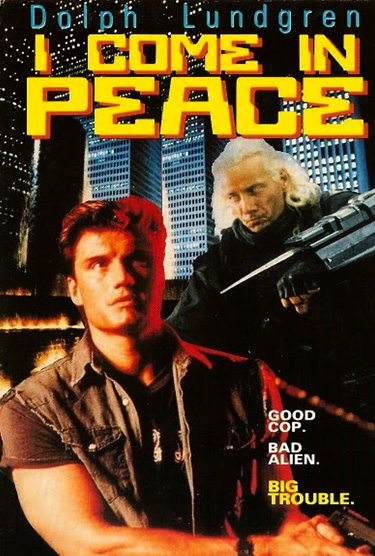 I Come in Peace (originally produced and released internationally as Dark Angel) is a 1990 American science fiction action film directed by Craig R. Baxley, and starring Dolph Lundgren, Brian Benben, Betsy Brantley and Matthias Hues. The film was released in the United States on September 28, 1990. The film is about a rule-breaking vice cop who becomes involved in the investigation of mysterious drug-related murders on the streets of Houston, Texas.

The original title is Dark Angel; the film was planned to be released under the same title in the United States (which had the latest release) but was renamed by Triumph Releasing to I Come in Peace because of two other movies entitled The Dark Angel (from 1925 and 1935), according to executive producer Mark Damon (in a 1993 interview with UK magazine Impact), who preferred the original title.

Houston cop Jack Caine will not let police procedure prevent him pursuing his mission to wipe out the White Boys, a gang of white collar drug dealers who killed his partner while Caine was stopping a convenience store robbery.

The White Boys disguise their narcotics trafficking behind rows of expensive luxury sports cars, executive level jobs, and flashy designer suits. Led by the vicious but urbane Victor Manning, the White Boys operate above accusation but not suspicion. Law enforcement knows they are dirty, but they cannot prove it. Caine is determined to bring them down. Caine’s superior is tired of his unusual and improper tactics. Meanwhile, Caine’s girlfriend, coroner Diane Pallone, wants him to make a stronger commitment to their relationship.

When the White Boys steal a shipment of heroin from a federal evidence warehouse, they hide evidence of their involvement by blowing up the facility, killing or injuring numerous people. This brings in the FBI, which becomes involved in Caine’s vendetta against the White Boys. Caine is partnered with a by-the-book partner, FBI agent Arwood “Larry” Smith. They investigate the drug theft and murder of several key White Boys soldiers. Smith wants Caine to follow official procedure, but Caine ignores him. He disregards Smith’s interference and begins to suspect that the Feds are investigating more than just the White Boys. 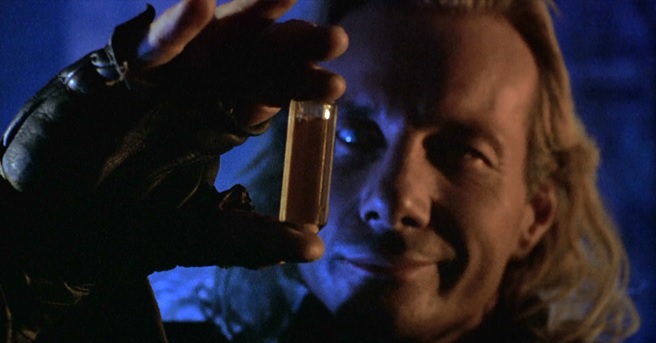 Caine’s instincts are proven right. The first clue is the murder weapon in the White Boys’ massacre: a hyper-fast, super-sharp vibrating disk like nothing they have ever seen. The second is a series of drug-related deaths has everyone very puzzled. The corpses are full of heroin, but the cause of death is not drug overdose. Caine and Smith do not follow the manual in their pursuit of answers. They end up on the trail of Talec, a vicious extraterrestrial drug dealer.

Talec shoots his victims full of drugs and then uses alien technology to extract endorphins from their brains, synthesizing them into a substance to be used by addicts on his home planet. He is pursued by an alien cop named Azeck, who warns Caine and Smith that if Talec is not stopped, thousands of intergalactic drug dealers will start to come to Earth to slaughter its population. Putting aside their differences, Smith and Caine team up to take Talec down.

Some of the I Come in Peace Actors: 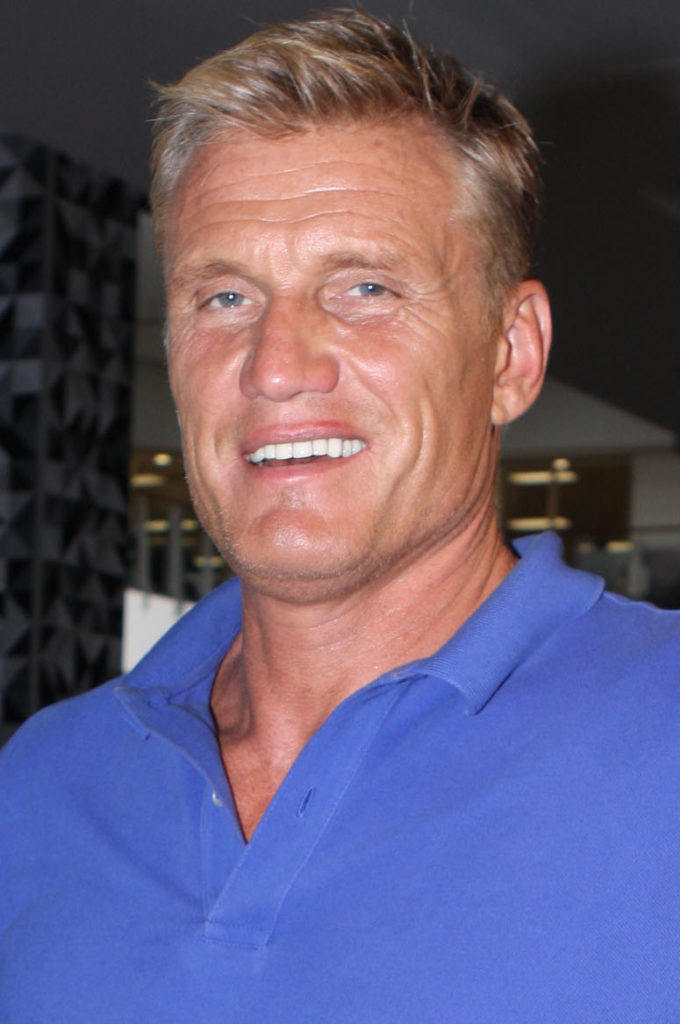 Dolph Lundgren (Detective Jack Caine) was born on November 3, 1957, and is a Swedish actor, director, screenwriter, producer, and martial artist.  Lundgren received a degree in chemical engineering from the Royal Institute of Technology in the early 1980’s and a master’s degree in chemical engineering from the University of Sydney in 1982. He holds the rank of 3rd dan black belt in Kyokushin karate and was European champion in 1980-81. While in Sydney, he became a bodyguard for Jamaican singer Grace Jones and began a relationship with her. He received a Fulbright scholarship to MIT and moved to Boston. Jones convinced him to leave the university and move to New York City to be with her and begin acting, where, after a short stint as a model and bouncer at the Manhattan nightclub The Limelight, Lundgren got a small debut role as a KGB henchman in the James Bond film A View to a Kill, in which Jones starred.  Lundgren’s breakthrough came when he starred in Rocky IV in 1985 as the imposing Soviet boxer Ivan Drago. After a long spell performing in direct-to-video films since 1995, Lundgren returned to Hollywood in 2010 with the role of Gunner Jensen in The Expendables, alongside Sylvester Stallone and an all-action star cast. He reprised his role in The Expendables 2 (2012) and The Expendables 3 (2014).  He is due to reprise his role as Gunner Jensen in The Expendables 4 (2018) and he will reprise his Rocky IV role of Ivan Drago in the upcoming sequel to Creed.

Matthias Hues (Talec) was born February 14, 1959, and is a German-born, naturalized American actor and martial artist. He was born in Waltrop, 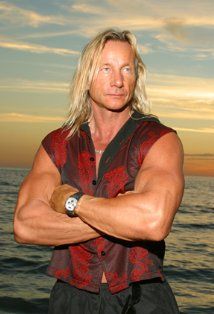 Germany, to Dr. Josef Hues and Maria Humperdinck Hues who still resides in Germany. Maria is the niece of Engelbert Humperdinck, composer of the opera Hansel and Gretel.  After graduating from school, Hues moved to Paris to enter hotel management. Once there he joined a health club in Paris, which had just been bombarded with the new Jane Fonda aerobic exercise program from the United States. Hues recognized an opportunity and after returning to Germany opened two health clubs, flying in aerobic teachers from the USA. During this time he became obsessed with the American way of life, and subsequently sold his clubs – boarding a plane to Los Angeles.  He immediately joined Gold’s Gym in Venice, California, the mecca of bodybuilding and entertainment personalities. Derek Barton, a former Hollywood stuntman and formerly one of Gold’s managing directors, received a call from a producer who had just lost Jean-Claude Van Damme for his movie and needed a replacement. Barton sent Hues to test for the role, and he managed to convince the producers to give him the part despite having no prior acting experience. The movie, No Retreat, No Surrender 2 (1987), was a moderate success, and opened the door for Hues to make more films.  His most commercially successful movie to date is Dark Angel (1990) and he has played a variety of roles in his films, from a gladiator turned private investigator in Age of Treason (1993) to an aging hit-man in Finding Interest (1994).  He also played a Klingon general in Star Trek VI: The Undiscovered Country (1991). Hues is one of the few foreign actors who has lost his accent to the extent that many people in his own country are unaware he is from Germany. 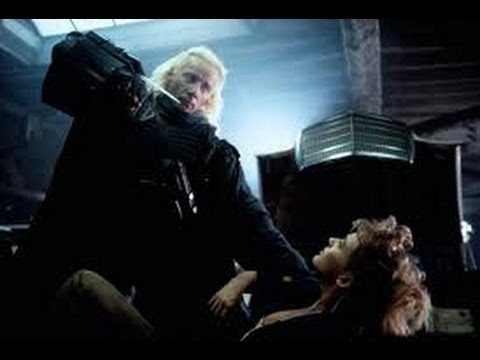 I Come in Peace Facts – Did You Know?

The project was initially titled “Lethal Contact” (as it was first written in 1984 as a spec script by Jonathan Tydor). The production, filming and international title is “Dark Angel”, and was released as such worldwide, before it was changed to “I Come in Peace” for the late U.S. release, because of two other existing movies entitled “The Dark Angel” (from 1925 and 1935).

Matthias Hues, who played the film’s alien bad guy, performed all of his own stunts because there were no doubles who could match his size (Hues is 6-foot-5).

The shopping center where Caine pursues a stolen Houston Police squad car commandeered by the villain is the former Park Shops Shopping Mall originally built in 1985 in the east end of Downtown Houston. The Park Shops was renamed Houston Center in late 2003 right after the Toyota Center and Hilton Americas Hotel was completed, along with the expansion of the George R. Brown Convention Center.

First science fiction film from 1990 about criminals being picked off by an extra terrestrial, which the main character, a policeman’s partner is also killed, with “Predator 2” (which was produced months later). 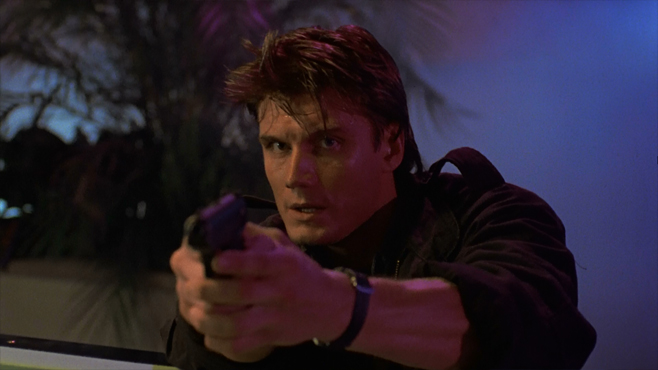 I completely missed that movie. (Though I do remember Dolph quite well.)

Isn’t that a shame to remember him? 🙂 ha/ha

I’ve never seen this one but my husband said it was great. Definitely need to watch it now.

It’s definitely one that only a few like, so it’s up to you if you like a Sci-Fi type of movie. 🙂

I haven’t seen this one. Sounds like a great movie!

It’s an interesting one, if you’re into this type of movie. Some people just don’t like the sci-fi.