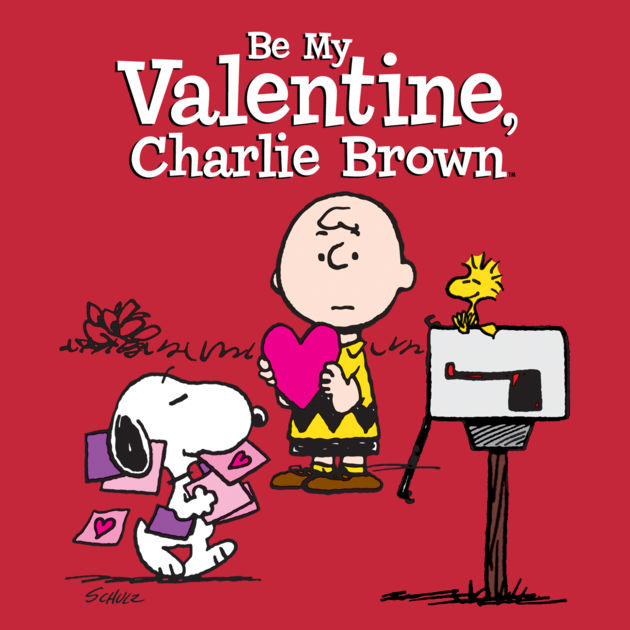 For this week’s “Things That Bring Back Memories” post, I am going to pick something in the topic of “TELEVISION” and go with “Be My Valentine, Charlie Brown.”  Since Valentine’s Day is on Wednesday, this show fits perfectly for today! This television show originally aired  January 28, 1975, and then on the ABC network on February 14, 2002.  It’s a lot newer than most of the Charlie Brown cartoons, but still one with mostly the same story and fun adventures.  Who doesn’t love seeing Snoopy kiss Lucy? ha/ha

This was always a great show to watch with family.  It made you smile and sometimes make you worry a bit about sharing those valentine cards with your friends and/or classmates, etc.  For those of you don’t remember it, or haven’t seen it, here’s a preview video:

So, did you ever watch this show with your kids, or family?  What was your favorite part? Let me know what you thought of it, and if you have any memories of it in your life!

The #MondayMemories for today is Be My #Valentine, Charlie Brown - do you remember that show? #TTBBM Find out more at Click To Tweet 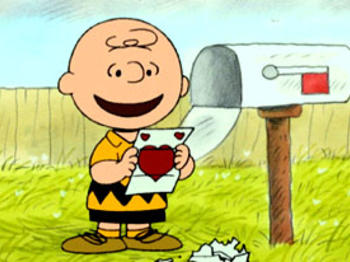 A Charlie Brown Valentine is an animated television special, based on characters from the Charles M. Schulz comic strip Peanuts. It features the Peanuts characters during the week leading up to Valentine’s Day.  Initially broadcast February 14, 2002 on ABC, A Charlie Brown Valentine was the first new Peanuts special to air on television since 1994’s You’re in the Super Bowl, Charlie Brown, and the first original special to be televised since Schulz’s death in February 2000.

A Charlie Brown Valentine was the first Peanuts special to be produced after the death of Peanuts creator Charles M. Schulz in 2000. It also marked the third time a Peanuts special was animated with digital ink and paint as opposed to traditional cell animation (the first one to do so was It Was My Best Birthday Ever, Charlie Brown in 1997.) It also utilized the drawing style similar to the comic strip, with a white outline around Lucy’s short hair and Snoopy’s long ears (this was then dropped in future specials).

A Charlie Brown Valentine also depicts the Little Red-Haired Girl in full view, though she remains unnamed in this special, in contrast to her first full-view appearance in It’s Your First Kiss, Charlie Brown (1977) when she was named Heather. She also does not resemble the “Heather” version in any way; that version last appeared in the 1988 special Snoopy: The Musical.

Later that day, Charlie Brown buys a cheap box of chocolates for the Little Red Haired Girl, and decides to hide behind a tree and give it to her, commenting “Love makes you do strange things”.  Throughout the cartoon Sally Brown tries to make Linus like her but to no avail. 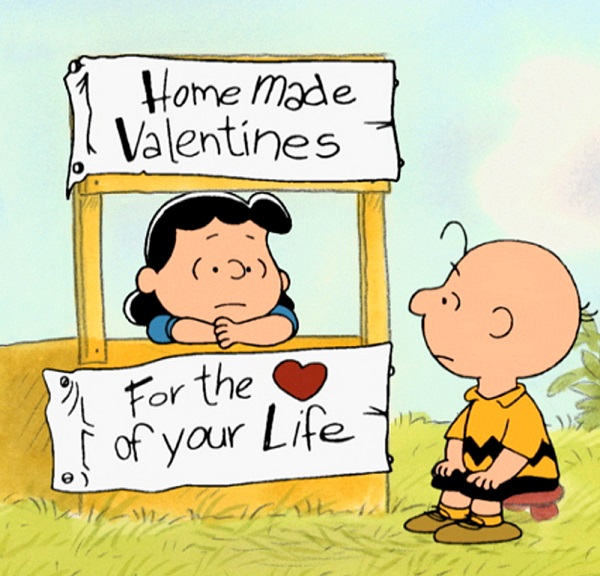 In class, Charlie Brown tries to impress the Little Red Haired Girl by winking at her. However, before she can notice him, the teacher sends Charlie Brown to the nurse because she thinks he is winking because his eye hurts him.  The next day, Valentine’s Day, Charlie Brown notices the Little Red Haired Girl handing out valentines. He gets excited that she might give him a valentine, but becomes discouraged when she doesn’t give him one.  When Charlie Brown and Linus are at the wall, Linus suggests that Charlie Brown calls her to invite her to the Valentine’s Day dance. Charlie Brown says he can’t because he is worried she might hang up in his face. Linus tells him that’s the beauty of calling on the phone. If she hangs up on one ear, that is not considered the whole face. 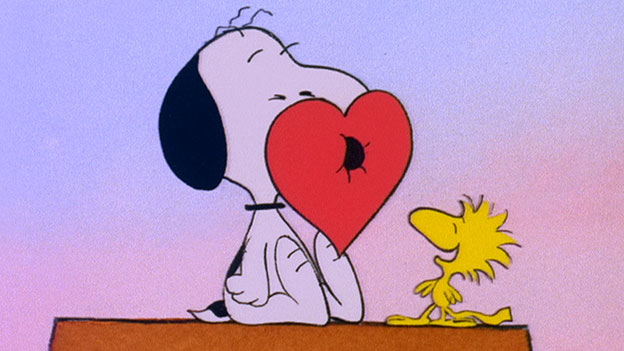 Charlie Brown with Linus dials on the phone, attempting to call the Girl. However, on the other side of the line, Marcie picks up. Charlie Brown realizes he dialed the wrong number. He tells that to Marcie, and Marcie says she understands, and she thinks he probably meant to call Peppermint Patty. She tells him lucky for him, that Patty is here. She gives the phone to Patty. Peppermint Patty asks Charlie Brown if he called to invite her to his school’s Valentine’s dance, but before Charlie Brown can answer her, she accepts the offer.

That night, Charlie Brown puts on a suit, because he has to go to the ball with Peppermint Patty. He goes to feed Snoopy first, but Snoopy puts on a bowtie and goes with him. When they arrive at the party, Charlie Brown is told that Snoopy can’t come in because dogs aren’t allowed at this party. Charlie Brown tells a fib to the host that Snoopy is really a kid who comes dressed as a dog because he thinks it was a costume party, so Snoopy is allowed in.

After the dance, Peppermint Patty and Marcie complain to Charlie Brown that he is not a good date, as he is a horrible dancer. They also ask that he doesn’t invite them to any more dances.  The special ends with Charlie Brown upset that he didn’t get to dance with the Little Red Haired Girl, and didn’t even receive one valentine. Just then, Snoopy brings Charlie Brown a valentine, and Charlie Brown becomes excited. The special ends right after that, and it is never revealed who the actual valentine is from.  Who do you think it came from?

Some Interesting Facts – Did You Know?

After this episode originally aired, children all over America sent valentines to Charlie Brown out of sympathy.

As Schroeder passes out the valentines, one of the names he calls out is Joanne Lansing. Joanne Lansing is the ink and paint supervisor for this and many of the other Peanuts specials.

Valentine’s Day is the only other holiday besides Christmas that has more than one Peanuts special devoted to it.

Snoopy shows off puppets resembling members of the cast and crew in the credits.

I love me some Charlie Brown! Why didn’t I know there were Valentine themed episodes?

I thought it was just a newer one, but found out that it had been remade from years ago. Crazy!

Yes, I do remember this. Thanks for the walk down memory lane. I want to watch this with my kids now.

I’m sure you can get it on demand. They would probably love it! 🙂

I use to love Charlie Brown! I still watch them now with kids for the holidays!

I love this so much when I was a kid! Thanks for the memories <3

That’s why I love doing these posts – it helps us to remember the pre-internet era!! 🙂

OMG!! Love Charlie Brown and Snoopy- these are so cute!

I don’t think I’ve ever met anyone who doesn’t. 🙂

I love Charlie Brown! I wonder if they will be playing it on TV this year? Going to have to find it.

I think it aired on February 9th, but I’m sure you could get it on demand, if you have that available.

Thanks for all of the cool trivia about Charlie Brown. I remember those days of watching the “specials,” and they truly were back in the day.

You’re welcome, Lynda – I love to bring back some memories!

I loved watching Charlie Brown as a kid! I am so glad they still show it on tv so I can watch it with my littles! I never knew kids sent Charlie Brown cards! How sweet was that!

Isn’t that adorable? Shows that there are many out there that still have a heart. 🙂

My family loves all the Charlie Brown movies 🙂 I think it’s cute that kids sent Charlie brown valentines as sympathy, I had no idea!

I thought that was adorable, too!!