**Disclaimer: I received a copy of this book to review but I was not financially compensated in any way. The opinions expressed are my own and are based on my observations while reading this novel.*

I received the invitation to read and review the new book called “Never Ever Give Up” (NEGU) by Erik Rees & Jenna Glatzer. I had never heard of this story and just looking into and hearing the story behind it, made me want to be a part of it.  I could not imagine the strength it takes to help your child through medical treatments, and then the pain of losing them.

This story was one that made you smile and brought you to tears.  I can not imagine the feeling, as a parent, to have your child go through this and not be able to “make it better.”  On page 16, it says…”I felt guilty for being so far away instead of standing alongside her in the room to hold her hand.  Daddies are supposed to do that when things are scary.”  I just cannot imagine the feeling of not being able to help. The way that the author lets you become a part of their family to feel this story, makes a big difference in how you interpret it.  You could end up feeling so sad that their sweet daughter had to deal with this disease, or look at it as a way of how one person can affect the lives of so many!

The NEGU campaign and JoyJars(R) started by this young lady has already touched many, and from what I can tell, will continue to touch many more in years to come.  I have been a part of the Operation Christmas Child for many years and seeing the pictures of the children receiving their box in the other countries, always brings a smile to my face.  Also, years ago, when our son, DJ was in the hospital, he received a bear and a quilt that some sweet ladies had made for kids that were admitted.  Over 10 years later, he still has both of those and we can always remember the smile on his face when he received them.   Having something like a JoyJar(R) to let a young child enjoy as they are going through chemo or dealing with some other medical thing would, I’m sure, bring many parents to tears watching their child smile for once and be able to enjoy being a kid.

I’ve added some more info below about the book and Jessie’s campaign for the children…check it out and leave a comment of how you feel about this great girl that would NEGU!!

Did you know that every each year in the US, the month of September is dedicated to “childhood cancer awareness”.   If you have a social media platform, please join our “Going Gold Campaign“ and help raise awareness of this devastating disease. 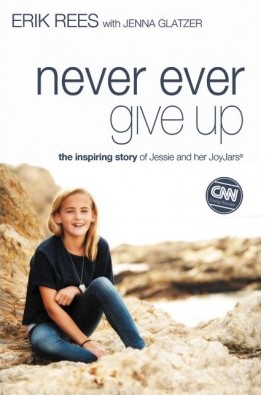 It started with a simple question: How can we help them? It became an international movement called NEGU: Never Ever Give Up. When Jessica Joy Rees was diagnosed with an inoperable brain tumor at age 11, she chose to focus not on herself but on bringing joy and hope to other children suffering from cancer.

During the ten months she battled cancer, she and her family worked in the “Joy Factory” (originally their garage) making JoyJars®—packages filled with toys, games, and love for other kids with cancer. Jessie first handed them out personally at the hospital where she was being treated, but the effort blossomed quickly and there were soon thousands of JoyJars® being distributed across the United States and to over fifteen countries. Today, more than 100,000 kids have received JoyJars®, and they continue shipping each week to kids in over 200 children’s hospitals and 175 Ronald McDonald Houses.

Jessie lost her battle with cancer in January 2012, but her message lives on in the Jessie Rees Foundation, which has become a beacon of hope for families fighting pediatric cancer.

1 out of 300 kids will have cancer before age 20. More than 175,000 are diagnosed worldwide each year. More than 100,000 JoyJars®* have been stuffed and sent to kids in all 50 states and in 27 countries. *What is a JoyJar®? It’s a large jar filled with activities, toys, and other items created to bring a smile to the face of a child with cancer.  Join the movement at www.negu.org.

About the Jessie Rees Foundation

The Jessie Rees Foundation was, and always will be, inspired by one courageous and compassionate 12 year old little girl. Her name, Jessica Joy Rees, better known as “Jessie.” Jessie was a faith-filled, beautiful, athletic, caring and loving twelve year old girl who courageously fought two brain tumors (DIPG) from March 3, 2011 to January 5, 2012. She loved her family very much and her puppy Mr. Moe.

During her courageous 10 month fight with two brain tumors, 12 year old Jessie Rees asked her parents to help encourage every kid fighting cancer to never ever give up. Jessie’s Wish is the sole mission of her foundation.

Erik Rees is the chairman of the Jessie Rees Foundation, better known as “Jessie’s daddy” to the 500,000 social media fans he talks to weekly. Through Erik’s leadership, Jessie’s mission to encourage every kid fighting cancer to “Never Ever Give Up” is becoming a reality. He and his wife, Stacey, live in Orange County, California, with their children, Shaya and JT, and their four dogs.

Jenna Glatzer (www.jennaglatzer.com) is the author or ghostwriter of 20 books. Her recent work includes The Marilyn Monroe Treasures (Barnes & Noble/Metro Books), a bestseller for Barnes & Noble and released in five languages; My Stolen Son with Susan Markowitz (Berkley/Penguin), which is the true story behind the major motion picture Alpha Dog; Bullyproof Your Child for Life with Joel Haber, Ph.D. (Avery/Penguin); and the authorized biography Celine Dion: For Keeps (Andrews McMeel). She lives in New York with her daughter.

Zondervan, part of HarperCollins Christian Publishing, is a world leading Bible publisher and provider of Christian communications. For more than 80 years, Zondervan has delivered transformational Christian experiences through its bestselling Bibles, books, curriculum, academic resources and digital products. The company’s products are sold in multiple formats, worldwide in more than 60 countries, translated into nearly 200 languages. Zondervan offices are located in Grand Rapids, MI. Find out more at www.zondervan.com.

About the Marketing Company

C. Grant & Company is a group of spirited, strong individuals who have come together to help people leading remarkable organizations shape a different, better future. We craft research, strategy, and marketing programs to understand, attract, and retain the right employees, customers, and partners. We bring lots of “and’s” to the table. They allow us to solve problems, not recycle solutions.

I, Jamie Tomkins, own and operate, TigerStrypes Blog, located at www.tigerstrypes.com. From time to time you’ll hear about my real life experiences with products and/or services from companies and individuals. Let it be known that I have no affiliation with these said companies, and have not received compensation for reviewing their service/product. The service/product was purchased by myself with either monetary means, points, or coupons. No portion of the product/service was given to me by the company or any agents of the company. The review that I give regarding the product/service is based off my own personal experience, I do not guarantee that your experience will be the same.

Adding to my reading list. I love reading these kinds of inspirational stories. Sometimes they are sad and emotional, but worth the read. Thanks for introducing me!

I can see why you said this book would move you to tears. Just reading your honest review and learning about the JoyBars story has me teary. Thanks for sharing this great book. I’m going to add it ti my read list.

I love stories like this! It’s amazing the kind of courage children have & yet they want to put their effort into making someone else’s day. I see this book & a box of tissues in my future.