*Disclaimer: I received a copy of this DVD to review but I was not financially compensated in any way. The opinions expressed are my own and are based on my observations while watching this movie.*

I received an email from Elliott with Edify Media, Inc. about the new movie being released called “Hero“. I told him I would love to be a part of the team that was able to review the movie and then let others know about it, before it is released.

The story is about a Dad who leaves his family due to business needs and has to come back when he hears that his wife is not going to make it due to cancer. That part to me, was a bit confusing. He was leaving for his career, which is fine for a week, but he’s gone for 7 years…that to me was just weird. He comes back to spend time with his wife and then has to bury her. His son is not happy that he’s back and tells him that he has everything handled and doesn’t need to stay. Burgess Jenkins, who plays the Dad, tries to make a difference in his son’s life, as well as the kids of the community, who his son has been coaching in little league.

It turns out to be a great story, and shows how important the family is. I watched this with my husband, and our son, and after, asked my husband how he felt about it. He said that it really showed that how in today’s world, the Dads are just too focused on work and personal issues, and not their families.  He said that family is so much more important, and we need to get back to son’s being raised by their father’s, and having a more fruitful life.  All in all, the story was amazing and the difference the guys made in a few boy’s life, could be spread out a hundredfold in the society today, if more Dads would take the correct actions needed in their kid’s lives.

I’ve added more info on the film below – check it out and then comment on what you think and enter to win a copy of the film!

HERO – DADS ARE A SUPERPOWER 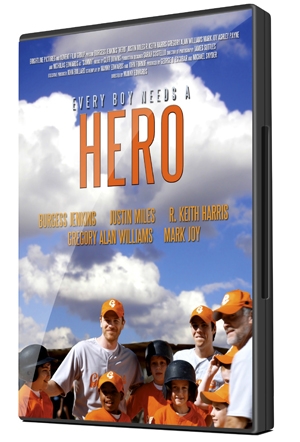 Los Angeles, California- From producers of Alone Yet Not Alone, comes a heartfelt movie about legendary small town baseball coach, Joe Finn (Burgess Jenkins, Remember the Titans, Nashville, The Shunning), who after taking his shot as a scout for the big leagues returns home to discover the damage he’s done by leaving his family behind. Now on a quest to rebuild his relationship with his son David, Joe forms a new baseball league to reinvigorate the underdog little league team his son had been coaching. Together, as father and son, they try to put away their differences and help bring their ragtag team of ball players, “The Gappers”, to victory.

Burgess, who has a child of his own, was excited about the film. “This movie really reinforces the importance of fathers in a child’s life. Sports can be that vehicle to solidify the bond.” George Escobar, a producer of Hero, wanted to make a movie that highlighted the real value in playing a sport and trying to win. “I grew up playing sports, and this idea of playing without winners and losers just seems like a missed opportunity to teach the kids how to train themselves to win. As iron sharpens iron, so one person sharpens another. A rival will push you harder than the desire to do your best.” 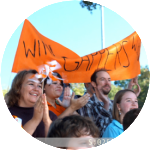 In a movie sure to inspire fathers and sons alike, Hero presents an all-star cast including Gregory Alan Williams (In the Line of Fire, The Preacher’s Kid), R. Keith Harris (Big Fish), and Mark Joy (The Ultimate Gift). The film also includes a musical score by Grammy winner, Michael Omartian. For more information or to see the trailer go to www.herofamilymovie.com.

Synopsis: A father’s broken relationship with his family fills him with determination to win back the son he left behind. Reaching out through the game they both love, he deliberately forms a baseball team designed to reconnect both fathers and sons, transforming their town in the process. The story shows how one good man can lead change in his community for the common good.

“A TERRIFIC MUST SEE MOVIE! WATCH IT AND BE INSPIRED!”
-DOVE FOUNDATION

Enter To Win A Copy Here:

DISCLAIMER: I, Jamie Tomkins, own and operate Tiger Strypes Blog located at www.tigerstrypes.com. From time to time you’ll hear about my real life experiences with products and/or services from companies and individuals. Let it be known that I have no affiliation with these said companies, and have not received compensation for reviewing their service/product. The service/product was given to me by the company or any agents of the company. The review that I give regarding the product/service is based off my own personal experience, I do not guarantee that your experience will be the same.

Sounds like a great movie! I will have to check it out.

Looks like a great movie! I’ll have to check it out myself!

This sounds like a good movie to inspire fathers to be more involved in their kids life. My husband use to work nights so he was not in the older 2 kids lives but now he is on days and is involved in the younger 3 kids lifes.

This sounds like a great movie. But I would definitely have to watch it in order to wrap my head around the 7 years part.

Awwww! Such a great story!