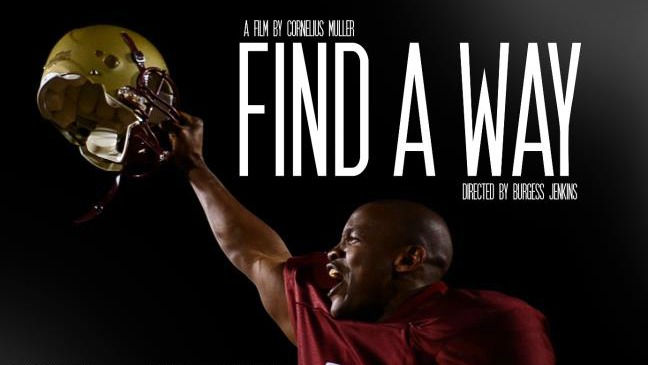 Even Through Tragedy, You Can “Find A Way!”

I received the Find A Way movie from Elliott at Edify Media and really didn’t know what it was going to be about.  I see so many different movies that are based on Football, and me being one to not really care for sports that don’t have a gas tank and ignition, didn’t really know if I would like it or not.

I was glad that the movie, was not focused on the sport, but the people.  The story that goes with it, is one to make you look at your own life and try to be sure that you are living it to the fullest.  Losing those that truly make a difference at such a young age, makes you realize that there is no set time on our life.  We must do all that we can, to leave a positive mark on this world and help others to live a good life of their own.

I loved watching this with our son, it helped to show him, that even the little things that you might not think are important, can make a huge difference in someone’s life.  Just sticking up for someone who is being bullied, or helping someone who just needs a friend to talk to can make a really big mark on someone’s heart.  Plus the kid in real life, who this movie is featuring, being able to donate organs to another to help them live on, was a huge reminder of the change we can make, even when we’re no longer able to see it!

This movie is one that I would recommend to families of older kids, high school students, college students and families in general.  The production is great, the story is amazing and it’s one that can get you to talk about things that just are sometimes not covered with family, etc.  Thanks Elliott for another great movie!

This is how a tragedy began for a Burlington, North Carolina family. Their son Harry Cohen was a high school senior, a genuinely inspirational young man, star football player, friend to all and strong Christian. One morning he didn’t wake up.

The untimely death of an outstanding young person naturally brings up the questions about faith and God’s presence. How can God allow such a thing to happen? The event obviously has an immense effect on family, friends and the community at large. Why do bad things happen to good people?

“Find a Way” is a terrific inspirational film about finding a way through when life’s challenges and obstacles block the path. The story, based on actual events, opens with star football player Billy “Smiley” Cain, Jr. winning the big game for his team. Smiley is a compassionate and well-liked senior at his high school. He does good deeds such as boosting a girl’s self esteem when a boy treats her badly and defending a boy he doesn’t know against a bully. He gives the girl, Casey, a cross and tells her it always reminds him that “there is a way.” When Smiley is hospitalized unexpectedly with a life-threatening illness, his influence is felt more than ever.

This movie ties together a number of story lines, including a girl’s parents possibly divorcing, a boy’s father insisting he play football despite his interest in music, and a counselor named Mr. Jordan who is always there for the students. Smiley’s adoptive parents, the Medleys, wait in a bedside vigil, hoping their son will recover. When it looks like he won’t, they learn of a way that he can help others even in death.

This wonderful movie pulls the viewer in and features strong performances including Cranston Johnson as Smiley, Vonii Bristow as Nick Whitefield, Cornelius Muller as Coach Alan Whitefield, and Charis Jeffers as Casey Archer. “Find a Way” features this great line by a pastor: “God called us not to be people of understanding, but people of faith.” For anyone who has made it through a difficult time but didn’t fully understand why the trial took place, this film is for you! Five Doves, our best rating, is presented to this movie and it is awarded our “Faith-Friendly” Seal for ages 12+.

While attending to his business interests over the years, Cornelius’ true passion emerged when, approximately 15 years ago, he began pursuing his dream in the arts. Since then he has appeared in numerous commercials and independent films while continuing his studies in method acting at Carolina Actors Group in Winston-Salem. Cornelius had been seriously questioning where he fit in in the entertainment industry when a personal family tragedy occurred. His answer came in the form of a film project titled “BROTHER’S KEEPER” which came about after he received what can only be called signs from above leading him in the direction of this movie. His mission became to create a Christian film, based on his real life events, that makes people think and inspires them, and answers what he feels is his calling to produce such meaningful film projects.

Esteemed actor Burgess Jenkins, in his directorial debut, signed on to head up Find a Way. Burgess studied for 4 years at the famed Playhouse West in Los Angeles under Bob Carnegie and Oscar nominee Jeff Goldblum, and has worked tirelessly since in both film and television. He had the coveted role of Ray Budds in the Blockbuster “Remember The Titans” opposite two time Academy award winner Denzel Washington. He has starred opposite academy award winner Hilary Swank in “The Reaping”; played Bobby Irons throughout season 6 on the hit WB series “One Tree Hill”; starred opposite Hugo Weaving in “The Key Man” and recurred on LIFETIME’S smash hits “Army Wives” and “Drop Dead Diva”. Burgess is currently co-starring in the long running series Army Wives as well as the hit ABC series “Nashville”. In addition, Burgess Jenkins runs the Carolina Actors Group which is a training ground for film and television actors. All of which gives him unique vision and insights into the means to make this a successful film.

***********************************************
Disclaimer: I, Jamie Tomkins, own and operate TigerStrypes Blog located at www.tigerstrypes.com. From time to time you’ll hear about my real life experiences with products and/or services from companies and individuals. Let it be known that I have no affiliation with these said companies, and have not received compensation for reviewing their service/product. The service/product was given to me by the company or any agents of the company. The review that I give regarding the product/service is based off my own personal experience; I do not guarantee that your experience will be the same.
9 Comments
Newest
Oldest Most Voted
Inline Feedbacks
View all comments

Chelsea @ The Johnsons Plus Dog

Looks like a good one! Can’t wait to see it 🙂 #HomeMattersParty

Author
Jamie
Reply to  Chelsea @ The Johnsons Plus Dog

Definitely one that I want to get tickets for!! Thanks for stopping by Chelsea!

This sounds like an awesome movie. Thanks for being such a great cohost on #HomeMattersParty.

Looks like a great movie. Thanks for the great review, and for being such a great co-host at #HomeMattersParty this month.

It definitely was a great one, Shann – thanks for stopping by! 🙂

This does sound like a great movie and I love watching those that follows several chacters in it.

I love movies that leave you wanting to be a better person and pay it forward!

For sure – those are the ones that can make a difference in someone’s life!