Skip to content
*I received a copy of this book to review but I was not financially compensated in any way. The opinions expressed are my own and are based on my observations while reading this novel.*

I received the “90 Minutes in Heaven” book from Laura Beth with FlyByPromotions. I had heard about the movie coming out, that goes with the book in previews online, social media, etc. Living in the mountains, we probably won’t be able to see it until it comes out on DVD, since our local theater doesn’t play all of these great films.

For now, I’ll just continue to read the book and be in awe of this amazing story!! You kind of have to keep looking at the cover and reading “a True Story of Death and Life” to remind yourself that it’s not fiction. How someone, their friend, and family can make it through something like this, truly shows the power of God working in people’s lives. Our Lord is amazing!!

Even though you have a certain plan for your future, God might change that up a bit. You just need to learn how to sit back and allow him to be the leader in your life and know that He will always show you the right Way! 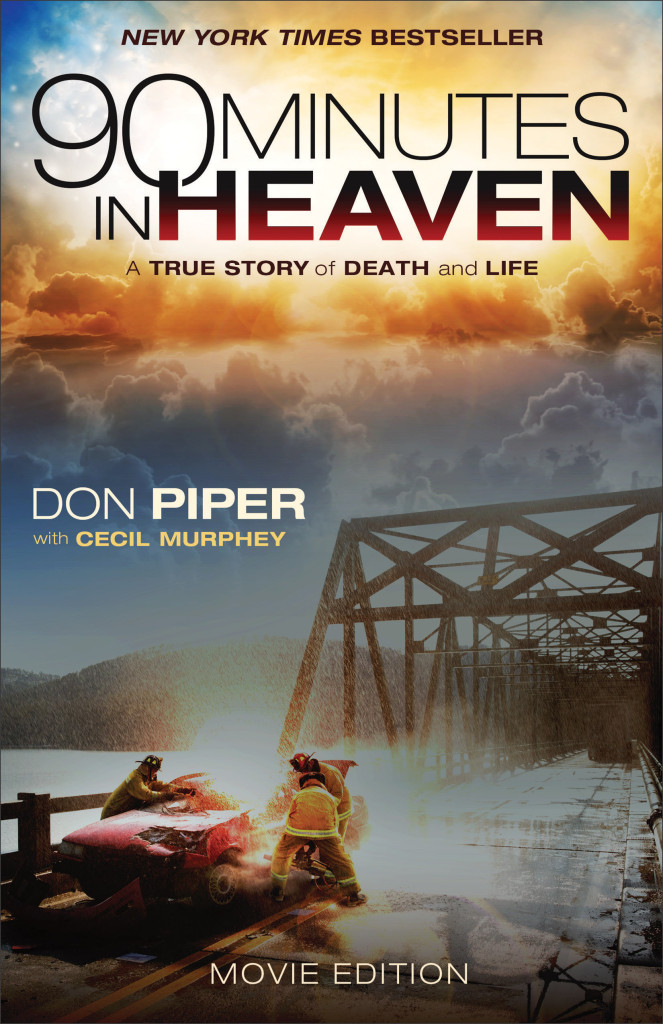 The mega bestselling book that started the heaven publishing phenomenon is now a major motion picture starring Hayden Christensen and Kate Bosworth and produced by Michael Polish. Don Piper’s incredible true story continues to expand its reach to more people than ever before.

After a semi-truck collided with Don Piper’s car, he was pronounced dead at the scene. For the next ninety minutes, he experienced the glories of heaven. Back on earth, a passing minister felt led to stop and pray for the accident victim even though he was told Piper was dead. Miraculously, Piper came back to life, and the pleasure of heaven was replaced by a long and painful recovery.

This special edition of Don’s life-changing story includes a new preface from Don about the making of the movie, plus a personal update on the impact the book has had on him, his family, and the millions who have already heard his story. It also includes a note from the publisher, stories from readers, and Scriptures and quotations on heaven.

Don Piper has mesmerized and inspired nearly three thousand audiences around the globe since the release of his New York Times best selling book in 2004. Millions have experienced the 90 Minutes in Heaven story in person, on television, radio, and print media. Don Piper has sold over 5 millions copies of his books in 40 languages. His first book, 90 Minutes in Heaven: A True Story of Death and Life, remained on the New York Times best-seller list for nearly four years! This book, from Baker Publishing Group’s Fleming Revell, is widely considered to be a landmark book that has led to a renaissance in the interest of Heaven.

Following his radio and television broadcasting career, Don Piper pursued a calling that he had had on his life since adolescence and became an ordained Christian minister. During his service as a pastor, in fact on his way to church, Don Piper was killed in a horrific car crash in 1989. A pastor who was on that lonely highway behind him, felt called by God to pray over Don’s dead body and did so for ninety minutes. Others who were told of the accident, but not of Don’s death, also prayed. After an hour and a half, as the pastor prayed over Don’s lifeless body, Don began to sing a song!

Don Piper returned from the gates of Heaven to endure 13 excruciating months of hospitalization, 34 major surgeries, including some never before attempted in the United States, and years of painful therapy and rehabilitation. He now shares his incredible lessons of answered prayer, miracles, overcoming tragedy, pain and loss, and the reality of Heaven. Indeed, each time Don rises to speak, people are astounded that he can even walk onto the platform. But he does and those in attendance are simply not the same after he concludes his presentation.

Around the world Don Piper has shared the story of hope and healing. He’s appeared on NBC’s Today Show, Dateline NBC, ABC’s Nightline, FOX Network’s Sean Hannity’s America, and The O’Reilly Factor. A frequent guest on Trinity Broadcasting’s Praise the Lord and Christian Broadcasting Network’s 700 Club, Don has also appeared on D. James Kennedy’s Coral Ridge Hour, and Life Today with James Robison, among many others programs. He’s also been interviewed by literally hundreds of radio stations, newspapers, and magazines all over the world.

There’s now even a movie coming out (to be released September 2015), based on the book. Check out the preview here:

Don Piper – Has inspired audiences in more than 3,000 churches and venues around the globe since the release of his book, 90 Minutes in Heaven, co-written with Cecil Murphy. Having sold more than 7 million copies in 46 languages, the book remained on the New York Times bestseller list for nearly four years after its release. In addition, countless people have heard his story in person, on television and on the radio. He’s been interviewed by literally hundreds of television shows, radio stations, newspapers and magazines all over the world.

Don has released three additional books: Daily Devotionals: 90 Readings for Hope and Healing; Heaven Is Real: Lessons on Earthly Joy; and Getting to Heaven: Departing Instructions For Your Life Now, all from Penguin-Putnam (now Penguin-Random House). Known around the world as “The Minister of Hope,” he founded Don Piper Ministries in 2007 to channel revenues from book sales and speaking income to financially support more than 40 ministries and charity organizations.

Eva Piper – She is a speaker and author of A Walk Through The Dark. She has a unique insight into the trials of heartache and the triumph of overcoming. She has inspired audiences with her testimony of walking her hurting loved ones through a dark night and surviving to see a sunrise not just bright, but much more beautiful because of the journey. The wife of bestselling author Don Piper, Eva was the glue that held her broken husband and her family together. Don calls her the “real hero” of their ordeal. A teacher for 34 years, Eva and Don live in Pasadena, Texas. They are the parents of three adult children and have two grandchildren.

Cecil Murphey – Veteran author Cecil (Cec) Murphey has written or co-written more than 135 books, including the New York Times bestseller 90 Minutes in Heaven (with Don Piper) and Gifted Hands: The Ben Carson Story (with Dr. Ben Carson). His books have sold in the millions and have brought hope and encouragement to countless people around the world. Cec stays busy as a professional writer and travels extensively to speak on topics such as writing, spiritual growth, caregiving, significant living, sexual abuse, and recovery. Prior to launching his career as a full-time writer and speaker, Cec served as pastor in Metro Atlanta, as a volunteer hospital chaplain for ten years, and was a missionary in Kenya for six.

Enter To Win A Copy of the Book:

Giving Films is passionate about sharing hope-filled movies and donating ALL of their profits to charities and ministries who serve those in need. Beginning with their first film, 90 Minutes In Heaven, Giving Films is allowing all of us to be a part of making a difference. Anytime you go to a Giving Films movie in theaters, visit http://www.givingfilms.com and select which charities you want to receive the profits from your ticket. Their charitable organizations are Christian Alliance for Orphans, Faith Bridge Foster Care, Hire Heroes USA, Hope International, LifeWater, Street Grace, and World Vision.

I learned that you can touch the edges of heaven without fully leaving this world. What a wondrous experience!

I read the book and now I’m pumped to see the movie. Just curious how they’ll approach it….

The movies are never as good as the book, but I’m sure it will be great!

I’m reading this book now and it’s amazing. I cannot wait to see the movie.

I need to see the movie first. Then I will read the book

I’m one that likes to read the book and then see the differences in the movie. 🙂

My son read this book in school. I would love for us both to see the film, very inspirational.

How interesting that he read it in school!! I can’t wait for the movie…I’m sure my son’s youth group will all go!

Such a beautiful book and I can’t wait to see the movie! Sharing!!