*I received a copy of this book to review but I was not financially compensated in any way. The opinions expressed are my own and are based on my observations while reading this novel.*

I received a copy of this book from Elliott at Edify Media, Inc.  I had just recently read a book called “The Turning” by Davis Bunn and this is actually the same author, under a different name.  He has an interesting way of writing and makes you feel like you can see what you are reading.  This book is about a young boy who is going through a pretty hard life and having to deal with all different things.  Being that it is mainly focused on extraordinary and enchanting things, it’s really not my style of reading.  If you like this type of content, then I’m sure you would really enjoy this book.

I’m just not a fantasy reader, and like stories that teach me things that I can use in my life, and not really just take me away from reality.  Now, the way it is written and the storyline is done very well and it’s not too over the top, however, in my opinion – it’s just not for me.  Read the description below and let me know what you would think of it – and enter to win one for you to read for yourself. 🙂 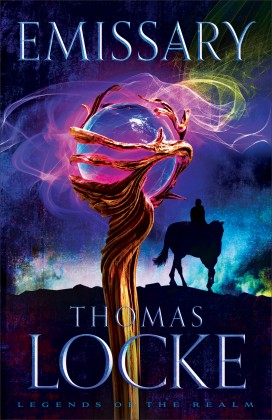 Hyam is a likeable lad who will make a fine farmer someday. But he carries a burden few can fathom. As his mother slips toward death, she implores him to return to Long Hall, where he spent five years as an apprentice. It was there that Hyam’s extraordinary capacity for mastering languages came to light–and soon cast him into the shadows of suspicion.

How could any human learn the forbidden tongues with such ease? When Hyam dares to seek out the Mistress of the Sorceries, her revelation tears his world asunder.

He has no choice but to set out on the foreboding path–which beckons him to either his destiny or his doom. An encounter with an enchanting stranger reminds him that he is part hero and part captive. As Hyam struggles to interpret the omens and symbols, he is swept up by a great current of possibilities–and dangers.

With lyrical prose that unveils a richly imaginative world, Thomas Locke takes readers on a journey into the Realm. There he invites them to awaken their sense of wonder. This cracking adventure moves like a contemporary thriller but harkens back to the enduring genre of classic fantasy.

Editor Review (Los Angeles, CA) – New York Times bestselling author Davis Bunn, author of multiple award-winning books, is set to release a completely new brand of novels under the pseudonym Thomas Locke. These novels will still provide the same “suspense and intrigue” (Publisher’s Weekly, The Turning), that his readers have come to expect, but with storylines targeted to the general market. His first book under the name Thomas Locke, Emissary, is a fantasy, something new for Davis though he is an avid fan of the genre. “Growing up I loved fantasy novels and the magic behind them, where absolute good would struggle against absolute evil. I’ve been excited about the chance to use that inspiration to tell my own stories.”

em·is·sary (noun) \ˈe-mə-ˌser-ē, -ˌse-rē\
: a person who is sent on a mission to represent another person or organization

This new initiative is seen as a departure from Davis’ past efforts in the Christian marketplace. “This is something different for me. These Thomas Locke novels are completely secular, really very mainstream,” said Bunn, “I felt it was important to differentiate them from my other work which is why I’m releasing them under the pseudonym Thomas Locke.”

Revell has committed to publishing two series of Thomas Locke novels, the first is set to release this January. “Our team was thrilled with Emissary,” says Dwight Baker, president of Baker Publishing Group. “Readers will love this series and we’re proud to introduce the Thomas Locke novels.”

Emissary is set in a world where magic has been outlawed for centuries, the only places its secrets are still practiced are the Long Halls scattered throughout the land—isolated haunts of wizards called mages and their long-suffering students. But hidden rivers of power course deep beneath the earth, and not everyone has obeyed the edict outlawing magic. Vixens lie in wait on the Galwyn road. A mysterious race of telepaths comes and goes invisibly. It is even rumoured that Elves still hide among the wizened trees. And somewhere beyond the badlands, a menacing force is growing ever more powerful and threatening the hard-won peace of the realm. One young man has the power to stem the tide . . . but to do so will mean walking away from everyone and everything he has ever known.

T. DAVIS BUNN, a native of North Carolina, has lived in Europe for thirty-five years. Davis’ academic background includes degrees in psychology and economics from Wake Forest University and a master’s degree in finance from the City University of London. Fluent in three languages, he has traveled extensively in Europe, Africa, Asia and the Middle East. Davis is a New York Times bestselling author and has garnered a number of industry honors, including three Christy Awards for excellence in historical and suspense fiction. Davis teaches in the Creative Writing Program at the University of Oxford, where he holds an appointment as a Core Lecturer in the subject of fiction. He splits his time between Oxford and Florida with his wife Isabella.

Revell began over 125 years ago when D. L. Moody and his brother-in-law Fleming H. Revell saw the need for practical books that would help bring the Christian faith to everyday life. From there, Fleming H. Revell Publishing developed consistently solid lists which have enjoyed the presence of many notable Christian writers over the years. This same vision for books that are both inspirational and practical continues to motivate the Revell publishing group today. Whether publishing fiction, Christian living, self-help, marriage, family, or youth books, each Revell publication reflects relevance, integrity, and excellence.

Connect With The Author:

[…] Locke from Edify Media, Inc.  I had previously read another book  by Thomas Locke, called “Emissary” and thought he had a very different way of writing.  Reading this one, in my opinion, was a […]

This really sounds like a great book and one I’d enjoy reading. I love this type of genre.

Sounds like a good book to let your imagination have fun.