Thank you FishFlix for partnering with me on this movie review!

I got an email from a great source for Christian DVD’s called FishFlix about this new 94 Feet movie coming out, and they asked if I’d like to review it.  I said yes, since I had heard about it coming out previously, and really wanted to see it.  I watched it with my family, and it ended up being a GREAT movie.  There were times you were laughing, times of tears and many times of being thankful for your family!

The story was based on some local miners, that in my opinion are heroes.  God bless all of those that risk their lives in places underground, to look for things needed up top.  They are brave, strong and definitely willing to lose their lives to support their family.  Just seeing the workers put their dog tags up on the board before their shift, really made you think!

I would definitely recommend this to anyone who enjoys movies about action, family, friends and faith.  There are some great personal stories inside of the main story of the movie, and it’s perfect for anyone wanting to watch a movie that is good for almost any age.  It definitely gets you talking after and thinking of the pool game of Marco Polo a bit different!!  ..you’ll have to watch it to find out why! 🙂

I got to review the #94Feet DVD from @christianDVD and loved it! Check out my review at Click To Tweet 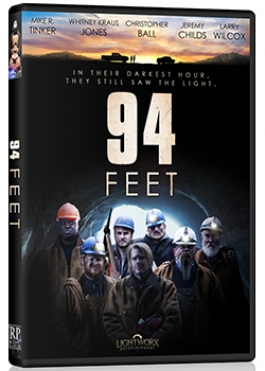 In a small mining town, it seems that everything is spinning out of control in 94 Feet, a new film from Rossetti Productions. Chris and Denise Rossi, a family that has been a central part of the small town for decades is considering leaving the town after their main industry, mining begins to dry up. As the town falls into disarray and the large majority of the workers in the mining industry are laid off, it seems that this could be the end of their town. While the mining company does their best to keep everyone from leaving the town, it could be the end.

The only thing that could save this town is a disaster, which comes in the form of an unexpected explosion at the mine. The town is shocked by the event, as ripples echo through the town. The townspeople are familiar with the mining industry and they understand what this means – everyone in the mine is likely either trapped or dead. Through the comfort supplied by only God, Denise and the other townsfolk must work through the event and do their very best to save Chris and the other workers before they become buried alive.

In the end, this is a film about the providence of God and finding peace and comfort through him. When the world is thrown into chaos and it seems that Chris and his co-workers will never make it out of the cave-in, his wife Denise is given an inexplicable peace that could only truly come from God. This film is a positive reminder that God will always be a powerful source of comfort for us in times of need. When we need someone to turn to and it seems that everything in our world has gone wrong, we can always look to God for comfort in our moments of struggling. 94 Feet references several Biblical scriptures that are also a great reminder in times of need. Finally, it helps us to remember that prayer is a critical action in this kinds of dire situations.

Produced by Chip Rosetti and featuring some popular actors, including Larry Wilcox (Co-star Captain Jon Baker on the 1970’s TV show C.H.i.P.S.), this incredible movies is a wonderful reminder and an encouraging story. Featuring a gripping story and intense drama, this movie will have you on the edge of your seat in anticipation, fear, and hope.

CHIP ROSSETTI (Writer/Director/Producer) – Chip has dedicated his career to making movies ONLY in the Christian, Faith-Based and Family genres, and has produced 15 feature films in these genres. His first feature film, “Fathers”, was released in May of 2012 and is still selling worldwide. He followed that with a Romantic Comedy titled “The Accidental Missionary”, which is slated for release in 2013. He then returned to the world of drama with “HomeFront”, which was released worldwide on July 2nd, 2013. In April of the same year he began production on his fourth feature “Right To Believe”, released in February of 2014. Since then, Chip has produced and directed “In Gramps’ Shoes” and “The Gospel Writers’ Autographs”.  Chip has also produced 9 documentaries ranging in topic from sports to drug abuse. His most successful documentary, “No More Sunsets: The Last Days of a Meth Addict”, was released in 2007 and has sold thousands of copies worldwide and has been featured in over 700 newspapers and radio stations. Chip has been seen on CNN, Fox News and MSNBC talking about “No More Sunsets”.

About The Executive Producer:

LARRY WILCOX – 70’s and early 80’s TV star was born on August 8, 1947 in San Diego California, the product of a broken home.  Raised on his grandfather’s ranch in Rawlins, Larry was a quiet, introspective youngster but grew up fast and worked occasionally in the summer on sheep and cattle ranches. He trekked to Los Angeles, following high school and a year in college, and worked a series of menial jobs while learning the piano in order to pursue a music career. The love of acting, however, finally won out. In order to avoid the draft, he interrupted his acting studies by enlisting in the Marine Corps Reserve in 1967, and wound up serving over a year in Vietnam as an artilleryman. Discharged with the rank of Sergeant, he went back to college and focused briefly on a career in dentistry before resuming his acting training on the west coast.  In 1977, he hit the jackpot when he won the role of “Officer Jon Baker” in CHiPs (1977). An accomplished motorcycle rider, horseman, race car driver, and jet skier, Larry performed many of his own stunts. He and co-star Erik Estrada became major TV idols with Estrada taking a slight edge as the “bad boy” charmer.  Not seen much since, the father of five children currently lives on his ranch in the San Fernando Valley with his third wife and their two children.

Get One For Yourself:

**********************************
Disclaimer: I, Jamie Tomkins, own and operate TigerStrypes Blog located at www.tigerstrypes.com. From time to time you’ll hear about my real life experiences with products and/or services from companies and individuals. Let it be known that I have an affiliation with the said company, but have not received monetary compensation for reviewing their service/product. The DVD was given to me by the company or any agents of the company to review on my blog. The review that I give regarding the product/service is based off my own personal experience; I do not guarantee that your experience will be the same.
17 Comments
Newest
Oldest Most Voted
Inline Feedbacks
View all comments

It had a great story, Crystal.

It’s definitely a great one, Kim!

Thank you for expanding my movie horizons – I have NEVER heard of this movie but it seems interesting and since fiance is gone this week, I will have some evenings free to watch some movies!!

[…] the country and the faith based film is now garnering great reviews. Check out the latest review HERE. The film is also now available at Walmart stores nationwide as of today. You can order it online […]

CJ Across the Avenue

I hadn’t heard of this, but it sounds great. I think it’s a movie my husband and I could watch together, which doesn’t happen often. 🙂

Author
Jamie
Reply to  CJ Across the Avenue

I agree! You don’t come upon those very often! 🙂

This sounds like an interesting movie, one I may very well watch if only for the background story of the coal miners.

It was a great story, with a way of teaching you something about life! 🙂

This is definitely one that hubbie and I would really love to watch. I’m sure the boys would enjoy this, too.

It was a great movie, Sharon – I definitely recommend it!

This is a movie that I want to see. I need to find this on at my store.

It was definitely a great movie, Tara!! My son even enjoyed it! 🙂

To each their own. That’s why there are so many movies to choose from.