I received the “When Calls the Heart – A Telling Silence” movie from Elliott with Edify Media, Inc. and was asked to watch the movie and post a review on my blog about it.  I had already seen the first “When Calls The Heart” movie, and loved it, as well as the 2nd in the series called “Lost & Found“-  you can find my review on the first one here, and the 2nd one here.

Once again a great movie – I just love the ones you can sit with your family and enjoy together without worry.  With this story, there were definitely some tears and laughter.  Absolutely loved the story and seeing what is happening that is based on the last movie, etc.  These DVD’s are wonderful, because you could either watch them as a series, or each one on it’s own and not really miss anything.  The story as a whole is great, and I’ve been blessed to be able to see it from the beginning, but if I was someone just seeing this series, I would be content to start watching it where it is….and then purchasing the rest!!

Now that I’ve seen the first three, it’s like my heart is fluttering for the next installment.  You want to know how things are going, and if they will ever get rid of the mean guy in charge of the town…fingers shaking…what will happen???  Can’t wait to see more!

When Calls The Heart – “A Telling Silence” 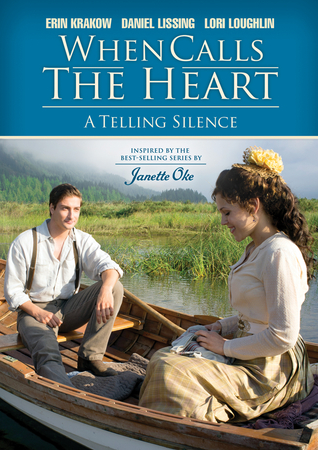 When Calls The Heart – A Telling Silence:  Elizabeth Thatcher takes a special interest in one of her students, 8 year-old Rosaleen Sullivan, who has been selectively mute since her father passed away in the mine explosion. Elizabeth is sitting with Rosaleen at lunch when she has to break up a fight between two boys, she returns to find that Rosaleen is missing.

Meanwhile Jack Thornton the towns Constable has reopened the investigation of the church fire that occurred three months prior. As Jack is returning a coal caddy he borrowed from Cat Montgomery, he notices a stash of the very same whale oil found at the site of the church burning. He questions Cat about her whereabouts the night of the fire.

When Calls The Heart A Telling Silence is the 3rd installment of the renowned Hallmark Channels When Call the Heart Series, authored by Janette Oke director by Michael Landan Jr.

“A TERRIFIC SERIES FOR THE ENTIRE FAMILY”
-Dove Foundation

"When Calls The Heart - The Dance" - Tiger Strypes Blog

[…] I received a new DVD called “When Calls the Heart – The Dance” movie from Elliott with Edify Media, Inc. and was asked to watch the movie and post a review on my blog about it.  I had already seen the the other “When Calls The Heart” movies before this, and love them, you can find my review on the first one here, the 2nd one here and the last one here. […]

I always longed to spend more time with my grandmothers but they lived far away when I was growing up. Miss them so much.

I have been wanting to watch the Hallmark Channels When Call the Heart Series, but have not had any luck finding here in Japan. I will have to be on the lookout for the DVD.

I love Janette Oke! So excited to see this!

More often, it’s “I need to let them know I’m thinking about them.” This comes in the form of a note or a starbucks card or some other thoughtful gesture.

That’s sure nice of you!! Everyone that knows me, knows that coffee shows me love!! ha/ha

I would love to have the opportunity to spend more time with my extended family. We are all over the U.S. and keeping in touch can be tricky.

What a sweet movie for the whole family. I think this one is going on the to-buy list!

I needed to spend extra time with a friend when she lost her job. We became better friends.

How nice of you to care so much Tara – strong friendships are built in weak times!

It’s such a good feeling when you can find a series to watch that you really look forward to seeing, and satisfies your entertainment needs. I feel the need to spend more time with my Grandma, but she lives on the other side of the country. I really should call her.

We always get that feeling of “I have to call” and then life gets in the way. I try to make sure that when I think that, I take a few minutes to call mine, as well. She’s over 9 hours away, so staying in touch is important! 🙂