So starting on this beautiful Monday of the week, I’ll give you a little look into my life and past with “Things That Brings Back Memories” for me.  This Too Shy song by Kajagoogoo is one that a lot of us from the 80’s remember.   It was one of those all of us knew the words for and heard at parties, or the skating rink.  Have you ever heard of this song before?  Check it out here:

Is there a song from back in the day, that brings back memories for you? or an area that you lived?  Leave a comment and let me know.

Things That Bring Back Memories - Who remembers Too Shy by #Kajagoogoo from the 80's? #MondayMemories Click To Tweet

About the Too Shy Song: 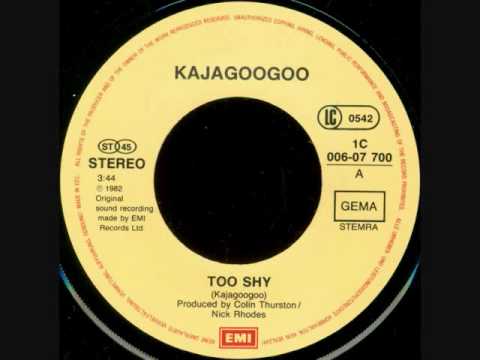 Too Shy is a song written and recorded by English band Kajagoogoo, released in 1983. The first single from their debut album White Feathers, the song was an immediate hit and reached number one on the UK Singles Chart for two weeks. It was also very successful in other European countries, spending five weeks at number one in Germany, and reaching number two in Switzerland, and number four in Sweden, Austria and the Netherlands.

Assisted by heavy rotation on MTV, the song later became a success in the United States, peaking at number 5 on the Billboard Hot 100.  “Too Shy” is Kajagoogoo’s only significant hit in the US, where the band is widely regarded as a one-hit wonder. In the UK, however, Kajagoogoo had further hits, including two more top 10 singles: “Ooh to Be Ah” and “Big Apple”, both in 1983.

The video for the song cast model Carolyn Espley (later wife of Dennis Miller) as a waitress cleaning up a nightclub at the end of the night. As the band performs the song on the club stage, she has visions of dancers from different eras populating the dance floor.

The song was an immediate hit, topping the UK Singles Chart for two weeks.  It was also very successful in other European countries, spending five weeks at number one in Germany, and reaching number two in Switzerland, and number four in Sweden, Austria and the Netherlands.

The 12″ maxi single’s B-side, “Take Another View”, a non-album track, often performed live, was included on the 2004 re-issue of White Feathers, which contained several bonus tracks, including the instrumental version of “Too Shy”, originally featured on the B-sides of both the 7″ and 12″ singles. 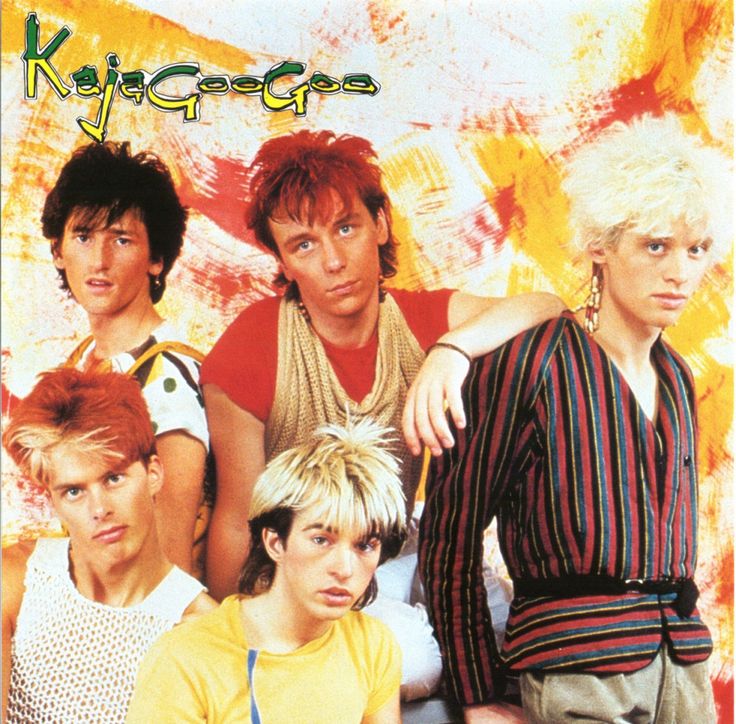 Kajagoogoo are a British new wave band, best known for their hit single “Too Shy”, which reached No. 1 in the UK Singles Chart, and the Top 10 in numerous other countries.  Formed in Leighton Buzzard in 1978, the band were originally known as Art Nouveau, a four-piece avant-garde group, with Nick Beggs on bass guitar, Steve Askew on lead guitar, Stuart Croxford Neale on keyboards, and Jeremy “Jez” Strode on drums. Art Nouveau released a track called “The Fear Machine”. The single sold a few hundred copies, and was played on the John Peel show, but the band were unable to get a record deal.  In 1981, they advertised for a new lead singer, ultimately auditioning and choosing Christopher Hamill, who then went under the stage name Limahl (an anagram of his surname). The name of the group was then changed to Kajagoogoo, coined by phonetically writing out a baby’s first sounds, which gave them ‘GagaGooGoo’ – and with a minor alteration, it became ‘Kajagoogoo’.

The band signed with EMI Records in July 1982 after Limahl, while working as a waiter at London’s Embassy Club, had met Nick Rhodes of the group Duran Duran.  Rhodes proceeded to co-produce the band’s first single, “Too Shy” with Duran Duran’s EMI producer Colin Thurston. The single was released on 10 January 1983 and went on to top the UK Singles Chart.  Follow-up singles “Ooh to Be Aah” and “Hang on Now” also both reached the UK Top 20, and the group’s debut album White Feathers reached No. 5 in the UK Albums Chart.  After being the support act for the Birmingham band Fashion in late 1982, Kajagoogoo embarked on their own headlining White Feathers tour in Spring 1983 (with the show of 31 May at the London Hammersmith Odeon being filmed and released on home video).

As success came, tensions began to rise in the band, which eventually culminated in Limahl being fired by the other band members in mid-1983 and Nick Beggs then taking over as lead singer. Limahl accused the others of being envious of him and said “I’ve been betrayed!” and “I was sacked for making them a success.”  However, the other band members went on record as saying that Limahl was an egomaniac and had become increasingly difficult to work with. Soon after Limahl’s departure, Beggs commented that, “It was a business decision and not one we took lightly. He wanted the band to go in a different direction to the rest of us. Eventually, we realised we were on a different planet to Limahl.”  Beggs also stated that the band harboured no ill-will towards Limahl, and blamed the press for sensationalising the matter. Guitarist Steve Askew commented “At first … we did everything possible to make Limahl feel like part of the furniture but, you know, his lifestyle is so different from ours. We’re very normal people whereas Limahl likes the bright lights.”

The first single by the new four-piece Kajagoogoo, “Big Apple”, was released in September 1983 and reached the UK Top Ten. Their next single, “The Lion’s Mouth”, was released in February 1984 and made the UK Top 30, but after that public interest waned and their next single “Turn Your Back on Me” failed to make the Top 40. The subsequent new album, Islands, was also a commercial disappointment, peaking at No. 35 in the UK.  In the US, the band first adopted the Kaja moniker at this time, and a different edition of the Islands album was released there as Extra Play, peaking at No. 185 on the Billboard charts. However, the single “Turn Your Back on Me” did well on the US Dance Charts peaking at No. 2 for two weeks.  Limahl, meanwhile, went on to equally brief success as a solo artist.

Strode then left the band and, in an attempt to gain some credibility and to lose their bubblegum image, the remaining three members relaunched as Kaja in the UK in 1985. Following the name change, the band released the single “Shouldn’t Do That” (UK No. 63) in August 1985.  The song was featured on their third album, Crazy People’s Right to Speak, but this too was unsuccessful. In December 1985, the band split up.

The original five-piece line-up of the band briefly joined forces again on VH1’s Bands Reunited in 2003. Following the much publicized VH1 reunion, the original group received many offers and incentives to continue to play together, but disagreements continued between the band members and the reunion was short-lived; with Limahl and Strode both departing the band again shortly thereafter, ultimately leading to the group dissolving the following year. The group felt that the VH1 feature was unfairly edited to portray simplified reasons as to why Limahl was fired and Strode had left the band in the 1980’s. 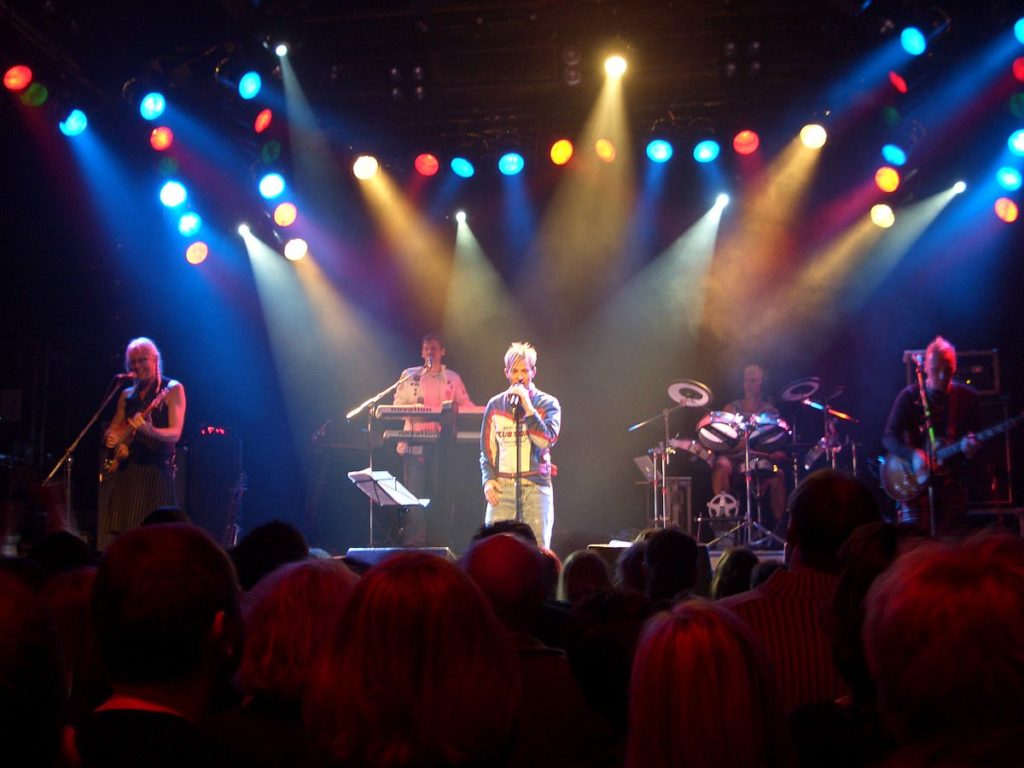 In 2007, Nick Beggs, Steve Askew and Stuart Neale decided to continue the Kajagoogoo reunion, releasing the single “Rocket Boy” on 24 June 2007. The single received airplay on Steve Wright’s BBC Radio 2 show in the UK, and a new album, Gone to the Moon, was scheduled for release on the Spectra Records label later on that year. However, the album was postponed and in February 2008, the three Kajagoogoo members announced plans to reunite with original members singer Limahl and drummer Jez Strode. This was due in part to Bradley Snelling, the organiser of the Retrofest event and the band’s new manager. Snelling had succeeded in reuniting the band, arranging their first photo shoot together in 25 years.

The band wrote on their official site that “The atmosphere was relaxed, jovial and, after 25 years, Kajagoogoo, in their original five-piece line-up are back”. Since reforming, the band have written new material, released an EP, and have extensively toured throughout Europe (with the first date taking place in Denmark on 14 June 2008, at Esbjerg Rock Festival, where they performed the 16 tracks off the remastered edition of Islands, including encores and B-sides, such as “Monochromatic” or “The Garden”). Their Gone to the Moon album, recorded as a three piece outfit prior to the full reunion, was made available via the live shows and “Kajashop”, the band’s online store.

In August 2009 and in addition to the reunion tour commitments, Kajagoogoo again took to the stage to headline the ‘Hobble on The Cobbles’ all day music event in Aylesbury in Buckinghamshire. This was followed in September by a new compilation CD/DVD, released by the band’s original label EMI Records, called Too Shy – The Best of Kajagoogoo & Limahl. It featured two newly recorded tracks, plus a brand new promotional video for “Space Cadet”, one of the new recordings. Quick to capitalise on the renewed interest in the band, EMI released the “White Feathers (Manhattan Clique Remixes) EP” in December 2009.

In December 2009, Kajagoogoo performed their last remaining UK concert with a return to The Stables venue in Wavendon, Milton Keynes. In March 2010, dPulse Recordings released the Kajagoogoo track “First Girl on Mars” as a part of the Who Made Your Music? benefit CD, released to raise funds and bring awareness to the rights of marginalized women.  On Saturday 17 July 2010, Kajagoogoo performed at the Midland Music Festival in Tamworth, and later performed at the Rewind Festival in Henley-on-Thames in August. Continuing their renewed interest in the Kajagoogoo back catalogue, EMI Records released So80s Presents Kajagoogoo as a part of the So Eighties series curated by Blank & Jones. The album contains extended mixes of classic Kajagoogoo tracks and was released on CD and digital download format. Also made available digitally in April 2011, Kajagoogoo’s Gone to the Moon album was given a digital release via iTunes.  In June 2011, Kajagoogoo released their first single as a five piece since 1983. The track, “Death Defying Headlines”, was released as a digital single as both a single edit and an extended dance remix.

OMG the hair! I remember my 80’s hair 😀 Thanks for the flashback!

I wish I would have taken out stock on Aqua Net back then! 🙂 Thanks for stopping by!

I forgot about this song completely! Thanks for sharing these blasts from the past on Monday!

Back in the days before YouTube, huh? That’s why I love bringing back these amazing sounds! 🙂

I have heard of Too Shy but barely remember it. After listening I remembered. Duran Duran being involved I’m surprised they didn’t go further here. Keep the songs coming!

I agree, Gladys – that could have been interesting!

What fun! I had never heard of this song but love hearing stories of musicians and how they created their music!

It is always nice to hear how they got the ideas, etc. 🙂 Thank you for stopping by!

I have heard of this song but I wouldn’t have been able to tell you the name of the band! thanks for bringing back memories!!

We didn’t have Shazam back then, so most of them were unknown. 🙂

No, I never heard heard of this group or this song–but just now listening to it I can understand why it was a hit! There are many songs that bring back memories for me–one is Michele by the Beatles!

That was a great song, for sure!