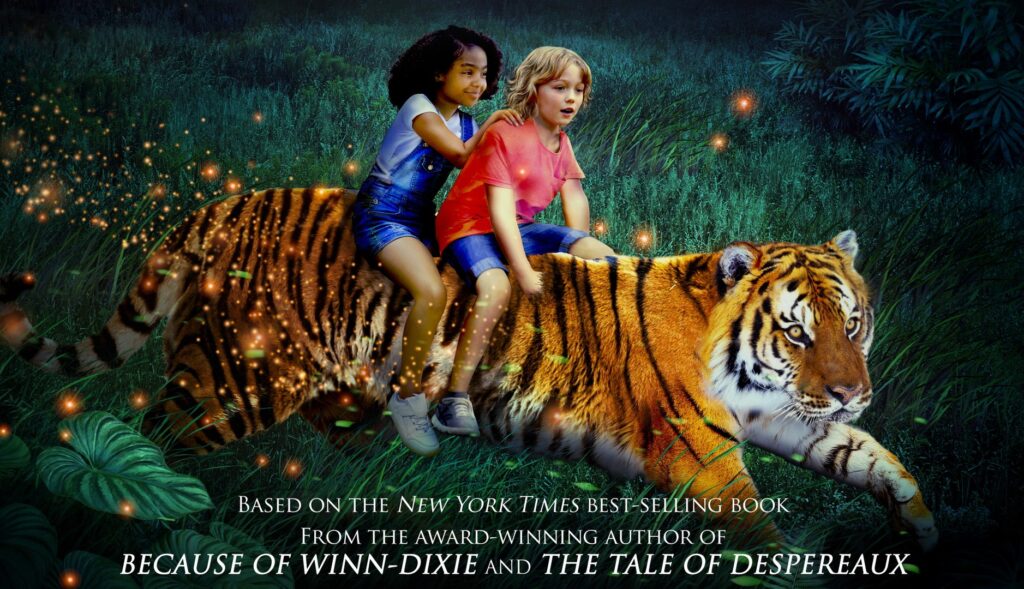 The Tiger Rising Film Review
#TigerRisingFilmMIN #TigerRisingFilm #MomentumInfluencerNetwork #TheTigerRising
If you know me, you know that I LOVE TIGERS!!! So much so, that I have some that are with me “permanently!”  I also have them around the house, all over my Jeep (which is named White Tiger) and anywhere else that I can put them!

Since I was little, I wanted a real tiger, but knowing the upkeep needed, and the expense of caring for them the right way, I decided to just have their likeness added to my arms. I would rather them be in the wild, or cared for by those that can do it the right way!

When I first saw the previews for The Tiger Rising movie, I was a bit worried when I saw the tiger in the cage. It reminded me of that dumb show that was the rage during the pandemic, and I just wasn’t sure if it would be any good. After watching it, I was amazed at some of the scenes where the boy was kind of daydreaming.  The little wood pieces that he had whittled would start talking, the stars or clouds would turn into something else.  It was really great work by the movie team.  I love when we can see what people are thinking, in a sense.

The boy’s story is a hard one.  It takes awhile to get the whole picture of it, with flashbacks of his Mom, and history of his current life.  Once you understand everything, it makes a bit more sense.  The little girl that he meets on the bus that just moved there has a real problem with anger, but once you understand her story, that too makes you feel for her.

As far as the end of the movie, I won’t give away, but I was not happy with it.  I understand the meaning behind what happened, but it was not the way I wanted it to end.  All in all, I would say that it’s a twist on having your feelings caged up, and wanting to let them out, but knowing that the risks outweigh the benefit.  Sometimes though, that’s the only right thing to do. Once you let those feelings out of the cage, anything can happen.  In the instance of The Tiger Rising story, the negative thoughts were able to be let go and peace had in a few lives.  Sometimes though, doing that can have a very negative turn for others that are a part of the story.

I don’t want to give stuff away, but I feel the main focus is to not let negative emotions stay caged up inside of you.  Let them out and let your heart be free of things that you cannot change, no matter what the final outcome.

About The Tiger Rising Movie: 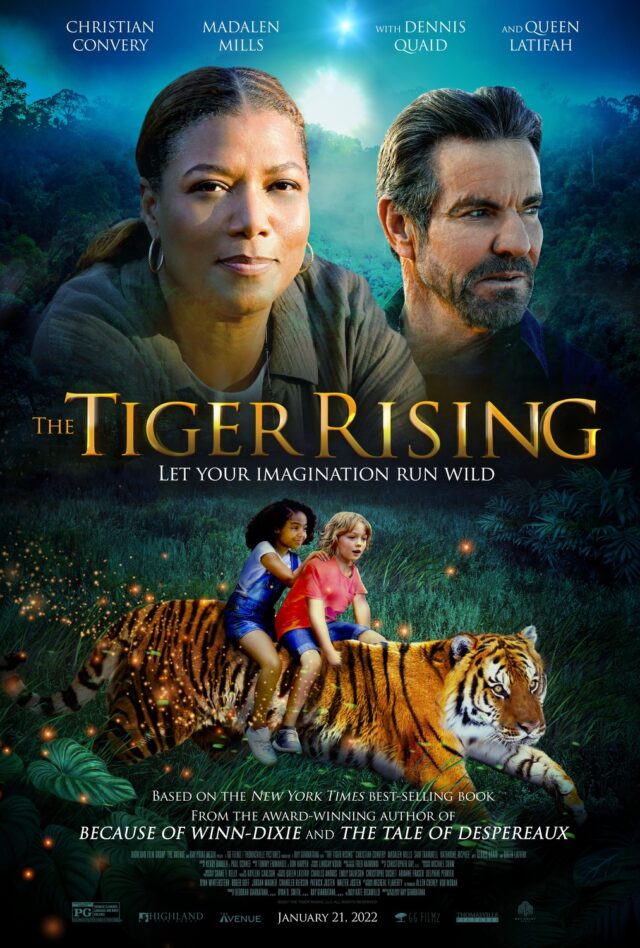 Queen Latifah and Dennis Quaid star in this beloved tale based on the New York Times best-selling book by Kate DiCamillo. When 12-year-old Rob Horton (Christian Convery) discovers a caged tiger in the woods near his home, his imagination runs wild and life begins to change in the most unexpected ways. With the help of a wise and mysterious maid, Willie May (Queen Latifah) and the stubborn new girl in school (Madalen Mills), he navigates through childhood memories, heartache, and wondrous adventures in this heartwarming adaptation.

THE TIGER RISING is about cages…the cages we build to protect ourselves from hurt, loss and pain.

The story is told through the eyes of Rob Jr., an imaginative 10-year old boy who is dealing with the loss of his mother. I felt it was important that we told this universal story in a mature and honest way that would resonate with all ages, even though the film’s main characters are children. The film also takes us into the mind of Rob’s magical imagination — the way he sees his world and how he copes with his circumstances.

Another theme in the film is that not everyone responds to pain the same way. Rob’s new friend, Sistine, is dealing with the pain of her parents’ divorce. Instead of holding everything inside, like Rob, she acts out boldly, both verbally and physically, and also in contrast to her more natural self as seen in her reactions to Rob’s drawings and carvings.

Adults are no different. Rob’s father is struggling with his own grief over the loss of his wife, Caroline, which has changed his world dramatically and left him alone to raise his child. We can see his struggle to connect with his son during this time, knowing especially that Rob Jr. and his mom shared a special bond.

Willie May is the heart and soul of the film, essentially an angel in the form of a simple hotel maid. She speaks to the children through her years of life experience and her own hidden pain, meeting them right where they are. Her words are honest and true, and reach deep inside Rob and Sistine.

I wanted the film to have a thoughtful pace to enhance the feel of Rob’s world in rural northern Florida — the humidity in the air, the dew on the ground in the woods — the unrushed life of a child. I remember discovering Tommy Emmanuel’s lyrical guitar incredibly moving and inspirational when I wrote the script. We used his guitar as a kind of “lead violin”, if you will, then surrounded his guitar with the orchestra, giving the film presence and emotional weight.

We crafted the camera work to be personal and unobtrusive, to help take the audience further into the story. The color palette and production design were specifically chosen to reflect Rob’s fond memories of happier times when his mother was alive compared to the present, where Rob’s world is colder and emptier.

And, of course, the tiger. The majestic animal that Rob finds in the woods behind the motel where he lives is symbolic of his emotions — they’re both in cages. The film explores the complications of opening up both of these cages and the release it finally brings. Ultimately, I hope the film resonates with children and adults alike, reminding them that they’re not alone, and giving them courage and hope to just take that next step towards healing and freedom. 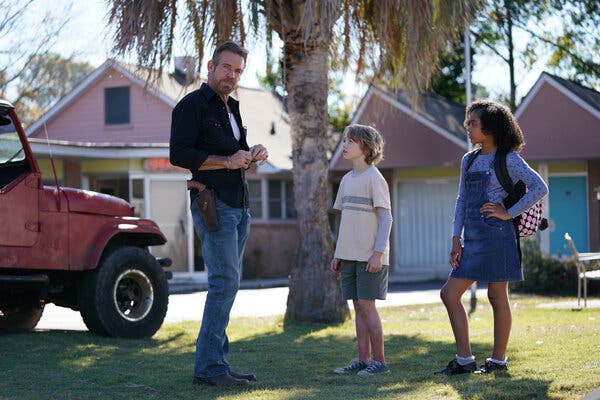 This movie was adapted by the original book by Kate DeCamillo.

Get your copy here: 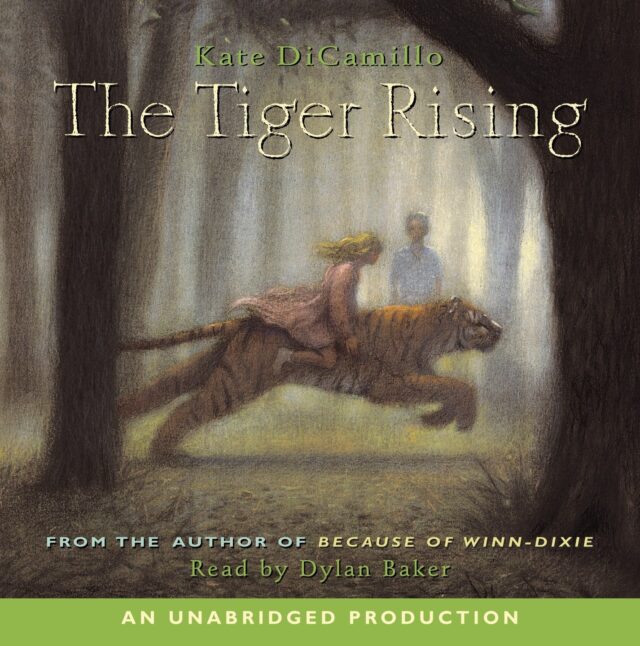 Enter the Giveaway:
(Prize: Digital code for The Tiger Rising) 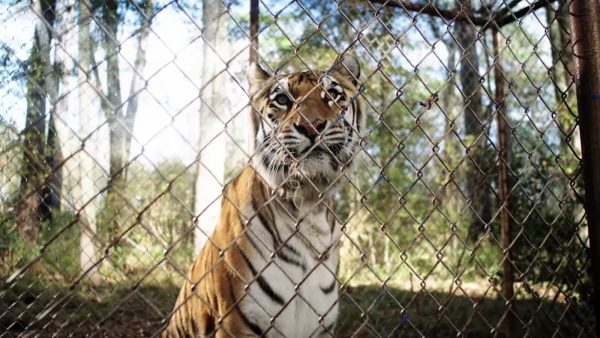 Connect With The Tiger Rising:

I have not heard of this one. It has good actors in it so I bet it is good.

It has a great story. It was even shown at our local theater and that’s saying something! ha/ha

This movie sounds just like the type of film I love to watch. Queen Latifah has always been a favorite, too. Will have to check it out!

She does the best job in this one, in my opinion.

Sounds terrific. Also has a great cast. Loved your review.

I know the feeling of having negative thoughts in my mind and struggling hard to let go. I want to learn about the story here. I love Queen Latifah as she always does good acting. You make the movie sound so great that I can’t wait to see it!

It’s got a good story, but takes awhile to understand it all. The end made me kind of sad, too. 🙁