For this “Things That Bring Back Memories” post, I am going to change this up a bit.  I usually stick to TV, music and film, but figured that there are a lot of other things that bring back memories for many of us, so it would be fun to look at them to.  The thing I’m going to pick today is the Snoopy Sno-Cone Machine from the late 70’s & 80’s. 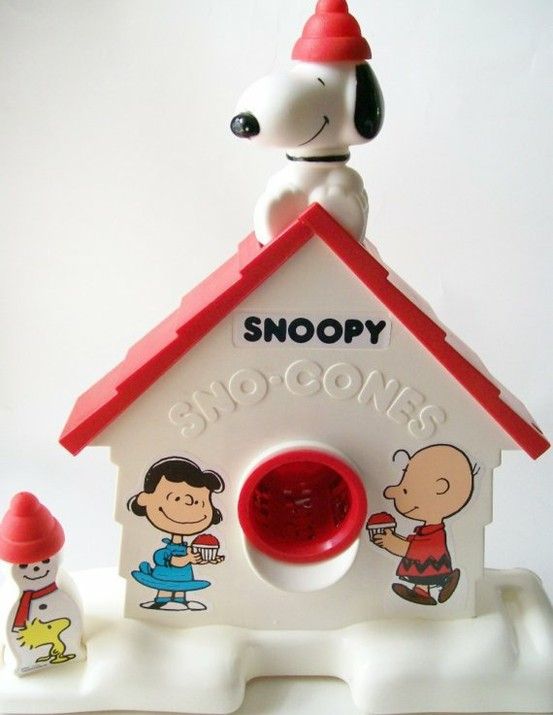 The Snoopy Sno-Cone Machine was from the Hasbro company and was one that you had to crush up the ice cubes with a twisting action.  I remember later in the 90’s or some other time that it got recalled, or stopped being made due to cuts, etc.  I see now that it’s back again and people are complaining like crazy about bloody fingers…whatever…suck it up buttercup!! ha/ha

We always loved making our sno-cones and then adding the syrup from the little snowman guy (or whatever the heck he was).  Then we would do the old tradition of showing our red or blue tongues to everyone else.  What a time of life to be able to have fun just doing that.  No electronics, no high end expensive toys…just ice, syrup and color shows!!

For those that don’t remember it, here’s the TV ad from long ago:

The Snoopy Sno-Cone Machine was something that almost every kids wanted, or visiting someone’s house who did!  Did you ever have one, or get one later in life for your kids?  What did you think of it? 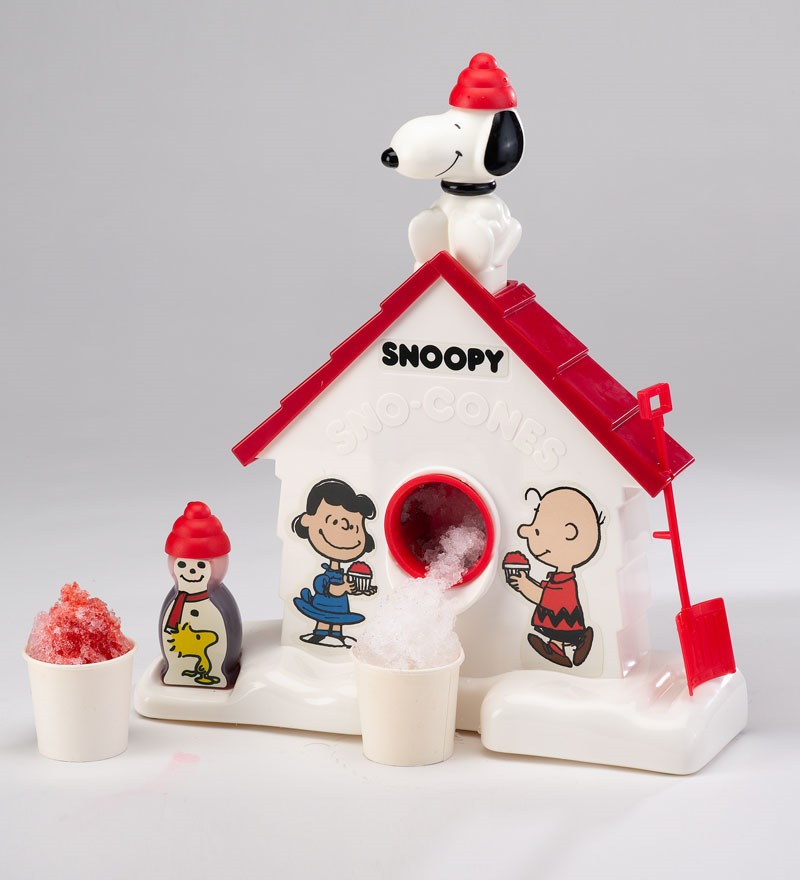 It was named one of the 100 best toys in history by no less an amusement authority than TIME magazine. It’s been in near-perpetual production for nearly 40 years, an eternity in the kids’ product market. It taught children about the value and reward of hard work, because it was kind of a huge hassle to use.

It’s the Snoopy Sno-Cone Machine, the heir apparent to the Easy-Bake Oven in the culinary toy genre. Introduced by Hasbro in 1979, it’s become a perennial favorite of Peanuts collectors, ‘80s nostalgia addicts, and kids who enjoy breaking a sweat by hand-cranking their own flavored ice shavings.

The rough idea for the machine was invented by Hasbro (then known as Hassenfeld Brothers) designer Sam Speers in the early 1960’s. Speers developed the Frosty Sno-Man Sno-Cone Machine, which spit out chunks of ice through Frosty’s gaping belly. After kids stuffed cubes into the top of his head and turned the hand crank on the back, they could fill up a (small) cup and flavor it with the included sweetener. Budding entrepreneurs were encouraged to charge their friends for the treat with the included sales sign.

Frosty endured well into the 1970’s, at which point Hasbro took notice of the potential for a cast change. By this time, Charles Schulz’s Peanuts had become a licensing phenomenon like no other. By 1967, mini-boutique shops were set up in department stores to centralize the volume of merchandise: plush dolls, shirts, night lights, and books.

To maintain focus on his art, Schulz opened a business office strictly for business deals, the Charles Schulz Creative Development Corporation, in 1970. (While employees were expected to maintain quality control, the sheer volume of licensees meant the occasional slip: Charlie Brown sold razor blades in Germany before Schulz put an end to it.)

In both the strip and in ancillary products, it was Snoopy who took center stage. The beagle was at one point the most popular licensed character of any in the retail business, which made a revised Sno-Cone machine with the dog perched on top a can’t-miss proposition for Hasbro. Thanks to the annual airings of A Charlie Brown Christmas, the characters had always held wintry, cold connotations. So Frosty was phased out, and Snoopy was brought in.

Despite the tendency for some children to violently mash action figures in the internal ice-shaving mechanism and the labor involved in getting even a small cup of ice, the Sno-Cone Machine sold so well for the next 25 years that Hasbro CEO Al Verrecchia called it an “annuity” in 2004. “It just keeps coming off the line, year after year,” he said.

Toy and crafts company Cra-Z-Art took over the license in 2012, making a near-identical Snoopy Sno-Cone with only a few exceptions. According to Cra-Z-Art spokesperson Charlie Zakin, the hand crank is easier to turn and the unit now has a clamp to secure it to a table during operation. And yes, it still comes with the tiny red shovel. 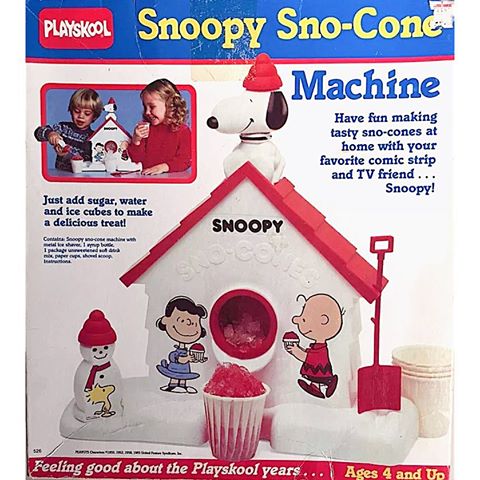 Who remembers the Snoopy Sno-Cone Machine? Did you ever have one when you were younger? #TTBBM #TigerStrypesBlog Click To Tweet

Some Other Interesting Snoopy Sno-Cone Facts:

I don’t remember the sno-cone machine either but it looks like fun! #HomeMattersParty

It was a lot of fun – pretty much just like an ICEE, but you could make it at home! 🙂

Hahaha! My sister and I had one of these Snoopy Sno-Cone Machines. What fun memories. Thanks for sharing and co-hosting at the #HomeMattersParty 🙂

Who knew that shaved ice could be so much fun? 🙂

This is one throw back memory I don’t remember ever seeing. The Easy Bake Oven I did have growing up and plan to get my daughter one too.

Thank you for sharing the memory with us on the #HomeMattersParty.

It was definitely a popular one. We all had the oven, too – it’s amazing to see how unsafe it was. :/

We did not have these machine growing up. I did not know these existed until I saw them in some videos.Yet to taste one!! #HomeMattersParty

Shaved ice is great anywhere with flavoring. Being able to make it home just made it fun! 🙂

I remember the Snoopy Sno-Cone machine! (But I was more like college age then! I would have still probably loved one!) #HomeMattersParty

I figure even at my age now, they would be fun! 🙂

This brings back so many great memories! I loved my snow cone machine! Such a fun post! Thanks for co-hosting & sharing at #HomeMattersParty

It’s definitely one that a lot of people remember from childhood…and even now with the re-release.

I remember these from when I was little. I wanted a Snoopy Sno Cone maker so bad. They are so cute, I’m glad they made a comeback in 2012. #HomeMattersParty

Author
Jamie
Reply to  Nicole B.

I was surprised that they made a comeback – hoping that they are a bit safer now. 🙂