Skip to content
Thank you LEV3L T3AM for partnering with me on this blog post & for the great giveaway! 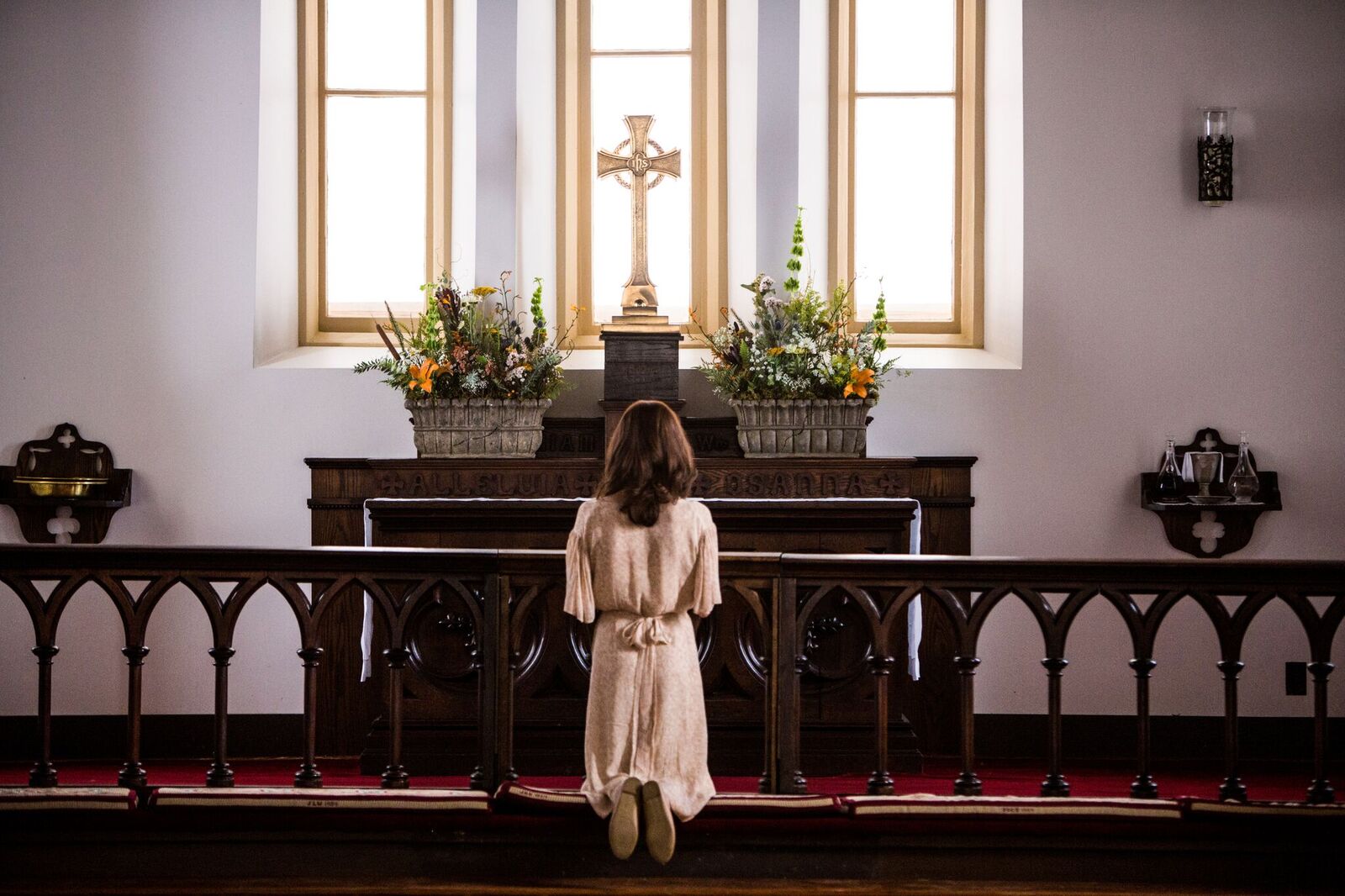 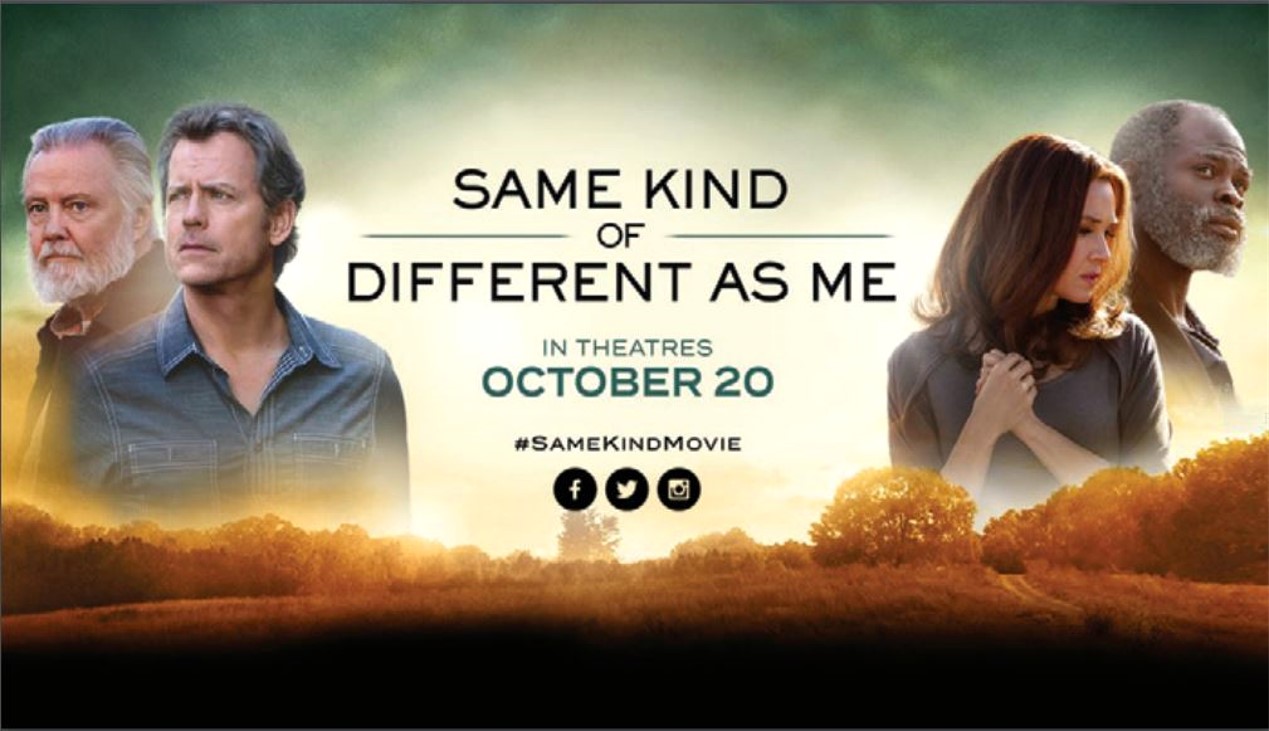 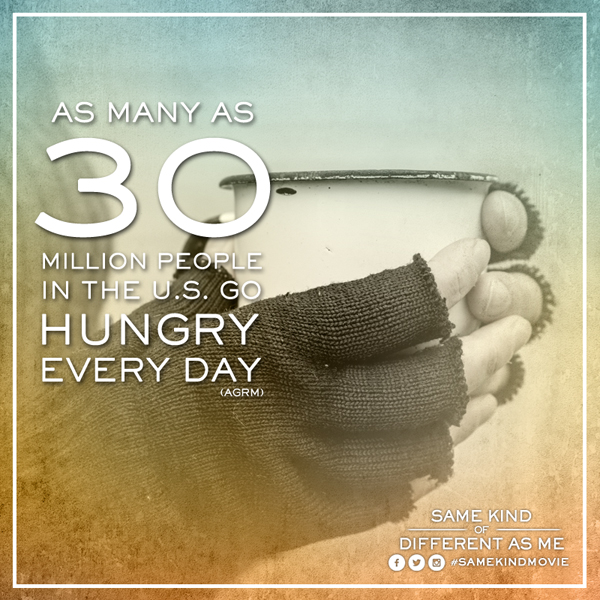 I recently heard about the Same Kind of Different As Me movie coming out from the LEV3L T3AM, and thought that it sounded amazing! I love stories like this and had never heard of the book before, which now I definitely want to purchase and read. It’s always fun to read the book and see the movie, or vice versa.

The story behind it all seems as one that we all need to remember. In today’s world of being important by how many followers you have and how much your total income is, it seems that most forget that we are all the same in most ways. Granted, we all live differently, deal with our own struggles and sometimes have some traits that many don’t approve of. Just because your income is lower, or you don’t have any at all does not make you any less of a person! Seeing the people behind the food ticket in the movie really makes you feel for all that struggle.

This movie looks amazing, and I cannot wait to see the full length film. The trailer itself, has me ready to go and then after that see what I can do to help those in the area that need it. Let’s all work together for everyone’s good and quit trying to be the one at the top of the ladder. You sure look a whole lot better when you have your hand out to help someone else take the step!

The Same Kind of Different as Me movie sounds amazing! Enter 2 win tix! #SameKindMovieL3 Click To Tweet
About the Movie:

SAME KIND OF DIFFERENT AS ME is based on the inspiring true story of international art dealer Ron Hall (Greg Kinnear), who befriends a homeless man (Djimon Hounsou) in hopes of saving his struggling marriage to Debbie (Renée Zellweger), a woman whose dreams will lead all three of them on the most remarkable journey of their lives. Jon Voight plays Hall’s father, with whom he reconciles thanks to the revelations of his new life. Based on the New York Times bestseller.

“Nobody can help everybody, but everybody can help somebody.” Words of wisdom from a homeless drifter; words that never would be shared with the world if not for a wayward husband, a forgiving wife, and an unforgettable true story that brought the three of them together. 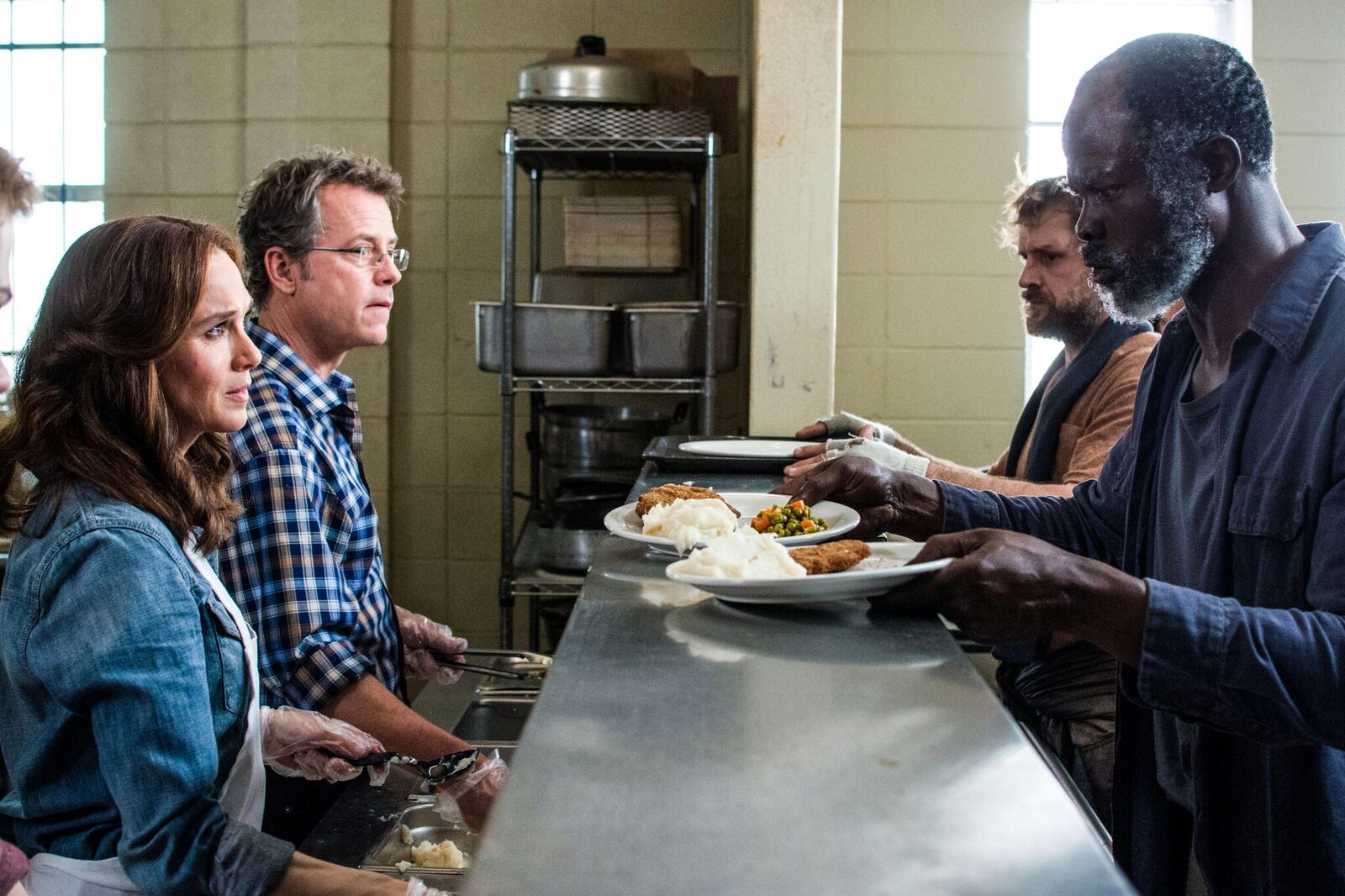 “Homelessness is epidemic and anyone who fights the battle to help correct the problem deserves our respect and appreciation. Denver Moore and Ron Hall did more than most to try to shine a light on this plight and, in doing so, revealed that perhaps the most powerful tool in battling homelessness is to simply engage the people around us whose circumstances have left them with less. Working with an excellent cast and crew to help tell the story of Ron’s challenging personal journey was a creative joy.”  —Greg Kinnear

With more money than they could ever possibly need, Ron and Debbie Hall have everything they could ever want … except for a loving marriage. When Ron’s unfaithfulness is brought to light, Debbie invites him to stay—as long as he remains truthful and does what she asks of him. But when her request includes serving the homeless at an inner-city rescue mission, Ron would prefer to write a large check instead. Guided by her faith and spurred on by the dream of a homeless man she senses will change their city, Debbie befriends a disenfranchised man named Denver. More surprisingly, so does Ron. Despite vast differences, their lives begin to intersect and they all are changed … forever.

The movie is based on the original book, which began outside a burning plantation hut in Louisiana… and an East Texas honky-tonk… and, without a doubt, in the heart of God. It unfolds in a Hollywood hacienda… an upscale New York Gallery… a downtown dumpster… a Texas ranch. Gritty with pain and betrayal and brutality, it also shines with an unexpected, life-changing love. 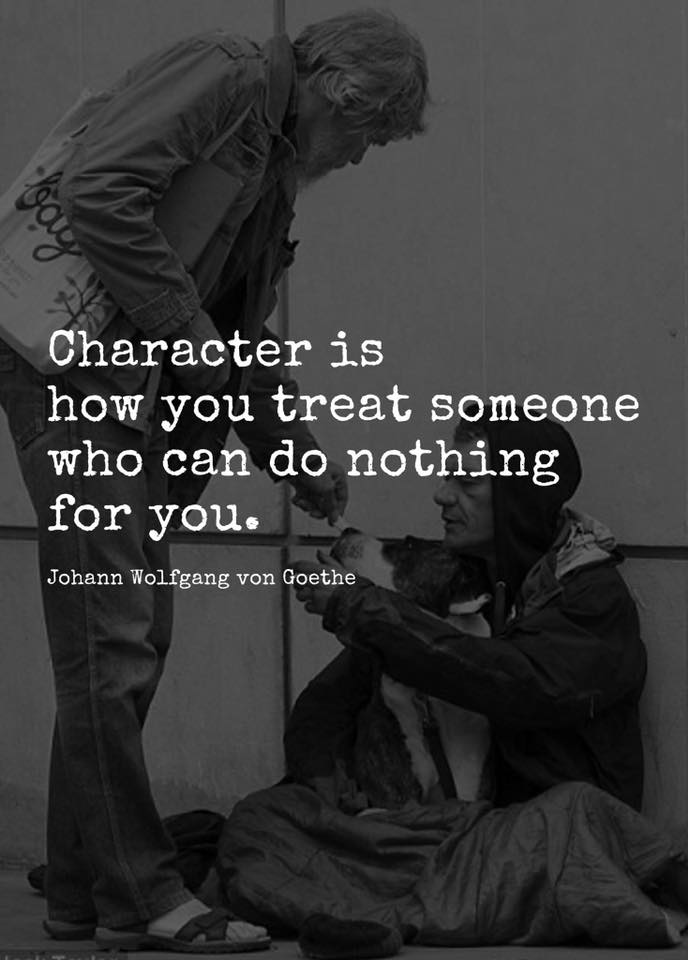 Ron Hall is an international art dealer whose long list of regular clients includes many celebrity personalities. He is the writer and producer of the Paramount Pictures film, Same Kind of Different As Me. An MBA graduate of Texas Christian University, he and his wife Beth divide their time between Dallas, New York, and their Brazos River ranch near Fort Worth.

Denver Moore served as a volunteer at the Fort Worth Union Gospel Mission until his death in March 2012.

Lynn Vincent is the New York Times best-selling writer of Heaven Is for Real and Same Kind of Different As Me. The author or coauthor of ten books, Lynn has sold 12 million copies since 2006. She worked for eleven years as a writer and editor at the national news biweekly WORLD magazine and is a U.S. Navy veteran. 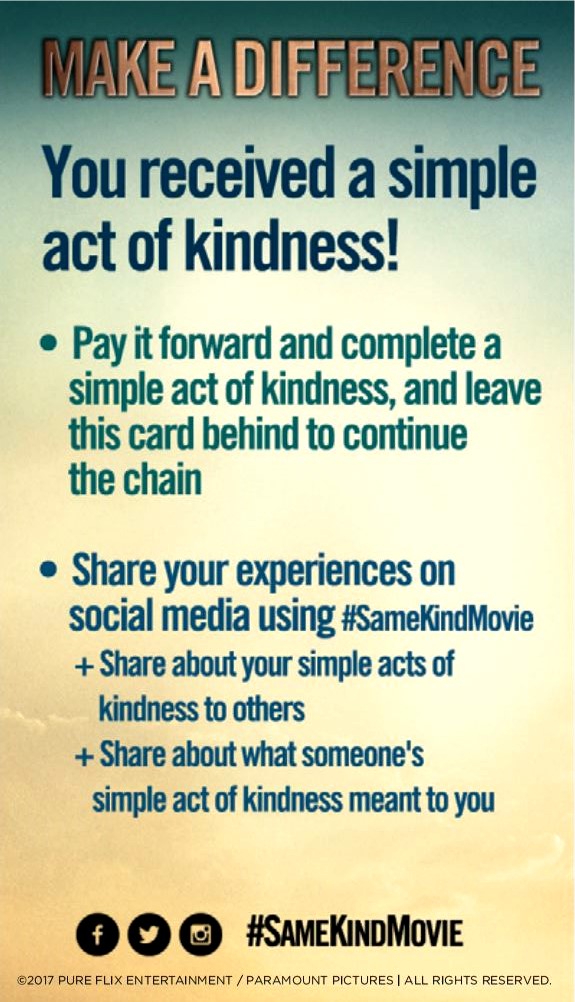 Buy a Copy of the Book:

Enter to win two (2) Fandango tickets to see the movie:

I haven’t been to the movies for such a long time and i am so out of touch with what a even out! Thanks for linking up with #TwinklyTuesday

I agree, Lisa – there’s no time, and most of the movies out aren’t appropriate for children. This one looks great, though! 🙂

I really like movies that are based on true stories. This looks like it will be a good one!

It definitely does, Leah! Thanks for stopping by!

I like the very concept and everything I have read thus far, ( to be truthful) I had to look for something not already known to me. I found it interesting that Ron had actually done wrong by his wife and she in turn gave him the chance to learn beyond anything he knew. I cannot wait to watch this either in theater or home.

It sure does sound like a great movie – I can’t wait to see it all, too!

This looks really good. I tend to go to cinema once a month. I will put this on my list of films to see. Pen x #TwinklyTuesday

It does look like a great movie – I hope it comes to our local theater.