*I received a copy of this DVD to review but I was not financially compensated in any way. The opinions expressed are my own and are based on my observations while reading this novel.*

I received a copy of the “Rumors of Wars” DVD from Elliott at Edify Media, Inc.  I hadn’t heard of this movie before, but just by looking at the cover, I was interested in it.  It looked like one that even my husband and son would even like.

There was so much action at the beginning and throughout the movie, it was definitely a great one to see.  My husband said he liked it, as did our son.  Said the story really made them think about the end times and what could happen to people still here on earth.

I loved seeing Mac Powell from Third Day in the movie – he’s really a great actor!! 🙂  I would love to find the “Rumors of Wars” song that they did as the soundtrack, the words and the music were amazing.  Definitely one I want on my MP3 player!!  Also, seeing Eric Roberts as the bad guy was different – he’s also been a great actor in every movie I’ve seen him in.  I recently saw him in “The Perfect Summer” DVD review that I got to do, and it was a whole other side of him.  Love how he makes you “feel” the character he is playing.

Seeing the way the world is heading, and things happening on the news, etc., it doesn’t seem like it will be long before God calls us home and the ones left here on earth, that have not accepted Him as Savior, will deal with these wars and the one-world government, chips, etc.  I pray that all of them will remain strong and ask God into their heart, so that they know, even with the dealings of war and pain – God will be there for them and allow them to join the rest of us in heaven, where no wars or pain will ever happen again.

In the end, we all worship something

Nashville, Tennessee – In the post apocalyptic future, Agent Shaw (Ben Davies, Courageous) works for the only surviving government working to bring order to a world full of decay and violence. Shaw offers little mercy to those that would stand in the way of the government’s edict, that everyone submit to an implanted chip that tracks their movements and 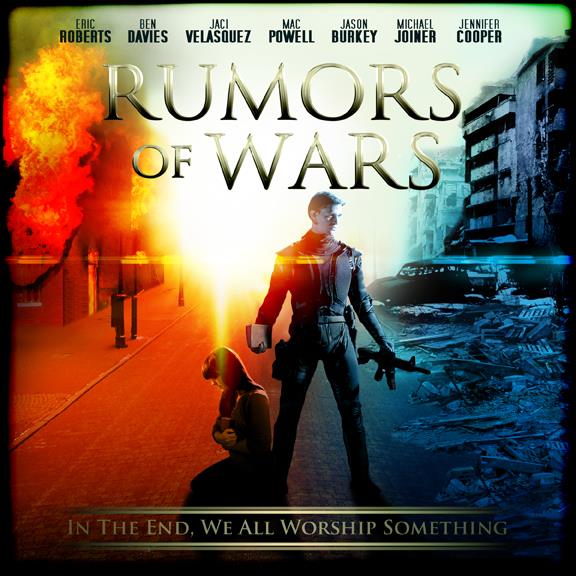 purchases. He is certain that those “zealots” that would put their belief in God ahead of the beliefs of society, could lead the world back on the road toward destruction. The zealots need to be eliminated. But his faith was challenged when he found a small book in the rubble near one of the “rebel” encampments- the diary of young college student named Roxy (Jennifer Cooper), who was at the eepicenterof the chip’s creation years before. She was a young aspiring journalism major whose life took a dark turn when she began researching Mr. Zurn (Eric Roberts, The Dark Knight), the man behind this implanted chip.

Rumors of Wars is a a suspenseful, action packed film that centers around two converging stories- the “last days” of our present and the final days of our future. Written and Directed by Paul Tomborello, and starring Ben Davies, Jennifer Cooper, and Eric Roberts, the DVD comes to stores November 11th. For more information or to see the trailer go to rumorsofwarsmovie.com.

Synopsis: An aspiring journalist, Roxy investigates end-times prophecies and discovers that the events described in the Bible are happening all around her. Years later, Shaw, an agent for the One World government, is hunting down rebels when he discovers her journal in the post-apocalypse rubble. What will he do with this new found truth?

About The Production Company:

Bearfruit Films is a privately owned production company that develops and produces high quality feature-length motion pictures that bring redemptive stories to life. We produce 2-3 feature films each year, which fill the market niche for genre films. We make films that are creative and unpredictable with integrity in presentation. There are scores of talented cast and crew who enjoy working with us.

I always tend to go with my gut, it hasn’t seemed to let me down yet! And it thinks that this sounds like an amazing movie!

thanks for reviewing ROW!

You’re welcome Nise – I loved it, and my family did, too!

Yes, I have experienced this…it had to do with the medical care of a loved one when I was a medical advocate. We went against the norm, and a 6-months-to-live diagnosis turned into 5 years’ living.

Wow Yona – praise God for that. What a difference!

It seems like with the kids stuff at school we tend to go against the norm. If they have school on Halloween we usually keep them home as to not promote celebrating. I know a lot of others think that odd!

Too bad what others think, Heidi – you’re doing what you feel right for your family, and that’s important! Proud of you!

I have to do this all the time when I use coupons and cashiers dont know the rules. I stand my ground and then speak with a manager.

I am feeling a little local pride right now because I live so close to Nashville. I have gone with my gut on many occasion, even walking out on social events if something felt off. I am happy to say, I’m usually right. This looks like a good family night movie, thanks for the chance to win it.