I received a new DVD called “The Perfect Summer” from Elliott with Edify Media, Inc. and was asked to watch the movie and post a review on my blog about it.  I received the DVD mentioned above for free in the hope that I would mention it on my blog. Regardless, I only recommend products or services I use personally and believe will be good for my readers. I am disclosing this in accordance with the Federal Trade Commission’s 16 CFR, Part 255: “Guides Concerning the Use of Endorsements and Testimonials in Advertising.”

I got an email to review “The Perfect Summer” along with the latest “When Calls The Heart” from Elliott.  I always reply with a big YES!! to let him know I’m interested.  I don’t think I’ve received a package yet that I haven’t been happy with.  In today’s world with all of the movies, etc. being advertised that aren’t something I would even want to watch, much less have my 13 year old son see, it’s a blessing to be a part of the promoting of these great films.  Family-friendly, ones that have an actual story and things you can learn from.  I so wish that there was more help in advertising these great movies and give the general viewing audience a choice of ones that are wholesome and not those you have to worry about covering your kids ears or eyes for, you know what I mean?

This story was one that at first I thought might be a knock-off of Soul Surfer, but it was far from that.  It had it’s own story and characters and was full of ones you could either totally relate to, feel like you knew, or the ones you went to school with that you always wonder what they thought of how they acted back then, you know?  It starts out with a Mom and her teenage son having to pretty much start over after things change in their life.  Heading to live with her Dad, the son “Jake” finds out things about his Grandpa that he never knew.  I think it was really neat to see that there are some things that family doesn’t pass on…and that’s for a reason! 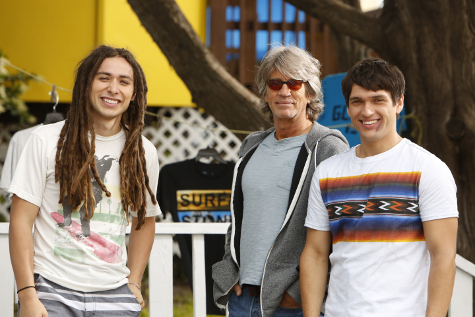 The story goes on with Jake learning how to surf, since the town they live it, that’s about all there is to do.  I was so proud of him for taking that step.  I would have been so scared to learn something new, especially around people that were very skilled in it.  There are the regular teenage issues of attitude and dealing with unfriendly people, but the end is wonderful!

I took away that the main point was that you don’t have to live the perfect life, or be the perfect person to feel valued and cared for.  I thank the Lord for that, for sure!  If you could only be loved for being perfect, I would definitely have issues! 🙂

On DVD – From UP & Swirl Films in assoc. with Level Path Entertainment 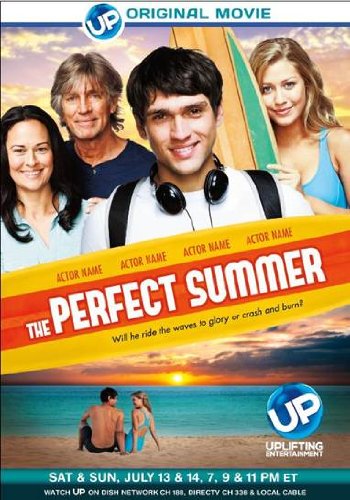 On an early morning in April in Wrightsville Beach, North Carolina, crew members for “The Perfect Summer” anticipated their first day of shooting. As the sun was rising, they greeted 15 local surf gurus hired to consult for the movie. Standing directly in front of the beach house that serves as the home of Lou, played by Eric Roberts’ character, they noticed 20-foot waves crashing onto the sand. The winds offshore were creating a dangerous rip current that even the film’s surf leader, Shawn O’Donnell, who had surfed there for years, felt was too dangerous for anyone from the cast to be out there that day. Several locals, however, were already in the water. From the dock leading up to the beach house, director Gary Wheeler watched on tensely as he noticed two swimmers being lifted by the wind, launched into the air and driven under water. Production members from Swirl Films put the cameras down to alert the film’s on site water safety patrol. Witnesses speculated the two swimmers may have drowned had it not been for the film crew on site that day. This is how the 14-day shoot for “The Perfect Summer” began.

In The Perfect Summer, fatherless teenager Jake (Adam Horner) was happy living in Chicago, until his mother (Sydney Penny) decided to uproot them to a small surfing town where her estranged father (Eric Roberts), Jake’s grandfather, lives. The transition isn’t easy for anyone and it seems everywhere he goes, Jake manages to make enemies, including the town bully, Tyler (JD Banks), who doesn’t like the new interloper or his interest in young surfing prodigy, Kayla (Katie Garfield). Stuck in the beach town with no friends and no knowledge of surfing, Jake has nowhere to turn until Cody (Jason Castro), the local surf shop owner, reveals that Jake’s grandfather is a surf legend. Tired of feeling like an outcast, Jake asks Lou to teach him about surfing. Jake learns to face his fears, push through inhibitions and realizes that winning the respect of his new peers – and Katie’s heart – might mean facing the biggest challenge of his life.

“While The Perfect Summer beautifully uses surfing as a backdrop, this summer UP film is all about relationships,” says Barbara Fisher, SVP, Original Programming, GMC TV. “This film is about hope. It’s a film about choices. We can all identify with struggles of fitting in and falling in love, even if you don’t live next to a beach and surf.”

The movie features big-wave local surfers and stars non-surfers, including Jason Castro, who grew up in Dallas skateboarding and dreaming about the surf culture in California. “The Perfect Summer” soundtrack will feature original music by Castro.

Eric Roberts (Lou) is an Academy Award nominee and a Golden Globe nominee who got his start originating the role of Ted Bancroft on “Another World.” He earned a ‘best actor’ Golden Globe nomination his role in “King of the Gypsies.” He was nominated for both a Golden Globe and an Academy Award for his supporting role in “Runaway Train.” His television work includes three seasons on the comedy “Less than Perfect” and on the hit NBC series “Heroes.” His sisters Julia Roberts and Lisa Roberts Gillan, and his daughter Emma Roberts are also actors.

undergraduate college. While a sophomore at Texas A&M University, Castro decided to take a break from performing and focus on his landscape-architecture studies. He continued to work on his vocal and guitar skills in his free time, and, realizing how much he missed music, decided to pursue a career as a professional musician. Castro tried out for “American Idol” and quickly became one of the most popular season 7 contestants. Following his fourth-place finish on the show, Jason toured the country. He released a self-titled debut album in 2010.

Adam Horner (Jake) was born in England. He moved to Australia at age 11. He currently lives and works in Los Angeles. In 2011, he auditioned for the hit television series “The Glee Project” and out of 43,000 applicants, he made it to the top 40. He was one of only a handful of international contestants to make the top 100.

About “UP” Uplifting Entertainment:

UP is the television entertainment brand promising to always uplift you. UP offers original movies, dramatic and reality series, comedies and specials filled with uplifting stories and characters with character. This is why we are one of the most trusted Networks in Cable and #1 Most Talked About ad-supported cable network on Facebook. UP is projected to be in 70 million homes by the end of 2014.  We can be found on most cable systems around the country as well as DirecTV channel 338, DISH Network channel 188 and Verizon FIOS channel 224. UP also provides gMovies, the first faith-friendly streaming entertainment service. The UPtv brand is reflected in “Uplift Someone,” the network’s successful pro-social initiative.   Read what others are saying about UP here!

You Will Hear of Wars & Rumors Of Wars - TigerStrypes Blog

[…] also been a great actor in every movie I’ve seen him in.  I recently saw him in “The Perfect Summer” DVD review that I got to do, and it was a whole other side of him.  Love how he makes you […]

Sounds like a great movie. I bet my son would enjoy it.

This looks like a great summer movie! I am sure my family would enjoy watching this.

This looks like a great family movie for the summer! & I especially love that Eric Roberts is in the cast.