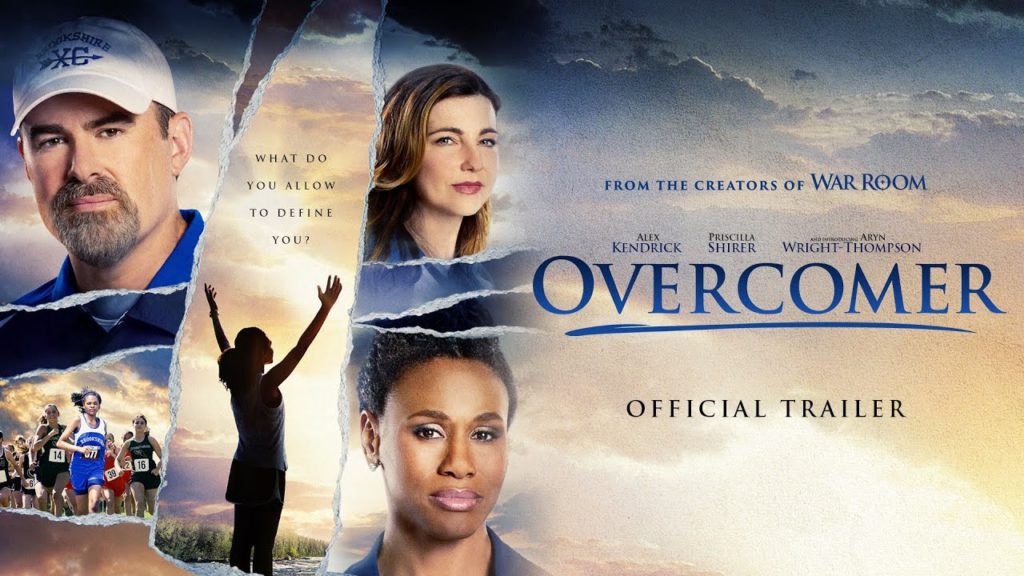 Find Your True Identity – Overcomer (DVD Review)
#OvercomerMovie #FlyBy
Have you heard about the movie that came out on digital November 26th called Overcomer? I had seen the previews on television and online, and was interested just due to the fact that it was from the same team as Fireproof, Courageous and many other great titles.

This one I was sure would have that same great family content, life lessons and things that make you think. I was right – the story is absolutely amazing!! You start watching and kind of wonder what’s going to happen, but at the end, the whole story wraps back to itself and completes the picture.

It was wonderful!! Overcomer is the #1 Inspirational Family Film of 2019, got a 98% audience score on Rotten Tomatoes. It’s now available just in time for gifting, too! The DVD is packed with tons of features and extras! Your family will for sure love it.

Is there anything in your life, that you had to be an Overcomer for? We all have trials, some more than others, I’m sure. Learning to get past them, and even help others in their walk is a great gift. Read more about the movie below, and let me know in the comments what you have had to overcome, and something you would tell others to help them. 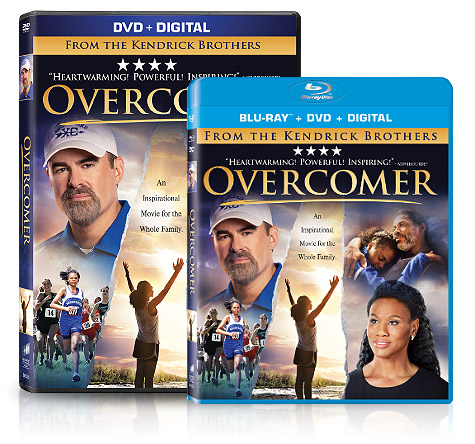 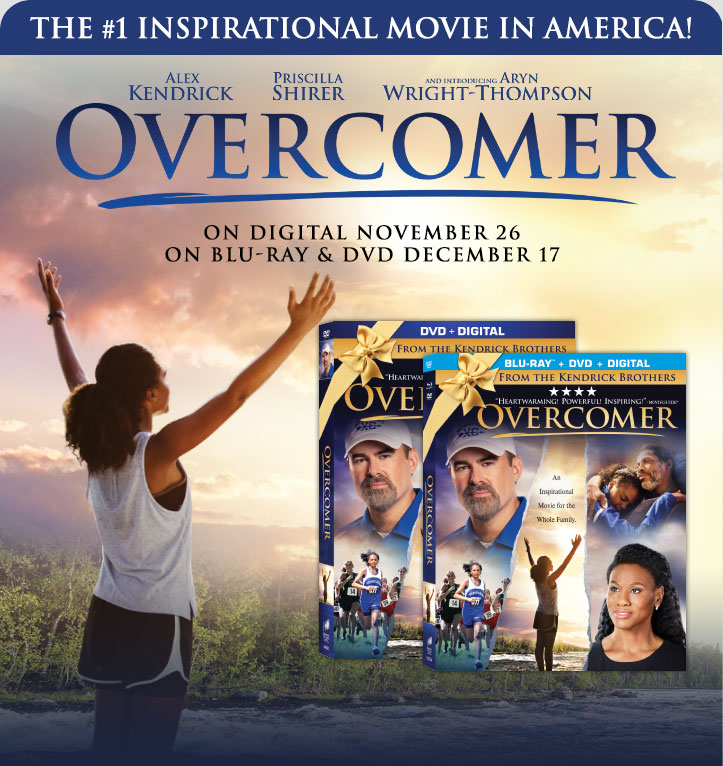 “Will Have You Cheering…” — The Dove Foundation
“A powerful, family friendly film!” – Christian Film Review

About the Overcomer Movie (ON DIGITAL NOVEMBER 26 – COMING TO BLU-RAY™ AND DVD DECEMBER 17):

Life changes overnight for coach John Harrison when his high school basketball team’s state championship dreams are crushed under the weight of unexpected news. When the largest manufacturing plant in town suddenly shuts down and hundreds of families begin moving away, John must come to grips with the challenges facing his family and his team. Urged by the school’s principal to fill-in and coach a sport he doesn’t know or like, John is frustrated and questioning his worth… until he crosses paths with a student struggling with her own journey.

Filled with a powerful mix of faith, a twist of humor, and a ton of heart, the Kendrick Brothers return to theaters with OVERCOMER, their newest feature following FACING THE GIANTS, FIREPROOF, COURAGEOUS, and the #1 box-office hit, WAR ROOM. The inspiring family film stars Alex Kendrick, Priscilla Shirer, Shari Rigby, Cameron Arnett, and introduces Aryn Wright-Thompson.

Now playing in theaters, OVERCOMER dares to leave you filled with hope, inspired to dream, and asks the question: what do you allow to define you?

OVERCOMER is from the creators of the #1 box-office hit War Room. Life changes overnight for coach John Harrison (Kendrick) after he loses his basketball team and is challenged by the school’s principal, Olivia (Shirer), to coach a new sport he doesn’t know or like. As John questions his own worth, he dares to help the least likely runner take on the biggest race of the year. Filled with a powerful mix of faith, humor and heart, this inspirational story will have you on the edge of your seat.

Have you heard about the @overcomermovie? Great story and perfect for family movie night!! #overcomermovie #FlyBy Find out more at: Click To Tweet 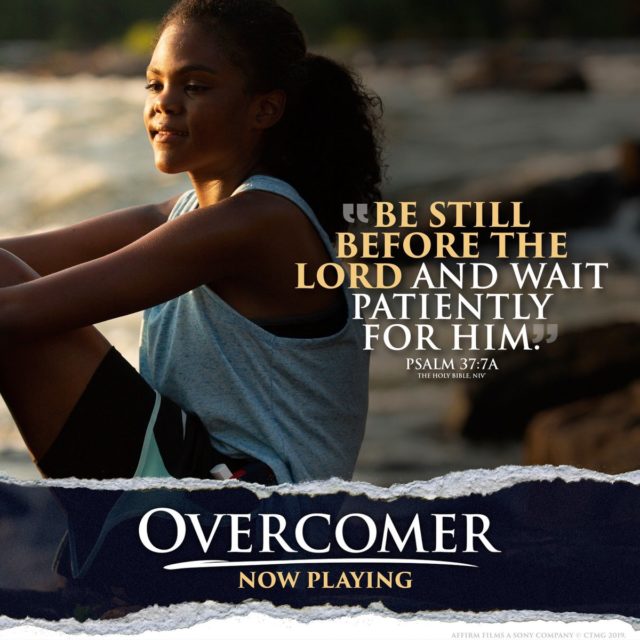 Get a Copy of Overcomer for Your Family:

AFFIRM Films produces, acquires and markets films that inspire, uplift and entertain audiences around the world. Since releasing its first theatrical film—The Kendrick Brothers’ drama FACING THE GIANTS, in 2007, AFFIRM Films has released numerous quality faith-based films including SOUL SURFER, WAR ROOM, OVERCOMER, RISEN, COURAGEOUS, FIREPROOF, WHEN THE GAME STANDS TALL, PAUL APOSTLE OF CHRIST, MOMS’ NIGHT OUT and ALL SAINTS. Additionally, AFFIRM Films partnered with Columbia Pictures on the release of HEAVEN IS FOR REAL and MIRACLES FROM HEAVEN, and THE STAR with Sony Pictures Animation. AFFIRM Films is a division of Sony Pictures Worldwide Acquisitions (SPWA), a Sony Pictures Entertainment Inc. (SPE) company. AFFIRMFilms.com

Provident Films develops, produces, and markets movies that inspire viewers to receive God’s truth and love. The company is part of the Nashville-based Provident Music Group, a division of Sony Music Entertainment. Provident Films has been a pioneer in faith-based films since 2006, and has a history of industry-leading partnerships including Sherwood Pictures/Kendrick Brothers (OVERCOMER, WAR ROOM, COURAGEOUS, FIREPROOF, and FACING THE GIANTS), The Erwin Brothers (WOODLAWN, MOMS’ NIGHT OUT, and the $83 million box office hit I CAN ONLY IMAGINE), Kirk Cameron (CONNECT), and Graceworks Pictures (INDIVISIBLE). For more information, go to ProvidentFilms.org.

Kendrick Brothers Productions is the company of brothers Alex, Stephen and Shannon Kendrick that exists to honor God and share the truth and love of Jesus Christ through movies, books, curriculum and speaking. By blending engaging stories with doctrinal integrity, the Kendrick’s seek to encourage and inspire audiences with resources that positively impact their lives and strengthen their faith, families, and personal relationships.

i have not heard of this movie but it looks very inspirational.

Grace, it has such a great story. At the end, you are looking at each other like “WOW!”

This looks like a good one to watch with my family over the holiday break. You always find the best family friendly movies!

The movie is amazing. Great story and really makes you think! 🙂