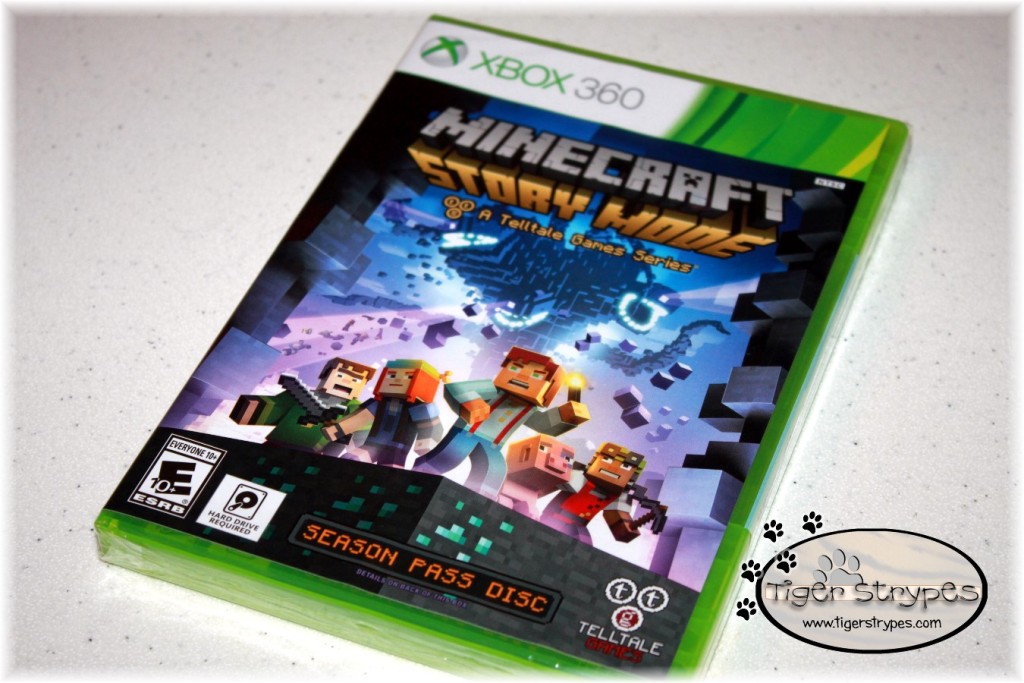 I got an email about the new Minecraft: Story Mode game coming out and was able to get a copy early for my son to try out. Let me start out to tell you, that my son DJ is a Minecraft fanatic. He’ll sit with us at the dinner table telling us about the mods, the bricks and all of the other things, including the “Nether”. If you’re like me, you pretty much blank out and have no clue what they’re talking about. My husband, on the other hand, has played with him, and can go along with the conversation of the game. Doing some research, I’ve found out that the Minecraft game, as a whole, has great learning benefits. Teaching kids how to build, and design things. I figured it was just a time waster, but it really can be of help to their learning ability. My son is so devoted to this game, that he spent hours during Halloween last year, making this costume from cardboard boxes, and duct tape! 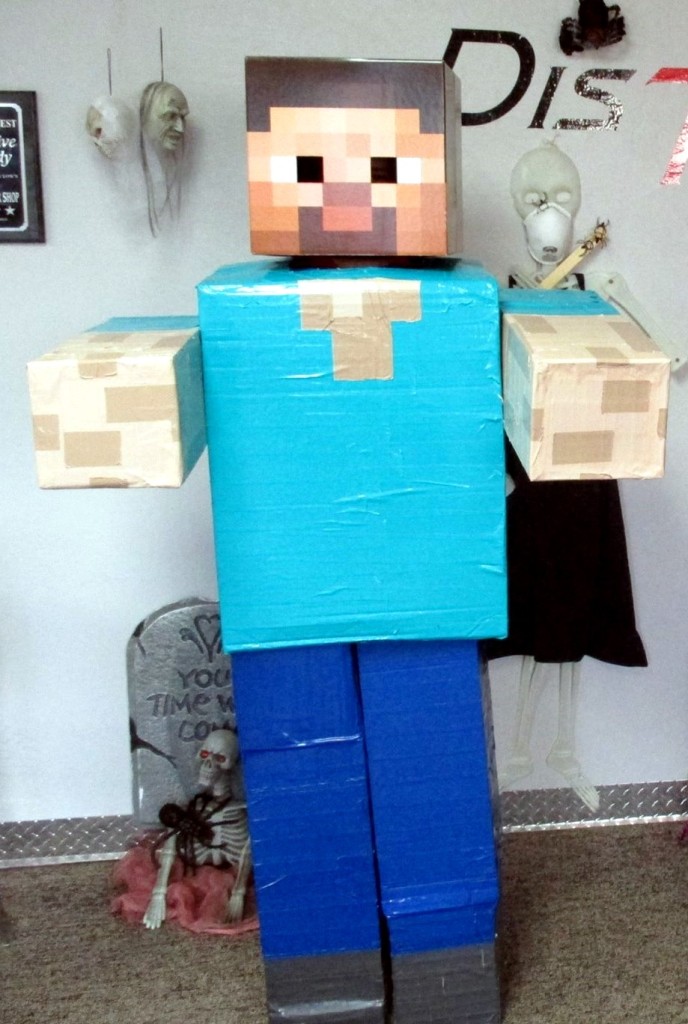 Now that I found out about the new Minecraft: Story Mode game, I thought that he might enjoy that, too. I received the package and told him that he was getting an early birthday present (since his birthday is in December). He opened the package and had that look of unbelief on his face. 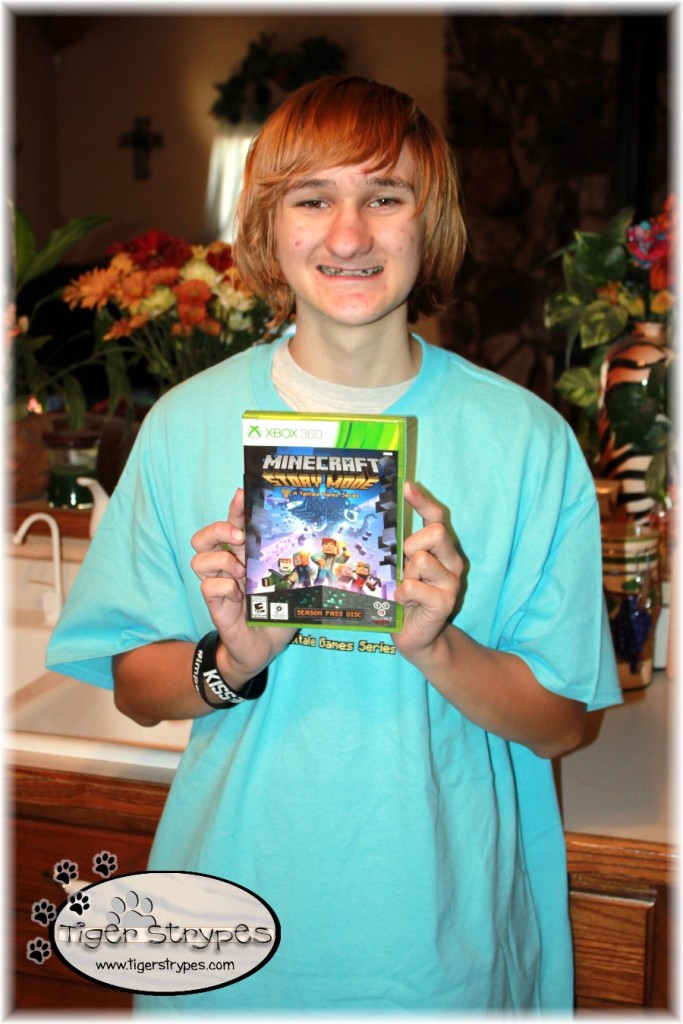 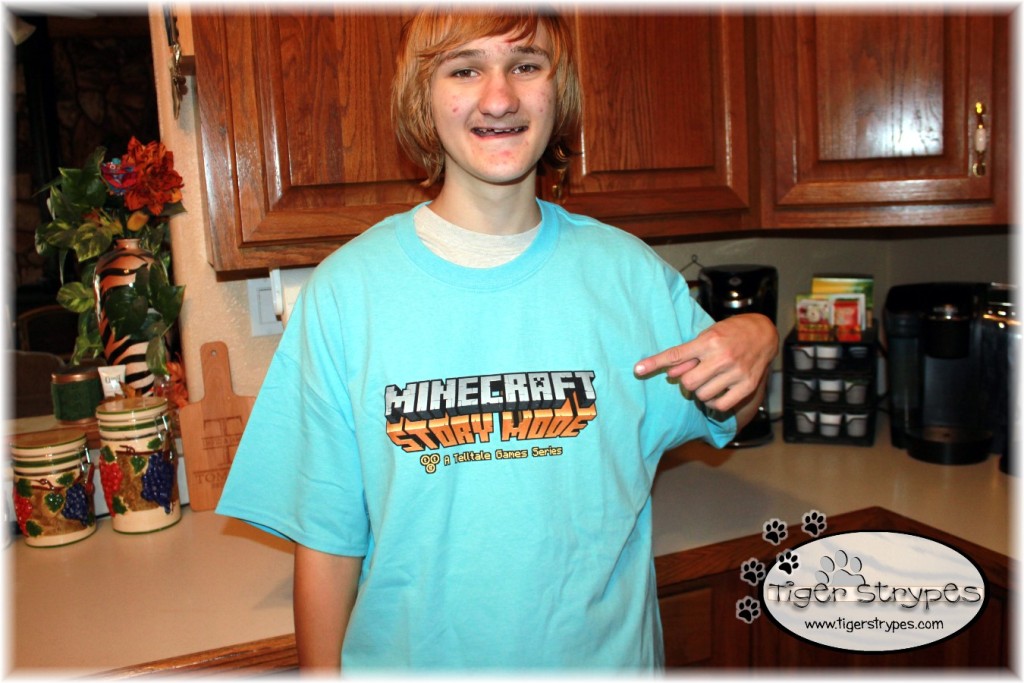 He told me that he had heard about the game coming out, and couldn’t wait to try it, but didn’t know when we would be able to find it in our stores. Well…surprise!! He couldn’t wait to start playing! 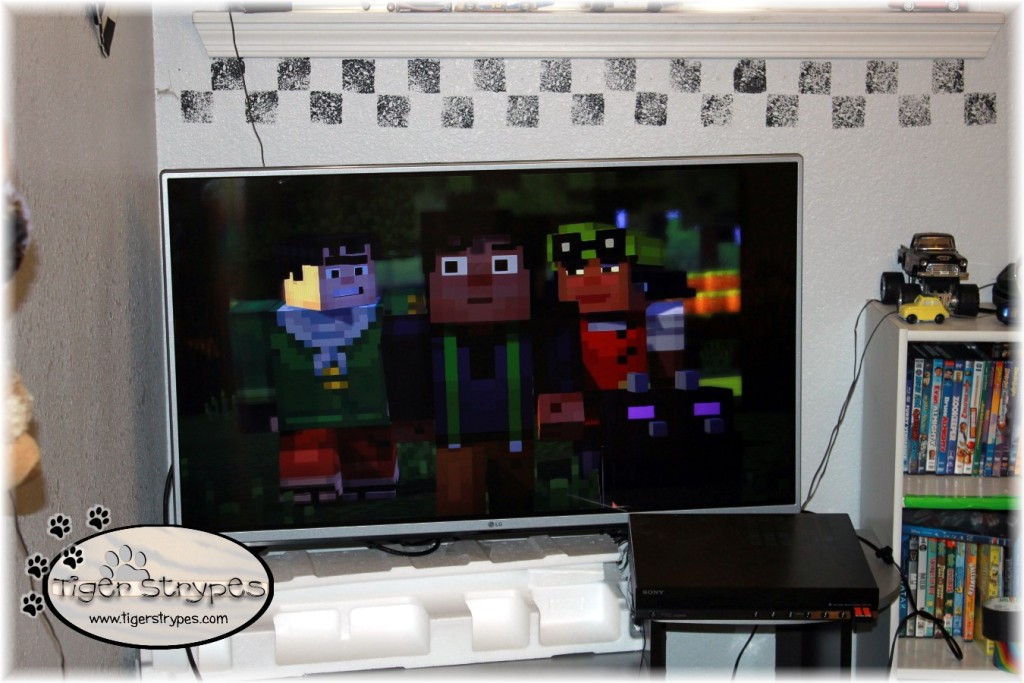 I asked him in the evening how he liked it, and he said it was great!! He said that sometimes he got tired of just building, and wanted to play and with this game, he could. He said it would be perfect for kids who didn’t really know how to create or edit mods, and just wanted more of a video game style.  Here’s his exact feelings:

“”Minecraft Story Mode” is a good game, because it has many different aspects. I like “Minecraft Story Mode” most because of it’s animation, and how you get to choose the story path. I also like how sometimes you can walk around and open chests, yet it still has the animations put into opening and building things. I first heard about this game on YouTube, and was interested in buying it.  Then my Mom surprised me with it. I would recommend this game to a friend.”

So between the PC version of the old game, and the XBox 360 one of this, he’s been entertained for some time. This is a perfect gift idea for Christmas for kids that love this story and would like to play it in a new way!! My son definitely recommends it! 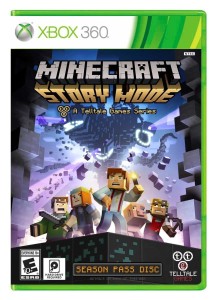 Minecraft: Story Mode is like a playable television show based on your favorite game, where YOU are the star, and your choices and actions decide how the story is told.

You are Jesse, and you and your friends are thrown into an awe-inspiring adventure to save the world. While visiting EnderCon, your gang stumbles on something dreadful. Terror is unleashed, and your only hope is to track down the “Order of the Stone”, a fabled group of adventurers who slew the legendary Ender Dragon. But where are they? In a race against time, you will travel across the over-world, through the Nether, to The End, and beyond.

YOU ARE THE HERO

You’ll begin Minecraft: Story Mode by playing Episode One – “The Order of the Stone”. As the hero, Jesse, you will make decisions on what to say, and what to do. Choose wisely, because every choice has a consequence!

CRAFT YOUR OWN STORY

If you’ve played Telltale’s recent games, you’ll have a good idea of the choice-based gameplay you’ll enjoy in Minecraft: Story Mode. If you’re new to Telltale and our games, the story you experience is driven by the choices that YOU make. You’ll make decisions about what to say (or not to say) in dialog with other characters, and this, along with physical choices in moments of action, will alter the flow of the story, meaning that the game you experience could be very different from someone else’s. 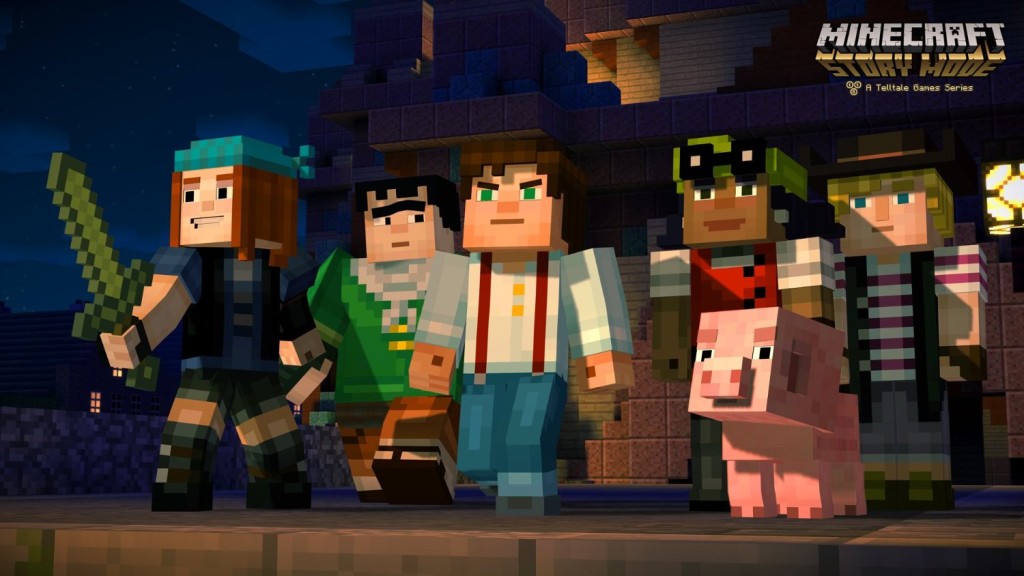 The game’s first episode was released earlier this month digitally, and is now available at retail stores! The five part episodic series sets you in the world of Minecraft, but introduces new characters and familiar themes, building an entirely original Minecraft experience inspired by the game. You drive the story through the decisions you make: what you say to people (and how you say it), and what you choose to do in moments of thrilling action will make this YOUR story! 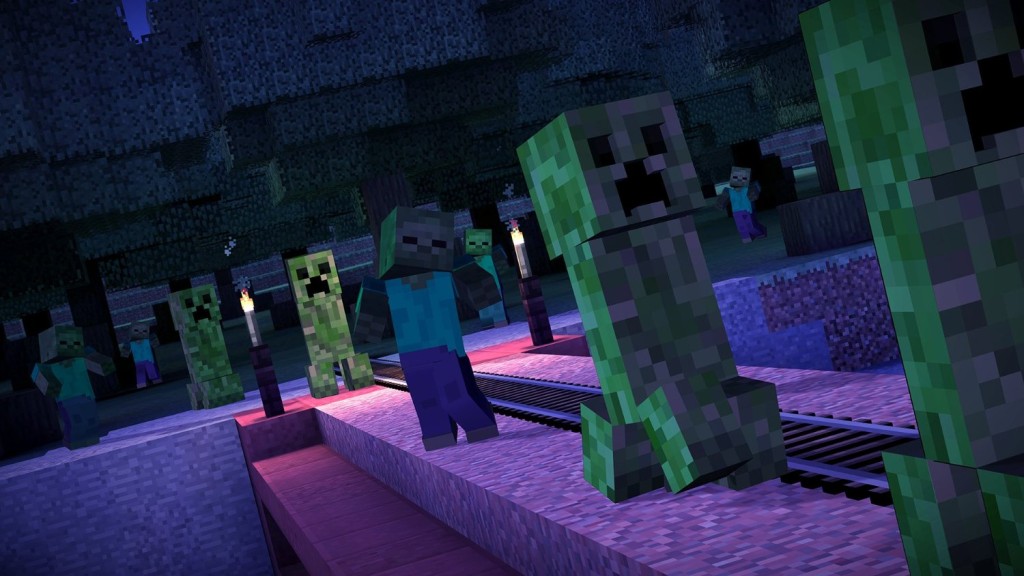 Minecraft: Story Mode – A Telltale Games Series – Episode 1: ‘The Order of the Stone’ is rated ‘E10+’ (Everyone 10+) for Fantasy Violence and Mild Language by the ESRB. Future content in the season is yet to be rated by the ESRB. The series is published by Telltale Games in partnership with Mojang.

Get a Copy for Your Family:
(Other Platforms Available)

I guess this would be a must-have for those Minecraft lovers on your Christmas list. He looks so happy playing that game, bet it got a lot of play over the Thanksgiving holliday. Thanks for sharing and co-hosting at the #HomeMattersParty – we appreciate you! 🙂

It’s definitely a great one for the ones who love the “blocks”. 🙂

Oh, I bet my little guy would love this. He too is a Minecraft fanatic – in fact I think he’s playing it right now. Add it to the Christmas list! 😉

Happy to be co-hosting with you again this week. #HomeMattersParty Happy Thanksgiving!

It’s definitely one my son loves! 🙂

That’s so cool you were able to get him one already! My son knows about Minecraft but hasn’t played it. He has shown interest in it so it may be a game I think he’ll play when he is a little older. I didn’t know exactly what it was at first either and I still don’t know much but looks like something that would really engage kids and help out their skills!

Be ready if he starts to play it, he won’t want to stop. :p

Oh my, wait until my sons find out about this! They are major Minecraft fans, too! I at first didn’t understand the attraction, but it’s one of the better games that makes them think and test their logic skills, so that’s a-okay with this mom, too!

I just wish it would make them go outside once in awhile. :p

My son has talked a lot about MineCraft. He even checked a book out from the library about it, but he has never played it. He just heard about it from friends. This game would be a good gift for him.

Oh goodness, don’t let him talk to my son, then – he’ll have him hooked! :p

My boys love minecraft. They love the building part.

It’s a great game to teach some skills.