For this week’s “Things That Bring Back Memories” post, I am going to pick something in the topic of “Movies” and go with the original Look Who’s Talking.  This was a movie from 1989, and back then, was one that made us all laugh and still believe in caring people.  Who could have been more popular than John Travolta and Kirstie Alley?  Another plus, was Bruce Willis as the baby voice – that was iconic.  You never really even thought about it watching the movie, since it worked so well with the little kiddo and sucked you right in to believing that they were his thoughts! 🙂

For those of you, who are either too young, or just don’t remember it, here’s the preview of the Look Who’s Talking movie:

Do you remember the Look Who's Talking movie with #JohnTravolta & @kirstiealley? Find out more at #TigerStrypesBlog Click To Tweet 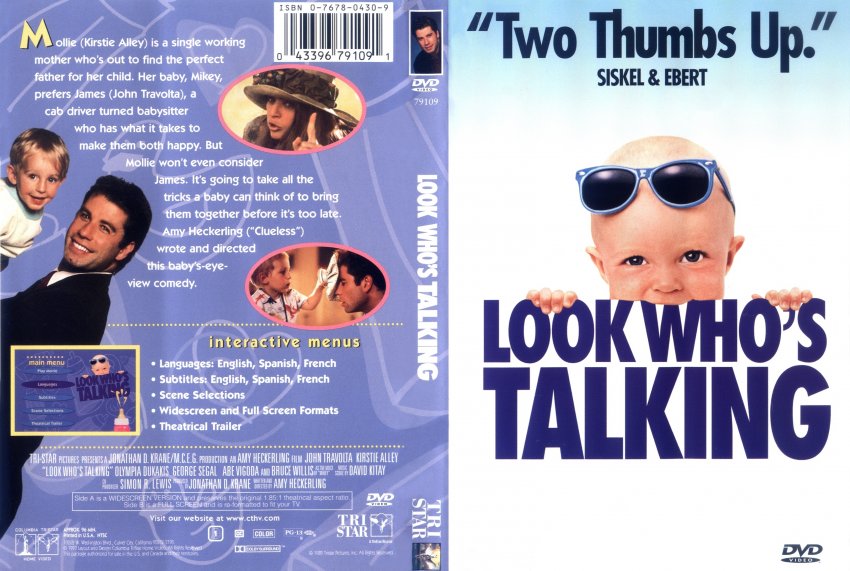 Mollie is an accountant living in New York City who has an affair with Albert, a womanizing executive who is married with two children, and becomes pregnant. During her pregnancy, Mollie and Albert keep their indiscretion secret, under the idea she was artificially inseminated, and that Albert plans to leave his wife Beth and their two children to be with her. Mollie and her friend Rona happen to catch Albert fooling around with his interior decorator Melissa and he admits he is planning on living with her after his divorce is finalized. Mollie leaves upset, and immediately goes into labor. She gets into a cab where the driver, James Ubriacco, recklessly speeds through downtown traffic in order to get her to the hospital on time, and he is inadvertently a witness to her son Mikey’s birth. Mikey then begins to make commentary on his life and interacts with things through an inner voice which can also communicate with other babies.

Hoping to get her life back on track, Mollie becomes a dedicated single mother; refusing to be superficial about hopeful fathers, but rejecting several men over small quirks that may reflect badly upon Mikey in the future. She meets James again at her apartment building and discovers he used her mailing address to set up residency in order to get his grandfather Vincent into a nice care home. She agrees to continue the ruse when he agrees to babysit Mikey, which almost comes to a halt when he takes the baby out to the airport, where he is a part-time commercial pilot while she is taking a nap (leading her to believe he’d kidnapped Mikey). A year passes, and James, realizing his feelings for Mollie cause him to start sabotaging one of her dates, she soon realizes the bond he and Mikey share and decides to give him a chance. After a visit to James’ grandfather at his new home, James takes her for flying lessons and she realizes she’s falling for him, but when they become intimate, she imagines their life together and resists. James tells Mollie that he loves her, but she says she only wants what is best for Mikey and kicks him out. Back at work, Mollie is forced by her boss to continue to work with Albert, who insists upon seeing Mikey and she agrees. But when Albert visits, he meets James and the two get into an argument, the secret upsetting James he asks Mollie if she loves Albert and she claims she does not know. When he suggests the idea of being the closest thing to a father Mikey has, Mollie tells him that he’s like a big kid and is not responsible enough to be a father. James calls her out for using Mikey to push men away including himself and he storms out. At the playground, Mikey is told by his friends what “daddies” are, and he realizes he wants James to be his daddy. James comes to the apartment and tells Mikey that he won’t be around any more, and Mollie listens over the baby monitor as he pours his heart out to Mikey who admits he will miss James too.

Mollie takes Mikey to Albert’s office to meet him, but when Albert claims he doesn’t want the responsibility of being a father, Mollie realizes he hasn’t changed and she and Mikey ruin several pieces of his furniture before storming out and putting Albert out of their lives for good. Back at home, she receives a call from Vincent’s home telling her that he’s a disruptive influence and abusive to the staff, and she rushes over to clear up the error, managing to convince them to keep Vincent as he was given a chocolate stash that James had earlier instructed an orderly (who didn’t speak English) not to let him have more than one a day or it would cause these outbursts. James arrives and he and Mollie make up. Meanwhile, Mikey wanders off on his own, searching for James when he sees a taxi cab outside. After making his way out to the alley he gets into a car and is towed away while Mollie and James search frantically for him. After spotting him, James and Mollie give chase in his cab and eventually cut off the tow truck, but discover Mikey had gotten out of the car and is now standing in the middle of heavy traffic. James and Mollie run to reach him and take him to safety, where Mikey unofficially asks James to be his father by saying his first word “Da-da”. James and Mollie realize that Mikey already sees James as his father, and they decide to give it a chance, kissing passionately while Mikey considers telling him he needs a new diaper, before deciding to wait.

Nine months later, Mollie gives birth to her and James’ daughter Julie. When Mikey greets his half-sister she “tells” him she had a day he wouldn’t believe.

John Joseph Travolta was born February 18, 1954, and is an American actor, film producer, dancer, and singer. Travolta first became known in the 1970’s, after appearing on the television series Welcome Back, Kotter (1975–1979) and starring in the box office successes Saturday Night Fever (1977) and Grease (1978). His acting career declined through the 1980’s, but enjoyed a resurgence in the 1990s with his role in Pulp Fiction (1994), and he has since starred in films such as Face/Off (1997), Swordfish (2001), Wild Hogs, and Hairspray (both 2007).  Travolta was nominated for the Academy Award for Best Actor for performances in Saturday Night Fever and Pulp Fiction. He won his only Golden Globe Award for Best Actor in a Motion Picture – Musical or Comedy for his performance in Get Shorty and has received a total of six nominations, the most recent being in 2008. In 2014, he received the IIFA Award for Outstanding Achievement in International Cinema. In 2016, Travolta received his first Primetime Emmy Award as a producer of the first season of the anthology series American Crime Story, subtitled The People v. O. J. Simpson, also receiving an additional Emmy nomination and a Golden Globe nomination for his portrayal of lawyer Robert Shapiro in the series.

Kirstie Louise Alley was born January 12, 1951, and is an American actress, comedian and spokesmodel. Her big break came in 1982 playing Lieutenant JG Saavik in the science fiction film Star Trek II: The Wrath of Khan.  Alley is best known for her role as Rebecca Howe in the NBC sitcom Cheers, in which she starred from 1987 to 1993, winning the Primetime Emmy Award for Outstanding Lead Actress in a Comedy Series and Golden Globe Award for Best Actress – Television Series Musical or Comedy in 1991. She has also starred in several movies, including Summer School (1987), Shoot to Kill (1988), Look Who’s Talking (1989) and its two sequels, Sibling Rivalry (1990), It Takes Two (1995), Deconstructing Harry (1997), and Drop-Dead Gorgeous (1999). She received her second Emmy for David’s Mother for Outstanding Lead Actress in a Limited Series or Movie.  From 1997 to 2000, Alley starred as the leading character in the NBC sitcom Veronica’s Closet, for which she received additional Emmy and Golden Globe Award nominations. In the 2000’s, she has appeared in reality shows revolving around her life. In 2013, she returned to acting with the title role on the short-lived TV Land sitcom Kirstie, and in 2016 joined the second season of the Fox horror-comedy Scream Queens, playing Ingrid Hoffel.

Look Who’s Talking – Did You Know? 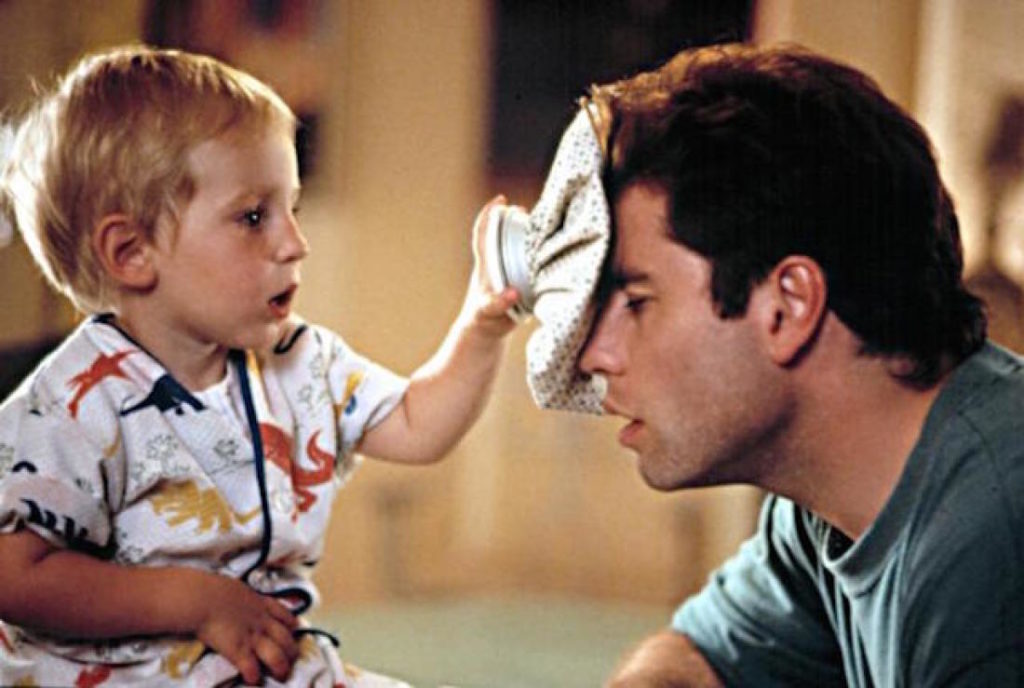 Thanks for stopping by today.  Please be sure to leave a comment, if this show meant something to you, too.  Or to just let me know what you think of the story in this post!   TigerStrypes claims NO credit for any images used on this post, unless otherwise noted.  Images in this post are copyright to their respectful owners. If there is an image appearing on this blog that belongs to you and do not wish for it appear on this site, please email us with a link to said image and it will be promptly removed.  Thanks and have a great day!!

That was such a cute movie!

I agree, Denise. Thanks for stopping by.

Oh my goodness I remember this movie! Kirstoe Alley and John Travolta were so good together

I thought so, too. I’m not sure if I would feel the same today, though. 🙂

I loved this movie!! I’m kind of glad Robin Williams wasn’t the voice. While I love Robin Williams, I don’t know that I would like his voice in this!

It might have been a bit weird that way, huh? I think they chose a great one!

This was such a fun movie. I loved their chemistry together too. Great memory!

For sure – it’s one that made us laugh!

I remember this movie!! I was like 5 when it came out and my mom tried to explain the opening scene with the sperms and I was SO confused LOL!!

I love it! Oh, the days when we were so innocent. 🙂

This was the cutest movie! I need to watch it again now that I’m older.

It’s funny how we can see them so differently later in life.

I watched this a couple of times when I was younger. Not a movie that’s stuck with me really if I’m honest. I think I was a bit too young to start with, then when I got round to watching it years later I didn’t have any nostalgia linked to it and was just a bit too old. #TwinklyTuesday

That’s why, thankfully, there are different movies for different people. 🙂 Thank you for stopping by.