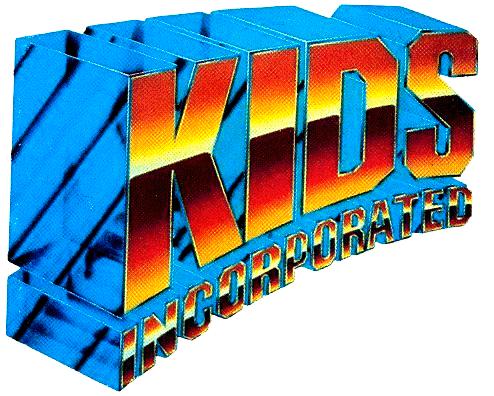 For this week’s “Things That Bring Back Memories” post, I am going to pick something in the topic of “TELEVISION” and go with Kid’s Incorporated.  This was a show that had a lot of singing and dancing – it also produced a lot of the stars that are still around today.

Being that it was back in the 80’s, there were so many kids that were happy that there was finally a show for them.  Most parents just thought it was weird, but being a child and seeing all of the kids have a great time together was really fun!

For those of you, who are either too young, or just don’t remember it, here’s a video of the Kid’s Incorporated intro: 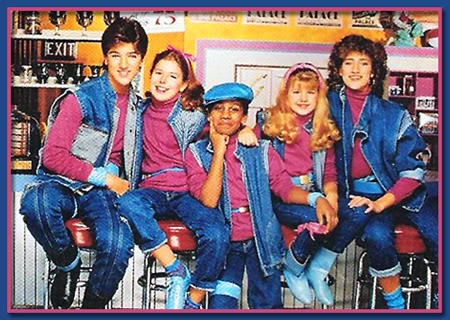 Kids Incorporated, also known as Kids Inc., was an American children’s television program. It was largely a youth-oriented program with musical performances as an integral part of each and every storyline. The pilot episode was shot on September 1, 1983. The show aired in syndication from September 1, 1984 to May 25, 1986, and on The Disney Channel from November 3, 1986 to February 9, 1994. Reruns aired on The Disney Channel until May 30, 1996.

The series revolves around a group of children and teenagers who performed in their own rock group, Kids Incorporated. They struggled to deal with issues ranging from schoolyard crushes to peer pressure to child abuse, while performing regularly at a local former musical club (now a kids’ hangout) called The P*lace (called “The Malt Shop” in the pilot on September 7, 1983). It had originally been named The Palace and had been a theater where, supposedly, the biggest names in entertainment, such as Elvis Presley and Frank Sinatra, had once performed. But the first “a” in the neon sign burned out and was never replaced. It was never explained how the group funded or profited from their performances, but the show did not aim for strict realism. The action took place on abstract “strategy” sets and the plots involved many fantasy elements, such as the group meeting a robot (Season 1, Episode 10), a runaway princess (Season 1, Episode 6) and even a wise-cracking bicycle (Season 1, Episode 17). In addition to their performances on stage, the group would break into song when they were off-stage (much like in a stage musical). The city in which the Place was located was never disclosed. The school depicted on the set had signage reading P.S., and later, Public School 127. In one episode in the first (Season 1, Episode 20 (1984)) season, The P*lace was expected to be torn down, but was saved as a National Historical Landmark.

The cast was mainly children and teenagers. The only recurring adult co-host members of it were Michael Lewis (“Mike”, pilot episode only), Moosie Drier (Riley, 1984–1989), Sean O’Riordan (Flip, 1989–1992) and Dena Burton (Dena, 1993-1994), who played staff of The P*lace. Michael Lewis played the manager of “The Malt Shop” (the predecessor to “The Place”) in the pilot. Parents rarely either appeared on the show or figured directly into episode plots. The only main times parents and grandparents appeared and had long speaking roles, were in several episodes. 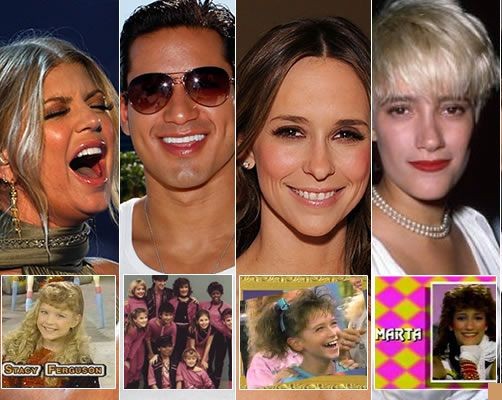 Stacy “Fergie” Ferguson (Stacy) was born March 27, 1975, and is an American singer, songwriter, fashion designer, television host, and actress. She is the female vocalist for the hip hop group The Black Eyed Peas, with whom she has achieved chart success worldwide. Her debut solo album, The Dutchess (2006), spawned five Billboard Hot 100 top five singles, three of which went to number one.  Ferguson was a member of the children’s television series Kids Incorporated and the girl group Wild Orchid. In 2001, she left the group and in the subsequent year began to team up with The Black Eyed Peas. With The Black Eyed Peas, she enjoyed a series of hits and albums before she released her solo debut album in September 2006 to success. The Black Eyed Peas enjoyed further success with the release of their third album with Ferguson, The E.N.D. (2009); they attained their first string of Billboard Hot 100 number one songs. She began touring in 2009/2010 with her group and she launched her debut fragrance, Outspoken, under Avon in May 2010 and has since released three more fragrances.  She continued success with The Black Eyed Peas and they released the album The Beginning (2010), which featured three singles, including two number one songs. As Ferguson’s five solo singles and six singles with The Black Eyed Peas have reached two million downloads in the United States, Ferguson was the artist with the most two-million sellers by the beginning of 2011.

Mario Lopez (the Drummer) was born born October 10, 1973, and is an American television host and actor. Lopez has appeared on several television series, in films, and on Broadway. He is best known for his portrayal of A.C. Slater on Saved by the Bell, whom he also portrayed as a regular on Saved by the Bell: The College Years. He has appeared in numerous projects since, including the third season of Dancing with the Stars and as host for the syndicated entertainment news magazine show Extra. He has also hosted America’s Best Dance Crew for MTV. In 2012, he co-hosted the second season of American version of The X Factor with Khloé Kardashian, and was the sole host for the third season.

Jennifer Love Hewitt (Robin) was born February 21, 1979, and is an American actress, producer, author, television director and singer-songwriter. Hewitt began her acting career as a child by appearing in television commercials and the Disney Channel series Kids Incorporated. She rose to fame in teenage popular culture in her roles in the Fox series Party of Five (1995–2000) as Sarah Reeves Merrin, and films I Know What You Did Last Summer (1997) and its 1998 sequel as Julie James.  Hewitt starred on the hit CBS television program Ghost Whisperer (2005–10) as Melinda Gordon, for which she won a Saturn Award in 2007 and 2008 for Best Actress on Television.  She then starred in the Lifetime television series, The Client List (2012–13) as Riley Parks, and was previously nominated for a Golden Globe Award for the pilot movie. In addition to acting, she has served as a producer on some of her film and television projects.  As a singer, Hewitt has been signed by Atlantic Records and Jive Records, and is primarily known for her recordings in the pop genre. Her most successful single on the Billboard Hot 100 is the 1999 release “How Do I Deal”, which peaked at No. 59.  She has also contributed music to the promotion or soundtracks of acting projects.  Hewitt was identified as the “#1 reader choice” on the November 1999 and May 2009 covers of Maxim.  TV Guide named her the sexiest woman on television in 2008.

Marta “Martika” Marrero (Marta) was born May 18, 1969 in Whittier, California, to Cuban parents from Havana, Cuba. She entered mainstream show business in an un-credited role as one of the orphan girls in the 1982 motion picture Annie. This led to her being cast as Gloria on the long-running kids show Kids Incorporated as one of a group of neighborhood kids who rise to local fame by singing staged productions at a corner malt shop. Martika and many fellow Kids Incorporated cast members were featured in the musical numbers from the Mr. T motivational video Be Somebody… or Be Somebody’s Fool! in 1984. Mr. T would call Martika ‘A-Train of fashion’ off camera.  Following her role in Kids Incorporated and Be Somebody, Martika was signed by Columbia Records. Her first solo release was released only in Japan: “We are Music” was recorded to promote Sony cassette tapes in the Japanese market, where the song was released in the 12″, 7″ and CD formats.  Her first album, 1988’s Martika spawned the song “Toy Soldiers”, which she co-wrote with her producer Michael Jay, and became a top 5 hit in the United Kingdom, Ireland, Germany, and Australia.  In the US, “Toy Soldiers” spent two weeks at #1 in 1989 and was certified Gold by the RIAA.  “Toy Soldiers” also went to #1 in New Zealand. 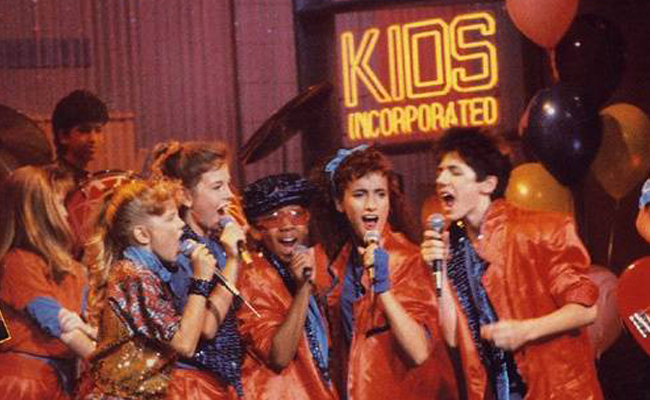 Following the filming of the 1989 season the show was put on hiatus for two years, with the series picking up again in 1991. Only two stars from the 1989 season – Jennifer Love Hewitt and Kenny Ford – returned to continue production (hence the sudden change in the cast list at this time).

In one of the episodes, Mario is on his school’s wrestling team. In real life, he wrestled for Chula Vista High School in the 160 pound division, placing second in the San Diego section, and seventh in the California state championships in 1991, his senior year.

At the end of one of the episodes, Kathy Johnson shows Stacy an Olympic gold medal. At the 1984 Olympics in Los Angeles, Kathy Johnson won a silver medal in the team competition and a bronze on the balance beam. 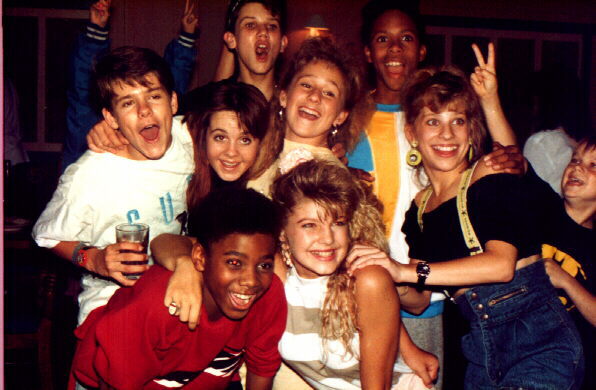 I dont remember this show. I think I would have loved it though.

I loved that show when I was growing up.I had forgotten all the people who were on it. Thanks for reminding me.

You’re welcome, Melissa – it’s fun to look back and see what happened to some of the stars from back in the day!