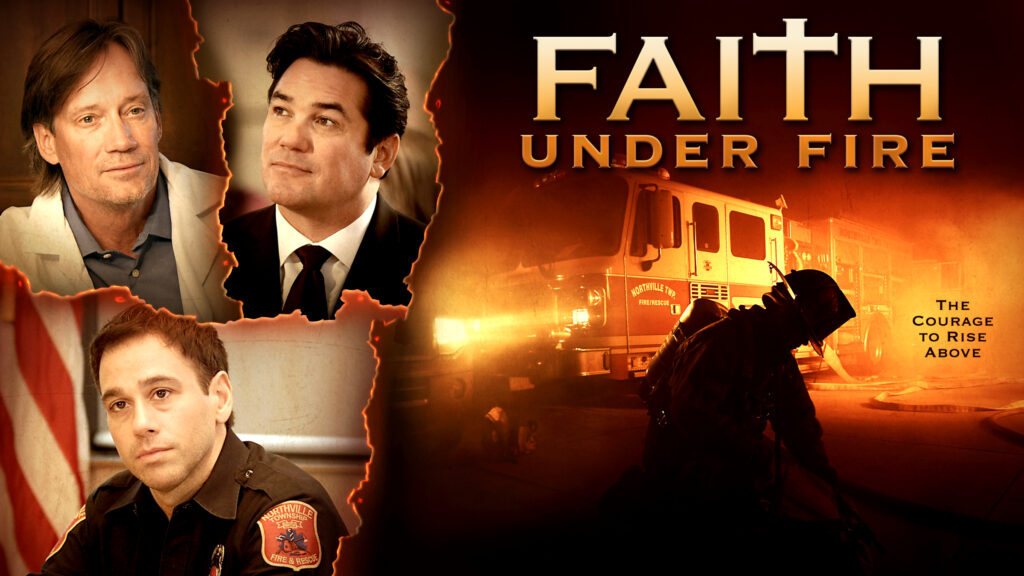 Is your Faith Under Fire? Check out this #FaithUnderFireMIN movie #review and enter the #giveaway to find out more about the movie with @ksorbs and @RealDeanCain. Click To Tweet

I heard about the Faith Under Fire movie from the Momentum Influencers. I had never heard of the movie, and didn’t see any previews of it coming out. Seeing that it had Kevin Sorbo in it, made me interested. All of the movies that I’ve seen with him in them, have been great ones. Plus, it had Dean Cain as the pastor…what could be better than that? Superman helping spread the Word of a SUPER MAN!! 🙂

The movie started out with what I believe was a look back on the main characters life. Then it went on to show the struggles that he had, and problems that he had to endure. Kind of losing his faith, and then gaining it back after a lot of hurdles. Seeing the part where he was asked to leave the church by the ushers, really hurt. I know that they did it out of their own opinion, and had no guidance from their leadership. So many times, that happens in the church world today. I know that most bible teaching pastors will not turn away someone due to past decisions, and mistakes. Us as the congregation need to learn from that. We need to forgive and know that God can make someone new. 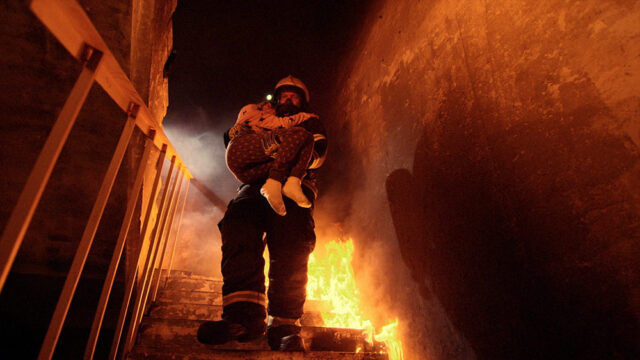 The whole story was a good one. I won’t tell you how it ended, but I was a bit disappointed in that part. The way it did, made me want a part 2, or to find out what happened after this. It’s like the shows you watch for months and then the network cancels them. What happened to so-and-so? Where did that guy end up? You know how it goes? I really wish it would have ended on a higher note with the happy ending that I was hoping for with a certain couple. Oh well, I guess I can just pretend it’s one of those books that has multiple endings and I’ll just dream up my own and have it end that way.

Being a drama film, it offers great hope while providing honest representations of the struggle to have faith amidst suffering. The movie does have some great stories, and really makes you think, and thank God for what we have now. No trial, no problem can separate us from His love and that’s what can keep us going in this world (as hard as it is) right now. Leave a comment about a time that your faith was under fire, and how you were able to work through it. You never know, the next person could be going through that same thing right now and need that advice.

About the Faith Under Fire Movie:

After an exhausting night saving a young girl from a raging house fire, Fireman Tom Hatcher is at the end of his rope. He couldn’t save his wife from cancer – and worse yet – his six year old daughter, Tiffany, is now facing the same possible fate. When he finds himself in a cold jail cell after attacking a pastor out of frustration with a seemingly absent God, Tom begins to reflect on his downward spiral into despair. But with the help and persistent friendship of the very man he assaulted, Tom is challenged to face his grief and embrace faith in the darkest hours of his life.

Get a family discussion guide about the movie HERE. 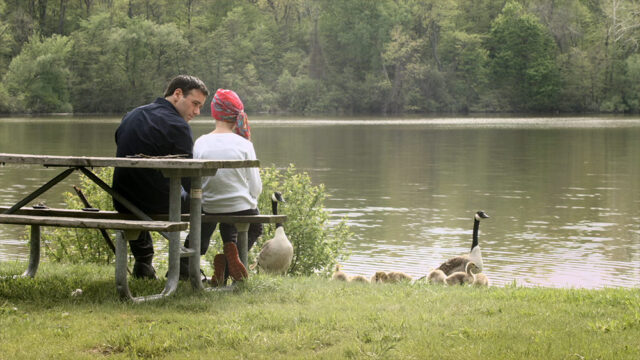 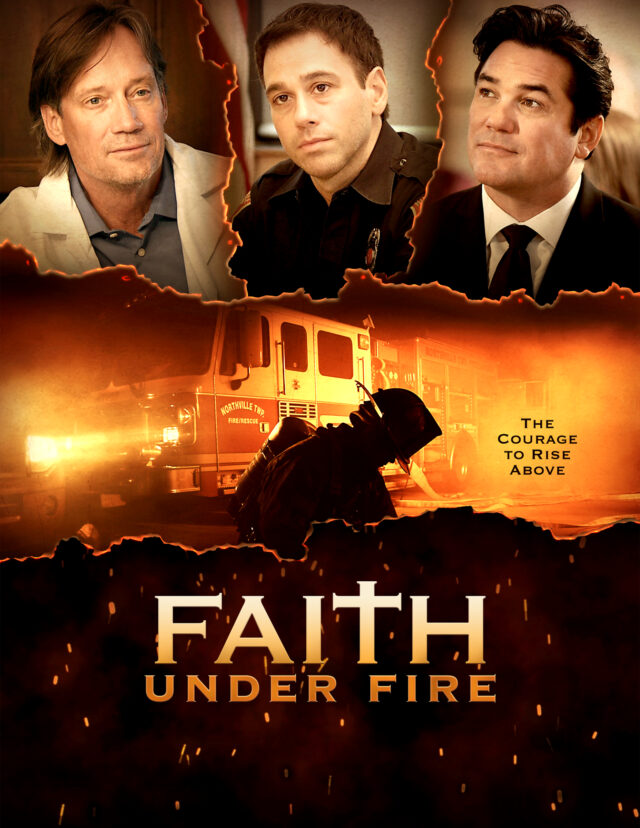 This movie offers a wonderful truth: faith will take you through the fire! Tom Hatcher is a fireman who has fought his share of fires. But none compares to the fires in his personal life that he will have to navigate. He loses his wife, Sara, to cancer, and then shortly afterwards learns that his daughter, Tiffany, has cancer too.

In an unforgettable scene, Tom enters the door of a church as Pastor Dan Underwood (strongly portrayed by Dean Cain) is greeting his congregation with an “It’s good to be in the house of the Lord!” Pastor Dan reveals he is beginning a series, and he opens up in Ecclesiastes 3:18. The series will be titled “There is a Season” and he plans to speak about the various topics in this chapter, including the passage that there is a time to be born and a time to die.

From the back of the church a hurting Tom challenges the pastor. “Where are these miracles?” he demands. “When will God come down and do these miracles? Where’s the Almighty to help the people? Where is the King?” Pastor Dan steps down from the platform and goes to the man. “He knows our pain and is acquainted with our grief,” he says. When the pastor begins to speak of faith Tom belts him and knocks him down! Fortunately, the story doesn’t end there. One of the pastor’s statements becomes a theme of the film: “Doubt is the yeast that spoils the whole loaf.” He and Tom meet again as Tom apologizes and Pastor Dan does his utmost to help Tom travel the path of pain and disappointment. As the pastor points out, God puts people in our lives that love us and help us along the way and our faith in God’s love is essential to maintain peace of mind.

One of the persons that God places in Tom’s life is a nurse, named Melissa, and Tom’s own daughter Tiffany believes that her mother would even be pleased if Tom were to marry her. Melissa is a warm person, compassionate, and patient. She knows Tom has been through a lot with the loss of his wife and the serious illness of his daughter. However, when Tom misses a dinner date with her and winds up instead at the bar, it soon becomes questionable whether he will get another chance. Tiffany’s health goes up and down, with good days when she is even able to return home from the hospital, to the not-so-good days when she winds up back at the hospital.

When Tom attends church with Tiffany, the ushers are not aware that Tom and Pastor Dan made peace, and they ask him to leave. It will take a lot of perseverance and convincing for Pastor Dan to get Tom to return to the church. Another person who is placed in Dan’s life is Tiffany’s doctor, Dr. Robinson, a Christian who is not ashamed to tell Tom he is praying for Tiffany. Kevin Sorbo gives a powerful performance as the doctor, especially when he has to sit Tom down to give him some difficult news.

The movie does a good job in laying out the painful moments of life, but also in offering hope through faith in God and the help of caring people. The actress billed simply as Tenley is terrific as Tiffany, giving a layered performance as a young, compassionate girl who is also wise beyond her years. Likewise, Nick Vlassopoulos gives a solid performance as Tom Hatcher. Although there are some depressing moments in the film, such as when we find out about Pastor Dan’s pain from the past, there are several shining moments when hope is offered for the warriors of God to march forward.

We are awarding this dramatic, faith-based film our Dove-approved seal for Ages 12+, while noting some children a bit younger may be mature enough to watch as well. Parents should consult our content listing and make their own informed decisions. 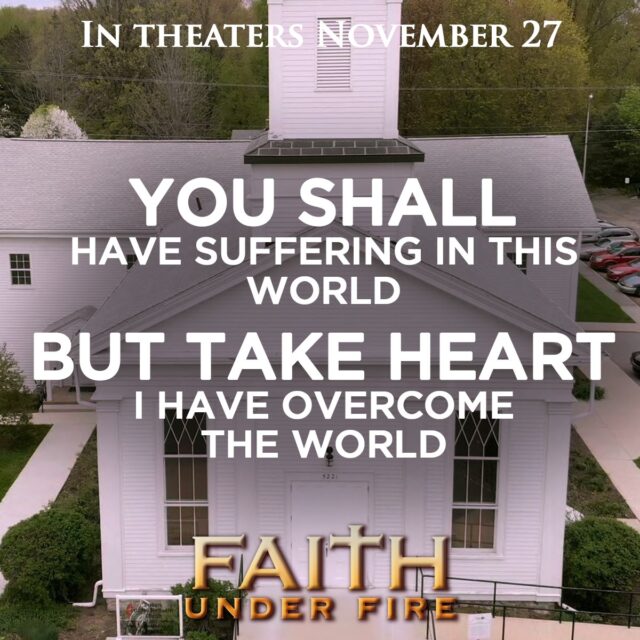 Enter to Win a Copy of Faith Under Fire:

Connect With Faith Under Fire:

Looks like a very powerful emotional movie. Looking forward to seeing it!

It’s powerful, for sure. Makes you think about life a bit. 🙂

This sounds like a film with lots of turns and raw emotions. I am sure it is a good film with the actors in it.

It was a great story. Makes you think about things in life that are most important.

This is on my wishlist to see. I need a good movie to watch with my husband since my oldest son promised to “babysit” our youngest in his room so that my husband and I could watch a movie for a date night. 🙂

Awwww….that’s adorable!!! Any time you can get a date night, take it!

Sounds terrific! I am always looking for inspiring films.

This one is kind of sad, so you have to be ready for that part.

I remember Dean Cain in the Superman show, so I know he is a great actor who brings a lot of heart to his roles. Is love to see this!

He definitely is a super man. I’m proud of him for not being in fear of his faith! 🙂