Faith of our Fathers – The Movie
#FaithofourFathers #FlyBy

I recently got a DVD called “Faith of our Fathers” from FlyByPromotions.  I had heard of this movie, when it was set to come out in theaters, but our local theater never played it.  I was so happy to finally get the DVD, and be able to see the story that I was really drawn to on the previews.

I watched it with my son and husband, thinking that it would be a great time to sit down as family for a good movie.  My husband’s, as well as my Dad, had served in Vietnam and I thought it would be amazing to see a story about that.  It seems to be one that has just been pushed to the side, and our heroes that served, are not commemorated much…other than in the wall.

My husband and I were a bit worried at first.  The movie started out a bit odd, and then after John Paul finally met with Wayne, it got a bit “Thelma and Louise” to me.  I figured it would be best to just watch the rest, and I’m so glad that I did.  The story took a few turns, and while doing that, made a reason for some of the things in the beginning, that I thought were odd.  The overall story, and some of the final scenes were amazing.  Had us in tears and giving thanks for all of the mighty men and women who have defended our country!  I definitely recommend this movie for families to watch together, or with a church group, etc.  Some of the scenes are a bit active, though, so it might not be a good one for the younger crowd.  I believe that is the reason for the PG-13 rating, since there is nothing else that is negative.

Let me know if you have seen this, or if there is any history in your family of relatives defending our country, or your country if out of the U.S.  I really hope that there might be a part 2 of this movie, to see how everything on the outside of the story ended up.  It did finish well, and closed up all of the questions you have while watching, but as far as the character getting married and the other hopefully finding meaning for his life, I would love to see what happens.  I know, it’s just a movie…but by the end, you feel like you know them all! 🙂 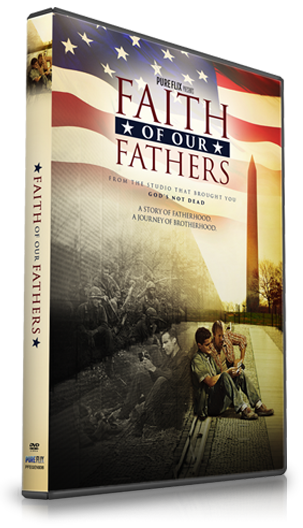 John Paul and Wayne are two young men in search of their fathers. Problem is…their fathers have been dead for 25 years. Eddie and Steven are two young men in search of their sons…whom they’ve never met. In 1969, Eddie and Steven are with their squad deep in the jungle of Vietnam on a five-day mission to retrieve fallen comrades. They write letters to their wives, often mentioning their love for their sons, one, who is an infant and one yet to be born. In 1994, John Paul and Wayne go on a five day road trip to the Vietnam Wall in Washington DC to see their fathers’ names. Along the way, reading those letters, they begin to get an understanding of who their fathers were and how they died. Trials and mishaps, both funny and sad, complicate the road trip for the boys. The horrors of war and the testing of faith manifest themselves for the young men in Vietnam. Ultimately, in parallel stories – 25 years apart – the fathers and sons are bound together forever.

Some of the Cast:

STEPHEN BALDWIN (SGT. MANSFIELD) – Stephen Baldwin’s entertainment career has spanned more than 25 years and ranges from film to TV to radio. He achieved recognition starring in the acclaimed rodeo picture 8 Seconds and he landed a breakthrough role in 1995’s double-Oscar® winning film The Usual Suspects. He played Barney Rubble in family film The Flintstones In Viva Rock Vegas. He has appeared on TV’s Celebrity Apprentice and I’m a Celebrity … Get Me out of Here! In 2006, Baldwin released his book The Unusual Suspect, which details his personal life, career, days of drug abuse, and ultimately, his becoming a born-again Christian after the 9/11 attacks. In 2008, Baldwin teamed with conservative talk-radio host Kevin McCullough for the Baldwin/McCullough *LIVE* radio show. He also worked with the Downes Brothers and David A.R. White in Six: The Mark Unleashed.

KEVIN DOWNES (JOHN PAUL) – Well known for his role as Shane Fuller in Courageous, Kevin Downes has been acting, producing, directing and writing films for more than 16 years. He most recently starred in Moms’ Night Out, which he also produced. He debuted in the youth ministry film The Crossing in 1994, which spawned his vision of producing and creating films that glorify God and bring people closer to Him. Kevin has produced numerous films, including the critically acclaimed Like Dandelion Dust (based on the best-selling novel from Karen Kingsbury), The Moment After, Mercy Streets, and the youth-oriented, action-adventure film The Lost Medallion. Behind the camera, Kevin has directed Amazing Love and Six: The Mark Unleashed.

DAVID A.R. WHITE (WAYNE) – David A.R. White is the most visible actor and producer in the Christian entertainment industry. After attending Moody Bible Institute for one year, David left Chicago and moved to Los Angeles to pursue a career in the entertainment industry. At the age of 19, David landed a recurring role on the hit CBS television sitcom Evening Shade, starring Burt Reynolds. In 1999, David began producing (as well as acting in) movies, including The Moment After and Mercy Streets. In 2006, David became a founding partner in Pure Flix, a film distribution and production company that is now the largest independent faith and family film studio in the world. David has starred in more than 25 faith films including the Pure Flix film, God’s Not Dead, which became the highest-grossing, independent faith film in 2014. David helped create and produce the comedy film Moms’ Night Out (SONY Pictures) and was a producer for Do You Believe?

SI ROBERTSON (HIMSELF) – was born April 27, 1948, sometimes known as “Uncle Si”, is an American television personality, preacher, hunter, outdoorsman, retired U.S. Army soldier, and duck-call maker at Duck Commander. He is best known for his role on A&E’s Duck Dynasty, on which he has emerged as the breakout character.  He has also appeared on other shows such as the Outdoor Channel’s Buck Commander.  Robertson was born in West Monroe, Louisiana, the sixth of seven children.  After dropping out of Louisiana Tech University in Ruston after three quarters, he was drafted into the United States Army during the Vietnam War. During the war, his mother sent him a set of Tupperware cups, two boots, and two jars of jalapeño peppers in each boot, and beans and rice, because he loves jalapeño peppers.  He is rarely seen without one of his plastic cups drinking iced tea, which he treats with equal importance.  Si retired from the Army in 1993 with the rank of Sergeant First Class (E-7).[6] Robertson is recognized for his military career with an exhibit at the Chennault Aviation and Military Museum in Monroe, Louisiana.

CANDACE CAMERON BURE (CYNTHIA) – Actress, producer, New York Times bestselling, author, and inspirational speaker Candace Cameron Bure is outspoken and passionate about her family and faith. Known to millions worldwide from her role as D.J. Tanner on the iconic family sitcom Full House, Candace continues to flourish in the entertainment industry as role model to women of all ages. With an acting career that started at the age of 5, Candace grew up in show business alongside her brother Kirk Cameron and has appeared in countless national television commercials, prime-time hits, made-for-TV movies, and feature films. Her book Reshaping It All: Motivation for Physical and Spiritual Fitness inspires women to embrace a healthier lifestyle by moving faith to the forefront of their relationship with food.

Enter to Win a DVD:

I enjoyed this movie! I think I have watched it three times now. Great review, thanks for sharing!!!!

It was a great one!!

I want to see this. I like watching war movies and I like that this one is more family-friendly. I’ll have to remember to watch this one!

This was a good movie. My husband love all the cameos of the actors

It was definitely a great one to watch with my family!