So to get on with this “Things That Brings Back Memories” blog post for this week, I’m going to pick “Down Under” by Men at Work, which was released in 1980 as the “B” side of a record.  The song on the “A” side is one that even I don’t remember.  Shows what the people thought would be popular back then, huh?  If you don’t know about the song that I’m talking about, here it is:

The song “Down Under” was one that was always on the radio when I was younger.  Everyone knew most of the words (even if they sang something different), and half of us wanted to find out what the heck Vegemite was!!  Doing some research, I found that Vegemite is a dark brown Australian food paste made from leftover brewers’ yeast extract with various vegetable and spice additives developed by Cyril P. Callister in Melbourne, Victoria, in 1922.   It is used as a spread for sandwiches, toast, crumpets and cracker biscuits as well as a filling for pastries.  Vegemite is salty, slightly bitter and malty, and rich in umami – similar to beef bouillon.  Okay, never mind…no longer interested!! :p

More Info on “Down Under / Men at Work”: 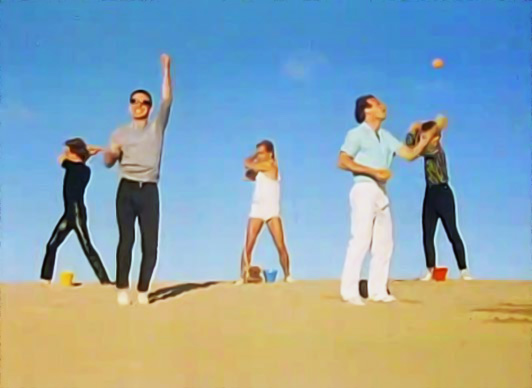 “Down Under” (also known as “Land Down Under”) is a song recorded by Australian rock band Men at Work. It was originally released in 1980 as the B-side to their first local single titled “Keypunch Operator”, released before the band signed with Columbia Records. Both early songs were written by the group’s co-founders, Colin Hay and Ron Strykert. The early version of “Down Under” has a slightly different tempo and arrangement than the later Columbia release.  The most well known version was then released on Columbia in October 1981 as the third single from their debut album Business as Usual (1981).

The song went to number one in their home country of Australia in December 1981, and then topped the New Zealand charts in February 1982. Released in North America in mid-1982, the song topped the Canadian charts in October. In the United States, the song debuted on the Billboard Hot 100 on 6 November 1982 at No. 79, and reached No. 1 in January 1983 where it spent four non-consecutive weeks. It eventually sold over two million copies in the US alone. Billboard ranked it at No. 4 for 1983.

In the UK, the song topped the charts in January and February 1983, and is the only Men at Work song to make the UK top 20.  The song also went No. 1 in Ireland, Denmark and Switzerland, and was a top 10 hit in many other territories. It has become a popular and patriotic song in Australia.

The lyrics are about an Australian man traveling the globe, proud of his nationality, and about his interactions with people he meets on his travels who are interested in his home country.

The lyric “He just smiled and gave me a Vegemite sandwich”, from the song’s second verse, has become a well-known phrase.

Slang and drug terms are used in the lyrics:  Travelling in a fried-out Kombi, on a hippie trail, head full of zombie.

In Australian slang “fried-out” means overheated, Kombi refers to the Volkswagen Type 2 combination van, and having “a head full of zombie” refers to the use of a type of marijuana.  Cultural slang is also used: after the second verse the refrain is “where the beer does flow and men chunder”; “chunder” means vomit. 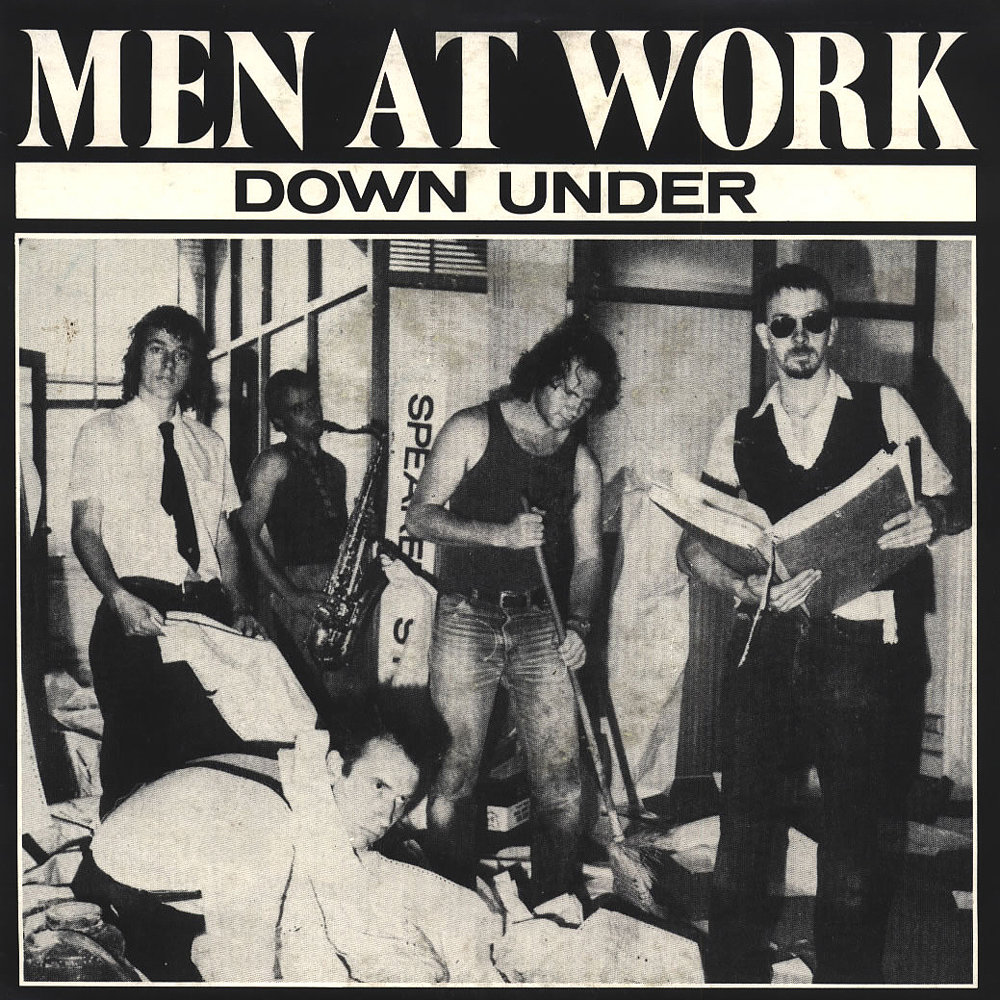 Men at Work were an Australian rock band, which formed in 1978. Their founding mainstay was Colin Hay on lead vocals; he formed the group with Jerry Speiser on drums and Ron Strykert on lead guitar. They were joined by Greg Ham on flute and keyboards and then John Rees on bass guitar. This line-up achieved national and international success in the early 1980’s. In January 1983, they were the first Australian artists to have a simultaneous No. 1 album and No. 1 single in the United States Billboard charts – Business as Usual (released on 9 November 1981) and “Down Under” (1981), respectively. With the same works, they achieved the same distinction of a simultaneous No. 1 album and No. 1 single on the Australian, New Zealand and United Kingdom charts. Their second album, Cargo (2 May 1983) was also No. 1 in Australia, No. 2 in New Zealand, No. 3 in the US, and No. 8 in the UK. Their third album, Two Hearts (3 April 1985), reached the top 20 in Australia and top 50 in the US.

At the Grammy Awards of 1983 they won the Best New Artist category; while at the ARIA Music Awards of 1994 they were inducted into the related Hall of Fame. Men at Work have sold over 30 million albums worldwide. According to Australian musicologist, Ian McFarlane, “rrespective of the band’s fairytale rise to prominence, their phenomenal success inextricably created worldwide interest in Australia and Australian music… they simply opened the floodgates with little more than a clutch of great songs” The group disbanded in 1986 and reformed in 1996 to disband again by 2002.

In May 2001 “Down Under” was listed at No. 4 on the APRA Top 30 Australian songs and Business as Usual appeared in the book, 100 Best Australian Albums (October 2010). In February 2010 Larrikin Music Publishing won a case against Hay and Strykert, their record label (Sony BMG Music Entertainment) and music publishing company (EMI Songs Australia) arising from the uncredited appropriation of “Kookaburra” for the flute line in “Down Under”. On 19 April 2012 Greg Ham was found dead at his home of an apparent heart attack. 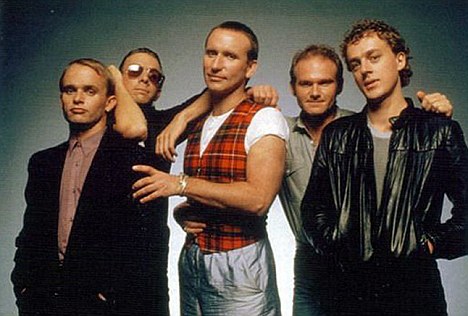 So funny. I remember that song growing up too, and always wondering what that was. Thank you for sharing and thank you for linking up at the #HomeMattersParty this week. Hope to see you again next week.

We learn something new every day, right Shann? 🙂

There are so many songs from the 80’s that bring back memories for me. It’s hard to believe that I am old enough that now the 80’s genre is considered oldies but goodies lol. I am popping over from google+ #bloggerlove community. Think I will take a look around while I am here. If you are ever interested in joining a linky I host one on the weekends called #momsterslink … you can always get to the most recent one here—–>http://domesticatedmomster.com/my-link-ups/

I love how music can leave a mark! 🙂

I have tasted Vegemite. Trust me, you aren’t missing anything 😛 They look like a fun group though!

You are so brave, Sarah!! I’ll take your word for it, and leave it on the shelf! 🙂

I am not familiar with this song or group. I have heard of Vegemite. I might have offer a Vegemite sandwich to someone, lol. Thanks for sharing! 🙂

Tee hee!! It’s definitely something that only a few would like, I guess! 🙂

Oh, I’m sorry Daisy – made you listen to it again!! ha/ha

I think I want me a Vegemite sandwich! “Not really” but this is one of the best songs ever as far as I am concerned!

I could never bring myself to try one of those. :p

That’s so funny about Vegemite! That’s cool that it became the unofficial national anthem for Australia, too. So many interesting facts, I always enjoy learning them 🙂

I’m glad you like it – it’s always fun to find out the extra stuff! 🙂

I remember this song. My husband still listens to the 70 and 80 music in the car.