For this week’s “Things That Bring Back Memories” post, I am going to pick something in the topic of “MOVIES” and go with Crocodile Dundee.  This movie was released in 1986, and was a crack-up.  Some crazy Australian adventurer who decides to visit the city!  I think that even myself, being from the states would have some questions visiting New York! ha/ha

The movie was one that still has people thinking about it.  Every time I hear an ad for the Outback Steakhouse, I think of Crocodile Dundee.  He probably ate some bloomin’ onions in the outback, right?  If, for some reason, you are of an age that makes it difficult to remember Crocodile Dundee, here’s a preview of the movie that we all saw before it came out:

Did you ever watch the Crocodile Dundee movie when you were younger? or have you seen it on TV or Netflix later in life?  Let me know what you thought of it, and if you have any memories of it in your life!

G'Day Mate! Who remembers the Crocodile Dundee movie from 1986? Find out more about it at #TigerStrypesBlog Click To Tweet

Inspired by the true life exploits of Rodney Ansell, the film was made on a budget of under $10 million as a deliberate attempt to make a commercial Australian film that would appeal to a mainstream American audience, but proved to be a worldwide phenomenon. Released on April 30, 1986 in Australia, and on September 26, 1986 in the United States, it was the second-highest-grossing film in the United States in that year and went on to become the second-highest grossing film worldwide at the box office as well, with an estimated 46 million tickets sold in the US.

There are two versions of the film: the Australian version, and an international version, which had much of the Australian slang replaced with more commonly understood terms, and was slightly shorter. Although the film was a hit both in Australia and abroad, it became controversial with some Australian critics and audiences–who resented the image of Australians as being “redneck” (or “ocker”).  These views were largely put to rest as the unsophisticated “larrikin bushman” has long been firmly entrenched in Australian-related pop culture.

Sue Charlton is a feature writer for Newsday (which her father owns) and is dating her editor, Richard Mason. She travels to Walkabout Creek, a small hamlet in the Northern Territory of Australia, to meet Michael J. “Crocodile” Dundee, a bushman reported to have lost half a leg to a saltwater crocodile before crawling hundreds of miles to safety. On arrival in Walkabout Creek (by helicopter due to its remote location), she cannot locate Dundee, but she is entertained at the local pub by Dundee’s business partner Walter “Wally” Reilly, who does his best to explain the town and some of its inhabitants, including the towering hulk Donk, who wins money by placing a glass of beer on his head and challenging people to try and spill the 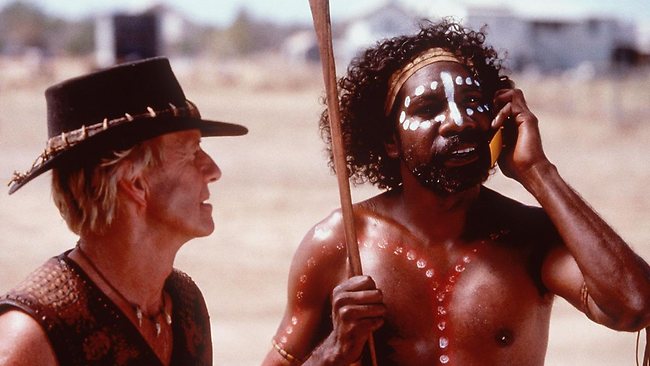 beer by punching him in the stomach. When Dundee arrives that night, Sue finds his leg is not missing, but he has a large scar which he refers to as a “love bite”. While Sue dances with Dundee, a group of city kangaroo shooters make fun of Dundee’s status as a crocodile hunter, causing him to knock the leader out with one punch. Feeling lucky, he then challenges Donk and makes him spill the entire glass by kissing him on the lips and startling him into dropping the tankard.

At first, Sue finds Dundee less “legendary” than she had been led to believe, being unimpressed by his pleasant-mannered but uncouth behaviour and clumsy advances towards her; however, she is later amazed, when in the Outback, she witnesses “Mick” (as Dundee is called) subduing a water buffalo, taking part in an aboriginal tribal dance ceremony, killing a snake with his bare hands, and scaring away the kangaroo shooters from the pub from their cruel sport of shooting kangaroos. Mick shoots at their truck using a dead kangaroo as cover, making them think the kangaroo is shooting at them, which in their drunken state causes them to flee. The next morning, offended by Mick’s assertion that as a “sheila” (Aussie slang for a female) she is incapable of surviving the Outback alone, Sue goes out alone to prove him wrong but takes his rifle with her at his request. Mick follows her to make sure she is OK, but when she stops at a billabong to refill her canteen, she is attacked by a large crocodile and is rescued by Mick. Overcome with gratitude, Sue finds herself becoming attracted to him.

Sue invites Mick to return with her to New York City on the pretext of continuing the feature story. At first Wally scoffs at her suggestion, but he changes his mind when she tells him the newspaper would cover all expenses. Once in New York, Mick is perplexed by local behavior and customs but overcomes problematic situations including two encounters with a pimp and two attempted robberies. After this Sue realizes her true feelings for him, and they kiss.

At a society dinner at her father’s home in honor of Sue’s safe return and of Mick’s visit, Richard proposes marriage to Sue, and in a haze of confused emotions, she initially accepts in spite of Richard having recently revealed his self-centered and insensitive “true colors” during a period of intoxication. Mick, disheartened at Sue’s engagement, decides to go ‘walkabout’ around the US, but Sue has a change of heart and, deciding not to marry Richard, follows Mick to a subway station. There, she cannot reach him through the crowd on the platform, but has members of the crowd relay her message to him, whereupon he climbs up to the rafters and walks to Sue on the heads and raised hands of the onlookers and kisses her.

Some of the Crocodile Dundee Characters: 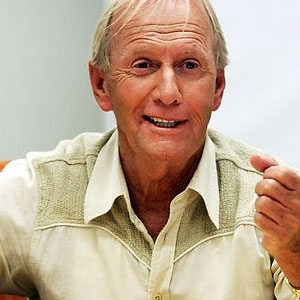 Paul Hogan (Michael J. “Crocodile” Dundee) was born October 8, 1939.  He became a worldwide success with his irresistible comic performance in Crocodile Dundee (1986), which he created and co-wrote. This earned him a Golden Globe Award for Best Actor as well as an Academy Award nomination (for Best Screenplay). The versatile actor got his start in Australian television in a recurring role as comic relief on A Current Affair (1971). An expanded version entitled The Paul Hogan Show (1973) premiered on Australia’s Nine Network and quickly propelled him to the top of the ratings chart. His dramatic role on the critically acclaimed television series Anzacs (1985) and his work in promoting Australia worldwide invested him into the Order of Australia and led to his appointment as “Australian of the Year”.  Hogan was the executive producer/writer/star of the feature films Almost an Angel (1990) and Lightning Jack (1994) and starred in Flipper (1996) and Floating Away (1998). American audiences also remember Hogan from his now legendary commercials for the Australian Tourist Commission in which he invited us to say “g’day” and come “down under” so he could “slip another shrimp on the barbie”. In the late 1990’s and early 2000’s, he appeared in commercials for Subaru Outback automobiles. He reprised his famous role as the outback adventurer in the long awaited sequel Crocodile Dundee in Los Angeles (2001).

Linda Kozlowski (Sue Charlton) was born January 7, 1958.  Kozlowski is a Juilliard graduate with Broadway play experience, who found movie success in the billabongs of Australia with frequent co-star Paul Hogan. The film romance with her Crocodile Dundee (1986) costar grew into a real-life relationship during the filming of the first two movies. Linda married Paul Hogan in 1990. The couple

reside in California and have one son, named Chance. In 2001, Linda and Paul returned to their popular on-screen romance roles to complete the Crocodile Dundee trilogy. 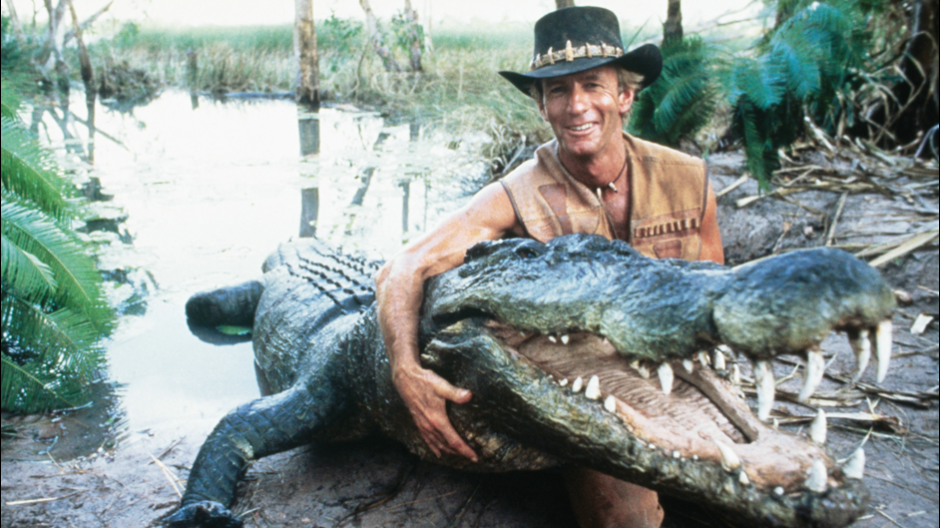 Crocodile Dundee Facts – Did You Know?

When Paul Hogan gave an interview for Crocodile Dundee in Los Angeles (2001), he put to rest the myth that there was a real Crocodile Dundee. He assured the interviewer that there was not, and that the idea for the character came from his own head. Hogan admitted that on a trip to New York he felt like a complete fish-out-of-water and the idea began to form in his head.

The Sydney Harbor Bridge is shown in the beginning of the movie from the hotel window while Sue is on the phone to New York. Paul Hogan helped paint this bridge before he started his life as an actor and was said to have kept his co-workers laughing a good bit of the time.

The “quotes” around “Crocodile” in the title were added for the American release to ensure people didn’t think that Dundee was a crocodile.

There were steel, rubber and aluminum versions of the Bowie knife on set. Hogan kept one of the steel knives after the movie and promised never to sell it.

Paul Hogan had no idea the movie would be a huge international success. “I thought I was making a nice little comedy movie for Australia.”

I loved this movie when I was a kid!

It was definitely a great one. I always remember waiting for him to come out of the door at the Outback whenever we went! ha/ha

I love this frickin movie so much that I’ll watch it every time I see it on the TV guide!

It’s definitely one that can still make us laugh!

This movie was an old classic favorite of ours!!! Brings back memories!

Those are the ones that I love….some of the movies today, you don’t want to watch again.