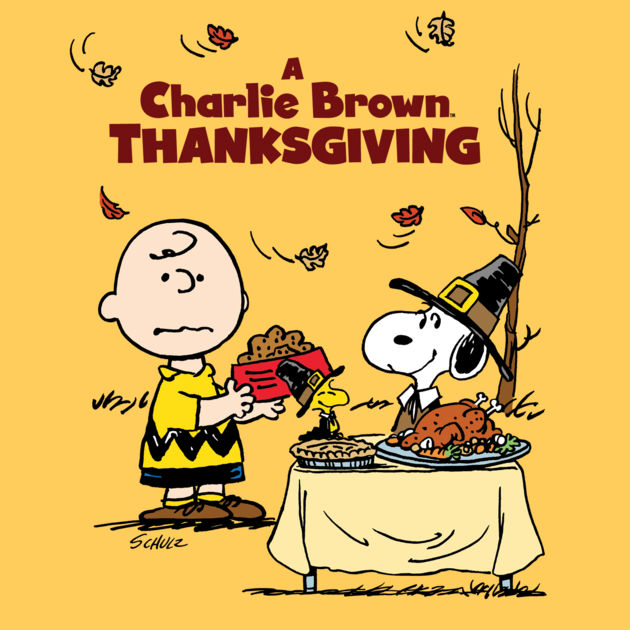 For this week’s “Things That Bring Back Memories” post, I am going to pick something in the topic of “TELEVISION” and go with “A Charlie Brown Thanksgiving“.  This television show, which originally aired on the CBS network on November 20, 1973.  That was even before I was born, wow, I didn’t know it had been around THAT LONG! 🙂

It was such a great show to watch with family.  Even as I get older, I still want to watch the Charlie Brown cartoons during the holidays.  What’s wrong with that? 🙂  There’s not much left on TV today, that is safe for a family to sit down together for.  Just like Polar Express for Christmas, A Charlie Brown Thanksgiving is just as tradition as the turkey for that holiday!  For those of you don’t remember it, or haven’t seen it, here’s a video of the commercial:

So, did you ever watch this show when you were younger? or have you seen it on TV later in life?  Let me know what you thought of it, and if you have any memories of it in your life!

The #MondayMemories for today are A Charlie Brown #Thanksgiving - do you remember that show? Find out more at Click To Tweet 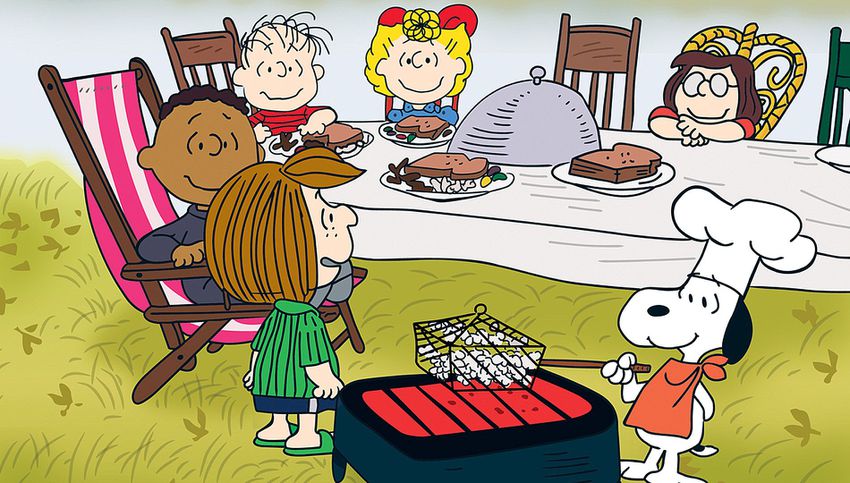 A Charlie Brown Thanksgiving is the tenth prime-time animated TV special based upon the popular comic strip Peanuts, by Charles M. Schulz. It was originally aired on the CBS network on November 20, 1973, and won an Emmy Award the following year. Currently, the special is aired every November in prime time on the ABC network. It was the third holiday special after A Charlie Brown Christmas in 1965 and It’s The Great Pumpkin, Charlie Brown in 1966.

The special opens with Lucy enticing Charlie Brown to kick the football she is holding. Charlie Brown at first refuses, correctly suspecting that Lucy will pull it away as always; but Lucy convinces him that kicking the football is a Thanksgiving tradition, and that being asked to do so is an honor. Charlie Brown decides that Lucy would never pull her trick on a national holiday, and ends up getting deceived and landing flat on his back once again.

Charlie Brown and Sally are preparing to go to their grandmother’s place for Thanksgiving dinner when Charlie Brown gets a phone call from Peppermint Patty, who invites herself over to Charlie Brown’s house for the holiday dinner. Two quick subsequent phone calls add Marcie and Franklin to the guest list, and since Charlie Brown cannot get a word in edgewise with Patty, he quickly finds himself in a quandary with no easy solution—at least not until Linus shows up. 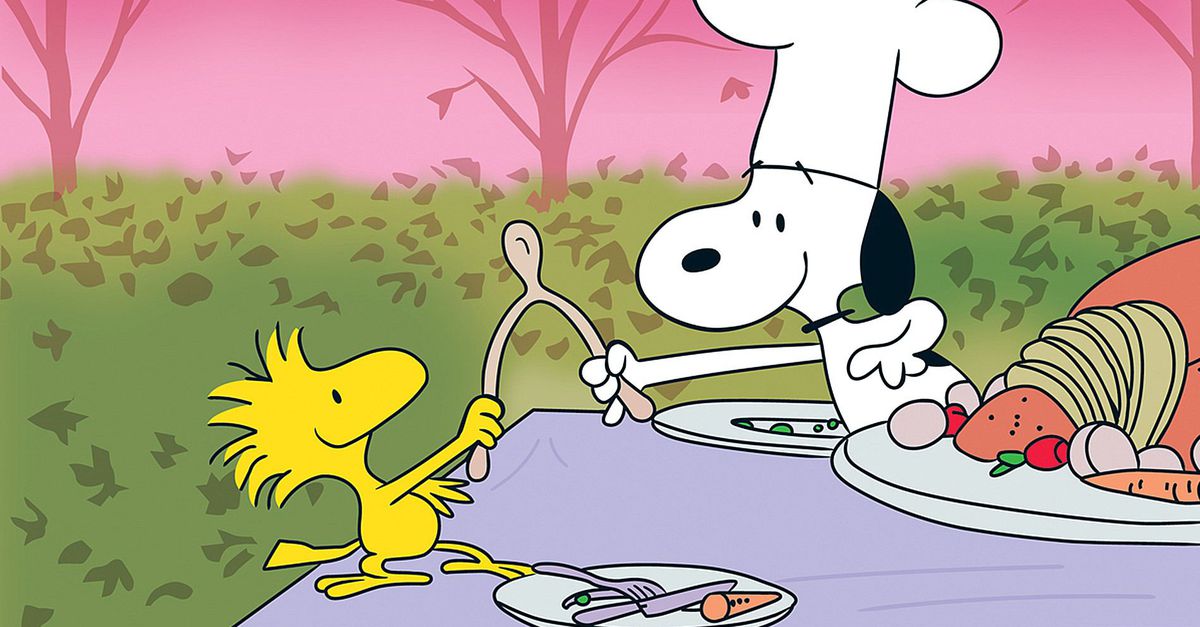 The guests arrive and make their way to the backyard for the Thanksgiving feast. Linus leads the group in prayer that details the First Thanksgiving in 1621. Each plate setting includes an ice cream sundae (vanilla ice cream with whipped cream and a cherry) in a large sundae bowl. Snoopy serves up the food, throwing the plates to each guest Frisbee-style. Each person gets two slices of buttered toast, and a handful each of pretzel sticks, popcorn, and jelly beans.

At first Patty is shocked, but her shock quickly turns to outrage, and she angrily berates Charlie Brown for the supposed meal. Embarrassed and 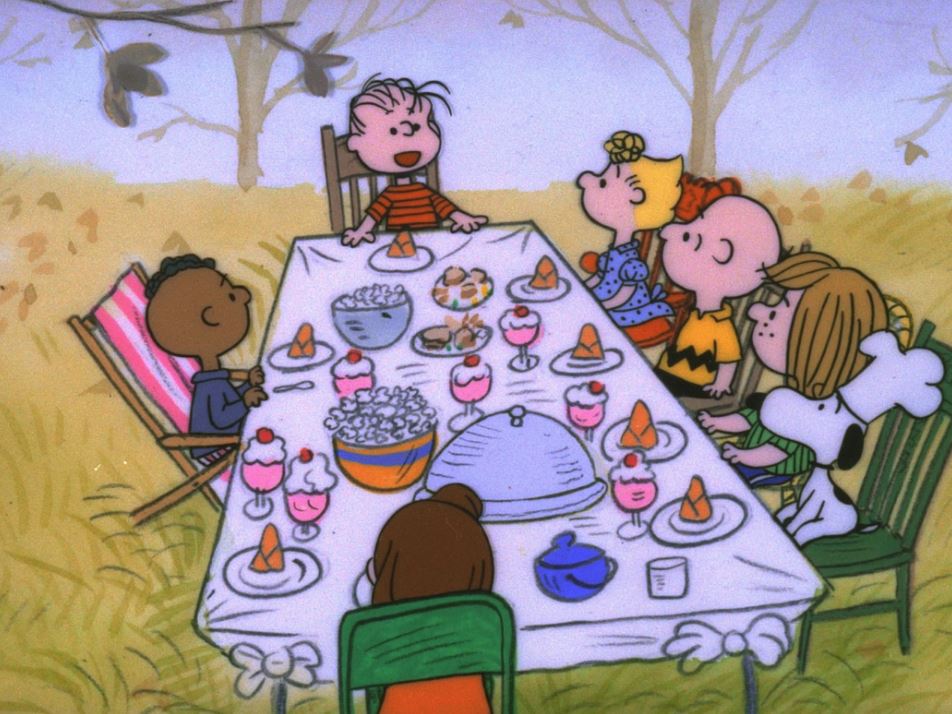 dejected, Charlie Brown timidly leaves the table and goes back into the house. Patty’s tirade continues until Marcie gently reminds her that he didn’t invite her, but that she invited herself along with Marcie and Franklin. Coming to her senses, Patty asks Marcie to go and apologize to Charlie Brown on her behalf. Marcie reluctantly does so, but Patty soon follows her and apologizes to Charlie Brown herself.

In the midst of the quasi-feast, Charlie Brown loses track of time: the clock strikes four, reminding him that he and Sally are supposed to be at their grandmother’s home for dinner in half an hour. So he calls his grandmother to explain his situation. When he mentions that his friends have not eaten yet, his grandmother invites all his friends over with him for Thanksgiving dinner; the idea is welcomed with cheers from everyone. As the kids leave, they sing the song “Over the River and Through the Woods”. However, the lyrics “grandmother’s house” causes Charlie Brown to ironically comment that his grandmother actually lives in a condominium.

After the kids leave, Snoopy and Woodstock go to the doghouse and cook up their own traditional Thanksgiving meal that includes a turkey, complete with all the trimmings. They pull apart the wishbone, with Woodstock snapping off the bigger piece. As its release hurls him through the air, he smiles, perhaps because his longtime wish to fly straight and head-up like a normal bird has been granted. Over the end credits, the two friends each devour dessert: a large piece of pumpkin pie. They then sit back with contented smiles as Woodstock pats his full stomach.

Some Interesting Facts – Did You Know?

When Charlie Brown first calls his grandmother, the phone does not appear until he starts dialing.

There are absolutely no adults in this special. Normally, the only adult represented in most of the series was the offstage teacher, whose now-iconic “WAH-WAH-WAH” voice was composed by Guaraldi with a trombone.

Mendelson edited the special from its original 25 minutes to 22 minutes when it aired on CBS, cutting out the scene in which Woodstock eats turkey. It returned to its original state in 2001 when the special moved to ABC.

Sally claims that she has not finished her Halloween candy, but in It’s the Great Pumpkin, Charlie Brown, she misses out on trick-or-treating because she was waiting on the Great Pumpkin with Linus.

Linus’s now-famous Thanksgiving speech about Elder William Brewster at the Pilgrim’s first Thanksgiving dinner was animated 13 years later into its own special, This is America, Charlie Brown: The Mayflower Voyagers.

I loved watching Charlie brown. This post took me back a few years. Thanks for posting so many memories with this show!!

It’s definitely one to remember! 🙂

I always remember my sister being a big Charlie Brown fan but I don’t remember much of it myself. I love looking back at old kids programmes though – it was such a different collection to what is available now! Thanks for linking up with #TwinklyTuesday

So true about being a different collection. Any more, even I’m afraid to watch certain “cartoons” on TV. 🙁

I haven’t seen this one but I have seen the one with the giant pumpkin patch. I too love Charlie Brown, he brings back fond childhood memories, and I was born back then.

I love the Great Pumpkin one, too! 🙂

I am 48 years old and STILL love this show! Great memories of my childhood fill me during every scene. I love the Interesting Facts! Now I want to rewatch it so I can see that telephone magically appear.

I always love finding out weird things about shows that I think I know everything about!! ha/ha

I used to love this show!! I can’t wait to watch this movie with my kids. I hope they like it as much as I did.

That was one of my favorite parts of the holidays! Getting to sit down and watch the Charlie Brown specials! So happy they’re still around!

It shows how great they were, that would last this long! 🙂

Although Charlie Brown is nostalgic, brings back memories of who was around and what was going on I must admit that I never got fully into the shows. I always felt like part of it was missing, like it wasn’t quite developed. Before anyone goes all wowza on me I do love America and most things in my childhood. lol

That’s why there are different shows for different people, Gladys. 🙂 You have the right to your opinion.