Skip to content
I received a new DVD called “A Long Way Off” from Elliott with Edify Media, Inc. and was asked to watch the movie and post a review on my blog about it.  I received the DVD mentioned above for free in the hope that I would mention it on my blog. Regardless, I only recommend products or services I use personally and believe will be good for my readers. I am disclosing this in accordance with the Federal Trade Commission’s 16 CFR, Part 255: “Guides Concerning the Use of Endorsements and Testimonials in Advertising.”

I received the movie called “A Long Way Off”  from Elliott at Edify Media, Inc.  I am always so excited when I see an email coming from him, because I know it’s going to be a movie that I will love and is safe for my entire family.  In today’s world, it’s a shame how you have to be on guard with what your kids are watching, and sometimes even yourselves.  Everything from Edify and Word Entertainment is always wonderful, family friendly and some you would love to watch again!!

The movie started out with the guy named “Jake” working on his father’s farm and not really liking “working for a living”.  He asked for his inheritance early to move to the city and become an investor.  He then is involved with things that aren’t the greatest.  Does that story sound familiar to you?

This movie was so close to the bible story of the Prodigal Son, it was great.  I love to see the stories of the Word in a way that you can understand them in today’s world and this one hit it on the head.  Even with having to tend the pigs, I loved it.  Great story, great teaching within and something you can talk about as a family.
Just like it says in Proverbs 22:6 “Train up a child in the way he should go; even when he is old he will not depart from it.”  They might go through negative times and have to suffer the results of that, but if you’ve done a good job in your parenting, there’s always the hope that they will remember and turn away from that negative life.
All in all, the story was great, and definitely one that I will watch again! 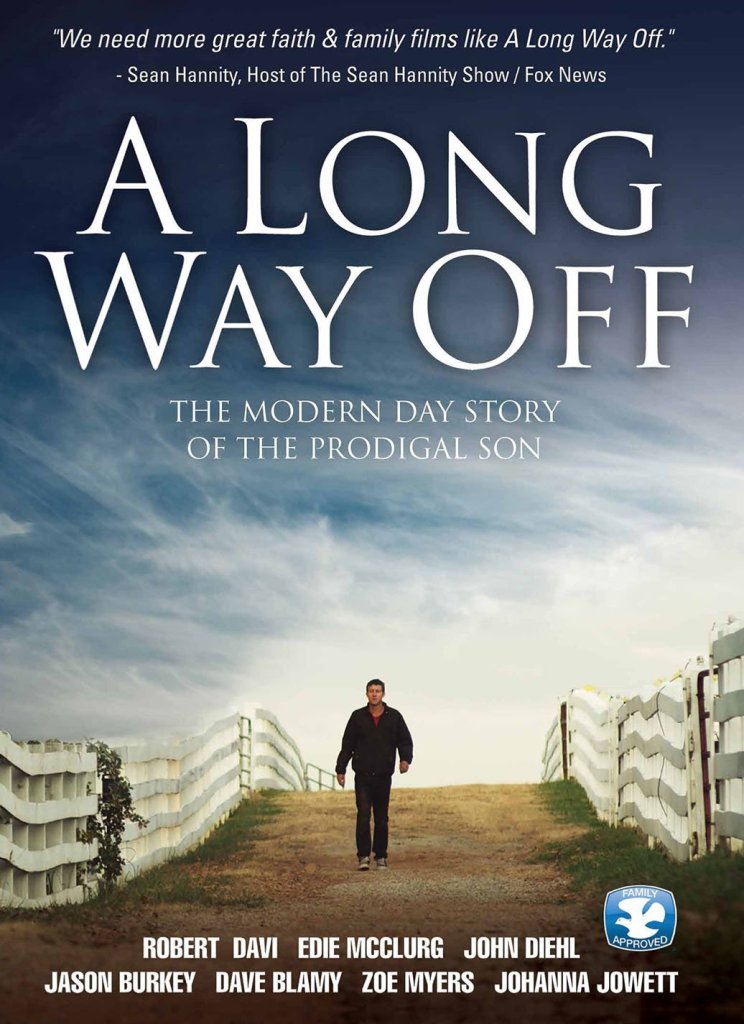 Jake (played by Jason Burkey – October Baby, Mom’s Night Out) is tired of living on the family farm, submitting to the rules of his Father, Mr. Abraham (played by John Diehl (Stargate, Jurassic Park III, A Time to Kill, The Client).

One day, Jake demands an early inheritance from his father. Much to the surprise of Jake – and Jake’s older brother, Seth (played by Dave Blamy – Destiny Road, Mandy & the Forgotten Christmas) – his Father agrees to Jake’s request and Jake is off to the big city.

Jake charges into the city, intent on proving that his modern ways are better than his dad’s traditional ways. He arrives in the city and embarks on his new life. For a while, he does well-surprisingly well all while taking huge business risks. His fast lifestyle finds him making “easy” money – even winning a bet with an interested and attractive local coffee house barista named Summer (played by Zoe Myers – Anchorman 2, ATL, Destiny Road).

Jake seemingly has got the it all: money, ladies, prestige – but then suddenly, he loses it all and finds himself on the wrong end of the deal he made with mobster Frank and running for his life. And then, it gets worse.

Just when Jake thinks he’s hit bottom, the bottom really drops out – and he is now eating out of dumpsters and literally eventually ends up in the hog pen. He’s burned all his bridge and now, out of options, Jakes is forced to confront himself and, if he is to survive, he must discover who he really is.

Featuring a popular and recognizable cast, including Edie McClurg (Ferris Bueller’s Day Off) and cameos from the likes of world famous pollster Scott Rasmussen, Talk Show host Sean Hannity and Psychologist Dr. Bev Smallwood, A LONG WAY OFF is a dramatic motion picture with high artistic merit and educational value. Thematically, it is all about family values, loyalty and friendship, sacrifice and love— positives every viewer can relate to on a very intimate level.

A LONG WAY OFF will have you laughing, crying and entertained in a profound, powerful, and life-changing way.

To win a copy for yourself, enter here:

“A Long Way Off” DVD Giveaway

If you don’t want to wait, head over here to purchase one now!

Connect With The Movie

I received a new DVD called “The Perfect Summer” from Elliott with Edify Media, Inc. and was asked to watch the movie and post a review on my blog about it.  I received the DVD mentioned above for free in the hope that I would mention it on my blog. Regardless, I only recommend products or services I use personally and believe will be good for my readers. I am disclosing this in accordance with the Federal Trade Commission’s 16 CFR, Part 255: “Guides Concerning the Use of Endorsements and Testimonials in Advertising.”

So excited to have won, just received my DVD today! Thanks so much 🙂

Looks like a good movie. I will have to check it out.

My son who is in the Navy can be a prodigal son. He was a tough child to raise but I always love him no matter what.