I got the “23 Blast” movie from FlyByPromotions, was asked to watch it, and give my opinion. When I got it, I told my husband that it seems like every Christian movie has to do with football…“Facing The Giants“, “Abel’s Field“, etc. We’re not a football family, the sports we love have wheels, and go very fast!! Go #88!! 🙂 I figured that the other movies were good, and if Laura Beth from FlyBy was promoting it, it had to be worth our time to watch it.

I had never heard of Travis Freeman before, but watching this movie, and seeing the story of his life, made me want to find out more about him. Heading over to his website, I saw what a difference he was making in so many lives, even through the adversity. As the bible says in Romans 5:3-5, “More than that, we rejoice in our sufferings, knowing that suffering produces endurance, and endurance produces character, and character produces hope, and hope does not put us to shame, because God’s love has been poured into our hearts through the Holy Spirit who has been given to us.” Even when you feel that you’re not able, God can change that! Seeing the story of this great kid, and how he got through childhood, which is already a struggle sometimes, and still came out with a great story of the mark he made, was amazing.

In the special features of the movie is the story of his good friend, Jerry Baker. It really makes a mark of what the youth of today deal with. I pray that they are able to learn from some of his mistakes, and move forward in their lives to be a light to those around them.

When a high school football star is suddenly stricken with irreversible, total blindness, he must decide whether to live a safe, protected life or to summon the courage through playing football to step back into the world.

23 Blast is based on the amazing, true story of Travis Freeman. A typical teenager growing up in a small town in Kentucky, Travis is a local hero on and off the field. In the prime of his youth, he is unexpectedly stricken with an infection that destroys his optic nerve; he becomes blind overnight.

Under the influence of parents who love him, a physical therapist who challenges him, a coach who inspires him, and a best friend who he cannot bear to leave behind, Travis shows us what true bravery is by competing on the gridiron, helping his team advance to the State playoffs. We follow Travis and Jerry Baker, his closest friend, from the time they meet on the football field as kids through high school. Jerry’s attraction to the dark side of teenage temptations threatens to pull the friends apart. It is only on the football field where they truly connect.

Depicting a story of hope triumphing over despair, of courage and faith overcoming fear and of victory prevailing over adversity, 23 Blast is designed to encourage and uplift audiences. 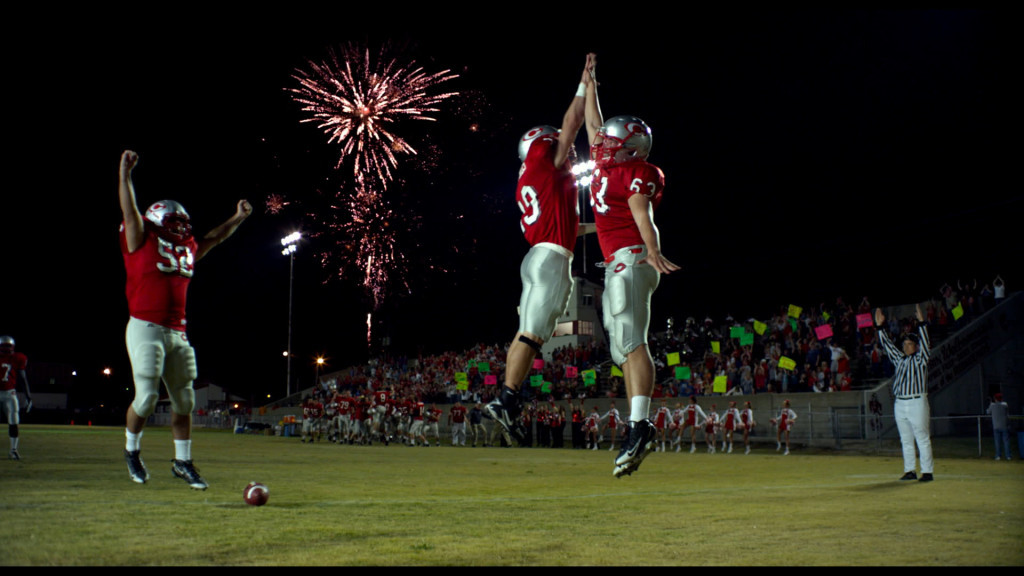 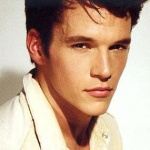 Mark Hapka (plays Travis Freeman) started acting while doing theater in upstate New York until his passion for movie making brought him to Los Angeles. Within a year he was working in television and doing small independent movies. Though most viewers know him as young Dr. Nathan Horton on the hit series, Days of our Lives, he also recurred on the show Ghost Whisperer as well as having roles on Greek, Hannah Montana and Cold Case to name a few. Mark was the lead in the movie Midgets vs. Mascots, which was presented at the Tribeca Film Festival and took 3rd place out of 90 films. Mark’s preparation for 23 Blast started in junior high school where he played JV football positioning at guard and tackle. Dylan pointed out, “We needed an audience to believe that Travis could play both running back and receiver when he wasn’t blind, but could make the transition to lineman when he lost his sight. Mark gave us total credibility in that department. He was eager to put the pads on and mix it up!” Mark added, “In preparation for the movie I had to choose a build that would work for both positions. You can’t have a scrawny center and you sure can’t have a tubby receiver. There is a sweet irony to my story when it comes to football and acting. Once I reached high school I had to make a choice. Play my final year of varsity football or take on the lead role in the schools production of THE GLASS MENAGERIE. There was major conflict in scheduling and I could only do one! I guess that’s when I started taking my acting career seriously,” Hapka joked. His most physically demanding role was in The Danny McKay Project where he lost 40 pounds over the course of a 45 day shoot to portray the title character Danny McKay who suffered from a terminal brain tumor. Mark is very hands on when it comes to his projects. He not only starred alongside Olympic Wrestler Kurt Angle in his recent feature, Beyond the Mat, he wore the hats of both Producer and Music Supervisor as well. Mark is currently directing the series THERAPY REQUIRED and has plans to direct his first feature later this year. 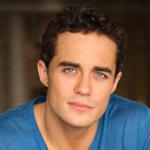 Bram Hoover (plays Jerry Baker) grew up in the small town of Corbin, Kentucky, the real life film location for 23 Blast. Initially headed toward an athletic scholarship, it took an elective drama class to fuel a love of acting, inspiring a new future at Loyola University in Los Angeles. Studying under renown acting coach Michelle Danner, Bram soon landed a guest spot on General Hospital as well as a recurring role as Travis on Days of Our Lives. Soap opera exposure provided a casting opportunity for the web series California Heaven, where Bram soon found himself portraying lead character Dominic Corrigan. He continued in television with guest appearances on such shows as Dirt with Courtney Cox, Three Rivers on NBC, and the CW’s 90210. Balancing film and television, Bram secured roles in the films Buried Alive, The Next Race and 40 Hours as well as enjoying frequent advertising and print work in his spare time. Most recently, Bram’s commercial was selected as one of the coveted top 5 Doritos super bowl ads. In 23 Blast, as Jerry Baker, Bram was able to deliver a layered performance, balancing the complexity of a troubled teenager yet at the same time expose his vulnerability and compassion. Bram’s personal relationship with Jerry laid the groundwork for a clear understanding of how he wanted the audience to embrace the character and expose the Jerry that very few people knew. As co-writer of 23 Blast, Bram relied on first-hand experience as Travis Freeman’s real life teammate. “I was a freshmen when Travis was a senior. Freshmen are always in awe of seniors, but everyone watching Travis was in awe. The opposing teams never knew he was blind, so they were in totally disbelief when they found out.” When it became evident this was no ordinary story but one of great faith, Bram realized Travis’ message of hope and encouragement reached way beyond his accomplishments on the football field. For Bram, delivering that message became the motivation and driving force for writing the script.

About the actual Travis Freeman:

Raised in foothills of Appalachian mountains, Travis spent his early childhood skiing its lakes with his parents on their boat, playing games with his friends, and dreaming of the day he’d play for the Corbin Redhounds. At 12 years old, Travis became sick with what was eventually diagnosed as Cavernous Sinus Thrombosis (CST). It had settled and taken hold, masquerading for 9 days as nothing more than a severe headache. After the surgery that saved his life, Travis lost his eyesight. After a year of adjusting to life in the dark, Travis joined the football team his 8th grade year as Center. Together, they won their conference championship. Travis continued to play all four years of high school. His story made its way to New York and was featured by The Today Show, Dateline, and other national media. Travis obtained his Bachelor’s degree in Business Administration from the University of Kentucky, where he also served its football team as an equipment manager. He went on to earn his Master of Divinity and Doctorate of Philosophy from The Southern Baptist Theological Seminary. Travis is now an adjunct professor at University of the Cumberlands and serves as CEO of The Freeman Foundation, a nonprofit dedicated to promoting the truth that disability does not equal inability.

Enter to win a copy of the DVD:
23 Blast DVD Giveaway

“Disclosure (in accordance with the FTC’s 16 CFR, Part 255: “Guides Concerning the Use of Endorsements and Testimonials in Advertising”): Many thanks to Propeller Consulting, LLC for providing this prize for the giveaway. Choice of winners and opinions are 100% my own and NOT influenced by monetary compensation. I did receive a sample of the product in exchange for this review and post. Only one entrant per mailing address, per giveaway. If you have won a prize from our sponsor Propeller / FlyBy Promotions in the last 30 days, you are not eligible to win. Or if you have won the same prize on another blog, you are not eligible to win it again. Winner is subject to eligibility verification.”

My dad went into the Navy at a young age with out much in the way of education and in his later years he went through a lot to make it to college and took classes before he became to sick to keep attending. He was an inspiration.

Just standing up to try means a lot. And, thanks from our family for his service!! 🙂

This looks like a great film. I love films that are relatable and have great characters like this one does.

I love motivational movies like this! I’m looking forward to connecting with this movie.

It sure has a great story!! …plus, I love knowing that it’s a true one! Thanks for stopping by!

I think this would be a great movie to watch on our weekly family movie night, especially at this time of year. Thanks for the chance to win it.

Well I think we all have own own battles some spoken others unspoken. This looks like an awesome movie and my son is a big football fan. I know he would enjoy it since we also liked “Facing The Giants”. Fingers crossed I win!

This looks like an amazing movie with a nice strong, solid cast. I would love to watch it. Thanks for the great information

I hadn’t heard of this until now, but it sounds really good. I could watch this with my husband one evening after putting my little one to bed. 🙂

Looks like a great film! All my guys love sport-related films and I love stories of hope, so this one should be great for our family movie night!