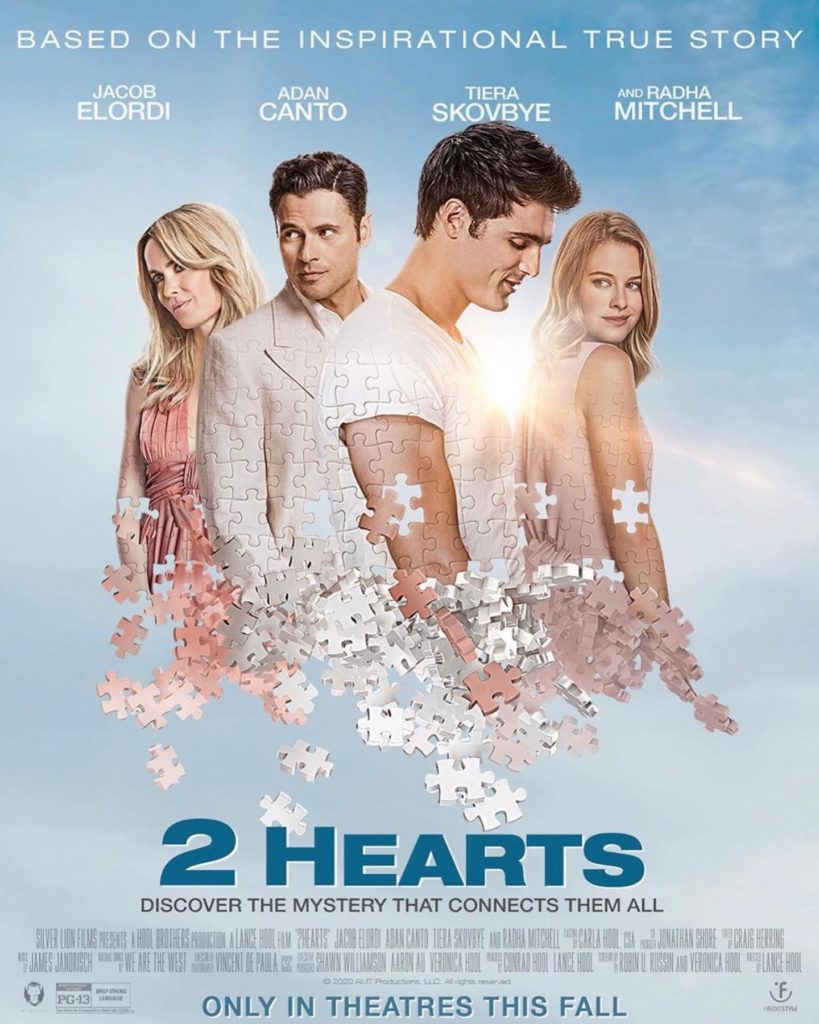 2 Hearts Film – Based on a True Story
#2HeartsL3 #TigerStrypesBlog
I was finally able to watch the 2 Hearts movie, and it was pretty good.  I thought it was going to be a Christian movie, but when there was some eye-popping words and pre-martial relations, I was a bit thrown off.  Come to find out it wasn’t, so at least it had that reason.  I still wish movies would eliminate bad language period, as it’s so unnecessary.  The relationship, I guess, is now so normal that it doesn’t bother most who watch it.

The story of the movie was great.  It kind of went back and forth between the two main characters.  Sometimes you had to pause it to get back on track with where they were, etc.  At the end though, it all comes together and makes sense.  I love how it talked about being an organ donor, which I think is so important.  We get a new body in heaven, and don’t need this shell anymore.  Like I’ve told my husband, doctors and our lawyer…sign me up…my parts are not the greatest, but to someone they might mean extended life, and I’m all for that.

The actors in the movie were great.  Worked really well together, and had a chemistry.  Made you feel like you knew them, and could understand their story.  I was impressed with that part.  All in all it was a good movie.  Not one I would probably show the younger crowd, but definitely one for an older family, that allows you to talk about things after it’s over.  That part was great!  This movie will only be in theaters on October 16, 2020.  That is a Friday, so mark your calendars!! 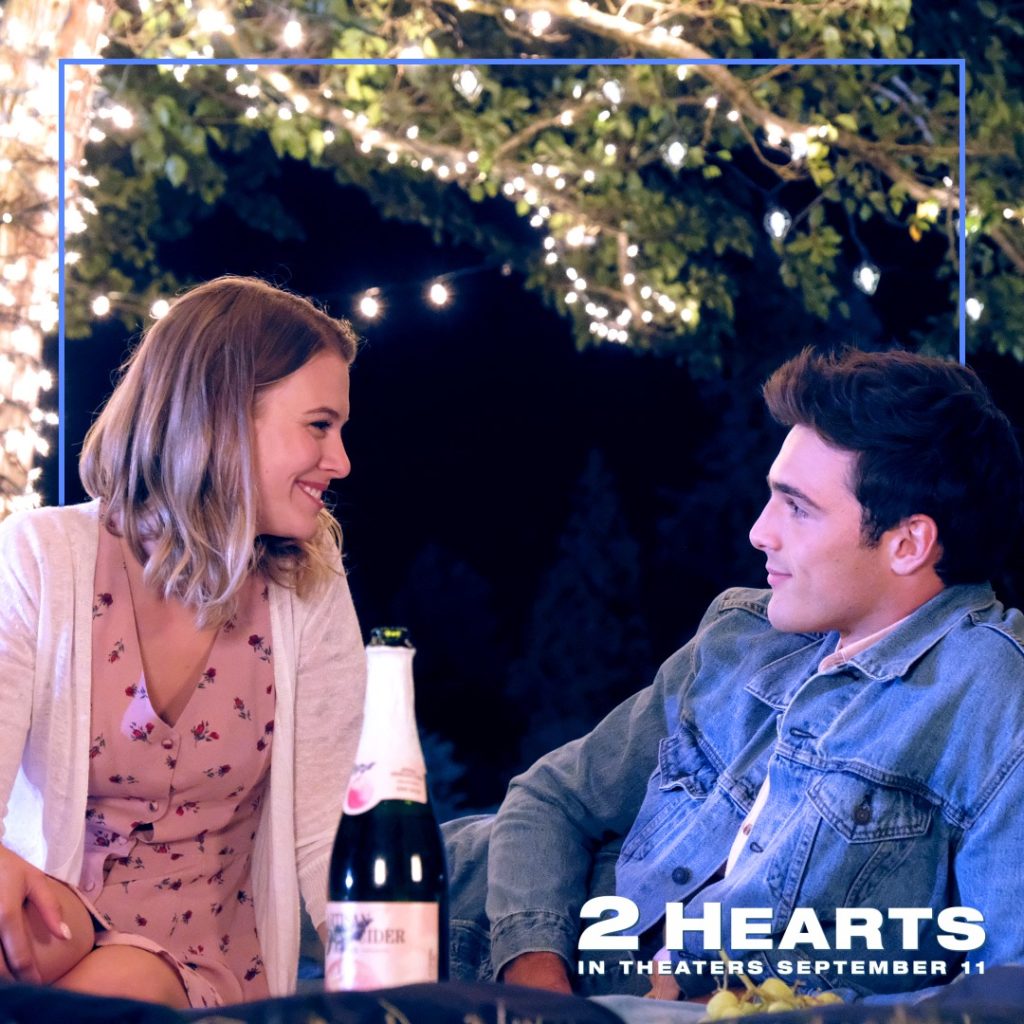 About the 2 Hearts Movie:

For two couples the future unfolds in different decades and different places, but a hidden connection will bring them together in a way no one could have predicted. Based on an inspirational true story, 2 Hearts is a romantic journey that celebrates life, love and generosity of spirit, and challenges audiences to believe miracles are possible.

Charismatic young Australian actor Jacob Elordi (“Euphoria,” “The Kissing Booth“) plays Chris, a college freshman whose love for a spirited classmate played by Tiera Skovbye (“Riverdale,” “Once Upon a Time”) helps him find the purpose he has been searching for.

Though they were never meant to meet, fate has something entirely unexpected in store for both couples that dramatically changes the course of their lives.

2 Hearts is directed by Lance Hool from a screenplay by Veronica Hool and Robin U. Russin (On Deadly Ground). The film is produced by Conrad Hool (The Air Up There, Flipper) and Lance Hool (Missing in Action, Man on Fire). Director of photography is Vincent De Paula (“ReBoot: The Guardian Code,” Don’t Let Him In). Executive producers are Aaron Au (“Firefly Lane,” Elsewhere), Shawn Williamson (The Company You Keep, “The Good Doctor”) and Veronica Hool.

Enter to Win Tickets to 2 Hearts:

The Cast of 2 Hearts:

JACOB ELORDI is already known for appearing in horror film The Mortuary Collection and romantic comedy The Kissing Booth.  His star truly ascended with the overnight success of the award-winning HBO series “Euphoria.” Elordi also co-starred with Guy Pearce, Kylie Minogue and Radha Mitchell in the ’70s-set dramedy Swinging Safari. Up next for the young actor are Deep Water, starring Ana de Armas and Ben Affleck; The Very Excellent Mr. Dundee, with Paul Hogan; and The Kissing Booth 2. Born in Brisbane, Australia, Elordi attended St Joseph’s Nudgee College, where he developed a keen interest in drama. He started his career by acting in indie shorts Carpe Liam (2015) and Max and Iosefa (2016), for which he also wrote the script.

TIERA SKOVBYE is best known for her leading role on the Canadian series “Nurses,” a memorable supporting turn in “Dirty John,” alongside Eric Bana and Connie Britton, and playing Polly Cooper on “Riverdale.”  This vivacious young Vancouverite comes from a Scandinavian background, with extended family in Sweden and Denmark. She started acting at age 7 after being spotted by an agent at the Vancouver International Children’s Festival. After several commercial bookings and work as a fashion model, Skovbye landed her first lead role in a Warner Home Video series called “McKids Adventures.”

This led to parts in hit shows “Supernatural,” “Wingin’ It,” “R.L. Stine’s The Haunting Hour” and “Spooksville.” Skovbye booked her first lead in the CBC pilot “Wishing Well” before starring in Lifetime’s vampire telefilm “Forever 16” and appearing in key episodes of the ABC series “Once Upon a Time.”

ADAN CANTO starred on ABC’s hit political drama “Designated Survivor,” opposite Kiefer Sutherland. The young, Mexican-born actor also appeared on Netflix’s critically acclaimed series “Narcos,” (cast by Carla Hool) alongside Wagner Moura. He was seen in “Blood & Oil” and “Mixology,” on ABC, and “The Following,” for Fox. On the big screen, Canto got his start in the Spanish-language thriller Sin Memoria and was also featured in X-Men: Days of Future Past. This versatile performer wrote, directed and starred in the 2014 short Before Tomorrow, about a man’s somber awakening after a tragedy. Off screen, Canto is an impressive musical talent, as both singer and guitarist.

RADHA MITCHELL is a highly regarded leading lady and versatile talent known for starring in such memorable films as Pitch Black, Silent Hill, Man on Fire (produced by Lance and Conrad Hool) and Rogue. She shared in a Screen Actors Guild (SAG) Award nomination (Best Ensemble Cast) for Finding Neverland. Most recently she played the title role in the festival favorite Celeste (2018). Mitchell will next be seen in Dreamkatcher, a horror film co-starring Henry Thomas and Lin Shaye, and actioner Run Hide Fight, with Thomas Jane.

A native of Melbourne, Mitchell began acting when still in high school and made her professional debut in 1994, on the long-running Australian soap opera “Neighbours.” Her film debut in Love and Other Catastrophes led to an international breakthrough in High Art, director Lisa Cholodenko’s feature debut. She went on to star in such films as Nobody’s Baby, Melinda and Melinda, Surrogates and London Has Fallen.

For sure. How many positives do they say to outweigh the negative. Dang, I need to watch more of these type of movies! 🙂

I enjoy movies where the main characters have chemistry so you believe in them and the story.

This movie intrigues me.