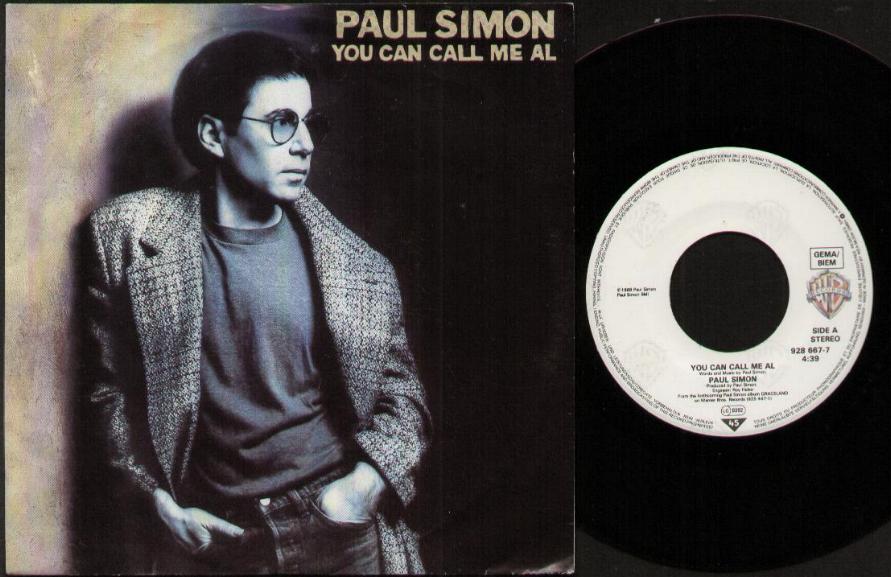 So to get on with this “Things That Brings Back Memories” blog post for this week, I’m going to pick “You Can Call Me Al” by Paul Simon, which was released in 1986.  If you don’t know about the song that I’m talking about, here it is:

The song “You Can Call Me Al” was one that had a lot of air play, and than got even more popular after the video ran.  We all loved seeing Chevy Chase “singing” the song!!  The video was really a simple one, just in a little corner…but wow, it really left an impression. Did you ever listen to this song?  What did you think of it?

“You Can Call Me Al” is a song by the American singer-songwriter Paul Simon. It was the lead single from his seventh studio album, Graceland (1986), released on Warner Bros. Records. Written by Simon, its lyrics follow an individual seemingly experiencing a midlife crisis. Its lyrics were partially inspired by Simon’s trip to South Africa and inexperience with its culture.  Released in September 1986, “You Can Call Me Al” became Simon’s biggest solo hit, reaching the top five in seven countries.

The names in the song came from an incident at a party that Simon went to with his then-wife Peggy Harper. French composer and conductor Pierre Boulez, who was attending the same party, mistakenly referred to Paul as “Al” and to Peggy as “Betty”, inspiring Simon to write a song.

“You Can Call Me Al” was recorded entirely at the Hit Factory in New York City in April 1986; it differs from much of Graceland in this regard, as most songs on the record were recorded in numerous locales worldwide. 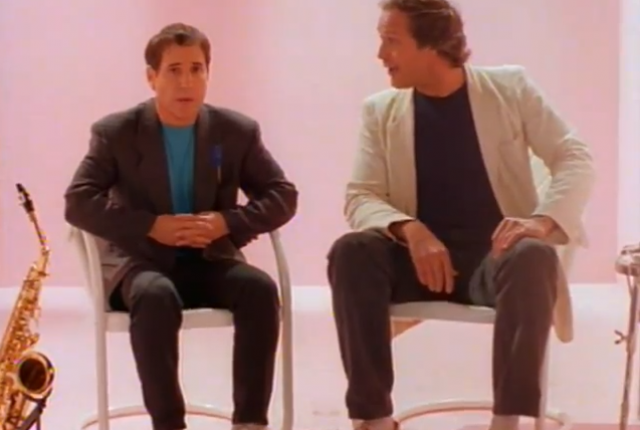 After the song’s completion, it was mixed at the Hit Factory alongside the rest of Graceland, at an average of two days per song.  Simon’s vocals on the song are rather quick-paced, which made them difficult to mix over the numerous instruments in the backing track. After much work on the track, Simon’s long-time engineer Roy Halee used tape delays feeding separately into the two audio channels, which miraculously made the vocals clear.

The lyrics can be interpreted as describing a man experiencing a midlife crisis (“Where’s my wife and family? What if I die here? Who’ll be my role model?”). However, as Paul Simon himself explained during the Graceland episode of the Classic Albums documentary series, by the third verse the lyrics move from a generic portrait-like perspective to a personal and autobiographical one, as he describes his journey to South Africa which inspired the entire album.

The song opens simply, with its protagonist wondering aloud why his life is difficult, amid other questions. Simon structured the song’s lyrics in a way that listeners would be given the simplest information first, before getting abstract with his imagery in the song’s third verse: “Because there’s been a structure, those abstract images, they will come down and fall into one of the slots that the mind has already made up about the structure of the song.” 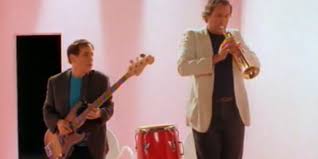 Synthesizer player Rob Mounsey contributed heavily to the track’s arrangement and groove.  The song features a bass run performed by Bakithi Kumalo; the solo is palindromic as only the first half was recorded, and was then played backwards for the second half. The decision to reverse the recording was made by Halee, who noted in a later interview that this type of experimentation was common in order to make the songs more interesting.  The penny whistle solo was performed by jazz musician Morris Goldberg.

Paul Simon did not like the original music video that was made, which was a performance of the song Simon gave during the monologue when he hosted Saturday Night Live in the perspective of a video monitor. A replacement video was conceived partly by Lorne Michaels and directed by Gary Weis, wherein Chevy Chase lip-synced all of Simon’s vocals in an upbeat presentation, with gestures punctuating the lyrics.

The two men enter a pastel pink-walled room, sit down, and shake hands; Simon begins to sing, but stops and looks puzzled when Chase commandeers the vocal line instead. From time to time, Simon steps out of the room to bring in other instruments such as a bass guitar and conga drum for later use. He only sings to provide bass harmony on the “If you’ll be my bodyguard” and “I can call you Betty” phrases during the chorus. Simon plays a penny whistle solo following the second chorus, after which the two men perform a rhythmic dance step in unison during the bridge, with Simon and Chase playing alto saxophone and trumpet, respectively. After the third chorus, Simon plays a conga drum solo, then switches to bass guitar for the fade-out instrumental and dance as the two men exit the room. He maintains a bored expression throughout much of the song, only showing enthusiasm when playing an instrument. 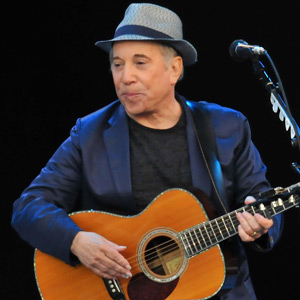 Paul Frederic Simon was born October 13, 1941, and is an American musician, singer-songwriter and actor. Simon’s fame, influence, and commercial success began as part of the duo Simon & Garfunkel, formed in 1964 with musical partner Art Garfunkel. Simon wrote nearly all of the pair’s songs, including three that reached No. 1 on the U.S. singles charts: “The Sound of Silence”, “Mrs. Robinson”, and “Bridge over Troubled Water”.  The duo split up in 1970 at the height of their popularity, and Simon began a successful solo career as a guitarist and singer-songwriter, recording three highly acclaimed albums over the next five years.  In 1986, he released Graceland, an album inspired by South African township music. Simon also wrote and starred in the film One-Trick Pony (1980) and co-wrote the Broadway musical The Capeman (1998) with the poet Derek Walcott.

Simon has earned twelve Grammys for his solo and collaborative work, including a Lifetime Achievement Award.  In 2001, he was inducted into the Rock and Roll Hall of Fame and in 2006 was selected as one of the “100 People Who Shaped the World” by Time magazine.  In 2011, Rolling Stone magazine named Simon as one of the 100 Greatest Guitarists.  In 2015 he was named as one of The 100 Greatest Songwriters by Rolling Stone Magazine.  Among many other honors, Simon was the first recipient of the Library of Congress’s Gershwin Prize for Popular Song in 2007.  In 1986, Simon was awarded an Honorary Doctor of Music degree from Berklee College of Music, where he currently serves on the Board of Trustees. 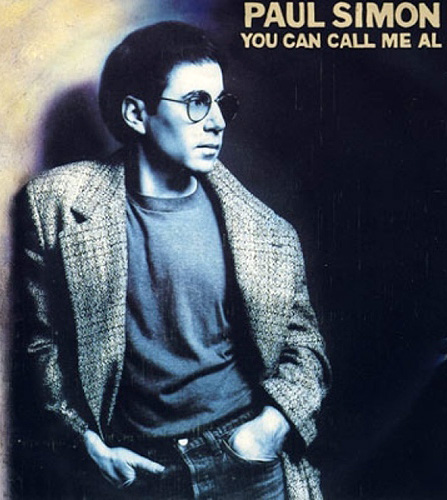 Oh, my goodness did you just take me down memory lane with this song. I use to listen to it a lot in my Dad’s car and at his house. I love how music can take us to another place and time. Music is a big part of my life too.

Isn’t it something how music can just take you places? Living those memories in our heads usually brings a smile! 🙂

I grew up listening to Simon (and Garfunkel). I have so many great memories of my mom blasting her records. Thank you for sharing at #MommyMeetUpMondays!

I still remember when my son asked me what a record was! 😛 The music lives on, though!

I love these posts. It’s amazing how songs can call up memories, no matter how much time has passed!

Thank you for sharing with us at #MommyMeetupMondays!

I guess back before the internet, things lasted a little longer, huh? Now songs come and go and you forget about them in a week! 🙂