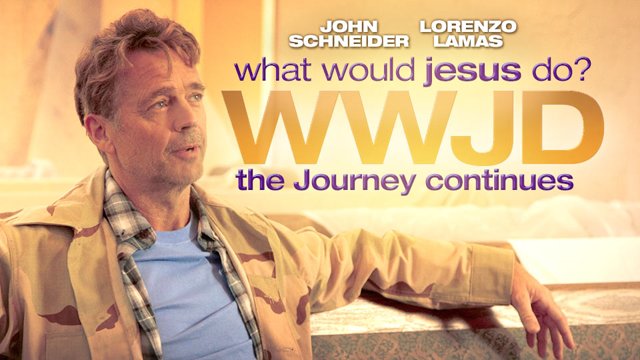 What Would Jesus Do? (WWJD)
…The Journey Continues
(DVD Review & Giveaway)

I received the “WWJD? The Journey Continues” movie from Family Christian to watch and give my review. When you start watching it, it goes kind of slow. You’re really not sure what’s happening, but after you get into the story, you realize what it’s all about. The story, or stories that happen throughout the movie are some that happen often in our world today. I loved seeing how just “normal” people can make such a big difference in the world.

You go through the journey of multiple characters, who just like in real life, intertwine in some way or another. Seeing some boys being pretty bad kids and dealing with a Dad in prison is something that I’ve heard from even people I know of their life that they have to learn to live with. Sometimes, not in the right ways.

It was great to see the different scenarios played out and decisions being made. Just like the characters in the movie, there are times in your life when people you don’t really know, can say just a few words and teach you so much. We just need to learn when to listen! 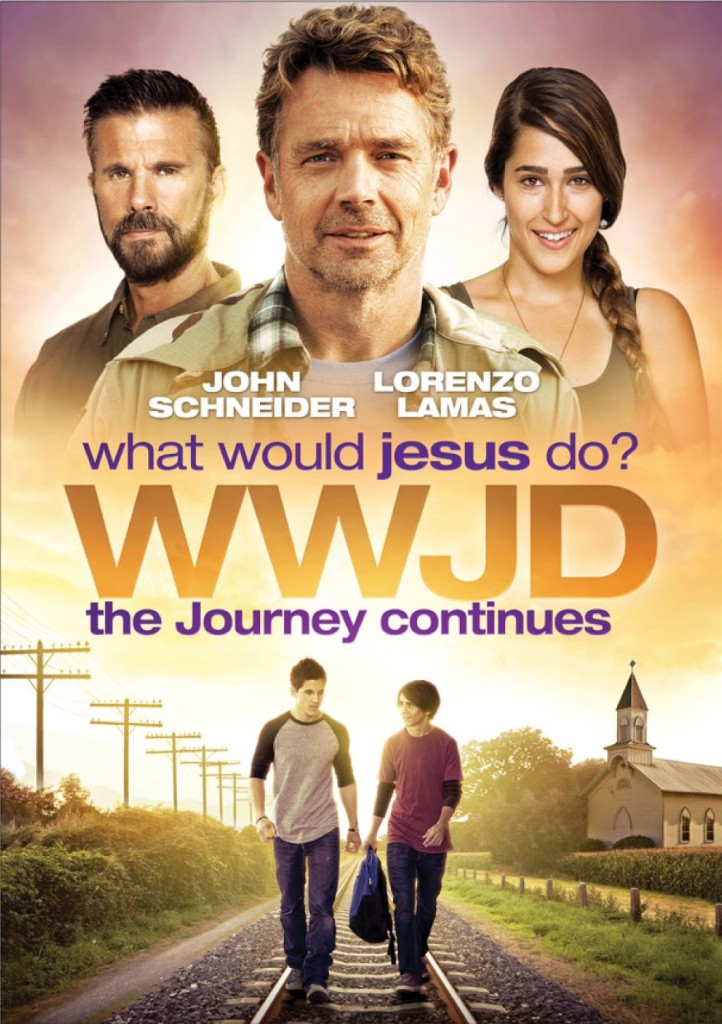 Bound by a promise he made to his mother on her deathbed, a pastor seeks to lead his wayward ex-con brother to Christ as they work together to renovate a dilapidated church. But when a desperate man robs the church at gunpoint, one brother’s sacrifice sets events into motion that lead the pastor, the gunman, and the community on an improbable journey of faith and redemption.

Coming to DVD on March 31st is “WWJD: The Journey Continues.” The movie features John Schneider, Lorenzo Lamas, Mike C. Manning, Peter Sebastian Wrobell, and Joseph Nasser. It will be directed by Gabriel Sabloff and produced by Jack Nasser.

John Richard Schneider who plays “The Drifter” in the movie, was born April 8, 1960, in Mt. Kisco, New York. His parents divorced when he was two. John began acting at the age of eight, and

was in many plays in New York. He and his mother moved to Atlanta, Georgia, when he was fourteen. He got involved in the local theater and was in many local productions. He had a small part in Smokey and the Bandit (1977) starring Burt Reynolds. His big break came when he won the role of Bo Duke on The Dukes of Hazzard (1979) on CBS from 1979-1985. He auditioned for the role pretending he was a genuine country boy. He had a weeks growth of beard and held a beer can claiming he was from Snellville, Georgia. He later became a very successful country singer and had several hit songs including “I’ve Been Around Enough To Know” and “Country Girls.” He has since opened Faith Works Productions in San Antonio, Texas. He also appears in Dr. Quinn, Medicine Woman (1993) as Daniel Simon/Red McCall.

Lorenzo Lamas who plays Jack in the movie, is the son of Arlene Dahl and Fernando Lamas – was raised in Pacific Palisades, California In 1968 his

family moved to New York. He attended private school, graduating from Admiral Farragut Academy in 1975. He then moved back to California. With encouragement from his father, he enrolled in Tony Barr’s Film Actors Workshop and began his career with a small role in a television show in 1976. He also began to study karate and tae kwon do in 1979. He has starred in five television series and in over fifty movies. He is most known for his roles on television, notably as Lance Cumson on CBS’ Falcon Crest and Reno Raines in the syndicated hit show Renegade. Lorenzo also sustained a professional racing career while working successfully as a TV and Film actor in the 80’s and 90’s. He acts on stage and has a cabaret show that he tours with across the country. Some of the roles he has played onstage include the king in the musical The King and I as well as Zach in the musical A Chorus Line. He is an avid motorcyclist for over thirty years and has participated in the Love Ride, to benefit MDA and various charities since its inception in 1983. He is also on the board of directors. Lorenzo is a commercial helicopter and airplane pilot and he often flies disadvantaged children to summer camps and people too sick or financially challenged to travel normally on domestic flights. He just recently received his certification to become a helicopter flight instructor. In 2009, Lorenzo met his wife Shawna Craig who he asked to marry just three short months later. They are still happily married.

Raquel Elizabeth Ames who plays Frances in the movie, was born and raised in a little desert town area in Southern California called Imperial Valley.

The youngest of 5 siblings. At a young age Raquel Elizabeth was always involved in the Creative Arts, Music, Acting, Dance, Cheer. She was also a vocalist In high school, and sang with now Jazz Artist “Walter Beasley”. After graduating and becoming lead singer of a local garage band (1st place at the California Mid-Winder Fair), Raquel Elizabeth then decided to move to the Greater Los Angeles area to pursue her dreams of Acting. She then had an unexpected visitor. Her daughter was born. She then became a single mom deciding to put her career on hold until her daughter grew up. Now, among the joys, trails and tribulations of life, Indie Actress Raquel Elizabeth Ames has been blessed with opportunities to have worked in a variety of Indie Films, such as Hardflip Starring John Schneider (Smallville) & Randy Wayne, (The Lying Game), Resurrection Mary, Starring Kevin G. Schmidt (The Young & the Restless) & Sally Kirkland (Private Benjamin), Walmart Commercial (National) both Spring and Holiday Seasons, Mission Federal Credit Union (Regional) & San Diego SDG& E (Local San Diego), TV Show Desire: Table for three (Fox TV) and La Corte de Familia (Telemundo TV). She has also recorded a variety of Commercials Jingles with Holly Farms, Nabisco and Crisco Oil, as well as Print Modeling with Companies such as Disney, Kaiser Permenente, Honda, State Farm Insurance and a variety of Industrials (Training Videos) for the Border Patrol, Police and Military. Among her Acting Raquel Elizabeth enjoys working with Shelter Animals, Photography, Music, & Writing. She has also just recently booked a Supporting Role in the Indie Feature “China White” as an Interrogations Agent filming in New York & New Jersey.

Mike Manning was born in Ft. Lauderdale, Florida and growing up in Thorton, Colorado, Manning has been volunteering since the age of 8. While in

elementary school, he helped put together care packages for kids in need from under-served countries. It was then he felt compelled to give back and has been doing so ever since. In high school he was part of Positive PE, a program that helped mentally challenged kids with physical education. He is now an official ambassador for Boo 2 Bullying along with actress Cassie Scerbo, and a contributor to the My Life My Power campaign in schools. Mike is a mentor and actor on behalf of the Young Storytellers Foundation, whose mission is to inspire children to discover the power of their own voice through individuals from the entertainment industry stepping into classrooms to work with students. After studying business and acting at the University of Northern Colorado and International Business at the University of Monterrey, Mexico he moved to Washington D.C. to make a difference with philanthropy. Mike was active with Energy Action Coalition and the Human Rights Campaign. For years, Mike has loved exploring the world. His adventures would eventually lead to his discovery of a youth orphanage in Tijuana where he continues to travel to and volunteer. Some of his favorite memories include skiing the Swiss Alps, zip lining in Costa Rica and dining in Paris, France. He currently resides in Los Angeles, CA.

Enter to win one:
a Rafflecopter giveaway

If you don’t want to wait, click below to buy one: 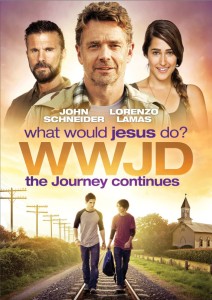 I, Jamie Tomkins, own and operate TigerStrypes Blog located at https://www.tigerstrypes.com. From time to time you’ll hear about my real life experiences with products and/or services from companies and individuals. Let it be known that I have no affiliation with these said companies, and have not received compensation for reviewing their service/product. The service/product was given to me by the company or any agents of the company. The review that I give regarding the product/service is based off my own personal experience, I do not guarantee that your experience will be the same.

Yes I have. I prayed alot. You can choose to show love, forgive and have lots of patience or you can just choose not to be involved etc. I chose love. God is a God of second chances.

Wow, I was getting teary eyed just watching the previews. I could only imagine how good the actual film is.

Sounds like a great movie. I look forward to seeing it.

It is a great one Tracy – thanks for stopping by!

Yes I have and yes I did! None of my other friends stayed, but I did. I’m so glad I chose helped a friend who did not realize just how much she needed help. This looks like a wonderful movie I’d like to see. Thanks for the chance to win it.

Proud of you Linda. In today’s world, it seems so many are scared to stay. We all need to take a stand at some point! 🙂

[…] *I was not financially compensated for this post. I received a sample for review purposes. The opinions are completely my …read more       […]

This sounds like a great DVD to pick up. I always like things that are good for the entire family.

It is a good one, Daisy – and like you said, it’s important to watch together and not have to worry as a parent! 🙂