I received a new DVD called “When Calls the Heart – Second Chances” movie from Elliott with Edify Media, Inc. and was asked to watch the movie and post a review on my blog about it.  I had already seen the the other “When Calls The Heart” movies before this, and love them, you can find my review on the first one here, the 2nd one here,  the 3rd one here, and the last one here.

I am so in love with this movie and the series, in general!  Every movie that comes out and I watch it, the story is either great being continued, or just by itself.  It’s also great to be able to watch it with my husband and our son and not worry about what is in the movie, or what is being said and have the story be one that we love to follow and see how it ends.  My son was even talking about things last night after we watched it and for a 13 year old to enjoy it means A LOT!!

The story was great, and I’m now at the edge of my seat wanting to know what will happen next.  These are some of those movies that just make you want to find the town that they are based on and visit it to meet the people and tell them how great their story is and how much you are enjoying the movies.  Michael Landon, Jr. is doing an amazing job keeping something that is based on older times to feel current and something we can mesh with and understand what’s going on.  I absolutely love them.

When Calls The Heart – “Second Chances” 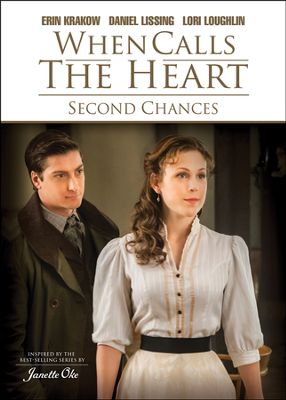 Nashville , Tennessee-  When Calls the Heart, Produced and directed by Michael Landon Jr. and inspired by the best-selling books by Janette Oke, tells the story of Elizabeth Thatcher (Erin Krakow), a young high society woman, working as a teacher in a prairie town in the Western Frontier. When a group of bachelor minors come to help reopen the mine, the local Mounty. Jack Thorton (Daniel Lissing), finds himself in competition for Elizabeth’s affections. When items start disappearing from the town, Jack is immediately suspicious that his rival might also be a thief. Also stars Lori Loughlin as Abigail Stanton, a widow and mother whose husband, along with a dozen other miners, was killed in an explosion at the local mine.

When Calls the Heart- “Second Chances” is a feature length film from television series. The When Calls the Heart television series debuted on the Hallmark Channel to more than 3 million viewers, making it the No. 2 for the night on all of cable for the primary telecast at 9 p.m and No. 3 overall in households. Distributed by Word Entertainment, the DVD is now able to be purchased in Christian Retail.

Synopsis:  After Elizabeth raves about her baking, Abigail is inspired to re-open Coal Valley’s dilapidated and abandoned cafe. But when she approaches Mr. Gowen about purchasing the property, Abigail learns her dream of pursuing a new purpose in life will come at a price – Gowen wants her row home in exchange, leaving Abigail a week to decide if she can make that sacrifice. Meanwhile, in the wake of Elizabeth’s brief romance with the dishonest Billy Hamilton, Jack and Elizabeth remain at odds. Making matters worse, Jack accidentally insults her as he fumbles his attempt to confess his growing feelings. Elizabeth becomes eager to help one of her older students, Bo Grady, learn how to read. After giving Bo an intelligence test, Elizabeth discovers that he is very intelligent, but suffers from dyslexia. Elizabeth urges Bo’s parents, Matilda and Carl, to let her give Bo special reading lessons. Carl, however, is adamant that Bo joins him, working in the mine. Elizabeth refuses to give up on Bo’s future and comes up with a plan to get through to both of the Grady men, while Jack finally finds the right way to open up to her about their rocky relationship in hopes of starting over.

Brian Bird- Writer/Producer : Brian Bird is co-founder with partner Michael Landon, Jr., of Believe Pictures, a film and television production company. He was co-executive producer and writer on the successful television series, Touched by an Angel. Adding to Brian’s success, he had also written and produced episodes of Evening Shade, Step by Step and The Family Man. Most recently, Bird wrote and produced Gametime, a two-hour television pilot for NBC, The Shunning, inspired by the novel by best-selling author Beverly Lewis, for the Hallmark Channel, and Not Easily Broken, adapted from the novel by T.D. Jakes and released theatrically by Sony/TriStar.

"When Calls The Heart - Change of Heart" - Tiger Strypes Blog

I think we have all hoped for a second chance. For me it is a relationship with a relative that has had it’s ups and downs, we’re still working on it!

Hmmm … second chance? Not sure about that. BUT, I love the look of this movie, and love that it’s family friendly.

What do you mean about not being sure about it Susan?

Thank you for sharing! I’ll look into this. Thanks!

That’s very cool to have a movie series that continues on to look forward to watching. It’s so much fun when you find something like this that you want to watch over and over again.

After i suffered a loss of a pregnancy, I hoped for a 2nd chance with plenty of prayer.

I’ve come to love anything that Michael Landon, Jr. has his hands in. Second chances are great, I’ve gotten one before but it so did not turn out the way I had hoped. Which was actually for the better.