I received a new DVD called “When Calls the Heart – Change of Heart” movie from Elliott with Edify Media, Inc. and was asked to watch the movie and post a review on my blog about it.  I had already seen the the other “When Calls The Heart” movies before this, and love them, you can find my reviews on the others here:

My family so loves with this series.  All of the stories are great and it’s kind of like watching a series on TV (which is what it’s from 🙂 ), when it’s over, you just cannot wait for the next one to see how the story goes.  This one left you with a look on your face, like you think you know what’s going to happen, but aren’t sure.  The “Change of Heart” movie had a lot of action and suspense and even a new character that comes in that makes you wonder how city-folk can survive in the country – you’ll understand when you watch it.

This is such a great series.  I really love every single one of these movies and will definitely keep them to share with my family and others that come over and we want something wholesome and good to show in our home.  There aren’t many movies in the world today like that, and we are so thankful to Michael Landon Jr. for bringing back television that you are proud to watch and share with your kids.  It is such a blessing to not have to keep your hand on the remote control and worry about when you’re going to need to mute something or fast forward…you parents know what that’s about, huh?So now I’m writing this and CANNOT WAIT for the next movie to come out – I want to know if that good “Mounty” will go against his past outlook on life and finally drop to his knee!! 🙂

When Calls The Heart – “Change of Heart” 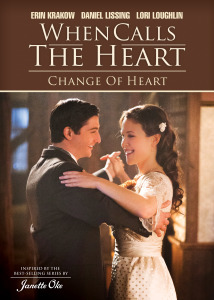 Nashville , Tennessee – When Calls the Heart, Produced and directed by Michael Landon Jr. and inspired by the best-selling books by Janette Oke, tells the story of Elizabeth Thatcher (Erin Krakow), a young woman of privilege, working as a teacher in a prairie town in the Western Frontier. The local Mounty Jack Thornton (Daniel Lissing), has began courting the high society teacher, but new orders have taken him away from the town, Abigail Stanton (Lori Loughlin) has trouble of her own, their forced to confront the most powerful man in town in a battle that may ruin her deceased husband’s reputation.

Synopsis – Jack finally gets Elizabeth to agree to join him for a dinner date just as Elizabeth’s younger sister, JULIE THATCHER, arrives in Coal Valley, surprising Elizabeth. Julie is accompanied by Mountie PATRICK O’REILLY, the man who has been sent to inform Jack of his new posting, and become the new Constable of Coal Valley. Jack had already forgotten that he sent in a request to transfer the week he arrived in Coal Valley, and the news takes him by surprise.

"When Calls The Heart - Rules of Engagement" - TigerStrypes

I think i second guess my desicions a lot. It helps me to talk to someone else about them.

I have been looking for something new to watch!

I have never watched this show but I will now.

The only thing significant in my life that I can think of right now that I had a change of heart on was my major when I was in college. I was convinced that I was going to become an accountant but then realized all that number crunching really was not for me. I love people and would ultimately want to work in PR for a company. Just another reason why I love blogging 🙂 I love people!

Sounds like a series I can kill some time on!