For this “Things That Bring Back Memories” post, I am going to change this up a bit.  I usually stick to TV, music and film, but figured that there are a lot of other things that bring back memories for many of us, so it would be fun to look at them to.  The thing I’m going to pick today is the old favorite hangout of Time Out Arcade from the 70’s and 80’s. 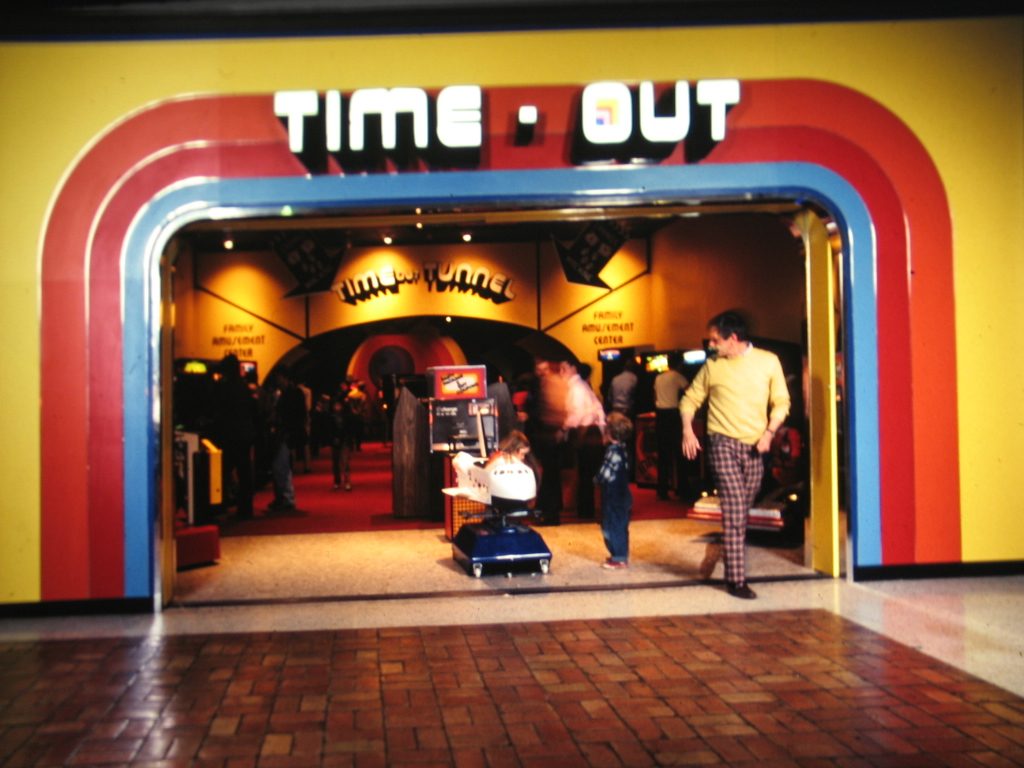 Time Out Arcade was a place in the mall, that back in the day was the best babysitter EVER!! We would be able to get a bunch of quarters and go enjoy the fun, while Mom was out shopping.  It’s sad that the old-school video games aren’t really around much anymore.  I know there are some at our local go kart track, but they are usually always broken. 🙁

I sure wish the kids of today could have a place like this, instead of just the Xbox or Wii.  These were the days of rooting each other on, and being so proud to still see your initials grace the screen of your favorite game.

For those that don’t remember it, here’s some info on this great place from another state:

Time Out was definitely a fun hangout spot.  Great place to meet friends and just enjoy some fun times during the day  Did you ever go there, or hear about it from someone else?  What did you think of it?

More Info on Time Out: 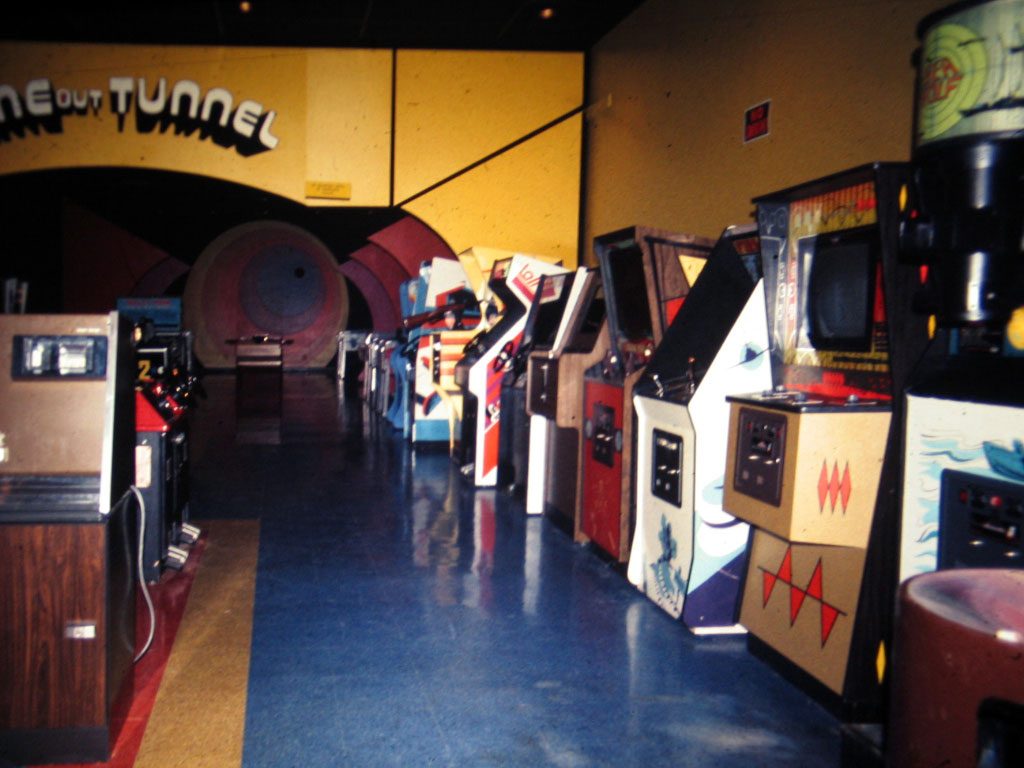 Time-Out Amusement Center was started by an entrepreneur named Tico Bonomo. Tico was a candy manufacturer and the owner of Bonomo’s Turkish Taffy fame, one of the largest hard candy manufacturers on the East Coast. In 1970 Tico sold the upstate New York taffy company to Tootsie Roll, and he began looking for another commercial venture to start up.

In the late 1960’s the idea of a mall arcade as we know it today didn’t exist yet. Video games didn’t exist either. Primitive coin-operated electro-mechanical games were just beginning to creep into retail stores on the eastern seaboard. These primitive games were purely mechanical machines that worked via motors, relays, and projectors. But seeing the nascent electro-mechanical games beginning to accumulate in various retail stores, Tico excitedly realized that an entire store full of coin-operated games in a shopping mall could perhaps be a successful business and something that hadn’t been done before.

Nobody could predict what was to happen next, but Tico’s timing was perfect, and he and his small arcade chain were perfectly positioned for the explosion that was about the happen. In 1972, Pong hit the scene, and customers flooded into Tico’s Time-Out Amusement Centers and unleashed a tidal wave of quarters that nobody could have foreseen. Tico was in the exactly right place at exactly the right time.

Riding the overwhelming popularity of Pong and the numerous copycat games that followed, by the year 1975 Tico had expanded his coin-op empire to a dozen locations. By 1978, there were twenty locations, and it wasn’t over yet. 1978 was the year Space Invaders hit the US, and Tico and his quickly growing chain of arcades rode a second huge wave of expansion and growth triggered by the popularity of Space Invaders.

Not only was the video game industry exploding, shopping mall construction was also going through a huge period of expansion. For Tico and his Time-Out chain, this created nothing less than a Perfect Storm of opportunity. The “Mall Arcade” was a sensation. New malls were opening everywhere, and each new mall would open another chance for Tico to install one of his successful arcade centers. The explosion of growth on several fronts drove the video game manufacturers, all competing for the customer’s quarters, to create more sophisticated and fancier video games, which in turn created a vicious cycle driving the growth of the Mall Arcade.

Working at the Sunrise Mall Time-Out in 1981 in Massapequa, NY, Geoffrey Kovar remembers the employee uniform.  Blue buttoned-down shirt, black slacks, 6-slot coin dispenser on the belt with not one but two quick-release slots to dispense 4 quarters with a single press, faux cloth badge, the works.  He describes a typical early 80’s working environment: The usual layout of the Time Outs I saw had two rear doors, one in each back corner, opening inward, and which generally had a small window or even a peephole (like a front door). In the one I worked at the one on the right led to the setup/repair room. Lots of arcade machines open, in various states of repair, or in crates, and it took up probably 2/3 of the back area. The one on the left led to a short hallway. Two doors from there, one a fire door to the mall hallway, and one to the right, leading to the office/vault. There was a big safe in there with tons of money, and also several secure drawers for each of the people on shift. Usual work drawer was $500, in quarters, except for a bit of paper to make change. First job I ever had to get bonded to work at, and had to take a polygraph test. Oh, and none of this stuff about tokens. We used quarters, baby! And to track the usage of slugs and free games we gave out, there was a bin of quarters painted red (red nail polish, actually) in the office that we dipped into when necessary.”

Over the next few years, the machines got better and flashier, the audience for video games ballooned, and new arcade locations were opening at a furious pace. Every mall had an arcade – sometimes more than one. The industry was at its peak at this point, producing its seminal games like Asteroids, Pacman, Defender, Galaga, Battlezone, Tempest, and other machines that sucked video game players into arcades like a giant ever-expanding whirlpool. Video games and arcades were everywhere, and Time-Out Amusement Center was at the forefront of the industry. 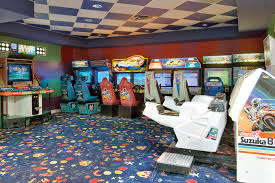 Who remembers the hangout Time Out Arcade from the 80's? Did U ever hang out there? #TTBBM #TigerStrypesBlog Click To Tweet

Some Other Interesting Time Out Facts:

We had an arcade in our mall growing up. I loved it there!

I was never in a Time Out arcade–BUT Nathan’s (in Westchester county, NY) had an arcade in the back room–a very large back room!! We all spent many happy hours playing pinball in there. There were lots of things to do for the younger set as well. They also had video games towards the end. They have since downsized and no longer have that arcade.

They were always fun back in the day – when there was still more trust in the world, for sure.

CJ Across the Avenue

Oh my goodness, this takes me back! What fun times we had at the arcade mall. Ours wasn’t called Time Out, but it might as well have been. Ms. Pac Man was my favorite video game, but we also had an air hockey table that I was the master of. You brought back great memories!

Author
Jamie
Reply to  CJ Across the Avenue

Most of them were just the same – fun times and didn’t cost too much. …well depending on the gamer! 🙂

Oh what memories. We had an arcade full of games in our mall. Our family wasn’t well off by any stretch, therefore, we didn’t travel to the mall often but when we did oh boy. Usually it was the 3 Saturdays in December and my dad would give us some then send us off, we’d come back and he’d give us more. We were so busy we usually didn’t think of the fact that my parents were Christmas shopping for us right in front of our noses.

Your parents were brilliant!! What a great idea. I sure miss those days when you could actually feel comfortable leaving your kids for just a bit. 🙁

I Remember going to the mall for the arcades. We would go to the Montclair Plaza and hang out while mom went shopping. There was an arcade at the Indian Hill Mall (when it was still a decent mall) – my friends and I would ride our bikes there to play Galaga, Pac-Man, Tron, Donkey Kong and many of the other popular games of the time. There was another arcade that we would frequent down in Chino by the EZ-Out Burger on Central Ave. Oh yeah, and don’t forget those games at places like Skateway, Holiday Roller Rink and all… Read more »

Yep, I miss those days of not having to worry so much. Fun times!