For this week’s “Things That Bring Back Memories” post, I am going to pick something in the topic of “TELEVISION” and go with Three’s Company.  This was a show that had you laughing from the beginning.  Jack having to fake his life to just get a place to live, met up with many different funny interactions with the cast mates!  This was a show that I loved watching with my family!!  I love seeing pictures of just the living room on shows today, and knowing exactly what it pertains to – such a fun memory!

Who remember’s what happens after this shot?

For those of you, who are either too young, or just don’t remember it, here’s a video of the Three’s Company intro: 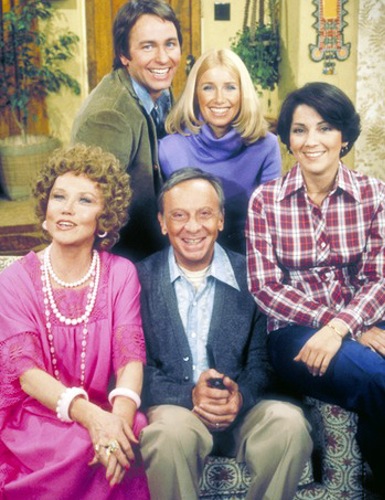 Three’s Company is an American sitcom television series that aired eight seasons on ABC, from March 15, 1977, to September 18, 1984. It is based on the British sitcom Man About the House.

The story revolves around three single roommates: Janet Wood (Joyce DeWitt), Chrissy Snow (Suzanne Somers), and Jack Tripper (John Ritter), who all platonically live together in a Santa Monica, California, apartment building owned by Stanley and Helen Roper. Following Somers’ departure, Jenilee Harrison joined the cast as Cindy Snow, who was soon replaced by Priscilla Barnes as Terri Alden. After the Ropers left the series for their own sitcom, Don Knotts joined the cast as the roommates’ new landlord Ralph Furley.

The show, a comedy of errors, chronicles the escapades and hijinks of the trio’s constant misunderstandings, social lives, and financial struggles, such as keeping the rent current, living arrangements and breakout characters. A top ten hit from 1977 to 1983, the series has remained popular in syndication and through DVD releases.

After crashing a party and finding himself passed out in the bathtub, cooking school student Jack Tripper meets Janet Wood, a florist, and Chrissy Snow, a secretary, in need of a new roommate to replace their departing roommate Eleanor. Having only been able to afford to live at the YMCA, Jack quickly accepts the offer to move in with the duo.

However, due to overbearing landlord Stanley Roper’s intolerance for co-ed living situations, even in a multi-bedroom apartment, Jack is allowed to move in only after Janet tells Mr. Roper that Jack is gay. Although Mrs. Roper figures out Jack’s true sexuality in the second episode, she does not tell her husband, who tolerates but mocks him. Frequently siding with the three roommates instead of her husband, Mrs. Roper’s bond with the roommates grows until the eventual spin-off The Ropers. 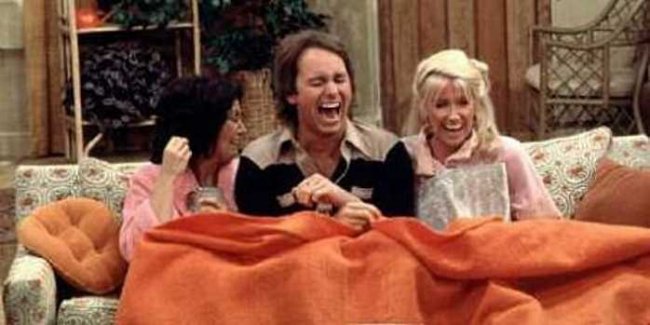 The show was set minutes from the beach in Santa Monica, California, and was filmed primarily using three main sets: the trio’s apartment, their landlord’s apartment, and a neighborhood pub called The Regal Beagle. In later seasons more sets were used, frequently depicting the apartment of Jack’s friend Larry, Angelino’s restaurant, Jack’s Bistro, the hospital where Terri worked, and Janet’s flower shop.

Humor in the show was based on farce, often relying on innuendo and misunderstanding, as well as physical comedy to punctuate the hare-brained schemes the characters would invariably conjure up to get themselves out of situations and dilemmas. Running jokes were frequently based on Jack’s (supposed) sexual orientation, Mr. Roper’s lack of sexual prowess, and Chrissy’s blonde moments. Conflict in the show came from the dysfunctional marriage of the Ropers, Janet’s intolerance for a roommate romance, and later on, Jack’s friendship with Larry and Larry’s abuse thereof. Jack, Janet, and Larry appeared in all eight seasons of the series.

The theme song was composed by Joe Raposo (known for composing for the children’s television shows Sesame Street and The Electric Company), and sung by Ray Charles (not to be confused with the blind R&B musician) and Julia Rinker. 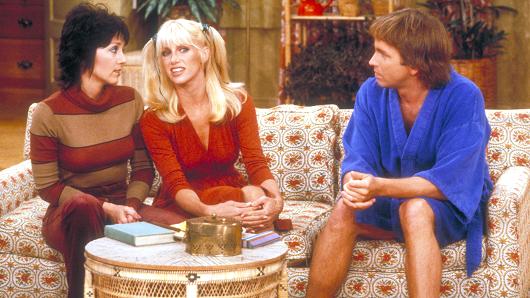 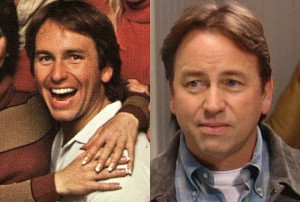 John Ritter (Jack Tripper) was born on September 17, 1948, and passed away on September 11, 2003.  He was an American actor, best known for his role of Jack Tripper in the ABC sitcom Three’s Company, for which he won an Emmy and a Golden Globe Award in 1984; also playing the same role in Three’s a Crowd, he was the son of the late singing cowboy star Tex Ritter and the father of actors Jason Ritter and Tyler Ritter.  Ritter appeared in hundreds of films and television shows/episodes combined (and performed on Broadway), including It (1990), Problem Child (1990), Problem Child 2 (1991) and Bad Santa in 2003 (his final live action film which was dedicated to his memory). Prior to Clifford’s Really Big Movie (posthumously released), Ritter received four Daytime Emmy Award nominations for his voice work on the children’s television series, Clifford the Big Red Dog, in addition to many other awards Ritter was nominated for or won. Don Knotts called Ritter the “greatest physical comedian on the planet”.  Ritter died from an aortic dissection on September 11, 2003. His death occurred shortly after the production of an episode for the second season of 8 Simple Rules.

Joyce DeWitt (Janet Wood) was born the second oldest of four to parents Paul and Norma DeWitt on April 23, 1949 in Wheeling, West Virginia but grew up in Indiana. Joyce began taking acting lessons when she 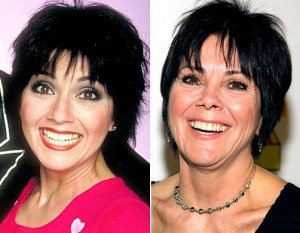 was in high school. Although her father was hardly thrilled at his daughter’s ambition, she persuaded him to let her major in theater in college. DeWitt soon moved to UCLA where she received her master’s degree. After college, she worked as a legal secretary while at the same time going from audition to audition. Months passed before ABC offered her a choice of two comedy pilots but gave her only 24 hours to decide on which. After reading both scripts in a hurry, she chose the one about one guy living with two girls.  She chose well – the other show never sold. She had been in numerous amounts of plays before but became familiar to everyone as the sensible, down-to-earth, football jersey wearing, brunette roommate Janet Wood.  DeWitt became famous and while many celebrities would automatically welcome in the huge amounts of attention, she usually kept to herself and didn’t care too much for publicity. 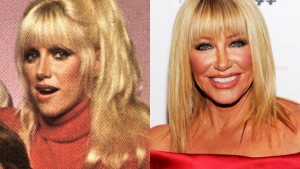 Suzanne Somers (Chrissy Snow) is the third of four children born on October 16, 1946, to Frank and Marion Mahoney. Her father worked loading beer onto boxcars, and her mother was a homemaker. She grew up living in constant fear of being hurt or even killed at the hands of her verbally and physically abusive alcoholic father. She was diagnosed with dyslexia when she was young, and was a poor student. She excelled, however, in the arts and was active in her school’s theater program. She turned to modeling later in San Francisco to support herself and her son.  In 1968, she won a job as a prize model on a game show hosted by her future husband, Alan Hamel, who was married at the time. The two began dating, and she became pregnant while Hamel was still married.  In 1971, her son Bruce was severely injured when he was hit by a car, and the therapist counseling him only charged the struggling Suzanne $1 per week. Suzanne herself also underwent therapy to overcome the problems of her dysfunctional childhood. In the early 1970’s, she landed minor roles in film and TV, and finally won a role on the series Three’s Company (1977), where she modeled her character after Dick Clark’s wife. She married Hamel in 1977. She was fired from the series after she asked for a raise at the beginning of the fifth season. She then headed to Las Vegas, where she performed extensively in the mid-1980’s. In 1986, she began writing her autobiography, “Keeping Secrets”, which was later made into a TV movie. In 1991, Suzanne landed the role of “Carol Foster”, opposite Patrick Duffy, on the TV series Step by Step (1991). Since the end of that show, she has begun co-hosting the series Candid Camera (1992). 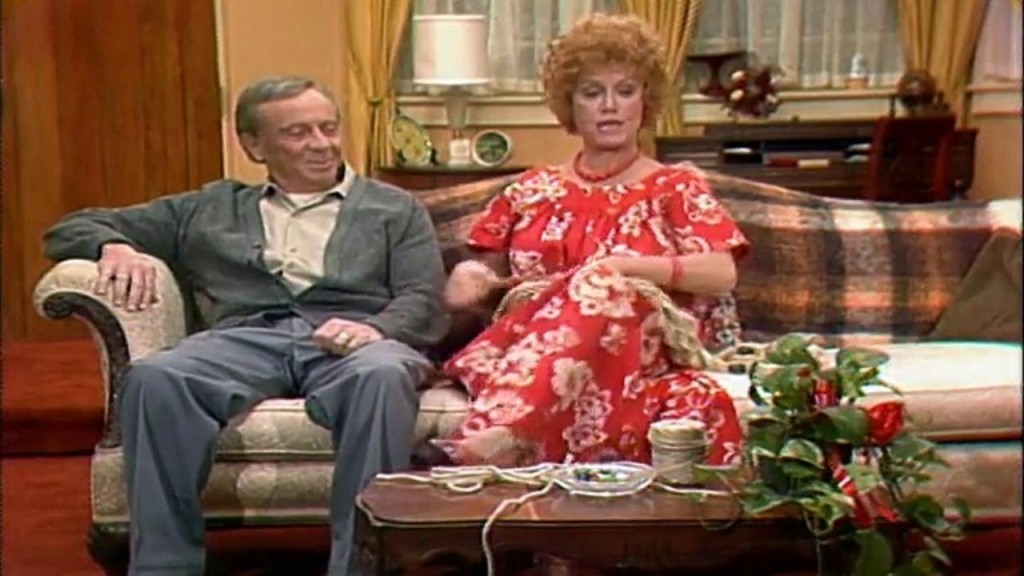 During the earlier seasons’ opening credits, the brunette walking by the beach that causes Jack to fall off his bike is Suzanne Somers in a wig.

In the show’s opening (beginning with the sixth season), a toddler walks up to Joyce DeWitt as she is feeding a goat. The toddler is Jason Ritter (son of John Ritter). This is revealed by DeWitt in a bonus feature of the Season 4 DVD.

During the pilot episode, Jack says: “Well, you know you have to learn to trot before you can gallop… who said that?” and the audience laughs. This was John Ritter’s way of paying homage to his late father, Tex Ritter.

Richard Kline’s role as Larry Dallas was originally meant to be a one-time guest appearance. But the producers enjoyed his chemistry with Ritter that he became a recurring character and eventually a cast member.

At the end of the second episode, first season, Jack says: “Goodnight, John Boy.” This was a direct wink at John Ritter’s former performance on The Waltons (1971) as Reverend Fordwick. 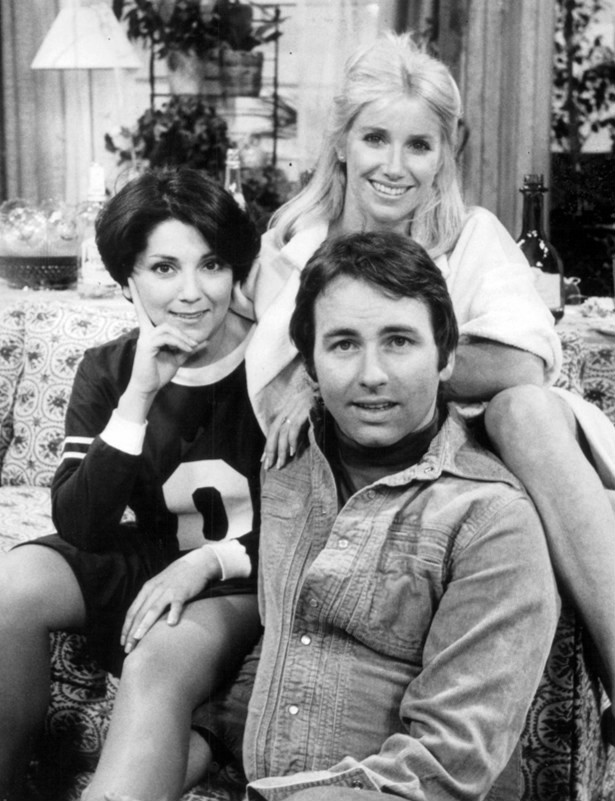 Thank you, I listen to these songs and feel sad with all the time I waste on electronics. I remember when school was easy, no problems, life was good. Sigh.﻿

Oh so true, definitely different times in just a short amount of years. 🙂

Oh my goodness, I remember this show well. I watched it almost every chance I got (which wasn’t often due to my mom’s strict rules). However, it was definitely funny!

HA! Now, that brings back some memories. Good laughs. Thanks for sharing at #HomeMattersParty

What fun memories! I am old enough to remember this on prime time, but my family also watched reruns. Thanks for sharing it! #HomeMattersParty

I really enjoyed reading this! I had no idea that was Suzanne Somers in a wig 🙂 This was one of my favorite shows when I was younger. I think I may have caught it at Nick at Nite. #HomeMattersParty

Thanks Crystal – it was a really popular show, back in the day!

Three’s Company was one of my favorite shows! I loved watching the clip-such great memories! #HomeMattersParty

Isn’t it funny how you know exactly what it is with the first few notes of the intro song? I love memories!

ooooh how I miss John Ritter.. So gifted..:)

Definitely one of the best!

I used to watch this all the time when I was younger. I totally can see John Ritter in his son’s, they look just like him.

I agree – I am so happy that they are continuing his legacy! 🙂

Home Matters Linky Party #86 - In the Kitchen with Stacey

I used to LOVE this show. The gals have aged so well too – I’m so envious!

Isn’t it crazy how some people never seem to get older? I wish I had that “problem”! 🙂

Aww I remember watching re-runs of this with my mom! #HomeMattersParty

It was a great show – always one to make you laugh!