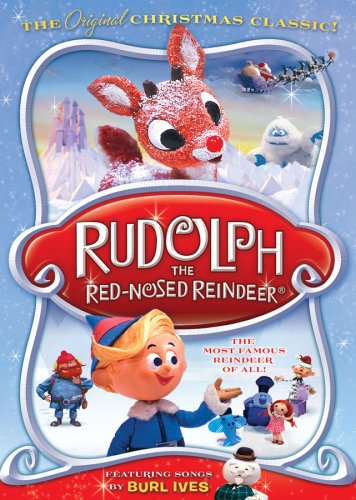 For this week’s “Things That Bring Back Memories” post, I am going to pick something in the topic of “TELEVISION” and go with Rudolph the Red-Nosed Reindeer.  This show first came out in 1964 and has changed a bit over time.  Each and every year, though, it’s one that even being in my 40’s, I still have to watch.  The story is wonderful and it’s perfect to enjoy as a family.

For those of you, who are either too young, or just don’t remember it, here’s a commercial for the Rudolph the Red-Nosed Reindeer show: 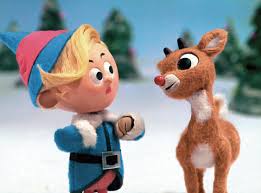 Rudolph the Red-Nosed Reindeer is a 1964 Christmas stop motion animated television special produced by Rankin/Bass Productions and currently distributed by Universal Television. It first aired Sunday, December 6, 1964, on the NBC television network in the United States, and was sponsored by General Electric under the umbrella title of The General Electric Fantasy Hour. The special was based on the Johnny Marks song “Rudolph the Red-Nosed Reindeer” which was itself based on the 1939 poem Rudolph the Red-Nosed Reindeer written by Marks’ brother-in-law, Robert L. May. Since 1972, the special has aired on CBS, with the network unveiling a high-definition, digitally remastered version of the program in 2005. As with A Charlie Brown Christmas and How the Grinch Stole Christmas, Rudolph no longer airs just once annually, but several times during the Christmas and holiday season on CBS. Unlike other specials that also air on several cable channels (including ABC Family), Rudolph only airs on CBS. It has been telecast every year since 1964, making it the longest running Christmas TV special in history. 2014 marked the 50th anniversary of the television special and a series of postage stamps featuring Rudolph was issued by the United States Postal Service on November 6, 2014.

Sam the Snowman narrates the story of Rudolph, a reindeer who is born with a glowing red nose. His father, Santa’s lead reindeer Donner, feels ashamed after Santa Claus tells him that he will not allow Rudolph to be in the sleigh team with his nose (“Jingle Jingle Jingle”). Donner uses a special cover to hide Rudolph’s nose so Donner and his wife can send Rudolph to the Reindeer Games in a year’s time.

A year later, Rudolph is a yearling reindeer who is sent to take part in the Reindeer Games to learn how to fly, with Comet as his coach. Donner still tries to hide the nature of Rudolph’s nose with the cover. This causes Rudolph’s voice to sound as if he had a permanent cold. Despite this, two deer befriend Rudolph. One is a little buck named Fireball, and one unnamed buck is said to be the son of Dasher. The other is a beautiful doe named Clarice, whose affection for Rudolph inspires him to fly higher and more artfully than all of his peers. During some horseplay, Fireball inadvertently pops the cover off of Rudolph’s nose; after seeing his glowing nose, the other young bucks, Fireball included, start ridiculing Rudolph. Comet bans Rudolph from the rest of the games as a result. Clarice is the only reindeer who still likes Rudolph and tries to comfort him (“There’s Always Tomorrow”). However, their musings are interrupted by Clarice’s father, who forbids Clarice from being around Rudolph. 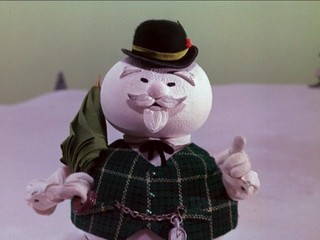 Rudolph runs off into the woods and meets up with Hermey, an elf who had been forced out of his job because he was more interested in dentistry than toy-making. The two bond (“We’re a Couple of Misfits”) after they discover they each have something that makes them unique. After deciding to be “independent together”, they set out but encounter the Abominable Snow Monster aka the Bumble, a carnivorous monster who hates Christmas and feeds on reindeer. The two manage to escape him.

Later, they meet a prospector named Yukon Cornelius, who professes himself as the Greatest Prospector of the North but never finds any of the precious metal (“Silver and Gold”) that he seeks. The trio manages to flee to the Island of Misfit Toys, an island filled by abandoned toys with idiosyncrasies (“The Most Wonderful Day of the Year”). The island is ruled by a winged lion named King Moonracer. Because they are misfits but not toys, King Moonracer allows them to spend one night on his island; the King asks the trio to inform Santa Claus of the toys’ plight and find homes for them in return. As Hermey and Yukon sleep, Rudolph leaves the island on his own, having realized that his nose is a danger to his friends. 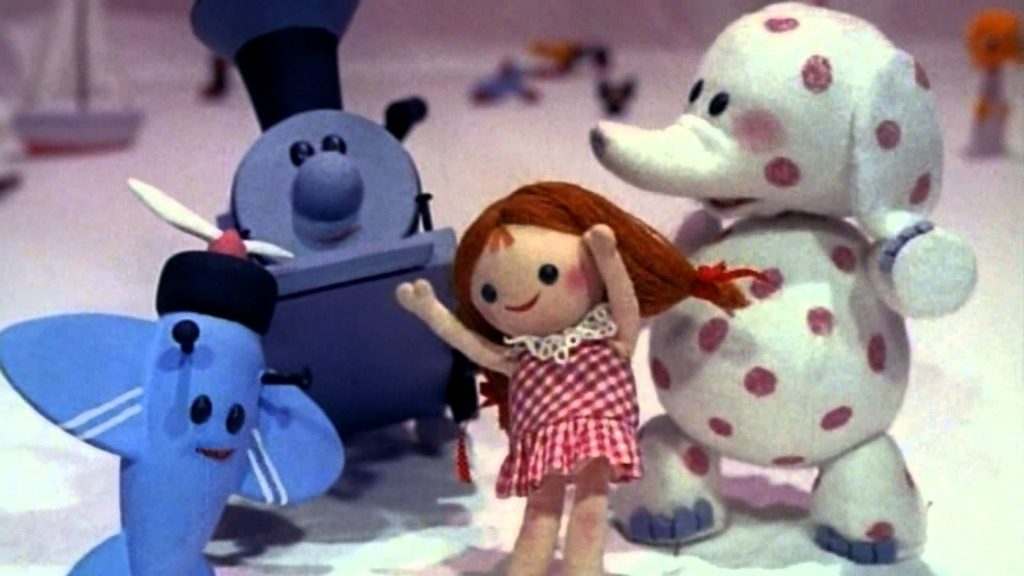 A few months later, Rudolph has grown into a young stag and, still unable to find a place where he is accepted, decides to return home. When he arrives, he discovers his parents are gone. Santa explains that they went looking for Rudolph, and Clarice went with them. Rudolph searches the North Pole and finds his family and Clarice being held captive by the Abominable Snowman. Rudolph attempts to rescue them alone before Hermey and Yukon Cornelius catch up to him, and they try to help. They manage to knock out the Bumble while Hermey removes the monster’s teeth, but Yukon knocks himself, his sled team, and the monster over a cliff when he stands up to the beast. The others return home, where they tell everyone their story. Rudolph and Hermey stop being ridiculed, and the lead elf finally allows Hermey to open a dentist’s office the week after Christmas. Yukon, who survived, makes a grand entrance with the toothless and now-reformed Bumble. Everyone decides to keep the monster around because he can put a silver star on top of Christmas trees without a step-ladder (“A Holly Jolly Christmas”).

Santa comes to the conclusion that the winter storm outside would be too much for his sleigh team to handle, so he decides to cancel the Christmas Eve flight. As he announces the decision, Rudolph’s nose begins to glow brightly, inspiring Santa to offer Rudolph the front position guiding the sleigh; Rudolph happily accepts. Watched on by his parents and Clarice, Rudolph leads the sleigh to the Island of Misfit Toys to collect the toys, after which they are delivered to their respective homes. With Rudolph leading the sleigh, it turns out to be a merry Christmas after all. 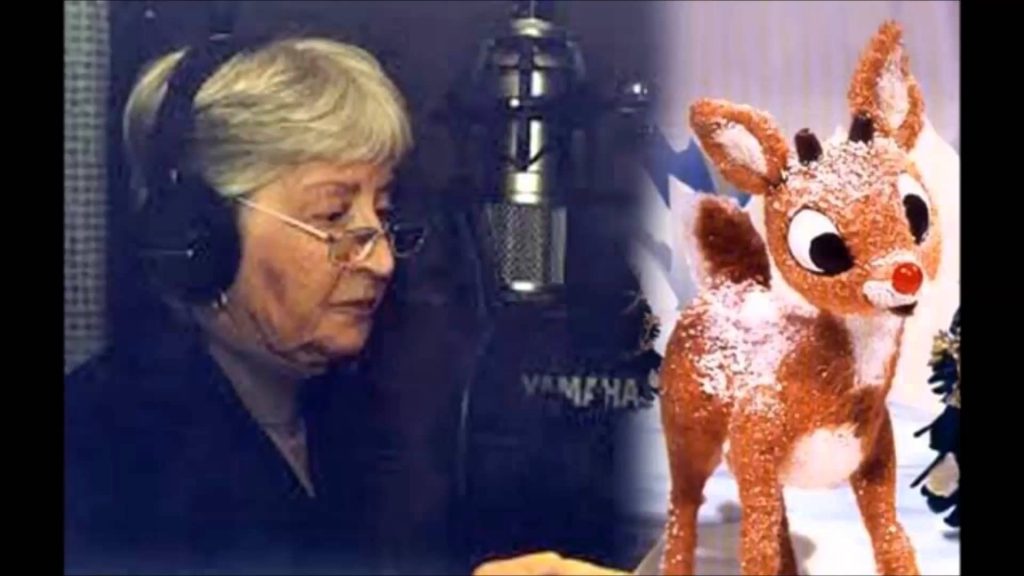 Billie Mae Richards (Rudolph) is best known for voicing Rankin/Bass’ version of the character Rudolph the Red-Nosed Reindeer from 1964 to 1979. She also voiced Tenderheart Bear in the first two Care Bears movies, as well as the DIC-produced television series (credited as “Billie Mae Richard”), and Brightheart Raccoon in the Nelvana-produced Care Bears television series.  Richards’ four other appearances in Rankin-Bass productions animated were in Willie McBean and his Magic Machine, The King Kong Show, The Smokey Bear Show and The Daydreamer (both from the mid-1960’s) and Rudolph the Red-Nosed Reindeer and its sequels all written in the United States and animated in Japan. About that same time, she appeared in the original Spider-Man television series. She also voiced all the female characters in The Undersea Adventures of Captain Nemo and The Toothbrush Family with Len Carlson, who voiced all the male ones.  She made guest appearances on the television shows Maniac Mansion, My Secret Identity, War of the Worlds and The Hidden Room. She also had a bit part in the 1998 horror film Bram Stoker’s Shadow Builder, in which her character was attacked with an ax by Paul Soles (who had played Hermey the elf in the original Rudolph special), and the 2001 short Bluehair.

Burl Ives (Snowman) was born June 14, 1909, and passed away April 14, 1995.  He was an American folk singer and actor of stage, screen, radio and television.  He began as an itinerant singer and banjoist, and launched his own radio show, The Wayfaring Stranger, which popularized traditional folk songs. In 1942, he appeared in Irving Berlin’s This Is the Army, and then became a major star of CBS radio. In the 1960’s, he successfully crossed over into country music, recording hits such as “A Little Bitty Tear” and “Funny Way of Laughing”. A popular film actor through the late 1940’s and 1950’s, Ives’s best-known roles in that medium included parts in So Dear to My Heart and Cat on a Hot Tin Roof, as well as Rufus Hannassey in The Big Country, for which he won an Academy Award for Best Supporting Actor.  Ives was a lifelong supporter of the Boy Scouts of America.

Rudolph – Did You Know? 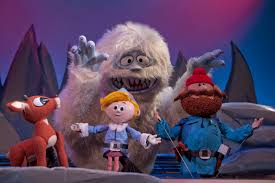 I can’t wait to watch Rudolph with my kids. It was one of my favorite movies.

It’s always a hit with my family! 🙂

I need to watch all of these with my 8 year old. I don’t believe he has seen it

He would definitely enjoy it. I think I love it more than my son, though! 🙂

Thanks for sharing! Need to watch this video again. My favorite part is the Did You Know? section; that could be a blog post onto itself!

Thanks Calli. That’s why I love doing these posts. Finding out new information that is so great to share is fun!! 🙂

It’s a great show. I think I love it more than our son does!! ha/ha

I vaguely remember when it first came out-I was around 14 at the time! I still watch it on occasion and now I have that song running around in my head!!!!!