When you hear the word Genesis, what do you think of? Some people in today’s world automatically think of a band or something else. Not many automatically focus on the Word of God and it being the beginning of His Book.  I’ll follow with some more on what the book is actually about.

The author of the book of Genesis is not identified. Traditionally, the author has always assumed to have been Moses. There is no conclusive reason to deny the Mosaic authorship of Genesis.

Date of Writing: The Book of Genesis does not state when it was written. The date of authorship is likely between 1440 and 1400 B.C., between the time Moses led the Israelites out of Egypt and his death.

Purpose of Writing: The Book of Genesis has sometimes been called the “seed-plot” of the entire Bible. Most of the major doctrines in the Bible are introduced in “seed” form in the Book of Genesis. Along with the fall of man, God’s promise of salvation or redemption is recorded (Genesis 3:15). The doctrines of creation, imputation of sin, justification, atonement, depravity, wrath, grace, sovereignty, responsibility, and many more are all addressed in this book of origins called Genesis.

Many of the great questions of life are answered in Genesis:

Genesis appeals to the scientist, the historian, the theologian, the housewife, the farmer, the traveler, and the man or woman of God. It is a fitting beginning for God’s story of His plan for mankind, the Bible.

The overriding theme of Genesis is God’s eternal existence and His creation of the world. There is no effort on the part of the author to defend the existence of God; he simply states that God is, always was, and always will be, almighty over all. In the same way, we have confidence in the truths of Genesis, despite the claims of those who would deny them. All people, regardless of culture, nationality or language, are accountable to the Creator. But because of sin, introduced into the world at the Fall, we are separated from Him. But through one small nation, Israel, God’s redemptive plan for mankind was revealed and made available to all. We rejoice in that plan. God created the universe, the earth, and every living being. We can trust Him to handle the concerns in our lives. God can take a hopeless situation, e.g. Abraham and Sarah being childless, and do amazing things if we will simply trust and obey. Terrible and unjust things may happen in our lives, as with Joseph, but God will always bring about a greater good if we have faith in Him and His sovereign plan. “And we know that all things work together for good to them that love God, to them who are the called according to his purpose” (Romans 8:28).*

The story of Genesis is so important and I’m so blessed to know that Nolan Lebovitz took the time and made the change in his life to let others know so much more about it with the “Roadmap Genesis” movie!

Here’s a preview of what the movie is about:

Roadmap Genesis is a film documentary that makes the case that the Book of Genesis is a roadmap containing guideposts on how to live a productive, fruitful, and fulfilling life that will help our society lift itself out of its current decline and return it to prosperity, promise, and accomplishment.

When Filmmaker Nolan Lebovitz found himself at a crossroads in his life, he knew he had to choose between continuing to make the Hollywood suspense thrillers that were his livelihood and trying to make the world a better place for his new young family. After much struggle, he found his answer in the Book of Genesis.

Armed with this discovery, Nolan made a drastic life change. He decided to study to become a Rabbi. As his seminary work progressed, he realized that he needed to share his epiphany with others. But how?

Roadmap Genesis invites Americans of all faiths to engage in a dialogue about the relevance of the Bible in the modern age. Through interviews ranging from Gov. Mike Huckabee of Fox News Channel to Rabbi David Wolpe, from Alan Dershowitz to the Archbishop of Chicago Cardinal Francis George, from Erick Stakelbeck of the Christian Broadcasting Network to Ken Ham of Answers in Genesis and the Creation Museum, and many, many more, Nolan explores the rules that God has set forth to help us maintain a successful and working society.

Nolan Lebovitz was born and raised in the suburbs outside of Chicago.  His life goal was to move to Hollywood and become a movie director – so he relocated west to attend the USC School of Cinema-Television. After graduation, he began writing suspense thrillers and ultimately scored a hit in 2008 with “Tortured” starring Laurence Fishburne, Cole Hauser and James Cromwell.

In the midst of living his childhood dream, something changed.  Nolan got married and had children. He began to question the world around him, and started looking for answers. He found the answers in the Book of Genesis, and made a drastic life change – He decided to become a Rabbi.

In 2011, Nolan began attending the Ziegler School for Rabbinic Studies at American Jewish University.  In 2013, he lived in Jerusalem and attended the Conservative Yeshiva.  Currently, Nolan is back at Ziegler and plans on ordination at the end of next academic year.

In late 2012, Nolan decided to merge his two passions – filmmaking and Bible study –  and began making “Roadmap Genesis”.  “Roadmap Genesis” is a film documentary that makes the case that the Book of Genesis remains more relevant today than ever.  Genesis addresses all of the issues we face in our society today.  The film displays a variety of sermons — a buffet of opinions by American clergy and public figures speaking about the relevance of Genesis.  The movie will invite Americans of faith and socially conscious Americans to engage in a dialogue about the Bible.  The interviews include Gov. Mike Huckabee of Fox News Channel, Rabbi David Wolpe, Alan Dershowitz, the Archbishop of Chicago Cardinal Francis George, Erick Stakelbeck of the Christian Broadcasting Network, Pastor Ken Ham of Answers in Genesis and the Creation Museum amongst many, many more.

Nolan has served for the last several years as the Rabbinic Intern at Sinai Temple in Los Angeles.  He has also enjoyed writing a blog for JewishJournal.com, which is titled “Israel, Torah and Me”.  It has been picked up several times and included in the print edition as well. Nolan is married to his wife Blair, and they have two children and are expecting another literally any day. 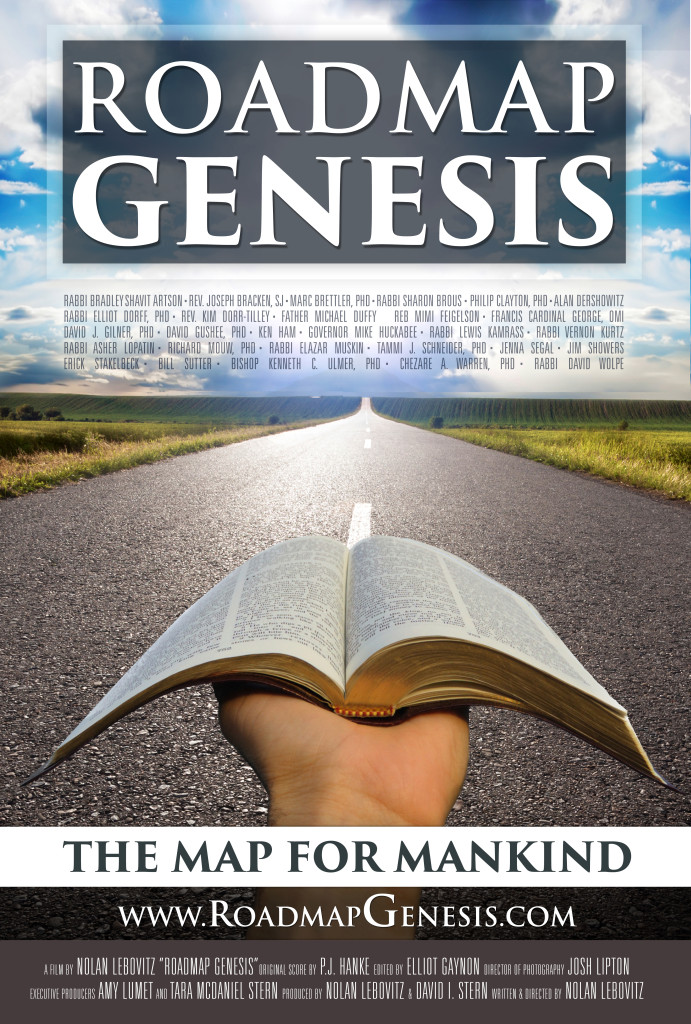