Skip to content
I participated in the Neil Diamond Melody Road album review program as a member of One2One Network. I was provided a free album to review but all opinions are my own.

I got to review the new album coming out from the legendary “Neil Diamond” and felt like he was never away from my stereo.

His music is timeless, and you just feel how he is feeling when he sings – I love musicians that are real in their craft.  It’s so great that even at his age, he is not letting his talent just sit and not be used.

I was so glad to get this email from the One2One Network about this upcoming album release.  I actually still have Neil’s song “Coming to America” on the MP3 player in my car.  I rock out to it often, and always play it on the 4th of July!!

I can’t wait to hear everyone’s review of his new album – it looks to make a mark on the music industry, even after so much time has gone by.

Okay everyone, sing it with me, and then get ready to enjoy more with the album detailed below: 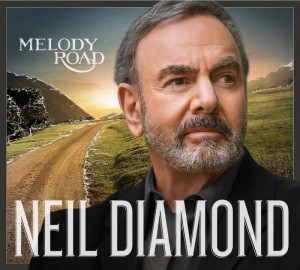 Melody Road is Neil Diamond’s debut album as an artist signed to Capitol Records.  His 32nd studio album, it is the first album of original music Diamond has recorded since 2008’s well-received Home Before Dark, which debuted on the US album charts at #1.  It was produced by Don Was and “Jacknife” Lee.

After 40 years recording for Columbia, Diamond signed with Capitol in early 2014. At the same time, his back catalog was moved to Universal Music Group, Capitol’s parent company. Capitol released Diamond’s 1980 soundtrack album for The Jazz Singer.

On September 8, 2014, six of the tracks from Melody Road were premiered at the Capitol Records studios in Hollywood, CA at a listening party for a small group of music industry executives and journalists. Following the event, Billboard wrote that the album is “rich in orchestration that retains the dark rustic qualities of his last two studio albums of original material, 12 Songs and Home Before Dark. Of the songs, the article stated that “‘Something Blue’, the most commercial of the songs played Monday, has the classic Diamond mid-tempo lilt; the ballads ‘The Art of Love’ and ‘(Ooo) Do I Wanna Be Yours’ offer springboards for Diamond’s still-potent voice; and ‘Seongah and Jimmy’ is a eyewitness account of a romance between a woman from Korea and a man from Long Island.”  The Wall Street Journal wrote that “The Art of Love” is a “tender offering from Diamond, who at age 73, hasn’t lost that ability to convey a wide swath of emotions in just four minutes.”

In September, three videos from the album were released. A lyric video for “The Art of Love” debuted on Diamond’s YouTube/VEVO channel, and the video for the album’s first single, “Something Blue”, premiered on Yahoo! Music.  Rolling Stone debuted the video for “Nothing But a Heartache”.

Get A Copy For Your Family:

Here’s a Discount, Too: 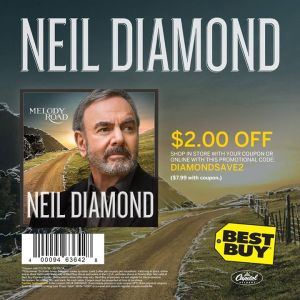 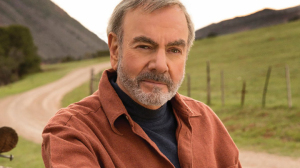 Neil Leslie Diamond (born January 24, 1941) is an American singer-songwriter with a career that began in the 1960’s. Diamond has sold over 125 million records worldwide, making him one of the world’s best-selling artists of all time.  He is the third most successful adult contemporary artist on the Billboard charts behind Barbra Streisand and Elton John.  His songs have been covered internationally by many performers from various musical genres.

Neil Diamond was inducted into the Songwriters Hall of Fame in 1984 and into the Rock and Roll Hall of Fame in 2011. Additionally, he received the Sammy Cahn Lifetime Achievement Award in 2000 and in 2011 was an honoree at Kennedy Center. On the Hot 100 and Adult Contemporary charts, he has had ten No. 1 singles: “Cracklin’ Rosie”, “Song Sung Blue”, “Longfellow Serenade”, “I’ve Been This Way Before”, “If You Know What I Mean”, “Desiree”, “You Don’t Bring Me Flowers”, “America”, “Yesterday’s Songs”, “Heartlight” and “I’m a Believer”. He continues to record and release new material and maintains an extensive touring schedule as well.

Great to hear something new from Neil Diamond. Can’t wait to hear more of his new material. He sounds a good as ever. Something Blue will be playing on my iPod soon.
Lynn

Jamie, I enjoy getting your Tiger Strypes Blog. Last time I listened to Elvis’ G I Blues album in entirety. I was a fan after I saw the movie. Had the album (and all his albums) and he was my first pin up poster when I was a kid. Tonight I turned up the volume full blast listening to Neil Diamond’s America. He was another favorite of mine. Now I’ll get back to the rest of your postings.
Thanks so much.
Lynn

Thanks for stopping by Lynn – I always have new posts, so be sure to check back often…and enter to win in my giveaways!! Have a great day!!