So Much Fun at LEGO KidsFest Phoenix

I recently received some tickets for the 2015 LEGO KidsFest from #USFG (UsFamilyGuide) for blogging about the event.  My son is a LEGO fanatic – he builds all kinds of things and has loved these toys for many years.  We’ve never been able to go to a KidsFest before, so the boys couldn’t wait!! I let my husband and son use the tickets and they invited a friend and his Dad to have a “Guys Day”…or so they said!!

The event was about 3.5 hours away from our home, so the Dad’s took the day off of work and started driving.  The arrived at the event and every one of them said that they loved it!!  So many fun things to do and see.

Here are some photos of their fun trip – again, thanks you LEGO and #USFamilyGuide for letting my guys have such a great time!!

The LEGO® KidsFest kicks off its seventh year on the road with a stop in Phoenix in February, 2015.  The award-winning LEGO KidsFest will feature new activities, popular favorites featured in interactive event running from Feb. 27 – March 1, 2015 at Glendale’s University of Phoenix Stadium.

Those who attended the previous show can once again expect hands-on building, creative experiences and one-of-a-kind activities. Children of all ages and builders of all skills and levels are welcome. 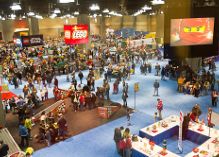 “We’re thrilled to be returning to the Phoenix area,” said Vince Rubino, LEGO Events Manager. “We’ve got a host of new activities as well as some areas we know are very popular with our fans. Not only will families create some new memories at the show, they’ll get another chance to flex and showcase their building skills.” 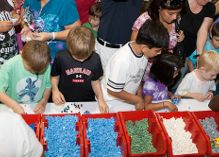 Five identical sessions are available for the three-day tour stop. LEGO KidsFest tickets are $22.50 for adults and $19.50 for children and can be purchased online at http://www.legokidsfest.com.

On tour since 2009, previous LEGO KidsFest tour stops have included major cities such as Chicago, Boston, Atlanta, San Jose, Cleveland, Houston, Detroit and more. Tickets generally sell out and attendance averages 27,000 visitors at each venue. To date, more than 700,000 have enjoyed more than 35 LEGO KidsFest shows. In 2014, the tour made its first stop in Alberta, Canada, selling out a week before the show.

In 2013, LEGO KidsFest was awarded Best Proprietary Event by Event Marketer Magazine. LEGO KidsFest is managed by BuzzEngine, an event and marketing agency.

Some of the activities at the shows include:

Based on sell-out attendance in previous markets, advance ticket purchase is strongly encouraged. Tickets for all 2015 tour stops are on sale at www.LEGOkidsfest.com.

The LEGO KidsFest is a traveling LEGOextravaganza featuring millions of LEGO bricks and dozens of hands-on educational and fun building activities for all ages. It features dozens of life-sized LEGO models and displays, LEGO brand building areas, the Big Brick Pile, race ramps and more, all covering three acres of space.

oh my gosh, I can’t even imagine a Lego Fest. What fun!!! my youngest daughter was a huge Lego fan. I kept it all for her even though she is in college. It was such fun watching her build creations. The Lego Fest would have been on my list of places to go!

I so want to visit here. It would be so much fun

What an awesome way for Father and Son to spend the day. Even better that you had an extra ticket for a friend. Lego clubs are huge, I’m learning. We even have a club in our little town.

How fun – I never heard of a LEGO club, that would be a great idea!!

My kids went to a Lego store for the first time last spring in Nashville. They loved it and would have spent the whole night there. I can’t imagine how tall they’d be walking after a day at Lego Kidsfest!

My boys would be so happy to go to this. They love Legos.