Skip to content
Thank you Level3Digital for partnering with me on this blog post & for the great giveaway!

Jeremy Camp Movie – I Still Believe Review
#BELIEVEL3 #TigerStrypesBlog
I had been hearing about the new I Still Believe movie for months!! I couldn’t wait to see it with my friends and family. Well, right after it was released at our local theater, the COVID stuff happened, and the theater was shut down in our small mountain town. I missed it!! 🙁 …or so I thought! Level3Digital stepped up and helped me to finally be able to enjoy it with my family at home. A huge thank you to them for making this happen for us!

I’ve been a Jeremy Camp fan for years. I have listened to his music, and actually got to volunteer at his merchandise table for the Rock and Worship Roadshow in 2013. I never got to actually meet him, but it was still fun!! Hearing the story of his life, and the things he had been through – while still coming back to God was huge! I couldn’t imagine going through the loss of a loved one at his young age. What a spirit for the Lord, he must have had hidden in his heart. Seeing where he has gone, and what he has done for the glory of the Lord, just shows that we can get through anything with just a little bit of prayer and love from others!

The movie itself, was amazing! I loved how it showed that if you want something, and are willing to work, you could get it.  Seeing Jeremy as a young adult and the things that he went through, really make me feel more for the words of his songs.  I’m sure this movie will be a blessing to many, and maybe help some that are going through the things that he did, have some hope.  Seeing how God can work through just a few people, really makes you wonder just what you can do for yourself and others!

The movie is now available online for you, too! Find out how you can get it below.

Have you seen the new I Still Believe movie about @JeremyCamp? I got to view it, thanks to LEV3Ldigital and loved it!! Find out more at #TigerStrypesBlog #Review #Giveaway #BELIEVEL3 Click To Tweet

We also had a chance to experience this exclusive Q&A video with artist Jeremy Camp! A few of us submitted our questions for Jeremy, and he answered them in this video!!  We asked him about the film, about his music, about his life… about his source of Hope… all types of things.  Let me know in the comments what you thought about the video.

About the I Still Believe Movie: 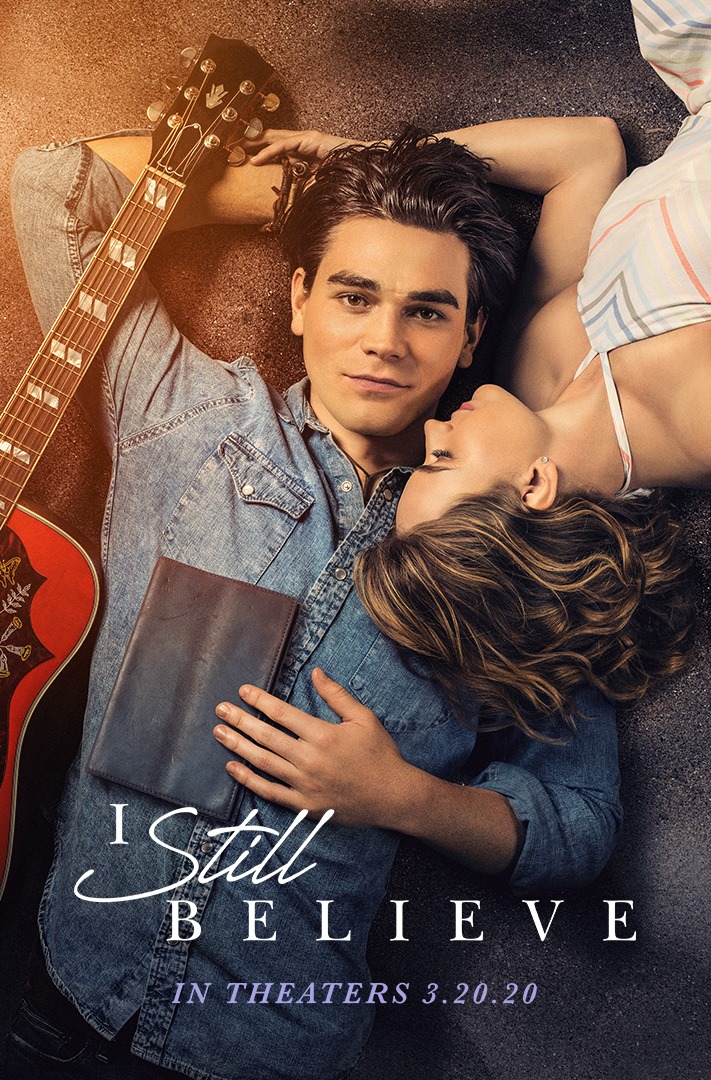 I Still Believe is a 2020 American Christian musical romantic drama film directed by the Erwin Brothers and starring KJ Apa, Britt Robertson, Shania Twain, Melissa Roxburgh and Gary Sinise. It is based on the life of American contemporary Christian music singer-songwriter Jeremy Camp and his first wife, Melissa Lynn Henning-Camp, who was diagnosed with ovarian cancer shortly before they married. Camp’s song “I Still Believe” is the film’s namesake.

In Lafayette, Indiana, September 1999, Jeremy Camp (KJ Apa) departs for Calvary Chapel College in Murrieta, California. The night of his arrival, he goes to a concert of Canadian Christian band, the Kry, where he meets the lead singer, Jean-Luc LaJoie (Daniel Parsons), who become fast friends with Jeremy, who comes to him for musical advice. After the concert, Jeremy meets Melissa Henning (Britt Robertson), a fellow student at his school, and friend of Jean-Luc, who loves Melissa, but Melissa does not reciprocate the feeling. The pair get to know each other, and quickly begin dating, causing a rift among Jeremy, Melissa, and Jean-Luc. As a result, Melissa ends her relationship with Jeremy.

Jeremy goes back to his family in Indiana for Christmas break. A few days after Christmas, Jeremy receives a phone call from Jean-Luc, saying that Melissa is sick, and asks Jeremy to come back to California. Upon his arrival, Jeremy visits Melissa in the hospital, who tells him that she has been diagnosed with Stage 3C cancer in her liver. She also tells Jeremy that she loves him. Jeremy says the same, and proposes to her. She accepts.

During this time, Jeremy begins to make a name for himself as a Christian singer-songwriter. Melissa learns that the cancer has spread to her ovaries, and that she needs a surgery that will leave her infertile. After the surgery was supposed to happen, Melissa wakes up to Jeremy, who tells her the surgery was canceled because she is now cancer-free. Six months later, Jeremy and Melissa wed. Everything seems perfect until after their honeymoon, Melissa wakes up in pain. Jeremy takes her to the hospital, where they find out her cancer has returned, and that nothing more can be done for her.

As Melissa grows weaker, Jeremy begins to question his faith in God. In the hospital, Jeremy sings a song he wrote (Walk By Faith) during their honeymoon. Melissa dies shortly after. Jeremy becomes angry at God, and chooses to abandon his musical career, smashing his guitar until it breaks. Inside it, he finds a note Melissa left for him to find after her death, telling him that suffering does not damage faith, but strengthen it, and encouraging him to continue writing songs. Two years later, Jeremy performs a song he wrote after Melissa’s death (I Still Believe) about his suffering, but eventually restored faith.

After the concert, he meets a girl named Adrienne (Abigail Cowens), who tells Jeremy that she lost someone close to her, and she was angry at God, and his songs changed her life. The film ends with Jeremy promising to share Melissa’s story, believing that God will use it to change lives. The credits reveal that Jeremy and Adrienne got married in 2003, and have three children. 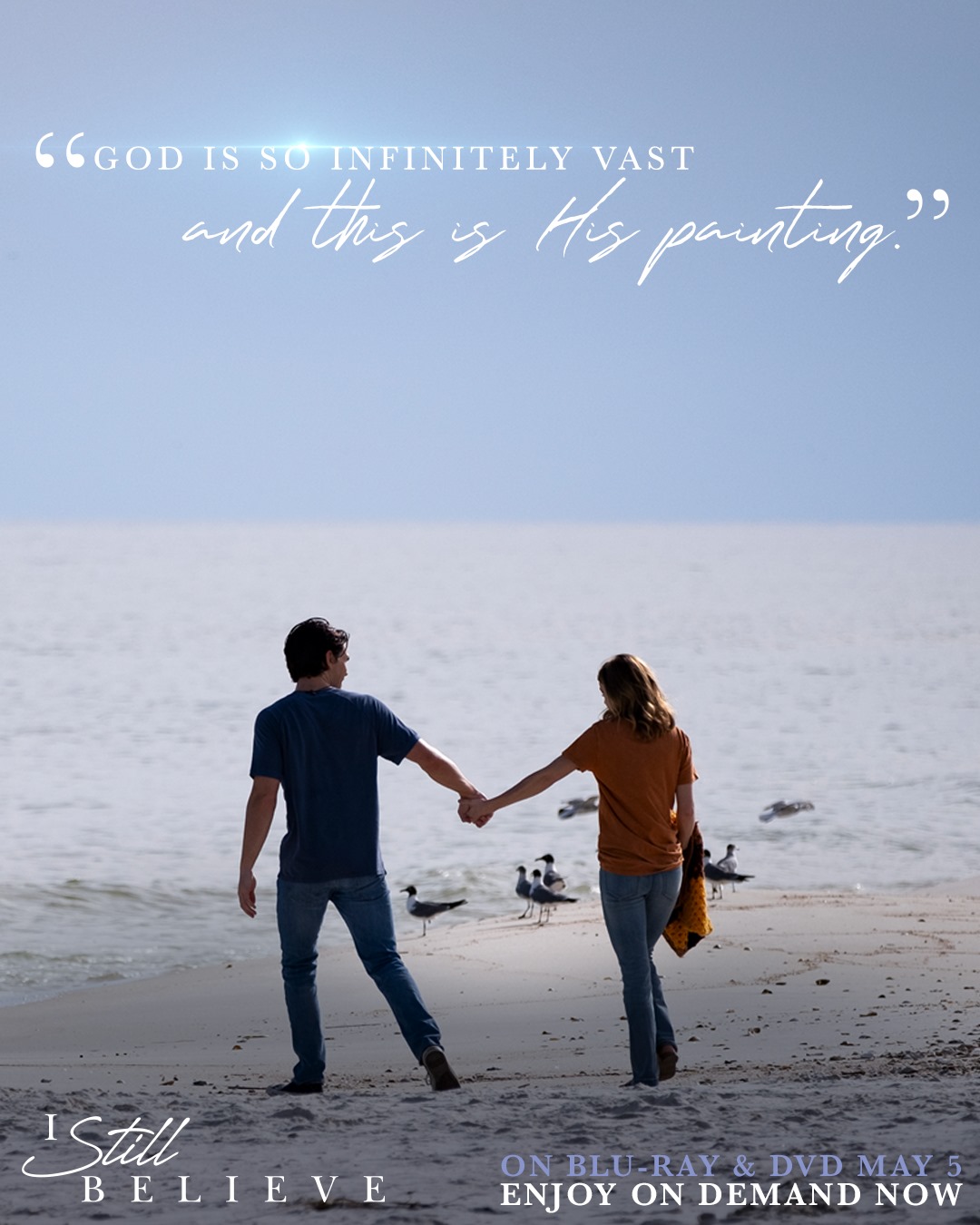 Connect With The Jeremy Camp Movie:

Just wanted to say, Thank You! My family is going to love watching this movie together. What a blessing to be picked as the winner for “I Still Believe.” We love Jeremy’s music and it will be so awesome to see how he got his start in Christian music. ❤️

You’re welcome Lori – thanks for stopping by. You are going to love this movie. Have some tissue ready, though.

I enjoyed the faith and music in the movie!

That was definitely a few of the bonus parts! 🙂

I’ve heard of this before and I haven’t seen the trailer yet but that sounds like a wonderful movie to watch. I can’t wait to see this someday.

It’s definitely worth renting, when it comes out!

I haven’t seen it but it’s on my list to watch! Love it even more after I read your post!

My husband and I really loved it!

Oh wow, this seems like a great DVD to have. Seems like the songs are pretty relaxing. Love those with good lyrics.

It’s amazing. I love all of Jeremy’s music! 🙂

I’ve been a fan of Jeremy Camp’s music for a long time and have seen him live but only know some of his story. This would be great to see the movie and learn more.

The words to his songs mean a lot more now, I’ll tell you. 🙂

That sounds like a great movie to watch! Would love to see it!

It definitely was – great story!

I’ve been following Jeremy Camp since 2003 when my friends and I went and saw him in concert in a little club in San Diego. I love his music and his life has been so inspiring. I had no idea Shania Twain was in the movie. I really need to make some time to watch this. I had hoped to see it in the theater like you, but it never happened. 🙁

I was so sad when we couldn’t support it in the theater. Watching it at home was good though, we needed tissues. 🙂

I have been wanting to see this movie. I know I’m going to bawl like a baby.

The tears are worth it, though. Makes you know that you can get through anything with prayer!

This sounds like such an amazing movie. I actually just got a code to watch it today, so I’m looking forward to seeing it. I’m sure it’s going to be amazing.

It is a wonderful story, for sure.

I haven’t heard of this one, but it’s exactly the kind of movie that my oldest and I love to watch together!

The story is amazing. Really makes you think.

It is great that you have learned the life and tribulations of your favorite musician.

He sure has an amazing story!

This looks cute, I’ll have to check it out!

This looks really inspiring. I actually had not heard of it but would be great to see.

It is a great story, for sure. Makes you respect people a bit more, when you see the story behind the star sometimes, you know?

Missed seeing this at the theater and really wanted to. Will have to add to our home library!

It was definitely a great movie! What this guy went through at such a young age, makes me respect him even more.

This looks really good. I can’t wait to check it out.

It’s a great movie!! Might not be for the little ones, though – with some of the sad parts. 🙁

I loved reading parts of the story here in your post because I never had a chance to see this movie in theaters either. Looks like a great one for family movie night.

I was so sad when the movies closed, like the day after this came out!! So blessed that I got to see it!

This movie looks so good. I love Jeremy Camp. I bet I will need a ton of tissues though. Those are my kind of movies!

My husband and I were definitely using tissues last night! Amazing story, though and worth it!