I got an email from Elliott with Edify Media and was asked to watch the “In Plain Sight” movie and review it.  He kind of started his email with “this is a bit different than usual”, so I wasn’t really sure what it would be about.  Learning about the problems with how girls and women are used in this country alone was mind-blowing.  You always hear about other countries doing things such as trafficking and bad things such as that, but rarely do you realize how rampant it is in our own country.  It’s sad to think that so many don’t have a voice, and aren’t able to speak up and know that they are worth so much more than they are being told.

This movie shows a few that have been able to get away from that lifestyle with the help of “Hope For Justice” and other organizations that help these women know that there are other options.  Hearing the stories and seeing some of the things being done, really makes you thankful that you live in a country that is home to the people with these great hearts.  The ones that want to make a difference and help out their “sister”.  Seeing how God is using normal people to change lives, was a blessing.  I pray that one day, we won’t have to worry about things like this going on.  Granted, in today’s world, that “one day” will probably be when God calls us Home.

Check out the information below about the documentary.  Also, if you, or someone you know is struggling with anything such as trafficking, domestic violence, or anything, there are links below that might be able to help.  I pray that those that need it, will take that step and feel the hand of God leading the way!

STORIES OF HOPE AND FREEDOM

Executive Produced and Narrated by Natalie Grant
RELEASED TO DVD on January 13th, 2015

Stories of Hope and Freedom features six modern-day abolitionists as they fight sex trafficking across America. Premieres are scheduled around the nation in during January 2015. Journeying to six US cities, the documentary opens the viewer’s eyes to what’s happening down the street “in plain sight”. Through engaging interviews with numerous victims of sex trafficking, the force, coercion, and deception of the children and women becomes apparent. In the 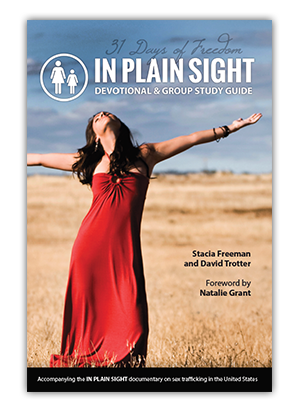 midst of the darkness, stories of hope and freedom emerge as each survivor shares how she was impacted through the work of a sex trafficking aftercare home.

“Most Americans are completely oblivious to the fact that thousands of women and children are enslaved within their own communities,” said David Trotter, co-executive producer. “This isn’t limited to Las Vegas, Los Angeles, and New York. We’re talking about cities across America – from Sacramento to Little Rock to Baltimore – where the unthinkable is happening.”

“The reality is that children are being ravaged day in and day out. If you have a heart beating on the inside of you, I don’t understand how this couldn’t be important to you,” said Natalie Grant, narrator and co-executive producer.

With a focus on educating the American public and motivating people to take action, the campaign centers around three resources to be released by Word Entertainment. The DVD, music album, and 31 Day Devotional & Group Study Guide will be available in stores nationwide on December 23rd, 2014.

“In Plain Sight” is an inspiring documentary featuring the work of six female abolitionists as they fight against sex trafficking in the United States. Journeying to six US cities, the film opens the viewer’s eyes to what’s happening down the street ‘in plain sight.’ Through engaging interviews with numerous victims of sex trafficking, the force, coercion, and deception of the children and women becomes apparent. In the midst of the darkness, stories of hope and freedom emerge as each survivor shares how she was impacted through the work of a sex trafficking aftercare home founded by one of the featured abolitionists.

If You Need Help, Here Are Some Options:

Disclaimer: I, Jamie Tomkins, own and operate Tiger Strypes Blog located at www.tigerstrypes.com. From time to time you’ll hear about my real life experiences with products and/or services from companies and individuals. Let it be known that I have no affiliation with these said companies, and have not received compensation for reviewing their service/product. The service/product was given to me by the company or any agents of the company. The review that I give regarding the product/service is based off my own personal experience; I do not guarantee that your experience will be the same.

Sounds like a powerful and touching movie. Thanks for sharing at the #HomeMattersParty 🙂 Hope to see you again next week.