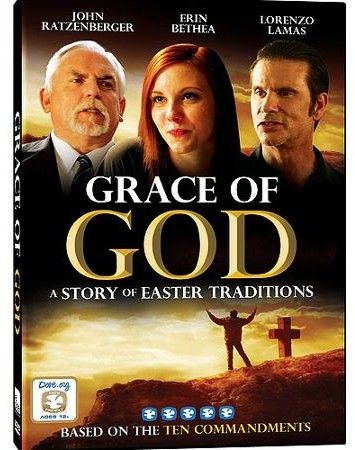 Grace of God
A Story of Easter Traditions

I received “Grace of God” from Laura Beth with FlyByPromotions to watch with my family and give our review. We watched the movie last night and thought it had some great stories.  There was a bit of confusion with how it started and ended, but that might just be me.

The movie had a great story of life, sin, forgiveness and love.  The characters were amazing and seeing that a “regular” person can receive God’s love is something that I pray will help many to realize that they don’t have to be perfect to be loved by our Lord.  Each of the characters had their own story, but in the end, the exclamation point of their life is the love of God.  So many times, especially in today’s world, we look around and wonder if our beliefs are still strong and if the things we have learned are not right.  I thank God often that it is by His grace that we are saved, and has nothing to do with anything I’ve done, will do or try to do, to earn it….can’t be done!

Ephesians 2:8 says, “For by grace we are saved, through faith, and that not of ourselves.” The only way any of us can enter into a relationship with God is because of His grace toward us. Grace began in the Garden of Eden when God killed an animal to cover the sin of Adam and Eve (Genesis 3:21). He could have ended the lives of the first humans right there for their disobedience. But rather than destroy them, He chose to make a way for them to be right with Him. That pattern of grace continued throughout the Old Testament when God instituted blood sacrifices as a means to atone for sinful men. It was not the blood of those sacrifices that cleansed sinners; it was the grace of God that forgave those who trusted in Him (Hebrews 10:4; Genesis 15:6).

God shows both mercy and grace, but they are not the same. Mercy withholds a punishment we deserve; grace gives a blessing we don’t deserve. Consider this illustration: you were stopped in your old clunker for going 60 mph in a school zone. The ticket is high, and you can’t pay it. You appear before the judge with nothing to say for yourself. He hears your case and then, to your surprise, he cancels your fine. That is mercy. But the judge doesn’t stop there. He walks you outside and hands you the keys to a new car. That is grace.

Grace is God giving the greatest treasure to the least deserving—which is every one of us!!  That’s what this movie shows, we can be forgiven and we can be used for His glory in any circumstance.

Detective Bill Broadly, who lost his faith years ago, is called to investigate the disappearance of the local church’s collection plate. As he questions its various church members, rumors swirl as more congregants learn about the theft.

When one unexpected church-goer confesses to stealing the funds, the confession resurrects Broadly’s views about God, and helps him see that through faith and belief there really is rebirth and redemption. 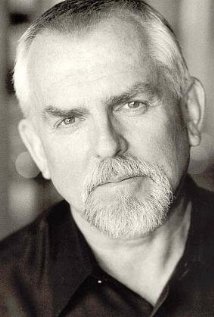 the long-running NBC sitcom “Cheers.” Prior to creating his character on Cheers, john lived overseas for 10 years and has worked as a carpenter, archery instructor, and deck hand on a fishing boat. He produced and starred in the Travel Channel series “Made in America,” which highlighted U.S.-made goods and workers. He is passionate about how important it is for this country to recognize the need for, and to provide the training to produce skilled laborers.  “My mother used to give me old radios and toasters, with the cords cut off,” said Ratzenberger. “She told us to take them apart. Growing up, everyone we knew could make something, and knew how to fix things. We are losing that and we need to get it back.”  “Kids today are not making things,” he said. “Instead they are going to college to get degrees and can’t get a job. There are plenty of jobs out there. We just need to teach kids the skills. Many today, do not even know how to use simple tools, hammers and screwdrivers. Manufacturers today say high school kids can’t even read a ruler. How are they going to build airplanes, build homes, or even perform simple household repairs?”  He is an American actor, voice actor, and entrepreneur. He is best known for his role as Cliff Clavin in Cheers and his recurring supporting/minor cast roles in Pixar films. Collectively his films have grossed the sixth most of any actor in history.  John Ratzenberger started the improvisational comedy group, “Sal’s Meat Market”, in Bridgeport, Connecticut, while a student at Sacred Heart University, located in Fairfield/Bridgeport, Connecticut. He was later affiliated with the ensemble group, “The Downtown Cabaret”. Coincidentally, he was a friend of Susan Ryan, the mother of Meg Ryan. A mutual friend, also associated with “The Downtown Cabaret”, was the daughter-in-law of actress Mabel Albertson, the sister of actor Jack Albertson.

Erin Bethea (born on August 12, 1982) in Georgia, USA.  Erin Bethea is a professional actress born and raised in South Georgia. Born with a love 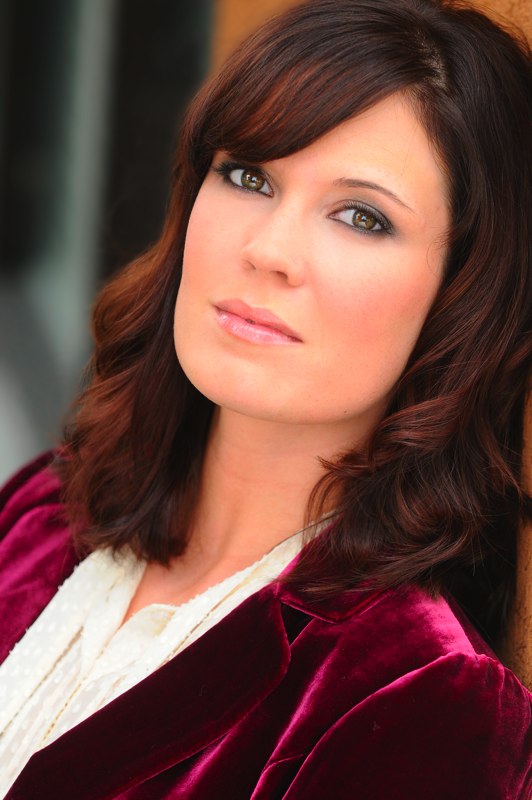 of performing, she began her career after graduating from the University of Mobile with a Bachelor of Arts in Theater. She made her screen debut in a small role as sportscaster Alicia Houston in the surprise success Christian film Facing the Giants.  In pursuit of a career in live theater, she went on to work as a performer for Walt Disney World in Orlando, FL where she spent nearly 8 years appearing in various shows across property and became a proud member of the Actors’ Equity Association. During her time at Disney, her career took a major and unexpected turn back toward film as she was cast in the lead role of Catherine Holt in the hit film Fireproof opposite veteran actor Kirk Cameron. The #1 Independent movie of 2008, Fireproof opened at #4 in the box office. Currently, Erin is busy with more feature films preparing to be released, including Atlar Egos, a comedy also starring Robert Amaya (Courageous). She has also added a new role to her résumé as a producer wth her new production company, Argentum Entertainment. Through producing her own content, Erin hopes to bring quality movies to a broader audience and inspire seekers of entertainment everywhere!  Erin currently resides in Los Angeles, California.

Lorenzo Lamas(born January 20, 1958) is the son of Arlene Dahl and Fernando Lamas – was raised in Pacific Palisades, California In 1968 his journey family moved to New York. He attended private school, graduating from Admiral 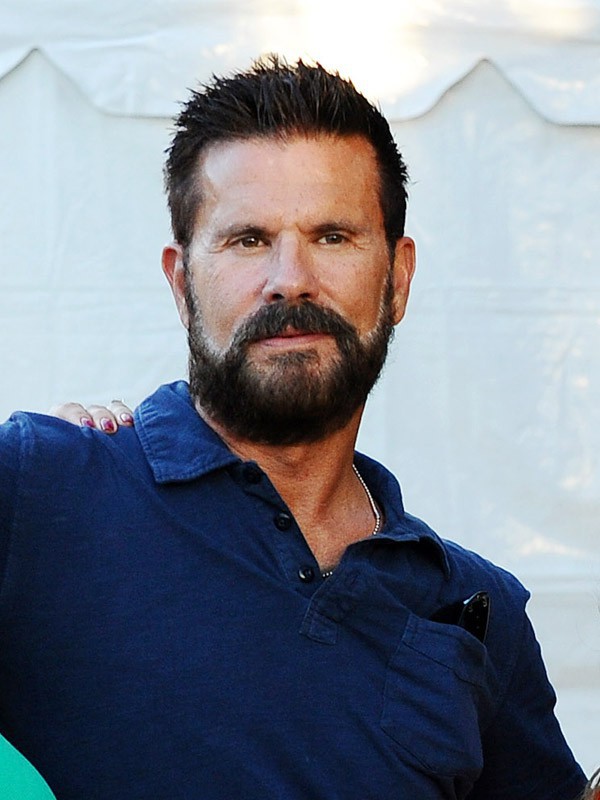 Farragut Academy in 1975. He then moved back to California. With encouragement from his father, he enrolled in Tony Barr’s Film Actors Workshop and began his career with a small role in a television show in 1976. He also began to study karate and tae kwon do in 1979. He has starred in five television series and in over fifty movies. He is most known for his roles on television, notably as Lance Cumson on CBS’ Falcon Crest and Reno Raines in the syndicated hit show Renegade. Lorenzo also sustained a professional racing career while working successfully as a TV and Film actor in the 80’s and 90’s. He acts on stage and has a cabaret show that he tours with across the country. Some of the roles he has played onstage include the king in the musical The King and I as well as Zach in the musical A Chorus Line. He is an avid motorcyclist for over thirty years and has participated in the Love Ride, to benefit MDA and various charities since its inception in 1983. He is also on the board of directors. Lorenzo is a commercial helicopter and airplane pilot and he often flies disadvantaged children to summer camps and people too sick or financially challenged to travel normally on domestic flights. He just recently received his certification to become a helicopter flight instructor. In 2009, Lorenzo met his wife Shawna Craig who he asked to marry just three short months later. They are still happily married.

Get One For Your Family Now:

“Disclosure (in accordance with the FTC’s 16 CFR, Part 255: “Guides Concerning the Use of Endorsements and Testimonials in Advertising”): Many thanks to Propeller Consulting, LLC for providing this prize for the giveaway. Choice of winners and opinions are 100% my own and NOT influenced by monetary compensation. I did receive a sample of the product in exchange for this review and post. Only one entrant per mailing address, per giveaway. If you have won a prize from our sponsor Propeller / FlyBy Promotions in the last 30 days, you are not eligible to win. If you have won the same prize on another blog, you are not eligible to win it again. Winner is subject to eligibility verification.”

I watched this DVD. It is a very good movie

My whole family loves that John Ratzenberger has had a small part in all the Pixar movies! We like trying to “find” him!

So true!! He didn’t have much of a part of this one, but still did a great job! 🙂

Love how your review is so detailed and how you describe the difference between Grace and Mercy. Sounds like a movie I’d want to watch with my family. Thanks for the giveaway!

Thanks for stopping by!! Be sure to let your friends know to enter! 🙂

Easter is a special holiday that I love to celebrate. I love John Ratzenberger in cheers