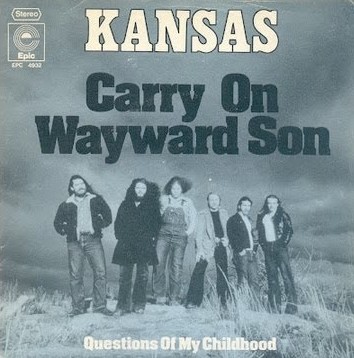 So to get on with this “Things That Brings Back Memories” blog post for this week, I’m going to pick “Carry On Wayward Son” by Kansas, which was released in 1976, and became a “Top 40” in 1977.  If you don’t know about the song that I’m talking about, here it is:

The song “Carry On Wayward Son” was a favorite of mine.  Even, sitting down to post this and playing the video above, my son said “Is that your phone?”, since I have it as a ringtone still to this day!!  It’s one that just never gets old, and sounds great turned up really loud in my car!! 🙂  So, is there a song that brings back great memories for you? Leave a comment below, and let me know. 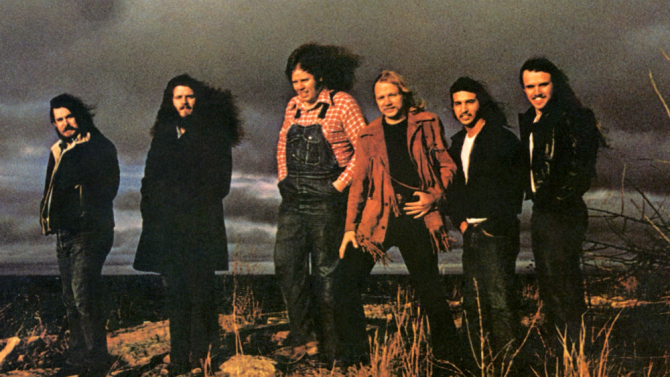 More Info on the “Carry On Wayward Son” Song:

“Carry On Wayward Son” is a single recorded by Kansas and written by Kerry Livgren for their 1976 album Leftoverture. In 1977, the song peaked at No. 11 on the Billboard Hot 100, becoming their first Top 40 hit.

The 7″ single has been certified Gold by the R.I.A.A. This version was a much shorter version of the song, edited down to 3:26, a version that was also the band’s only single to chart in the UK, reaching number 51 there.  All initial releases of the single had a B-side of “Questions of My Childhood”. The song was later re-released on the Kansas compilation albums The Best of Kansas, On the Other Side, The Kansas Boxed Set, The Ultimate Kansas, and Sail On: The 30th Anniversary Collection. It was also included on the live Kansas albums Two for the Show, Live at the Whisky, King Biscuit Flower Hour Presents Kansas, Dust in the Wind, Device, Voice, Drum, and There’s Know Place Like Home, along with the DVD companions to Device, Voice, Drum and There’s Know Place Like Home.  This song is 96th on VH1’s 100 Greatest Hard Rock Songs.

The next time the guys in Kansas lay their weary heads to rest, they can dream about a fresh stream of royalties from “Carry On Wayward Son.”  The song, is heard in a new commercial for Miller Lite that shows a karaoke enthusiast strolling into a liquor store and awkwardly trying to show off for the guy behind the counter by belting out the “Wayward Son” refrain — just before another customer walks in.

The commercial comes during a busy year for the veteran rockers, who announced the departure of singer Steve Walsh last summer and have since been “carrying on” with the new singer Ronnie Platt (formerly of Shooting Star). They’ve also been promoting Miracles Out of Nowhere, a new documentary and CD devoted to Kansas’ early years and streak of hit records during the ’70s.

Kansas is a progressive rock band that formed in Topeka, Kansas, United States in 1970. The band is best known for their international hit singles “Carry On Wayward Son” and “Dust in the Wind”, from 1976 and 1977 respectively.

The debut album, ‘Kansas’, was released in March 1974, nearly a year after it was recorded in New York. It defined the band’s signature sound, being comprised of a mix of American-style boogie rock with complex, symphonic arrangements featuring changing time signatures similar to British art rockers. Steinhardt’s violin was a distinctive element of the group’s sound, which set them apart from other progressive rock groups of the era. The band slowly developed a cult following, due to promotion by pop/rock impresario Don Kirshner and extensive touring for their debut album. Two follow-ups, ‘Song for America’ and ‘Masque’, both came out in 1975 and brought them additional acclaim, the releases showing the band’s philosophical-based lyricism in songs such as the myth-inspired “Icarus (Born On Wings Of Steel)”.

Kansas released its fourth album, ‘Leftoverture’, in November 1976, which produced a massive hit single in “Carry On Wayward Son” and brought comparisons to other records such as Yes’ ‘Fragile’. The aforementioned tune has became a kind of ‘signature song’ for the band and been a staple of rock radio for years, also appearing in various TV shows and video games. Kansas’ follow-up, ‘Point of Know Return’, was released in October 1977. Featuring the title track and “Dust in the Wind”, both hit singles, it received critical praise from many reviewers.

‘Leftoverture’ and ‘Point of Know Return’ each have sold over four million copies in the U.S. Both “Carry On Wayward Son” and “Dust in the Wind” have also been RIAA certified as gold singles, selling over one million units each. In particular,”Dust in the Wind” was certified gold as a digital download in 2005, almost 30 years after its first run, having sold over one million copies as a single. Forming somewhat of a career high point, ‘Leftoverture’ was certified five times platinum by the RIAA in 2001. 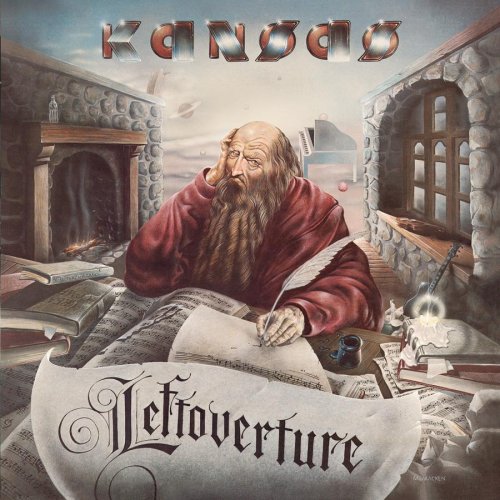 During this period, Kansas became a major headlining act and sold out the largest venues available to rock bands at the time, including New York’s Madison Square Garden. The band documented this era in 1978 with ‘Two for the Show’, a double live album of recordings from various performances from its 1977 and 1978 tours. The band gained a solid reputation for faithful live reproduction of their studio recordings. In 1978, the band was named UNICEF Deputy Ambassadors of Goodwill as well.

Kansas’ band members began to drift apart in the early 1980’s. Livgren became a born-again Christian, and this was reflected in his lyrics on the next three albums, beginning with Audio-Visions. “Hold On,” a Top 40 single from that album, displayed his new-found faith in a pop setting. Hope soon converted to Christianity as well. Walsh left in October 1981 to form a new band, Streets. In early 1982, Walsh was replaced by vocalist/keyboardist John Elefante, a born-again Christian who was chosen over other applicants including Sammy Hagar and Doug Pinnick. Elefante and brother Dino Elefante were later successful producers for contemporary Christian artists, including Sweet Comfort Band, Petra, Bride, Rick Cua, and Guardian.
Kansas’ first album with Elefante, Vinyl Confessions, released in June 1982, was their most successful studio release since Point of Know Return. The record renewed interest in the group and generated the band’s first Top 20 hit in several years, “Play the Game Tonight.” The album’s overtly Christian lyrics attracted an entirely new audience. Still, sales of the album fell short of gold status, and the album has yet to be certified gold.
Drastic Measures followed in 1983. Because Livgren was holding back some Christian-oriented songs for another solo album, he contributed only three songs to the album. The rest were penned by the Elefante brothers, and without the violin of Steinhardt (who left the group before the recording sessions), the result was a more mainstream pop-rock album. The single, “Fight Fire with Fire,” did not crack the Top 40 on the Billboard Hot 100 but reached #3 on the Billboard Mainstream Rock chart, making it the highest chart position of any Kansas release on any chart.

In 2000 Kansas was the opening act for Yes during their “Masterworks” tour. In 2002, Kansas II (the lineup prior to the recording and release of Kansas’ first album) released an album under the group name Proto-Kaw, featuring demos and live material recorded from 1971 to 1973. This led to a new studio album, Before Became After (2004), with most of the Kansas II members participating. Proto-Kaw released a third album, The Wait of Glory, in 2006.

Kansas has continued to tour every year. The 2006 tour was delayed for a few weeks due to Steinhardt’s second departure, and Ragsdale subsequently returned to the lineup. In 2008, the Kansas website announced that four of the five current members (Ehart, Ragsdale, Williams and Greer) had formed a recording group called Native Window, and they released their self-titled debut album in June 2009.

As of July 13, 2010, Kansas had recently completed a 30-day “United We Rock” tour with fellow classic rock legends Styx and Foreigner.
Kansas will be touring September 2010 to January 2011. They will be performing with Symphonies of various colleges around the U.S. in an effort to raise money for the individual schools’ music programs. The final show of the series, on January 28, 2011, is to be performed at McCain Auditorium on the campus of Kansas State University to commemorate the 150th anniversary of the state of Kansas being granted statehood. The concert will be filmed by PBS to be used in a future broadcast special in the region. Kansas will perform live on stage at the Glasgow, Kentucky Kentucky Plaza Theater on Friday May 13, 2011. 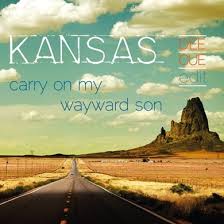 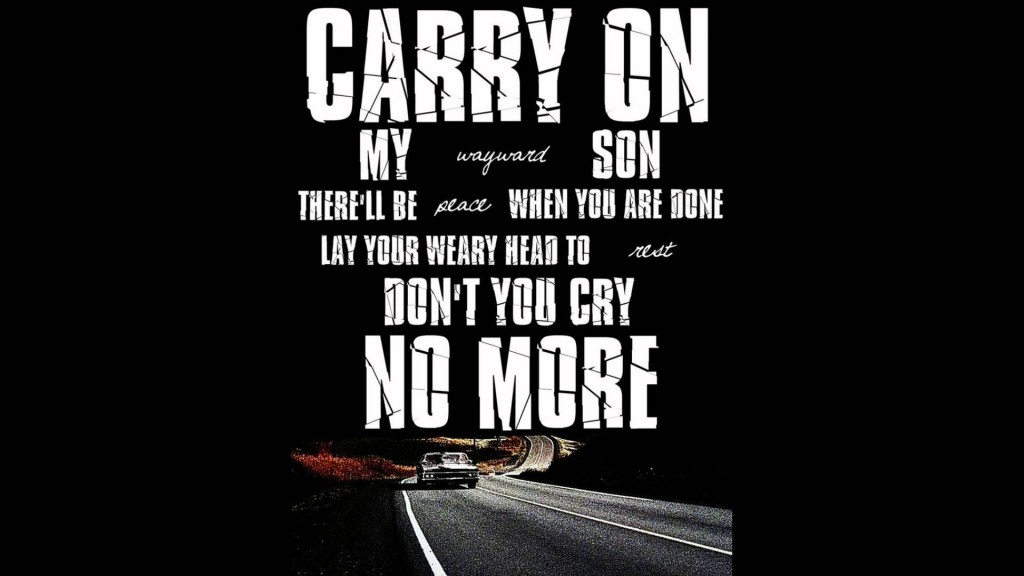 I love this song! And I agree, music has a way of bringing back memories in vivid detail!

Thank you for sharing with us at #mommymeetupmondays!

You’re welcome – thanks for stopping by!

I’m not familiar with this band, but the song does sound familiar. It could be I’ve heard it in the Miller Lite commerical. Thanks for sharing!

Cracks me up how the songs I grew up with are being used for ads. :p

I remember this, such a great song! It’s a good one to listen to in a car ride.

Yeah, until the person next to you looks over and sees you singing!! ha/ha

I remember this song. My husband still plays their music.

They are one, who’s music will never grow old! 🙂